We consider the problem of localization of Poisson source by the observations of inhomogeneous Poisson processes. We suppose that there are k detectors on the plane and each detector provides the observations of Poisson processes whose intensity functions depend on the position of the emitter. We describe the properties of the maximum likelihood and Bayesian estimators. We show that under regularity conditions these estimators are consistent, asymptotically normal and asymptotically efficient. Then we propose some simple consistent estimators and this estimators are further used to construct asymptotically efficient One-step MLE-process. 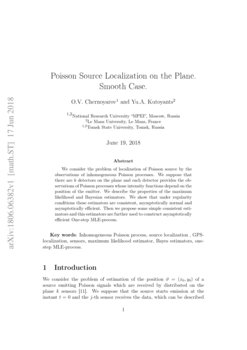 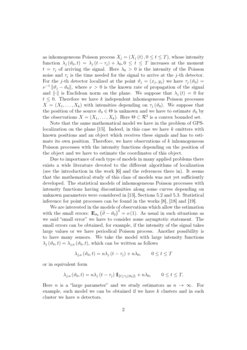 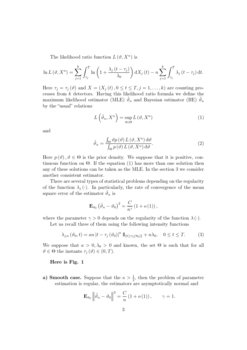 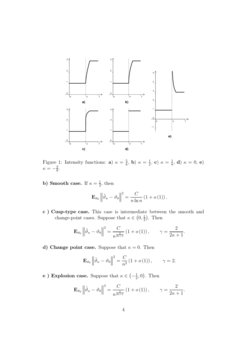 We consider the problem of estimation of the position ϑ=(x0,y0) of a source emitting Poisson signals which are received by distributed on the plane k sensors [11]. We suppose that the source starts emission at the instant t=0 and the j-th sensor receives the data, which can be described as inhomogeneous Poisson process Xj=(Xj(t),0≤t≤T), whose intensity function λj(ϑ0,t)=λj(t−τj)+λ0,0≤t≤T

increases at the moment

t=τj of arriving the signal. Here λ0>0 is the intensity of the Poisson noise and τj is the time needed for the signal to arrive at the j-th detector. For the j-th detector localized at the point ϑj=(xj,yj) we have τj(ϑ0)=ν−1∥∥ϑj−ϑ0∥∥, where ν>0 is the known rate of propagation of the signal and ∥⋅∥ is Euclidean norm on the plane. We suppose that λj(t)=0 for t≤0. Therefore we have k independent inhomogeneous Poisson processes X=(X1,…,Xk) with intensities depending on τj(ϑ0). We suppose that the position of the source ϑ0∈Θ is unknown and we have to estimate ϑ0 by the observations X=(X1,…,Xk). Here Θ⊂R2 is a convex bounded set.

Note that the same mathematical model we have in the problem of GPS-localization on the plane [15]. Indeed, in this case we have k emitters with known positions and an object which receives these signals and has to estimate its own position. Therefore, we have observations of k inhomogeneous Poisson processes with the intensity functions depending on the position of the object and we have to estimate the coordinates of this object.

Due to importance of such type of models in many applied problems there exists a wide literature devoted to the different algorithms of localization (see the introduction in the work [6] and the references there in). It seems that the mathematical study of this class of models was not yet sufficiently developed. The statistical models of inhomogeneous Poisson processes with intensity functions having discontinuities along some curves depending on unknown parameters were considered in [13], Sections 5.2 and 5.3. Statistical inference for point processes can be found in the works [8], [18] and [19].

We are interested in the models of observations which allow the estimation with the small errors: Eϑ0(¯ϑ−ϑ0)2=o(1). As usual in such situations as we said “small error” we have to consider some asymptotic statement. The small errors can be obtained, for example, if the intensity of the signal takes large values or we have periodical Poisson process. Another possibility is to have many sensors. We take the model with large intensity functions λj(ϑ0,t)=λj,n(ϑ0,t), which can be written as follows

or in equivalent form

Here n is a “large parameter” and we study estimators as n→∞. For example, such model we can be obtained if we have k clusters and in each cluster we have n detectors.

The likelihood ratio function L(ϑ,Xn) is

Here τj=τj(ϑ) and X=(Xj(t),0≤t≤T,j=1,…,k) are counting processes from k detectors. Having this likelihood ratio formula we define the maximum likelihood estimator (MLE) ^ϑn and Bayesian estimator (BE) ~ϑn by the “usual” relations

Here p(ϑ),ϑ∈Θ is the prior density. We suppose that it is positive, continuous function on Θ. If the equation (1) has more than one solution then any of these solutions can be taken as the MLE. In the section 3 we consider another consistent estimator.

There are several types of statistical problems depending on the regularity of the function λj(⋅). In particularly, the rate of convergence of the mean square error of the estimator ¯ϑn is

where the parameter γ>0 depends on the regularity of the function λ(⋅).

Let us recall three of them using the following intensity functions

Suppose that the κ>12, then the problem of parameter estimation is regular, the estimators are asymptotically normal and

This case is intermediate between the smooth and change-point cases. Suppose that κ∈(0,12). Then

Suppose that κ=0. Then

The smooth case a) is studied in this work. See as well the work [1], where the similar model was considered. The case b) is discussed below in the Section 4. For the Cusp case c) see [4], [2]. The change-point case d) is studied in [6]. The Explosion case d) can be done using the technique developed in [5].

Suppose that there exists a source at some point ϑ0=(x0,y0)∈Θ⊂R2 and k≥3 sensors (detectors) on the same plane located at the points ϑj=(xj,yj),j=1,…,k. The source was activated at the (known) instant t=0 and the signals from the source (inhomogeneous Poisson processes) are registered by all k detectors. The signal arrives at the j-th detector at the instant τj. Of course, τj=τj(ϑ0) is the time necessary for the signal to arrive in the j-th detector defined by the relation

where ν>0 is the known speed of propagation of the signal and ∥⋅∥ is the Euclidean norm (distance) in R2.

The intensity function of the Poisson process Xnj=(Xj(t),0≤t≤T) registered by the j-th detector is

Recall that λ′j(t−τj)=0 for 0≤t≤τj and note that ⟨a,b⟩ϑ and ∥a∥ϑ are formally the scalar product and the norm in Rk

Regularity conditions R. R1. For all j=1,…,k the functions

R4. There are at least three detectors which are not on the same line.

Remark, that if all detectors are on the same line, then the consistent identification is impossible because the same signals come from the symmetric with respect to this line possible locations of the source.

According to Lemma 1 below the family of measures (P(n)ϑ,ϑ∈Θ) induced by the Poisson processes Xn=(Xn1,…,Xnk) in the space of their realizations is locally asymptotically normal and therefore we have the following minimax Hajek-Le Cam’s lower boud on the mean square errors of all estimators ¯ϑn: for any ϑ0∈Θ

We call the estimator ¯ϑn asymptotically efficient, if for all ϑ0∈Θ we have the equality

Let the conditions R be fulfilled then the MLE ^ϑn and BE ~ϑn are uniformly consistent, asymptotically normal

where ζ∼N(0,I(ϑ0)−1) and the both estimators are asymptotically efficient.

Proof. The proof of this theorem is based on two general results by Ibragimov and Khasminskii [7] presented in the Theorems 1.10.1 and 1.10.2. We have to check the conditions of these theorems given in terms of normalized likelihood ratio

Suppose that we already proved the weak convergence

Then the limit distributions of the mentioned estimators are obtained as follows (see [7]). Below we change the variables ϑ=ϑ0+u√n and B⊂R2 is a bounded set.

For the MLE we have

It is easy to see that ζ=argmaxuZ(u)

For the BE we have (once more we change the variables θu=ϑ0+u√n):

The properties of the Zn(u) required in the Theorems 1.10.1 and 1.10.2 [7] are checked in the three lemmas below. Remind that this approach to the study of the properties of these estimators was applied in [12], [13]. Here we use some obtained there inequalities.

Introduce the vector of partial derivatives

Let the conditions R be fulfilled, then the family of measures {Pϑ,ϑ∈Θ} is locally asymptotically normal (LAN), i.e., the random process Zn(u),u∈Un for any ϑ0∈Θ admits the representation

Using the Taylor formula we obtain the relations

Therefore we can write

These equalities justify the introduced above form of the Fisher information matrix I(ϑ0).

We have the representations

Therefore we obtained (4). To verify the convergence (5) we introduce the vector In=(I1,n,I2,n), where

where the vectors a,b∈Rk. Then the asymptotic normality of In

follows from the central limit theorem for stochastic integrals. See, e.g., Theorem 1.1 in

where Wj(⋅),j=1,…,k are independent Wiener processes and

The conditions of this theorem can be easily verified for the corresponding vectors a,b given by the presentation Δn(ϑ,Xn).

Let the condition R2 be fulfilled, then there exists a constant C>0, which does not depend on n such that for any R>0

Proof. The proof of this lemma follows from the proof of the Lemma 2.2 in [13] if we put there m=2. The difference between the models of observations there and here is not essential for the presented there proof.

Let the conditions R be fulfilled, then there exists a constant κ>0, which does not depend on n such that

Therefore we have the equality

By Taylor formula for ∥h∥≤δ we can write