LiDAR point cloud streams are usually sparse in time dimension, which is limited by hardware performance. Generally, the frame rates of mechanical LiDAR sensors are 10 to 20 Hz, which is much lower than other commonly used sensors like cameras. To overcome the temporal limitations of LiDAR sensors, a novel task named Point Cloud Frame Interpolation is studied in this paper. Given two consecutive point cloud frames, Point Cloud Frame Interpolation aims to generate intermediate frame(s) between them. To achieve that, we propose a novel framework, namely Point Cloud Frame Interpolation Network (PointINet). Based on the proposed method, the low frame rate point cloud streams can be upsampled to higher frame rates. We start by estimating bi-directional 3D scene flow between the two point clouds and then warp them to the given time step based on the 3D scene flow. To fuse the two warped frames and generate intermediate point cloud(s), we propose a novel learning-based points fusion module, which simultaneously takes two warped point clouds into consideration. We design both quantitative and qualitative experiments to evaluate the performance of the point cloud frame interpolation method and extensive experiments on two large scale outdoor LiDAR datasets demonstrate the effectiveness of the proposed PointINet. Our code is available at https://github.com/ispc-lab/PointINet.git. 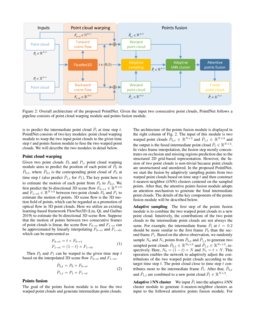 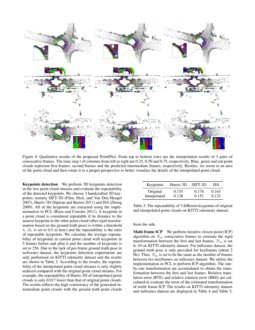 Increasing the density of the 3D LiDAR point cloud is appealing for many...
Kaicheng Zhang, et al. ∙

LiDAR is one of the most important sensors in numerous applications (e.g., autonomous vehicles and intelligent robots). However, the frame rates of typical mechanical LiDAR sensors (e.g., Velodyne HDL-64E, Hesai Pandar64, etc.) are greatly limited by hardware performance. Frame rates of LiDAR are generally 10 to 20 Hz, which contributes to temporal and spatial discontinuity of point cloud streams. Compared with the low frame rate of LiDAR, the frame rates of other commonly used sensors on intelligent vehicles and robots are typically much higher. For example, the frame rate of cameras and Inertial Measurement Unit (IMU) can achieve over 100 Hz. The large difference in frame rate can cause difficulty to synchronize LiDAR with other sensors. Upsampling low frame rate LiDAR point cloud streams to higher frame rates can be an efficient solution to that Liu et al. (2020). Besides, higher frame rate may enhance the performance of several applications like object tracking Kiani Galoogahi et al. (2017). It is worth noting that video frame interpolation is commonly utilized to generate high frame rate videos from low frame rate ones Jiang et al. (2018) (e.g., from 30 Hz to 240 Hz). Compared to the success of video frame interpolation, frame interpolation of 3D point clouds has not been well explored. Therefore, it is needed to explore frame interpolation algorithms for 3D point clouds to overcome the temporal limitations of LiDAR sensors.

To summarize, our main contributions are as follows:

In this section, we first introduce the overall architecture of the proposed point cloud frame interpolation network (PointINet) and then explain the details of the two key components of PointINet, namely point cloud warping module and points fusion module.

Then P0 and P1 can be warped to the given time step t based on the interpolated 3D scene flow F0→t and F1→t,

We input ~Pt into the adaptive kNN cluster module to generate k-nearest-neighbor clusters as input to the followed attentive points fusion module. For each point in ~Pt, we search for K nearest neighbors in two warped point clouds ^P0,t and ^P1,t. Similar to adaptive sampling, the number of neighbors in ^P0,t and ^P1,t are also adaptively adjusted according to t to balance the contributions of two point clouds. Thus, we query K0 neighbors in ^P0,t and K1 neighbors in ^P1,t, where K0=(1−t)×K and K1=t×K. As a result, we obtain N clusters and each cluster consists of K neighbor points. Denoting the center point of a cluster as xi and the neighbor points as {xi1,⋯,xik,⋯,xiK}∈RK×3. Then each neighbor point is subtracted by the center point as (xik−xi) to obtain the relative position of neighbor points in a cluster. Besides, the Euclidean distance between neighbor point and the center point ∥∥xik−xi∥∥2 is calculated as an additional channel of the cluster. Consequently, the final feature of a single cluster can be denoted as Fi={fi1,⋯,fik,⋯,fiK}∈RK×4.

of a single cluster into a shared multi layer perceptron (Shared-MLP) to generate a feature map. Then the followed maxpool layer and a Softmax function are applied to predict one-dimensional attentive weights

Wi={wi1,⋯,wik,⋯,wiK}∈RK×1 for all neighbor points in the cluster. After that, the new point ^xi can be represented as the weighted sum of the neighbor points,

We perform both qualitative and quantitative experiments to demonstrate the performance of the proposed method. Besides, we also perform experiments on two applications (i.e., keypoints detection and multi frame Iterative Closest Point (ICP)) to better evaluate the quality of the generated intermediate point clouds.

We start by training FlowNet3D on Flythings3D dataset Mayer et al. (2016) and then refine the network on KITTI scene flow dataset Menze and Geiger (2015). We directly use the data pre-processed by Liu, Qi, and Guibas (2019) to train FlowNet3D. Then we further refine the pre-trained FlowNet3D on KITTI odometry dataset and nuScenes dataset, respectively. During this procedure, the current frame with a randomly selected frame within Ns frames before and after it are used as a training pair. Then the first frame is warped to the second frame with the predicted scene flow and the chamfer distance (see Eq. 4) between the warped point cloud and the second point cloud is adopted as the loss function to supervise the refinement of FlowNet3D. After that, the weight of FlowNet3D is fixed when training the followed points fusion module. During the training of the points fusion module, two consecutive frames and a randomly sampled frame from the 4 intermediate point clouds with the corresponding time step are utilized as a training sample. We randomly downsample the point clouds to 16384 points during training and the number of neighbor points K is set to 32 in our implementation. The channels of the layers of Shared-MLP in attentive points fusion module are set to [64,64,128]

. All of the network is implemented using PyTorch

Paszke et al. (2019) and Adam is used as the optimizer. Besides, the points fusion module is only trained on KITTI odometry dataset and we simply generalize the trained model to nuScenes dataset for evaluation.

We evaluate the similarity and consistency between the generated point clouds and the ground truth ones on the downsampled point cloud streams using two evaluation metrics: Chamfer distance (CD) and Earth mover’s distance (EMD). CD is previously described in Eq.

4. EMD is also a commonly used metric to compare two point clouds Weng et al. (2020), which is implemented by solving a linear assignment problem. Given two point clouds ^Pt∈RN×3 and Pt∈RN×3, EMD can be calculated as

where ϕ:^Pt→Pt is a bijection.

The CD and EMD of the proposed PointINet and other baselines on KITTI odometry dataset and nuScenes dataset are shown in Table 1 and Table 2, respectively. According to the results, the performance of our method significantly outperforms other baselines. For example, the chamfer distance of the proposed PointINet is about 1/3, 3/5 and 2/3 of Identity, Align-ICP and Scene flow on KITTI odometry dataset, respectively. It is worth noting that our method is superior to Scene flow by an obvious margin, which also reflects the effectiveness of the points fusion module. Noting that we only train the points fusion module on KITTI odometry dataset and the results on nuScenes dataset also demonstrate the generalization ability of the network.

We perform iterative closest point (ICP) algorithm on Nm consecutive frames to estimate the rigid transformation between the first and last frames. Nm is set to 10 on KITTI odometry dataset. For nuScenes dataset, the ground truth pose is only provided for keyframes (about 2 Hz). Thus, Nm

is set to be the same as the number of frames between two keyframes on nuScenes dataset. We utilize the implementation in PCL to perform ICP algorithm. The one-by-one transformation are accumulated to obtain the transformation between the first and last frames. Relative translation error (RTE) and relative rotation error (RRE) are calculated to evaluate the error of the estimated transformation of multi frame ICP. The results on KITTI odometry dataset and nuScenes dataset are displayed in Table

4 and Table 5, respectively. We also calculate the difference between the errors of original and interpolated point cloud streams and display the results in right column of Table 4 and Table 5 for better comparison. According to the results, the RTE and RRE of the multi-frame ICP algorithm on the interpolated point cloud streams are very close to that on original point cloud streams. For example, The RTE on nuScenes dataset of the two results differs by only 0.07 m according to Table 5. The close performance indicates the similarity between the generated intermediate point clouds with the ground truth ones.

The efficiency of the proposed PointINet is evaluated on a PC with NVIDIA Geforce RTX 2060 and the average runtime to generate one intermediate frame for point clouds contain 16384, 32768 and 65536 points are displayed in Table 6. According to the results, most of the runtime is used to warp the point cloud and the proposed points fusion module requires relatively little time for computation. However, the computation time for points fusion module increases with the number of points due to the per-point computation for fusion. Overall, the proposed PointINet can efficiently generate intermediate frames.

We perform several ablation studies to analyze the effect of different components of the proposed PointINet (e.g., adaptive sampling, adaptive kNN cluster and attentive points fusion) to the final results. The experimental setting is consistent with the quantitative experiments and we also use chamfer distance (CD) and earth mover’s distance (EMD) to evaluate the performance. All of the ablation studies are performed on KITTI odometry dataset.

We query K/2 neighbor points from the two warped point clouds fixedly rather than query points based on time step t. According to the results displayed in third row of Table 7, the CD and EMD without adaptive kNN cluster increase from 0.457 to 0.534 and 39.46 to 41.66, respectively. The results prove the effectiveness of the adaptive kNN cluster module.

In this paper, a novel task named Point Cloud Frame Interpolation is studied and a learning-based framework PointINet is designed for this task. Given two consecutive point clouds, the task aims to predict temporally and spatially consistent intermediate frames between them. Consequently, low frame rate point cloud streams can be upsampled to high frame rates using the proposed method. To achieve that, we utilize an existing scene flow estimation network for motion estimation and then warp the two point clouds to the given time step. Then a novel learning-based points fusion module is presented to efficiently fuse the two point clouds. We design both qualitative and quantitative experiments for this task. Extensive experiments on KITTI odometry dataset and nuScenes dataset demonstrate the performance and effectiveness of the proposed PointINet.

The proposed point cloud frame interpolation method may have positive effects on the development of autonomous driving and intelligent robots, which can reduce the workload of human drivers and workers and also the incidence of traffic accidents. However, this development may also bring unemployment of human drivers and workers. Besides, the proposed method may have potential military applications like military unmanned aerial vehicles, which can threaten the safety of humans. We should explore more applications which can improve the quality of human life rather than harmful ones.

This work is funded by National Natural Science Foundation of China (No. 61906138), the European Union’s Horizon 2020 Framework Programme for Research and Innovation under the Specific Grant Agreement No. 945539 (Human Brain Project SGA3), and the Shanghai AI Innovation Development Program 2018.