Event sequences can be modeled by temporal point processes (TPPs) to capture their asynchronous and probabilistic nature. We contribute an intensity-free framework that directly models the point process as a non-parametric distribution by utilizing normalizing flows. This approach is capable of capturing highly complex temporal distributions and does not rely on restrictive parametric forms. Comparisons with state-of-the-art baseline models on both synthetic and challenging real-life datasets show that the proposed framework is effective at modeling the stochasticity of discrete event sequences. 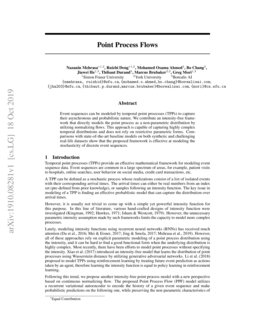 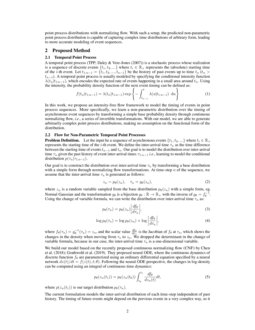 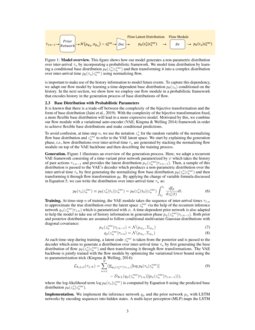 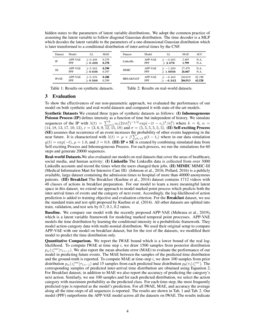 A TPP can be defined as a stochastic process whose realizations consist of a list of isolated events with their corresponding arrival times. The arrival times can either be real numbers from an index set (pre-defined from prior knowledge), or samples following an intensity function. The key issue in modeling of a TPP is finding an effective probablistic model that can capture the distribution over arrival times.

However, it is usually not trivial to come up with a simple yet powerful intensity function for this purpose. In this line of literature, various hand-crafted designs of intensity function were investigated (Kingman, 1992; Hawkes, 1971; Isham & Westcott, 1979). However, the unnecessary parametric intensity assumption made by such frameworks limits the capacity to model more complex processes.

Following this trend, we propose another intensity-free point process model with a new perspective based on continuous normalizing flow. The proposed Point Process Flow (PPF) model utilizes a recurrent variational autoencoder to encode the history of a given event sequence and make probabilistic predictions on the following one, while preserving the non-parametric characteristics of point process distributions with normalizing flow. With such a setup, the predicted non-parametric point process distribution is capable of capturing complex time distributions of arbitrary form, leading to more accurate modeling of event sequences.

A temporal point process (TPP; Daley & Vere-Jones (2007)) is a stochastic process whose realization is a sequence of discrete events {t1,t2,...} where ti∈R+ represents the (absolute) starting time of the i-th event. Let t1:n−1={t1,t2,...,tn−1} be the history of past events up to time tn (tn>tn−1). A temporal point process is usually modeled by specifying the conditional intensity function λ(tn|t1:n−1), which encodes the expected rate of events happening in a small area around tn

. Using the intensity, the probability density function of the next event timing can be defined as:

In this work, we propose an intensity-free flow framework to model the timing of events in point process sequences. More specifically, we learn a non-parametric distribution over the timing of asynchronous event sequences by transforming a simple base probability density through continuous normalizing flow, i.e., a series of invertible transformations. With our model, we are able to generate arbitrarily complex point process distributions, making no assumption on the functional form of the distribution.

is a random variable sampled from the base distribution

pθ(zn) with a simple form, eg. Normal Gaussian and the transformation gθ is a bijection gθ:R→R+ with the inverse of gθ=f−1θ. Using the change of variable formula, we can write the distribution over inter-arrival time τn as:

where fθ(τn)=g−1θ(τn)=zn, and the scalar value dfθdτn is the Jacobian of fθ at τn, which shows the changes in the density when moving from τn to zn. We dropped the determinant in the change of variable formula, because in our case, the inter-arrival time τn is a one-dimensional variable.

We build our model based on the recently proposed continuous normalizing flow (CNF) by Chen et al. (2018); Grathwohl et al. (2019). They proposed neural ODE, where the continuous dynamics of discrete function fθ

dz(t)/dt=f(z(t),t;θ). Following the neural ODE perspective, the changes in log-density can be computed using an integral of continuous time dynamics:

The current formulation models the inter-arrival distribution of each time-step independent of past history. The timing of future events might depend on the previous events in a very complex way, so it is important to make use of the history information to model future events. To capture this dependency, we adapt our flow model by learning a time-dependent base distribution pθ(zn) conditioned on the history. In the next section, we show how we employ our flow module in a probabilistic framework that encodes history in the generation process of base distributions of flow.

2.3 Base Distribution with Probabilistic Parameters

To avoid confusion, at time-step n, we use the notation zτn for the random variable of the normalizing flow base distribution and zvaen to refer to the VAE latent space. We start by explaining the generation phase, i.e., how distributions over inter-arrival time τn are generated by stacking the normalizing flow module on top of the VAE backbone and then describing the training process.

Generation. Figure 1 illustrates an overview of the generation process. Here, we adapt a recurrent VAE framework consisting of a time-variant prior network parametrized by ψ which takes the history of past actions τ1:n−1 and provides the latent distribution pψ(zvaen|τ1:n−1). Then, a sample of this distribution is passed to the VAE’s decoder which produces a non-parametric distribution over the inter-arrival time τn by first generating the normalizing flow base distribution pθ(zτn|zvaen) and then transforming it through flow transformation gθ. By applying the change of variable formula discussed in Equation 5, we can write the distribution over inter-arrival time τn as:

Training. At time-step n of training, the VAE module takes the sequence of inter-arrival times τ1:n to approximate the true distribution over the latent space zvaen via the help of the recurrent inference network qϕ(zvaen|τ1:n) which is parametrized with ϕ. A time-dependent prior network is also adapted to help the model to take use of history information in generation phase pψ(zvaen|τ1:n−1)

. Both prior and posterior distributions are assumed to follow conditional multivariate Gaussian distributions with diagonal covariance:

At each time-step during training, a latent code zvaen is taken from the posterior and is passed to the decoder which aims to generate a distribution over inter-arrival time τn by first generating the base distribution of flow pθ(zτn|zvaen) and then transforming it through flow transformations. The VAE backbone is jointly trained with the flow module by optimizing the variational lower bound using the re-parameterization trick (Kingma & Welling, 2014):

where the log-likelihood term logpθ(τn|zvaen) is computed by Equation 6 using the predicted base distribution pθ(zτn|zvaen).

Implementation. We implement the inference network qϕ and the prior network pψ

To show the effectiveness of our non-parametric approach, we evaluated the performance of our model on both synthetic and real-world datasets and compared it with state-of-the-art models.

Real-world Datasets.We also evaluated our models on real datasets that cover the areas of healthcare, social media, and human activity: (I) LinkedIn The LinkedIn data is collected from over 3000 LinkedIn accounts and record the times when the users changed their jobs. (II) MIMIC MIMIC-III (Medical Information Mart for Intensive Care III)  (Johnson et al., 2016; Pollard, 2016) is a publicly available, large dataset containing the admission times to hospital of more than 40000 anonymous patients. (III) Breakfast The Breakfast (Kuehne et al., 2014) dataset contains 1712 videos with 48 classes of actions in breakfast preparation. For our model to learn a more meaningful latent space in this dataset, we extend our approach to model marked point process which predicts both the inter-arrival times of events and the category of next event. Accordingly, the log-likelihood of action prediction is added to training objective and evaluation criterion. For the Breakfast dataset, we use the standard train and test split proposed by Kuehne et al. (2014). All other datasets are splitted into train, validation, and test sets by 0.7, 0.1, 0.2 ratios.

Baseline. We compare our model with the recently proposed APP-VAE (Mehrasa et al., 2019), which is a latent variable framework for modeling marked temporal point processes. APP-VAE models the time distribution by learning the conditional intensity in a probabilistic framework. They model action-category data with multi-nomial distribution. We used their original setup to compare APP-VAE with our model on breakfast dataset, but for the rest of the datasets, we modified their model to predict the time distribution only.

Quantitative Comparison. We report the IWAE bound which is a lower bound of the real log-likelihood. To compute IWAE at time step i, we draw 1500 samples from posterior distribution pψ(zvaei|τ1:i−1). We also report the mean absolute error (MAE) to evaluate the performance of our model in predicting future events. The MAE between the samples of the predicted time distribution and the ground-truth is reported. To compute MAE at time-step i, we draw 100 samples from prior distribution pψ(zvaei|τ1:i−1) and 15 samples from each predicted base distribution pθ(τi|zvaei). The corresponding samples of predicted inter-arrival time distribution are obtained using Equation 2. For Breakfast dataset, in addition to MAE we also report the accuracy of predicting the category’s next action. Similarly, we use 100 samples and for each predicted distribution, we select the action category with maximum probability as the predicted class. For each time-step, the most frequently predicted type is reported as the model’s prediction. For all IWAE, MAE, and accuracy the average along all the time-steps of all sequences is reported. The results are shown in Tab. 1 and Tab. 2

. Our model (PPF) outperforms the APP-VAE model across all the datasets on IWAE. The results indicate the better capability of PPF at modeling point process sequence data, especially the real-world data with complicated underlying distributions. The better log-likelihood estimations on real world data is conformed by lower MAE which reflects the better quality of generated samples from PPF.

In this paper, we proposed PPF, an intensity-free framework that directly models the point process as a non-parametric distribution by utilizing normalizing flows. The proposed model is capable of capturing complex time distributions as well as performing stochastic future prediction.