In this paper, we propose a novel mixture of expert architecture for learning polyhedral classifiers. We learn the parameters of the classifierusing an expectation maximization algorithm. Wederive the generalization bounds of the proposedapproach. Through an extensive simulation study, we show that the proposed method performs comparably to other state-of-the-art approaches. 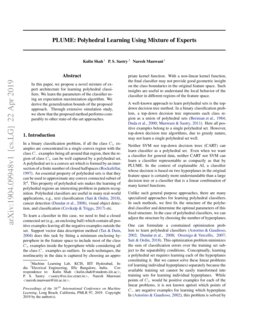 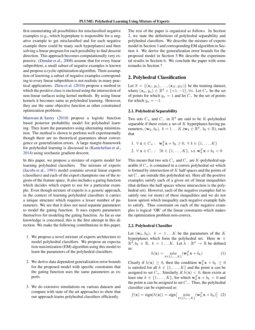 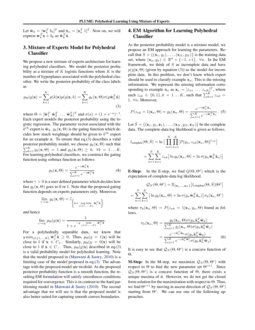 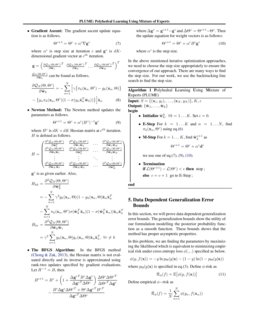 In a binary classification problem, if all the class C+ examples are concentrated in a single convex region with the class C− examples being all around that region, then the region of class C+ can be well captured by a polyhedral set. A polyhedral set is a convex set which is formed by an intersection of a finite number of closed halfspaces (Rockafellar, 1997). An essential property of polyhedral sets is that they can be used to approximate any convex connected subset of Rd

. This property of polyhedral sets makes the learning of polyhedral regions an interesting problem in pattern recognition. Polyhedral classifiers are useful in many real-world applications, e.g., text classification

To learn a classifier in this case, we need to find a closed connected set (e.g., an enclosing ball) which contain all positive examples leaving all the negative examples outside the set. Support vector data description method

(Tax & Duin, 2004) does this task by fitting a minimum enclosing hypersphere in the feature space to include most of the class C+ examples inside the hypersphere while considering all the class C−

examples as outliers. In such techniques, the nonlinearity in the data is captured by choosing an appropriate kernel function. With a non-linear kernel function, the final classifier may not provide good geometric insight on the class boundaries in the original feature space. Such insights are useful to understand the local behavior of the classifier in different regions of the feature space.

Neither SVM nor top-down decision trees (CART) can learn classifier as a polyhedral set. Even when we want a classifier for general data, neither CART nor SVM can learn a classifier representable as compactly as that by PLUME. In the context of explainable AI, a classifier whose decision is based on two hyperplanes in the original feature space is certainly more understandable than a large decision tree or a classifier that is a linear combination of many kernel functions.

One can formulate a constrained optimization problem to learn polyhedral classifiers (Astorino & Gaudioso, 2002; Dundar et al., 2008; Orsenigo & Vercellis, 2007; Sati & Ordin, 2018). This optimization problem minimizes the sum of classification errors over the training set subject to the separability conditions. Conceptually, learning a polyhedral set requires learning each of the hyperplanes constituting it. But we cannot solve these linear problems (of learning individual hyperplanes) separately because the available training set cannot be easily transformed into training sets for learning individual hyperplanes. While points of C+ would be positive examples for each of the linear problems, it is not known apriori which points of C− are negative examples for learning which hyperplane. In (Astorino & Gaudioso, 2002)

(Dundar et al., 2008) assume that for every linear subproblem, a small subset of negative examples is known and propose a cyclic optimization algorithm. Their assumption of knowing a subset of negative examples corresponding to every linear subproblem is not realistic in many practical applications. Zhou et al. (2016) propose a method in which the positive class is enclosed using the intersection of non-linear surfaces using kernel methods. By using linear kernels it becomes same as polyhedral learning. However, they use the same objective function as other constrained optimization problems.

propose a logistic function based posterior probability model for polyhedral learning. They learn the parameters using alternating minimization. The method is shown to perform well experimentally though there are no theoretical guarantees about convergence or generalization errors. A large margin framework for polyhedral learning is discussed in

In this paper, we propose a mixture of experts model for learning polyhedral classifiers. The mixture of experts (Jacobs et al., 1991) model contains several linear experts (classifiers) and each of the expert champions one of the regions of the feature space. It also includes a gating function which decides which expert to use for a particular example. Even though mixture of experts is a generic approach, in the context of learning polyhedral classifiers it carries a unique structure which requires a lesser number of parameters. We see that it does not need separate parameters to model the gating function. It uses experts parameters themselves for modeling the gating function. As far as our knowledge is concerned, this is the first attempt in this direction. We make the following contributions in this paper.

Two sets C+ and C− in Rd are said to be K-polyhedral separable if there exists a set of K hyperplanes having parameters, (wk,bk),k=1…K (wk∈Rd,bk∈R), such that

Let (wk,bk),k=1…K be the parameters of the K hyperplanes which form the polyhedral set. Here w∈Rd,bk∈R,k=1…K. Let h:Rd→R be defined as:

. Each expert models the posterior probability using the logistic regression. The parameter vector associated with the

kth expert is ~wk. gk(x,Θ) is the gating function which decides how much weightage should be given to kth expert for an example x. To ensure that eq.(3) describes a valid posterior probability model, we choose gk(x,Θ) such that ∑Kk=1gk(x,Θ)=1 and gk(x,Θ)≥0,∀k=1…K. For learning polyhedral classifiers, we construct the gating function using softmax function as follows:

where γ>0 is a user defined parameter which decides how fast gk(x,Θ) goes to 0 or 1. Note that the proposed gating function depends on experts parameters only. Moreover,

For a polyhedrally separable data, we know that yminj∈{1,…,K}~wTj~x≥0. Thus, pΘ(y=1|x) will be close to 1 if x∈C+. Similarly, pΘ(y=0|x) will be close to 1 if x∈C−. Thus, pΘ(y|x) described in eq.(3) is a valid probability model for polyhedral learning. Note that the model proposed in (Manwani & Sastry, 2010) is a limiting case of the model proposed in eq.(3). The advantage with the proposed model are twofold. As the proposed posterior probability function is a smooth function, the resulting EM formulation will satisfy smoothness conditions required for convergence. This is in contrast to the hard partitioning model in Manwani & Sastry (2010). The second advantage that we will see is that the proposed model is also better suited for capturing smooth convex boundaries.

As the posterior probability model is a mixture model, we propose an EM approach for learning the parameters. Recall that S={(x1,y1),…,(xN,yN)} is the training data set, where (xn,yn)∈Rd×{−1,+1},∀n. In the EM framework, we think of S as incomplete data and have p(y|x,Θ) (given by equation (3)) as the model for incomplete data. In this problem, we don’t know which expert should be used to classify example xn. This is the missing information. We represent the missing information corresponding to example xn as zn=[zn1 … znK]T, where each znk∈{0,1},k=1…K, such that ∑Kk=1znk=1,∀n. Moreover,

E-Step: In the E-step, we find Q(Θ,Θc) which is the expectation of complete-data log likelihood.

It is easy to see that QN(Θ,Θc) is a concave function of Θ.

M-Step: In the M-step, we maximize QN(Θ,Θc) with respect to Θ to find the new parameter set Θc+1. Since QN(Θ,Θc) is a concave function of Θ, there exists a unique maxima of it. However, we do not get the closed form solution for the maximization with respect to Θ. Thus, we find Θc+1 by moving in ascent direction of QN(Θ,Θc) starting from Θc. We can use one of the following approaches.

In this section, we will prove data dependent generalization error bounds. The generalization bounds show the utility of our formulation modelling the posterior probability function as a smooth function. These bounds shows that the method has proper asymptotic properties.

In this problem, we are finding the parameters by maximizing the likelihood which is equivalent to minimizing empirical risk under cross entropy loss ϕ(.,.) specified as below.

N i.e., RN(F)=ES[^RN(F)]. We formalize our assumption as below to prove data dependent error bound.

We start our discussion regarding data dependent error bounds with the following result from (Bartlett & Mendelson, 2003).

For every δ∈(0,1) and positive integer N, every f∈F satisfies

with probability at least 1−δ.

Proof: To simplify the notation, we write supw1,...,wk as supw.

Now, in order to bound ^RN(F), using Lemma 3, we will bound each of ^RN(Fk) individually.

Proof: we decompose ^RN(Fk) as follows.

where ϵnk is an independent Rademacher sequence. Using the Cauchy-Schwartz and Jensen inequalities,

The Lipschitz constant of sigmoid function is 1. Using Theorem 12 of

(Bartlett & Mendelson, 2003), we can write above equation as

As yn∈{+1,−1}, we can redefine ϵn=ϵnyn,∀n. Using new definition of ϵn, we can rewrite above equation as

Using the Cauchy-Schwartz and Jensen inequalities,

Suppose assumption 1 holds. Then, for any function f, there holds

Proof: Using results of Lemma 3 and Lemma 4, we can bound ^RN(F) as follows.