A coin with three states is not necessarily an anomaly. A coin falls on either of its two sides head or tail. However, there is a remote possibility that it may not fall but roll on its edge and get stuck somewhere without falling on either of its sides. This possibility is remote for a classical coin so much so that it is never analyzed. For a three state quantum coin(qutrit), this is a fact. It has three states, period. Playing a Parrondo's game with a qutrit is the subject of this paper. We show that a true quantum Parrondo's game can be played with a 3 state coin in a 1D quantum walk in contrast to the fact that playing a true Parrondo's game with a 2 state coin(qubit) in 1D quantum walk fails in the asymptotic limits. 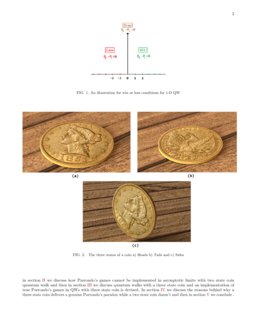 Quantum walks(QW), motivated from classical random walks, have proven to be of great utility in simulating many physical systems [1, 2] as well as in developing better quantum algorithms [3, 4, 5], such as the universal computational primitive[6]

The relevance of game theory spreads throughout many scientific fields. Quantum effects introduced to the classical game theory led to the development of quantum game theory, where the probabilities are taken in to account with quantum effects like superposition and interference[13]. Parrondo’s games[14], in its simplest form, is a gambling game consisting two games A and B. whose outcome is determined by the toss of a biased coin. When a player plays each of them individually it results in losing whereas if played alternatively can result in a winning outcome. This apparent paradox when each of these games is losing when played individually but when played alternately or in some other deterministic or random sequence (such as ABB…,ABAB…, etc.) can become a winning game is known as Parrondo’s paradox. Originally J. M. R. Parrondo devised this paradox to provide a mechanism for Brownian ratchets where a directed motion can be harnessed from Brownian motion. In Ref.[15]

The games A and B can be played in any sequence, i.e., U(αA,βA,γA)(representing game A) is operated on time steps t=nq and U(αB,βB,γB)(representing game B) is operated on time steps t≠nq, where q is the period and n is an integer. The above scheme produces a game sequence- ABAB… for q=2. Similarly, game sequences such as ABBABB… for q=2, etc., can also be generated. The evolution operator combining shift and coin operators can be written as:

and after N steps the final state is- |ΨN⟩=UN|Ψ0⟩. As illustrated in Fig. 1, after N steps, if the probability of finding the walker to the right of the origin PR, is greater than the probability PL to be found to the left of the origin, i.e., PR−PL>0, then the player wins. Similarly, if PR−PL<0, the player losses. If PR−PL=0, it’s a draw. Parrondo’s games using 1D discrete time QW are formulated by making use of above scheme. Two different coin operators UA(αA,βA,γA) and UB(αB,βB,γB) are used to construct the two losing games AAA.. and BBB.., for αA=−45,βA=45,γA=0, AND αB=0,βB=88,γB=−15, i.e., for UA=U(−45,45,0), UB=U(0,88,−15) we obtain the Fig.2. Individually each of the games is losing (See Fig. 2(a),(b))and for the sequence- ABBBABBB… the result is winning at the beginning but in the asymptotic limit the player loses again as in Fig. 2(c), one can check for different sequences, like- ABAB…,ABBABB…, etc., and in all cases in the asymptotic limits one loses. Hence Parrondo’s paradox does not exist in case of 1-D discrete time QW with a single qubit as also established in Refs. [17, 18].

To see a Parrondo’s paradox in 1D discrete quantum walks is thus the main motivation of this work and we show in the next section a recipe to do just that using a single three-state coin (qutrit).

In this section, we define a one-dimensional discrete time QW with a three-state coin. The position of the walker is defined by a vector in the Hilbert space

HP spanned by an orthogonal normal basis {|n⟩:n∈Z}. At each position, the walker is in a superposition of three coin basis states. This coin state is a vector in Hilbert space HC with basis states represented by the following orthogonal vectors:

where, |χ⟩c=1√3(|0⟩+|1⟩−i|2⟩) is the initial coin state. A 1D QW with qutrit is defined with the position of the walker shifted by the shift operator S′ after the coin operator C is operated on the qutrit state as:

The shift operator is defined in such a way that only when the coin is in the state |0⟩ or |2⟩ the walker moves else when walker is in state |1⟩ the walker stays in the same position. The coin operator C is defined as follows:

where α, β, γ and θ are four real parameters defining the elements: I,J,K,R,G and B with

This kind of unitary operators are used in particle physics in the density matrix formalism for elementary particles[20]. Similar to that of single two state coin or qubit QW scheme discussed in preceding section, we define an evolution operator as follows:

The evolution of the walker after N steps is |ψN⟩=U′N|ψ0⟩. Similar to that of the two state coin quantum walks, winning and losing is defined as follows: if the probability of finding the walker to the right of the origin PR, is greater than the probability PL to be found to the left of the origin , i.e., PR−PL>0, then the player wins. Similarly, if PR−PL<0, the player losses. If PR−PL=0, it’s a draw. The two coin operators corresponding to the two games A and B are defined as follows:

Here A is operated on time steps t=nq and B is played on time steps t≠nq, where q is the period and n is an integer same as discussed in preceding section. For the choice of αA=π,βA=π/2,γA=π,θA=π,αB=π/2,βB=π/2,γB=3π/2,θ=π/2 as shown in Eq. 11 we obtain Fig. 3. When game AAAA… and BBBB… are played it results in losing (see Figs. 3(a),(b)), whereas when they were played in the sequence ABAB… we obtain a winning outcome (see Fig. 3(c)). Thus unlike a two state coin(qubit), in case of a three state coin(qutrit) in asymptotic limits we obtain a true Parrondo’s paradox.

which is different from the initial state (Eq. 5) considered in the preceding section. Now with this new initial state but with the same shift S′ (Eq. 7), we now obtain Fig. 4. It is clear that the new initial state does not give us a paradox, when the games are played in sequence ABAB…(see Fig. 4(c)). Now considering again another initial state given as:

Next we consider the influence of the shift operator, using a different shift operator for the same initial state as in Eq. (5). Here we define a new shift S′1-

The shift operator as defined in Eq. 14 also gives us a Parrondo’s paradox after around 200 steps(almost asymptotic limit) as in Fig. 6. One can see that the change in shift operator has changed the behavior of the Parrondo’s games, here the yield of the player is changing. Now if we consider another shift operator S′2

where the state |2⟩ is the wait state, we obtain the plot of median, PR−PL as in Fig. 7. Here the game sequence AAAA… gives us a draw and the sequence BBBB… provides a winning outcome whereas the ABAB… sequence gives us a losing outcome, which is also a paradox with a role reversal with the definitions of win and loss from Fig. 1 is reversed. Thus we can conclude that the change of shift operator does not affect the paradox but only the yield of the player. So what does the qutrit QW have which the qubit QW doesn’t have? To understand this we focus on the difference between the shift operators used for qubit versus that used for qutrit case. In case of a qutrit, there are 3 states, and the shift operators: S′,S′1,S′2 is of the form as given in Eqs. (7,14,15), have a wait state, a left going and another right going state. In qubit quantum walk, the shift operator is defined as in Eq. 2, S is bereft of any wait state. Thus, the most plausible reason behind observing the paradox in qutrits but not in qubits is the possibility of a wait state. Of course the initial state of qutrit with three coin states as opposed to only two possible coin states for a qubit has an important bearing in observing Parrondo’s paradox as shown in Figs. 3,4.

To understand the physical mechanism, one can allude to Ref.[21] which shows a quantum walk modeled with cold atoms. In case of cold atoms the shift operators and coin operators are modeled using optical lattice and lasers, such a model can be used to physically realize the shift operators in Eqs.(7,14,15). In Ref.[17] too, it has been shown that Parrondo’s paradox does not exist for a single qubit coin quantum walk considered. Qutrits can be physically realized with biphotons, demonstrated in Ref.[22], using two correlated photons- a ”Biphotonic qutrit”. Such a biphotonic qutrit and optical lattice can be used to physically realize a three state quantum walk. Quantum walks with qutrits can be used for quantum algorithms and its non-trivial nature with Parrondo’s games can be helpful for better insights into quantum ratchets and quantum algorithms.

Earlier attempts using a single two-state coin failed in asymptotic limit [17, 18]. Here with the aid of a qutrit we successfully implemented a true Parrondo’s paradox (see Figs.  3,5,8). Quantum Parrondo’s games play an important role in quantum ratchets, providing a mechanism for a particle to transport against an applied bias, quantum analogue for Brownian ratchets. Different kinds of quantum walks and its applications can help the community in better understanding and for developing new quantum algorithms.