In this paper, we address efficiently and robustly collecting objects stored in different trays using a mobile manipulator. A resolution complete method, based on precomputed reachability database, is proposed to explore collision-free inverse kinematics (IK) solutions and then a resolution complete set of feasible base positions can be determined. This method approximates a set of representative IK solutions that are especially helpful when solving IK and checking collision are treated separately. For real world applications, we take into account the base positioning uncertainty and plan a sequence of base positions that reduce the number of necessary base movements for collecting the target objects, the base sequence is robust in that the mobile manipulator is able to complete the part-supply task even there is certain deviation from the planned base positions. Our experiments demonstrate both the efficiency compared to regular base sequence and the feasibility in real world applications. 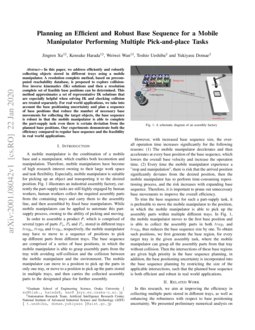 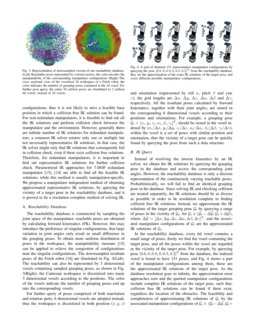 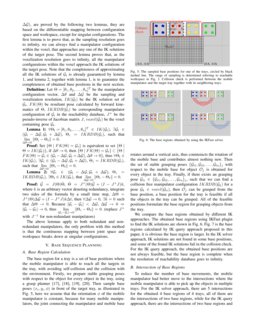 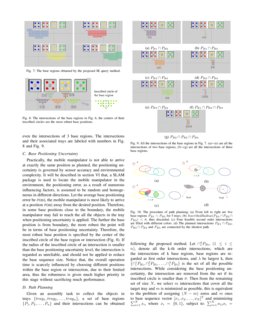 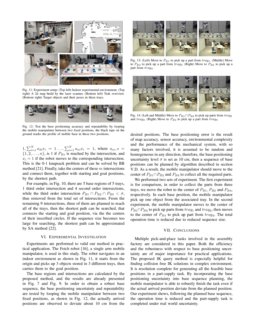 In this paper, we present a planner that plans a sequence of base positi...
Jingren Xu, et al. ∙

This paper presents planning algorithms for a robotic manipulator with a...
Changjoo Nam, et al. ∙

In this research, we aim at improving the efficiency in collecting multiple parts stored in different trays, as well as enhancing the robustness with respect to base positioning uncertainty. We presented preliminary numerical analysis on reducing the unnecessary base movements in [harada2015], while in this research, the work is conducted in a complete and feasible fashion. The completeness is achieved in by obtaining all the feasible base positions, using a resolution complete method to determine the existence of collision-free IK solutions. And the feasibility is achieved by taking into account the base positioning uncertainty of the mobile manipulator in the real environment. Moreover, the effectiveness of our proposed method is experimentally confirmed.

Vafadar et al.[vafadar2018] also researched the optimum base movements of the mobile manipulator, while they consider neither robustness nor completeness which are the main topics of this paper. There are some research on the optimum base placement of the mobile manipulator, Du et al. [du2013] used the manipulability index to determine a suitable placement. OpenRAVE [openrave] provides an inverse reachability module, which clusters the reachability space for a base-placement sampling distribution that can be used to find out where the robot should stand in order to perform a manipulation task. Vahrenkamp [vahrenkamp2009, vahrenkamp2012, vahrenkamp2013]

[pin1990, seraji1993, yamamoto1999, tchon2000, bayle2001], they were mainly concerned with the resolution of the kinematic redundancy caused by the mobile base, coordinated control of mobile base and the manipulator and manipulability analysis of the mobile manipulator.

While there has been hardly any research planning the base sequence for part-supply tasks considering completeness and base positioning uncertainty. Our main contributions are:

Fig. 2 shows the overview of the task. In order to assemble a specific product P, which consists of three assembly parts Pa, Pb and Pc stored in three different trays tray1, tray2 and tray4, we focus on planning the base sequence for collecting all the required assembly parts from the containing trays, and the following information is assumed to be known: (1) The types of parts to be collected and their associated trays. (2) The geometrical parameters of the assembly parts, trays and the potential obstacles in the environment. (3) The poses of the parts, trays and obstacles.

We query the precomputed reachability database, for every sampled base position, if there exist collision free IK solutions that reach all the parts in one tray. The resolution complete set of base positions, where the mobile manipulator is able to grasp the parts from a tray without self-collision and the collision with environment, formulate the base region for the tray. Let PBi denote the base regions of trays trayi, PBi∩PBj denote the intersection of PBi and PBj, the base movements can be reduced by moving the manipulator to the intersection of different base regions, for example, the mobile manipulator moves to PB1∩PB2, and is able to pick up Pa and Pb, then it moves to PB4 to pick up Pc.

The reachability database is constructed by sampling the joint space of the manipulator, reachable poses are obtained by calculating forward kinematics (FK). However, this may introduce the preference of singular configurations, that large variation in joint angles only result in small difference in the grasping poses. To obtain more uniform distribution of poses in the workspace, the manipulability measure

[yoshikawa1985] can be applied to relieve the congestion of configurations near the singular configurations. The downsampled resultant poses of the Fetch robot [fetch] are illustrated in Fig. 3(Left). The reachability can also be represented by 3 dimensional voxels containing sampled grasping poses, as shown in Fig. 3(Right), the Cartesian workspace is discretized into many 3 dimensional voxels according to the positions. The color of the voxels indicate the number of grasping poses end up into the corresponding voxels.

For further query of poses comprised of both translation and rotation parts, 6 dimensional voxels are adopted instead, thus the workspace is discretized in both position (x,y,z) and orientation (represented by roll α, pitch β and yaw γ), the grid lengths are Δx, Δy, Δz, Δα, Δβ and Δγ, respectively. All the resultant poses calculated by forward kinematics, together with their joint angles, are stored in the corresponding 6 dimensional voxels according to their positions and orientations. For example, a grasping pose Gi=[xi,yi,zi,αi,βi,γi]T, should be stored in the voxel indexed by (xi/Δx, yi/Δy, zi/Δz, αi/Δα, βi/Δβ, γi/Δγ), within the voxel is a set of poses with similar position and orientation, thus the vicinity of a target pose can be quickly found by querying the pose from such a data structure.

Instead of resolving the inverse kinemtics by an IK solver, we obtain the IK solutions by querying the grasping pose in the database and access the corresponding joint angles. However, the reachability database is only a discrete representation of the continuously varying reachable poses. Probabilistically, we will fail to find an identical grasping pose in the database. Since solving IK and checking collision are treated separately, the IK solutions should be as diverse as possible in order to be resolution complete in finding collision free IK solutions. Instead, we approximate the IK solutions of the target grasping pose Gt by querying a range of poses in the vicinity of Gt, for Gi∈(Gt−ΔG,Gt+ΔG), where ΔG=[Δx,Δy,Δz,Δα,Δβ,Δγ]T, and the associated manipulator configurations of Gi are the approximated IK solutions of Gt.

In the reachability database, every 6d voxel contains a small range of poses, firstly we find the voxel containing the target pose, and all the poses within the voxel are regarded as the vicinity of the target pose. For example, by querying pose [0.6,0,0.8,0,0.5,0.5]T from the database, the indexed voxel is found to have 151 poses, and Fig. 4 shows a part of the manipulator configurations among them, these are the approximated IK solutions of the target pose. As the database resolution goes to infinity, the approximation error approaches zero and the queried manipulator configurations include complete IK solutions of the target pose, such that, collision free IK solutions can be found if there exist, regardless the location of the obstacles.

be the manipulator configuration vector,

Δθ and ΔG be the sampling and voxelization resolution, IK(Gt) be the IK solution set of Gt, FK(Θ) be resultant pose calculated by forward kinematics of Θ, IKRDB(Gi) be corresponding manipulator configuration of Gi in the reachability database, J+ be the pseudo-inverse of Jacobian matrix J, voxel(Gt) be the voxel containing pose Gt.

The above lemmas apply to both redundant and non-redundant manipulators, the only problem with this method is that the continuous mapping between joint space and workspace breaks down at singular configurations.

The base region for a tray is a set of base positions where the mobile manipulator is able to reach all the targets in the tray, with avoiding self-collision and the collision with the environment. Firstly, we prepare stable grasping poses with respect to the object for every object in the tray, using a grasp planner [harada2008, uto2013, tsuji2014, harada2014]. Then sample base poses (xi,yi,ϕ) in front of the target tray, as illustrated in Fig. 5, here we assume that the orientation ϕ of the mobile manipulator is constant, because for many mobile manipulators, the joint connecting the manipulator and mobile base rotates around a vertical axis, thus counteracts the rotation of the mobile base and contributes almost nothing new. Then the set of stable grasping poses {Gt1,Gt2,…,Gtn}j with respect to the mobile base for object Oj is obtained for every object in the tray. Finally, if there exists an grasping pose Gti∈{Gt1,Gt2,…,Gtn}j, such that we can find a collision free manipulator configuration IKRDB(Gk) for a pose Gk∈voxel(Gti), then Oj can be grasped from the base position, a base position for the tray is feasible if all the objects in the tray can be grasped. All of the feasible positions formulate the base region for grasping objects from the tray.

V-B Intersection of Base Regions

Given an assembly task to collect the objects in trays {tray1,tray2,…,trayn}, a set of base regions {P1,P2,…,Pn} and their intersections can be obtained following the proposed method. Let ∩kiPBi, (1≤i≤n), denote all the k-th order intersections, which are the intersections of k base regions, base regions are regarded as first order intersections, and λ be largest k, then {∩1iPBi,∩2iPBi,…,∩λiPBi} is the set of all the possible intersections. While considering the base positioning uncertainty, the intersection are removed from the set if its inscribed circle is smaller than ¯σ. Then from the remaining set of size N, we select m intersections that cover all the target tray and m is minimized as possible, this is equivalent to the problem of assigning (N−m) zeros and m ones to base sequence vector [x1,x2,…,xN]T and minimizing ∑Ni=1xi, where xi={0,1}, subject to: ∑Ni=1a1ixi=1,∑Ni=1a2ixi=1…,∑Ni=1anixi=1, where asi,s={1,2,…,n}, is 1 if PBs is reached by the intersection, and xi=1 if the robot moves to the corresponding intersection. This is the 0-1 knapsack problem and can be solved by BB method [kolesar1967]. Finally, take the centers of these m intersections and connect them, together with starting and goal positions, by the shortest path.

Experiments are performed to valid our method in practical application. The Fetch robot [fetch], a single arm mobile manipulator, is used in this study. The robot navigates in an indoor environment as shown in Fig. 11, it starts from the origin and picks up 3 objects stored in 3 different trays, then carries them to the goal position.

The base regions and intersections are calculated by the proposed method, and the results are already presented in Fig. 7 and Fig. 9. In order to obtain a robust base sequence, the base positioning uncertainty and repeatability are tested by looping the mobile manipulator between two fixed positions, as shown in Fig. 12, the actually arrived positions are observed to deviate about 10 cm from the desired positions. The base positioning error is the result of map accuracy, sensor accuracy, environmental complexity and the performance of the mechanical system, with so many factors involved, it is assumed to be random and homogeneous in any direction, therefore, the base positioning uncertainty level ¯σ is set as 10 cm, then a sequence of base positions can be planned by algorithm described in section V.D. As a result, the mobile manipulator should move to the center of PB1∩PB2 and PB4 to collect all the required parts.

Multiple pick-and-place tasks involved in the assembly factory are considered in this paper. Both the efficiency and the robustness with respect to base positioning uncertainty are of major importance for practical applications. The proposed IK query method is especially helpful for finding collision free IK solutions in complex environment. It is resolution complete for generating all the feasible base positions in a part-supply task. By incorporating the base positioning uncertainty into base sequence planning, the mobile manipulator is able to robustly finish the task even if the actual arrived position deviate from the planned position. Our experiment shows, following the planned base sequence, the operation time is reduced and the part-supply task is completed under real world uncertainty.