We show that for any k ≥ 0, there exists a planar graph which is B_k+1-CPG but not B_k-CPG. As a consequence, we obtain that B_k-CPG is a strict subclass of B_k+1-CPG. 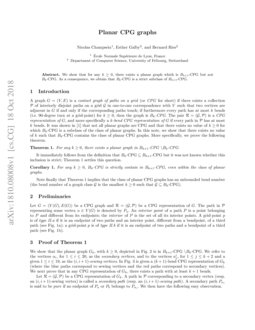 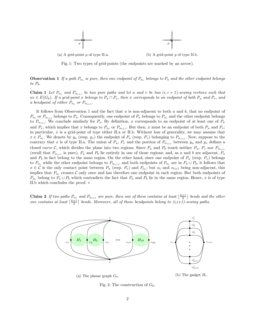 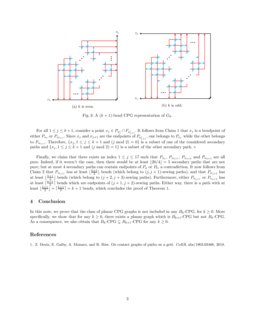 A graph G=(V,E) is a contact graph of paths on a grid (or CPG for short) if there exists a collection P of interiorly disjoint paths on a grid G in one-to-one correspondence with V such that two vertices are adjacent in G if and only if the corresponding paths touch; if furthermore every path has at most k bends (i.e. 90-degree turn at a grid-point) for k≥0, then the graph is Bk-CPG. The pair R=(G,P) is a CPG representation of G, and more specifically a k-bend CPG representation of G if every path in P has at most k bends. It was shown in [cpg] that not all planar graphs are CPG and that there exists no value of k≥0 for which Bk-CPG is a subclass of the class of planar graphs. In this note, we show that there exists no value of k such that Bk-CPG contains the class of planar CPG graphs. More specifically, we prove the following theorem.

For any k≥0, there exists a planar graph in Bk+1-CPG ∖Bk-CPG.

It immediately follows from the definition that Bk-CPG ⊆ Bk+1-CPG but it was not known whether this inclusion is strict; Theorem 1.1 settles this question.

For any k≥0, Bk-CPG is strictly contain in Bk+1-CPG, even within the class of planar graphs.

Note finally that Theorem 1.1 implies that the class of planar CPG graphs has an unbounded bend number (the bend number of a graph class G is the smallest k≥0 such that G⊆Bk-CPG).

We show that the planar graph Gk, with k≥0, depicted in Fig. 2 is in Bk+1-CPG ∖Bk-CPG. We refer to the vertices αi, for 1≤i≤20, as the secondary vertices, and to the vertices uij, for 1≤j≤k+2 and a given 1≤i≤19, as the (i,i+1)-sewing vertices. In Fig. 3 is given a (k+1)-bend CPG representation of Gk (where the blue paths correspond to sewing vertices and the red paths correspond to secondary vertices). We next prove that in any CPG representation of Gk, there exists a path with at least k+1 bends.

Let Pαi and Pαi+1 be two pure paths and let u and v be two (i,i+1)-sewing vertices such that uv∈E(Gk). If a grid-point x belongs to Pu∩Pv, then x corresponds to an endpoint of both Pu and Pv, and a bendpoint of either Pαi or Pαi+1.

It follows from Observation 1 and the fact that u is non-adjacent to both a and b, that no endpoint of Pαi or Pαi+1 belongs to Pu. Consequently, one endpoint of Pu belongs to Pαi and the other endpoint belongs to Pαi+1. We conclude similarly for Pv. By definition, x corresponds to an endpoint of at least one of Pu and Pv, which implies that x belongs to ˚Pαi or ˚Pαi+1. But then, x must be an endpoint of both Pu and Pv; in particular, x is a grid-point of type either II.a or II.b. Without loss of generality, we may assume that x∈˚Pαi. We denote by yu (resp. yv) the endpoint of Pu (resp. Pv) belonging to Pαi+1. Now, suppose to the contrary that x is of type II.a. The union of Pu, Pv and the portion of Pαi+1 between yu and yv defines a closed curve C, which divides the plane into two regions. Since Pa and Pb touch neither Pu, Pv nor ˚Pαi+1 (recall that Pαi+1 is pure), Pa and Pb lie entirely in one of those regions; and, as a and b are adjacent, Pa and Pb in fact belong to the same region. On the other hand, since one endpoint of Pu (resp. Pv) belongs to Pαi while the other endpoint belongs to Pαi+1, and both endpoints of Pαi are in Pa∪Pb, it follows that x∈C is the only contact point between Pu (resp. Pv) and Pαi; but αi and αi+1 being non-adjacent, this implies that Pαi crosses C only once and has therefore one endpoint in each region. But both endpoints of Pαi belong to Pa∪Pb which contradicts the fact that Pa and Pb lie in the same region. Hence, x is of type II.b which concludes the proof. ⋄

In this note, we prove that the class of planar CPG graphs is not included in any Bk-CPG, for k≥0. More specifically, we show that for any k≥0, there exists a planar graph which is Bk+1-CPG but not Bk-CPG. As a consequence, we also obtain that Bk-CPG ⊊ Bk+1-CPG for any k≥0.