Physical design and production of Integrated Circuits (IC) is becoming increasingly more challenging as the sophistication in IC technology is steadily increasing. Placement has been one of the most critical steps in IC physical design. Through decades of research, partition-based, analytical-based and annealing-based placers have been enriching the placement solution toolbox. However, open challenges including long run time and lack of ability to generalize continue to restrict wider applications of existing placement tools. We devise a learning-based placement tool based on cyclic application of Reinforcement Learning (RL) and Simulated Annealing (SA) by leveraging the advancement of RL. Results show that the RL module is able to provide a better initialization for SA and thus leads to a better final placement design. Compared to other recent learning-based placers, our method is majorly different with its combination of RL and SA. It leverages the RL model's ability to quickly get a good rough solution after training and the heuristic's ability to realize greedy improvements in the solution. 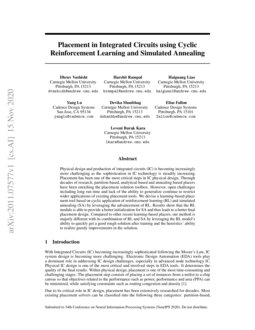 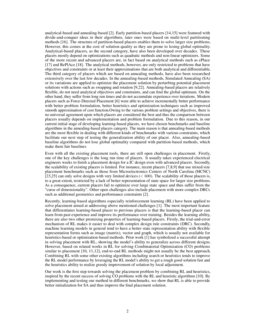 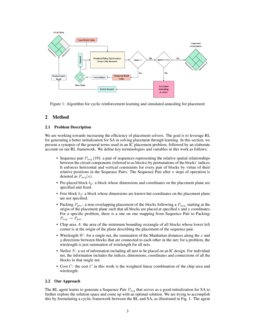 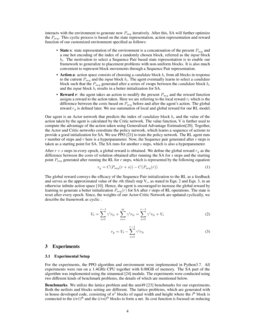 Detailed routing is one of the most critical steps in analog circuit des...
Haiguang Liao, et al. ∙

ePlace-3D: Electrostatics based Placement for 3D-ICs

With Integrated Circuits (IC) becoming increasingly sophisticated following the Moore’s Law, IC system design is becoming more challenging. Electronic Design Automation (EDA) tools play a dominant role in addressing IC design challenges, especially in advanced node technology IC. Physical IC design is one of the most critical and involved steps in EDA tools. It determines the quality of the final results. Within physical design, placement is one of the most time-consuming and challenging stages. The placement step consists of placing a set of instances from a netlist to a chip canvas so that objectives related to the performance such as power, performance and area (PPA) can be minimized, while satisfying constraints such as routing congestion and density [1].

Due to its critical role in IC design, placement has been extensively researched for decades. Most existing placement solvers can be classified into the following three categories: partition-based, analytical-based and annealing-based [2]. Early partition-based placers [14,15] were featured with divide-and-conquer ideas in their algorithms, later ones were based on multi-level partitioning methods [16]. The structure of partition-based placers enables them to solve larger size problems. However, this comes at the cost of solution quality as they are prone to losing global optimality. Analytical-based placers, as the second category, have also been developed over decades. These placers mostly depend on optimizations such as quadratic methods and non-linear optimizers. Some of the more recent and advanced placers are, in fact based on analytical methods such as ePlace [17] and RePlAce [18]. The analytical methods, however, are only restricted to problems that have objectives and constraints or at least their approximations that are both analytical and differentiable. The third category of placers which are based on annealing methods, have also been researched extensively over the last few decades. In the annealing-based methods, Simulated Annealing (SA) or its variations are applied to optimize the placement solution by perturbing potential placement solutions with actions such as swapping and rotation [9,22]. Annealing-based placers are relatively flexible, do not need analytical objectives and constraints, and can find the global optimum. On the other hand, they suffer from long run times and do not accumulate experience over iterations. Modern placers such as Force-Directed Placement [6] were able to achieve incrementally better performance with better problem formulation, better heuristics and optimization techniques such as improved smooth approximation of cost function.Owing to the various problem settings and objectives, there is no universal agreement upon which placers are considered the best and thus the comparison between placers usually depends on implementation and problem formulation. Due to this reason, in our current initial stage of developing learning-based placers, we have chosen benchmarks and baseline algorithms in the annealing-based placers category. The main reason is that annealing-based methods are the most flexible in dealing with different kinds of benchmarks with various constraints, which facilitate our next step of testing the generalization ability of our placer. Also, annealing-based baseline algorithms do not lose global optimality compared with partition-based methods, which make them fair baselines

Even with all the existing placement tools, there are still open challenges in placement. Firstly, one of the key challenges is the long run time of placers. It usually takes experienced electrical engineers weeks to finish a placement design for a IC design even with advanced placers. Secondly, the scalability of existing placers is limited. For instance, recent placers [7,8,9] that use mixed size placement benchmarks such as those from Microelectronics Centers of North Carolina (MCNC) [23,25] can only solve designs with very limited devices (<600

). The scalability of those placers is, to a great extent, restricted by a lack of better representation of state space for larger size problems. As a consequence, current placers fail to optimize over large state space and thus suffer from the "curse of dimensionality". Other open challenges also include placement with more complex DRCs such as additional geometrics and performance constraints [2].

Recently, learning-based algorithms especially reinforcement learning (RL) have been applied to solve placement aimed at addressing above mentioned challenges [1]. The most important feature that differentiates learning-based placer to previous placers is that the learning-based placer can learn from past experience and improve its performance over training. Besides the learning ability, there are also two other promising properties of learning-based placers. Firstly, the trial-and-error mechanism of RL makes it easier to deal with complex design rule constraints (DRC). Secondly, machine learning models in general tend to have a better state representation ability with flexible representation forms such as image (matrix), vector and graph, which is usually not available for heuristics-based or optimization-based methods. Prior work [1] has symbolized a successful attempt in solving placement with RL, showing the model’s ability to generalize across different designs. However, based on related works in RL for solving Combinatorial Optimization (CO) problems similar to placement [10, 11,12], end-to-end RL methods might not usually be the best approach. Combining RL with some other existing algorithms including search or heuristics tends to improve the RL model performance by leveraging the RL model’s ability to get a rough good solution fast and the heuristics ability to realize greedy improvement of solution by local adjustment.

Our work is the first step towards solving the placement problem by combining RL and heuristics, inspired by the recent success of solving CO problems with the RL and heuristic algorithms [10]. By implementing and testing our method in different benchmarks, we show that RL is able to provide better initialization for SA and thus improve the final placement solution.

We are working towards increasing the efficiency of placement solvers. The goal is to leverage RL for generating a better initialization for SA in solving placement through learning. In this section, we present a synopsis of the general terms used in an IC placement problem, followed by an elaborate account on our RL framework. We define key terminologies and variables in this work as follows:

The RL agent learns to generate a Sequence Pair Pseq that serves as a good initialization for SA to further explore the solution space and come up with an optimal solution. We are trying to accomplish this by formulating a cyclic framework between the RL and SA, as illustrated in Fig. 1. The agent interacts with the environment to generate new Pseq iteratively. After this, SA will further optimize the Pseq. This cyclic process is based on the state representation, action representation and reward function of our customized environment specified as follows:

and the value of the action taken by the agent is calculated by the Critic network. The value function, V is further used to compute the advantage of the action taken using Generalised Advantage Estimation[20]. Together, the Actor and Critic networks constitute the policy network, which learns a sequence of actions to provide a good initialization for SA. We use PPO [21] to train the policy network. The RL agent runs

r number of steps and r

here is a hyperparameter. Now, the Sequence pair generated after

r steps is taken as a starting point for SA. The SA runs for another s steps, which is also a hyperparameter.

The global reward conveys the efficacy of the Sequence Pair initialization to the RL as a feedback and serves as the approximated value of the rth (final) step Vr, as stated in Eqn. 2 and Eqn. 3, in an otherwise infinite action space [10]. Hence, the agent is encouraged to increase the global reward by learning to generate a better initialization Pseq(r) for SA after r steps of RL operations. The state is reset after every epoch. Since, the weights of our Actor-Critic Network are updated cyclically, we describe the framework as cyclic .

Training and Testing. Our approach consists of running the model for N epochs, and then use the Sequence Pair generated by the RL agent as a starting point for SA that is further run for a certain number of steps. In our preliminary experiments, we show that SA is able to achieve a more compact placement for the same number of steps, when initialized by our algorithm as compared to a random initialization. For the ami49 problem, the framework is trained for 10 epochs. The agent is trained for 200 steps followed by 5000 SA steps. For the lattice problem experiment, we run our framework for 15 epochs. In each epoch, the RL agent takes 200 steps and the SA takes 5000 steps. After training, the Sequence Pair generated by the RL is used as initialization for SA. For comparison, we run SA for the same number of steps for both types of initialization. Every epoch of training takes an average of 17 seconds. Once the model has been trained, the RL initialization combined with the simulated annealing part takes an average of another 17 seconds to find the final solution for 5000 steps. In contrast, pure Simulated Annealing takes an average of 16 seconds to run for 5000 steps.

Preliminary results reveal that the agent is able to outperform the baseline on both benchmarks (lattice, ami49). Table 1 summarizes the average costs of solutions from both methods on the lattice problems of different size. For all the lattice problems with different size, our proposed methods achieved lower average cost compared with the baseline pure SA with random initialization. For 100

We presented a method to solve the placement problem by combining RL and SA in a cyclic fashion. The problem is represented in the form of Sequence Pair realized in our customized environment. By cyclic application of RL and SA, our method is able to provide a good initialization for SA and thus results in lower cost placement design by a fair margin. This shows that such a cyclic framework has the potential to achieve state of the art results. We plan to achieve such results by further formulating novel RL architectures and training strategy. Our key focus is to improve the generalization ability of our method among any random layouts of the same design as well as among totally different designs like xerox[25] and IBM[26]. Different benchmarks focus on optimizing over additional parameters such as routing congestion or DRCs. We are planning to open source the code as well.

[14] Breuer, Melvin A. "A class of min-cut placement algorithms." Proceedings of the 14th Design Automation Conference. 1977.