Deconvolutional layers have been widely used in a variety of deep models for up-sampling, including encoder-decoder networks for semantic segmentation and deep generative models for unsupervised learning. One of the key limitations of deconvolutional operations is that they result in the so-called checkerboard problem. This is caused by the fact that no direct relationship exists among adjacent pixels on the output feature map. To address this problem, we propose the pixel deconvolutional layer (PixelDCL) to establish direct relationships among adjacent pixels on the up-sampled feature map. Our method is based on a fresh interpretation of the regular deconvolution operation. The resulting PixelDCL can be used to replace any deconvolutional layer in a plug-and-play manner without compromising the fully trainable capabilities of original models. The proposed PixelDCL may result in slight decrease in efficiency, but this can be overcome by an implementation trick. Experimental results on semantic segmentation demonstrate that PixelDCL can consider spatial features such as edges and shapes and yields more accurate segmentation outputs than deconvolutional layers. When used in image generation tasks, our PixelDCL can largely overcome the checkerboard problem suffered by regular deconvolution operations. 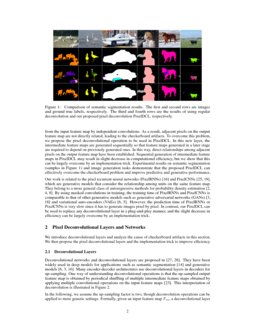 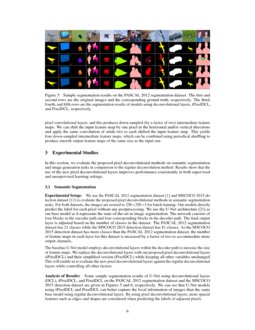 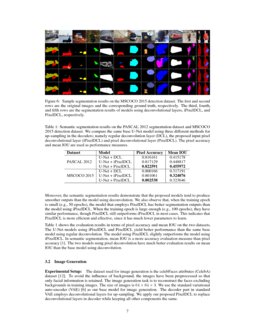 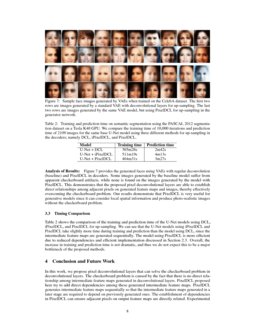 In this work, we propose a simple, efficient, yet effective method, known as the pixel deconvolutional layer (PixelDCL), to address the checkerboard problem suffered by deconvolution operations. Our method is motivated from a fresh interpretation of deconvolution operations, which clearly pinpoints the root of checkerboard artifacts. That is, the up-sampled feature map generated by deconvolution can be considered as the result of periodical shuffling of multiple intermediate feature maps computed from the input feature map by independent convolutions. As a result, adjacent pixels on the output feature map are not directly related, leading to the checkerboard artifacts. To overcome this problem, we propose the pixel deconvolutional operation to be used in PixelDCL. In this new layer, the intermediate feature maps are generated sequentially so that feature maps generated in a later stage are required to depend on previously generated ones. In this way, direct relationships among adjacent pixels on the output feature map have been established. Sequential generation of intermediate feature maps in PixelDCL may result in slight decrease in computational efficiency, but we show that this can be largely overcome by an implementation trick. Experimental results on semantic segmentation (samples in Figure 1) and image generation tasks demonstrate that the proposed PixelDCL can effectively overcome the checkerboard problem and improve predictive and generative performance.

Our work is related to the pixel recurrent neural networks (PixelRNNs)

, which are generative models that consider the relationship among units on the same feature map. They belong to a more general class of autoregressive methods for probability density estimation

(Germain et al., 2015; Gregor et al., 2015; Larochelle & Murray, 2011). By using masked convolutions in training, the training time of PixelRNNs and PixelCNNs is comparable to that of other generative models such as generative adversarial networks (GANs) (Goodfellow et al., 2014; Reed et al., 2016) and variational auto-encoders (VAEs) (Kingma & Welling, 2014; Johnson et al., 2016). However, the prediction time of PixelRNNs or PixelCNNs is very slow since it has to generate images pixel by pixel. In contrast, our PixelDCL can be used to replace any deconvolutional layer in a plug-and-play manner, and the slight decrease in efficiency can be largely overcome by an implementation trick.

PixelDCL is illustrated in Figure 5 by removing the connections denoted with dash lines. When analyzing the relationships of pixels on output feature maps, it is clear that each pixel will still rely on adjacent pixels. Therefore, the checkerboard problem can be solved with even better computational efficiency. Meanwhile, our experimental results demonstrate that the performance of models with these simplified dependencies is even better than that with complete connections. This demonstrates that repeated dependencies on the input may not be necessary.

In practice, the most frequently used up-sampling operation is to increase the height and width of input feature maps by a factor of two, e.g., from 2×2 to 4×4. In this case, the pixels on output feature maps can be divided into four groups as in Eqn. 1. The dependencies can be defined as in Figure 5. When implementing pixel deconvolutional layers, we design a simplified version to reduce sequential dependencies for better parallel computation and training efficiency as illustrated in Figure 6.

Experimental Setup: We use the PASCAL 2012 segmentation dataset (Everingham et al., 2010) and MSCOCO 2015 detection dataset (Lin et al., 2014) to evaluate the proposed pixel deconvolutional methods in semantic segmentation tasks. For both datasets, the images are resized to 256×256×3 for batch training. Our models directly predict the label for each pixel without any post-processing. Here we examine our models in two ways: training from scratch and fine-tuning from state-of-art model such as DeepLab-ResNet.

For the fine-tuning experiments, we fine-tune our models based on the architecture of DeepLab-ResNet (Chen et al., 2016). The DeepLab-ResNet model is fine-tuned from ResNet101 (He et al., 2016) and also use external data for training. The strategy of using external training data and fine-tuning from classic ResNet101 greatly boosts the performance of the model on both accuracy and mean IOU. The output of DeepLab-ResNet is eight times smaller than the input image on the height and width dimensions. In order to recover the original dimensions, we add three up-sampling blocks, each of which up-samples the feature maps by a factor of 2. For each up-sampling block, there is a deconvolutional layer followed by a convolutional layer. By employing the same strategy, we replace the deconvolutional layer by PixelDCL and iPixelDCL using kernels of the same size as in the training from scratch experiments.

Moreover, the semantic segmentation results demonstrate that the proposed models tend to produce smoother outputs than the model using deconvolution. We also observe that, when the training epoch is small (e.g., 50 epochs), the model that employs PixelDCL has better segmentation outputs than the model using iPixelDCL. When the training epoch is large enough (e.g., 100 epochs), they have similar performance, though PixelDCL still outperforms iPixelDCL in most cases. This indicates that PixelDCL is more efficient and effective, since it has much fewer parameters to learn.

Experimental Setup: The dataset used for image generation is the celebFaces attributes (CelebA) dataset (Liu et al., 2015). To avoid the influence of background, the images have been preprocessed so that only facial information is retained. The image generation task is to reconstruct the faces excluding backgrounds in training images. The size of images is 64×64×3. We use the standard variational auto-encoder (VAE) (Kingma & Welling, 2014) as our base model for image generation. The decoder part in standard VAE employs deconvolutional layers for up-sampling. We apply our proposed PixelDCL to replace deconvolutional layers in decoder while keeping all other components the same. The kernel size in DCL is 6×6, which has more parameters than PixelDCL with 2 sets of 3×3 and 1 set of 2×2 kernels.

Analysis of Results: Figure 9 shows the generated faces using VAEs with regular deconvolution (baseline) and PixelDCL in decoders. Some images generated by the baseline model suffer from apparent checkerboard artifacts, while none is found on the images generated by the model with PixelDCL. This demonstrates that the proposed pixel deconvolutional layers are able to establish direct relationships among adjacent pixels on generated feature maps and images, thereby effectively overcoming the checkerboard problem. Our results demonstrate that PixelDCL is very useful for generative models since it can consider local spatial information and produce photo-realistic images without the checkerboard problem.