Exploiting rich spatial and spectral features contributes to improve the classification accuracy of hyperspectral images (HSIs). In this paper, based on the mechanism of the population receptive field (pRF) in human visual cortex, we further utilize the spatial correlation of pixels in images and propose pixel directed acyclic graph recurrent neural network (Pixel DAG-RNN) to extract and apply spectral-spatial features for HSIs classification. In our model, an undirected cyclic graph (UCG) is used to represent the relevance connectivity of pixels in an image patch, and four DAGs are used to approximate the spatial relationship of UCGs. In order to avoid overfitting, weight sharing and dropout are adopted. The higher classification performance of our model on HSIs classification has been verified by experiments on three benchmark data sets. 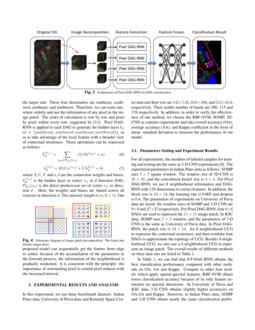 HSIs usually provide abundant spectral and spatial information of ground targets. Therefore, their interpretations such as the classification has been widely used in the geological survey, vegetation research and so on. However, the sufficient and efficient utilization of spectral and spatial information in HSIs classification is challenging such as Hughes phenomenon[1]

. A large number of researches have been done on the classification of HSIs from traditional methods such as independent component analysis (ICA)

Due to the increase of spectral dimension and nonlinear of spectral space, some traditional methods are not appropriate to classify HSIs. Subsequently, ensemble learning method is proposed for HSIs classification such as

[4]. However, most of ensemble learning methods only consider the spectral rather than spectral-spatial information. Then, some sparsity-based algorithms, for instance [5], are used to extract spatial-spectral features. These methods are incapable of capturing robust and abstract features with the complex and varied environment.

Recently, deep neural network (DNN) has attracted more attentions due to its advantages of extracting high-rank abstract features and achievements in computer vision and natural language process, such as the images classification

[6] and speech recognition [7]. Y. Chen et al.[8] proposed 3-D CNN, it is the first time to extract spectral-spatial features of HSIs simultaneously by DCNN, and this method improves classification performance obviously. L. Mou et al. [9] take hyperspectral pixels as sequential data and apply recurrent neural network (RNN) to classify HSIs. These above methods extract robust spatial-spectral information in HSIs classification by multilayer convolutional neural network. We know, these convolution processes used to extract pixel features utilize the ideology of receptive field. However, this operation only extracts the feature of every pixel and ignore the correlation of adjacent pixels which is significant to realize category in the pRF. For detail, the perception ability of the pRF in the human visual cortex[10] is related to the focus of the vision and surrounding scenes. The influence of surrounding scenes on the central target reduces with the increase of interval. Here, we use UCG and DAG to describe this relation. Due to the ability of RNN on dealing with sequence data, we proposed a Pixel DAG-RNN model for HSIs classification.

This new method has three advantages: (1) Our model further applies the pRF mechanism of the human visual system in identifying the pixel category. Besides the pixel feature, we further consider the spatial correlation of adjacent pixels. (2) We apply UCGs and DAGs to represent the correlation of pixels and RNN to apply spatial sequence features for HSIs classification. This model makes full use of both spectral information and spatial correlations of pixels. (3) In order to prevent the overfitting phenomenon caused by a limited number of training samples, weight sharing and dropout are used.

We know, in the human vision system, that sounding scenes also affect the realization of the central target and these effects obey visual mechanism. In the pRF mechanism of the human visual system, which illustrated in Fig.1 (a), more intensive attentions are focused on the central target and the attentions on sounding scenes because blur and sparse with increased distance as shown in Fig.1 (b). Based on this theoretical mechanism, we utilize the same principle of identifying pixel categories. The importance of surrounding layer pixels on central pixel reduces with the increased interval. Fig.1 (c) shows the reduced importance of surrounding pixel layers on a central pixel by shallower color. Fig.1 (d) express the variance curve of the importance of surrounding pixel layers on the central pixel with the distance. These rules demonstrate the importance of spatial structure sequentiality in understanding images. In addition, RNN is more suitable for processing sequence data. Therefore, on the basis of the mechanism of pRF mechanism of the human visual system in HSIs classification, we used UCGs and DAGs to connect pixels and design Pixel DAG-RNN to extract spectral-spatial features.

As shown in Fig. 2, a sample of directed acyclic graph (DAG) can be represented as G={V,A}, where V={vij} denotes the vertex set and A={−−−→vijvpq} denotes the arc set, which i,p represent the row and j,q represent the column from 1 to n, −−−→vijvpq represents the arc from vertex vij to vpq. We can get a series of contextual dependencies among vertexes and input them to a recurrent neural network. Subsequently, hidden layer h are generated with the same structure as G. h(vij) denotes the value of hidden layer at vij, which is related to its local input x(vij)

and the hidden representation of its predecessors. Due to the special structure of hidden layer

h, we should calculate it sequentially. The hidden layer h and output ^y are computed as follows:

where S,U,V,W and a,b,c represent the connection weights and biases. PG(vij) is the direct predecessor set of vertex vij in the DAG, F(⋅), G(⋅) and H(⋅)

are the nonlinear activation functions. From the above formulas, we can see that this is an autoregressive model with the following conditional distributions:

The recurrent weights S,U,V are shared in order to avoid overfitting. When calculating the hidden layer h, we start at the DAG’s source vertex v11 and calculate the next vertex of the hidden layer according to the structure of DAG, until to the last vertex vnn. Therefore, h(vnn) include the information of all the DAG’s vertex. A nonlinear function F(⋅) is used to obtain the final output ^y. Loss l is denoted as follows:

In HSIs classification, each pixel having hundreds of spectral data is classified into a class of object. In order to apply the neighborhood information, we use UCG to represent the spatial relationship of the image

patch and then apply four different DAGs to approximate the topology of the UCG. Based on DAG’s definition in spatial structural sequentiality of pixels, we apply DAG-RNNs model to classify HSIs for making full use of the spatial structural sequentiality of pixels as shown in Fig. 3. The spectral-spatial features are extracted by Pixel DAG-RNNs, and then we concatenate the four feature vectors at the end vertex to a final vector. Two full connection layers and softmax are used for the final classification.

The detail of using DAGs to approximate UCG is illustrated in Fig. 4. Suppose we make an image patch with the size of n×n. The black unit denotes the target pixel. 8 neighborhood UCG is used to represent the spatial relationship of pixels. Because of its loopy property, we can’t get a fixed sequence applied in RNNs. In order to fully use the semantic contextual dependencies of the image patch, we use the combination of a set of small DAGs with the height and width being (n/2+1) to represent the UCG. Four 8 neighborhood DAGs are respectively used in the end vertex as the target unit. Those four dictionaries are southeast, southwest, northeast, and northwest. Therefore, we can route anywhere orderly and use the information of any pixel in the image patch. The order of calculation is row by row and pixel by pixel within every row, suggested by [11]. Pixel DAG-RNN is applied to each DAG to generate the hidden layer hd (d∈{southeast,southwest,northeast,northwest}), so as to take advantage of the local feature with a broader view of contextual awareness. Those operations can be expressed as follows:

Our proposed model can sequentially get the feature from edge to center, because of the accumulation of the parameters in the forward process, the information of the neighborhood is gradually weakened. It is consistent with the principle: the importance of surrounding pixel to central pixel reduces with the increased interval.

, respectively. Their usable number of bands are 200, 115 and 176 respectively. In addition, in order to verify the effectiveness of our method, we choose the RBF-SVM, SOMP, 3D-CNN as contrast experiments and take overall accuracy (OA), average accuracy (AA), and Kappa coefficient in the form of mean standard deviation to measure the performance of our model.

For all experiments, the numbers of labeled samples for training and testing are the same as 3-D CNN experiments[8]. The experiment parameters in Indian Pines data as follows: SOMP uses 7×7 square window. The window size of 3D-CNN is 31×31, and the convolution kernel size is 4×4. For Pixel DAG-RNN, we use 8 neighborhood information and DAG-RNN with 128 dimensions to extract features. In addition, the block size is 13×13, the learning rate is 0.005 and dropout is 0.4. The parameters of experiments on University of Pavia data are listed: the window sizes of SOMP and 3-D CNN are 9×9 and 27×27 respectively. For Pixel DAG-RNN, four 6×6 DAGs are used to represent the 11×11 image patch. In KSC data, SOMP uses 7×7 window, and the parameters of 3-D CNN is the same as University of Pavia data. In Pixel DAG-RNN, the patch size is 13×13. An 8 neighborhood UCG to represent the contextual awareness, and then combine four DAGs to approximate the topology of UCG. Besides 8 neighborhood UCG, we also use a 4 neighborhood UCG to represent an image patch. The overall results of different methods on three data sets are listed in Table 1.

For further expressing contributions of our model on each class, we listed the classification accuracies of all categories on KSC data in Table 2. From Table 2, we find that 8-P-DAG-RNN obtains the highest accuracy in 8 of 13 categories, such as ”Surb”, ”Slash pine”, ”Graminoid marsh”, ”Spartina marsh”, ”Cattail marsh”, ”Salt marsh”, ”Mud flats”, ”Water”. Other five classes obtain the second or third high accuracy because of their fewer training samples. In addition, we analyse the influence of memory length on classification accuracy. As mentioned in 3.2, an image patch can be decomposed into four small image patches and the size of small image patch is called as memory length, such as the memory length of Fig. 4 is 4. Through experiments with different memory length(m={5,6,7,8}) of image patches on three datasets, we find that when the memory length is 6, the University of Pavia dataset can reach the best performance(OA = 99.29length for the Indian Pines and KSC datasets is 7

In this paper, we use Pixel DAG-RNN to extract spectral-spatial features for HSIs classification. It can effectively exploit the spatial correlation of pixels by UCG and then combination of four directed acyclic graphs (DAGs) to approximate the UCG s topology. In addition, this model also utilizes the advantage of RNN on extracting and using sequence data in network architecture. The superiority of Pixel DAG-RNN has been verified by experiments on three benchmark HSIs data sets. Further, weights sharing and dropout are used to prevent overfitting. The future work will devote to use pixel information efficiently.