In this report, we introduce an artificial dataset generator for Photo-realistic Blocksworld domain. Blocksworld is one of the oldest high-level task planning domain that is well defined but contains sufficient complexity, e.g., the conflicting subgoals and the decomposability into subproblems. We aim to make this dataset a benchmark for Neural-Symbolic integrated systems and accelerate the research in this area. The key advantage of such systems is the ability to obtain a symbolic model from the real-world input and perform a fast, systematic, complete algorithm for symbolic reasoning, without any supervision and the reward signal from the environment. 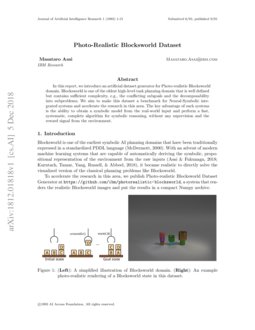 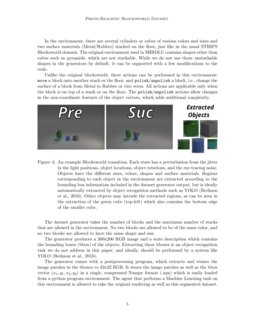 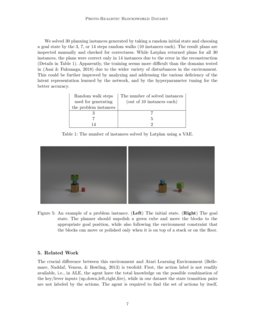 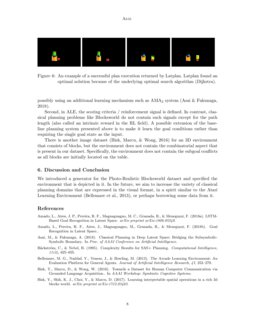 We analyze the spaces of images encoded by generative networks of the Bi...
Romuald A. Janik, et al. ∙

Recently, there is an increasing interest in obtaining the relational st...
Masataro Asai, et al. ∙

. With an advent of modern machine learning systems that are capable of automatically deriving the symbolic, propositional representation of the environment from the raw inputs

In this document, we first describe the Blocksworld domain, then proceed to the details of the dataset and the extension added to the environment. Finally, we show the results of some baseline experiments of an existing Neural-Symbolic planning system Latplan [Asai  FukunagaAsai  Fukunaga2018] applied to this dataset.

Blocksworld is a domain which was proposed in SHRDLU [WinogradWinograd1971]

interactive natural language understanding program, which takes a command input given as a natural language text string, invokes a planner to achieve the task, then display the result. It is still used as a testbed for evaluating various computer vision / dialog systems

Blocksworld domain typically consists of several stacks of wooden blocks placed on a table, and the task is to reorder and stack the blocks in a specified configuration. The blocks are named (typically assigned an alphabet) and are supposed to be identifiable, but in the real world, the color could replace the ID for each block.

In order to move a block b, the block should be clear of anything on the block itself, i.e., it should be on top of a stack, so that the arm can directly grasp a single block without hitting another object. This restriction allows the arm to grasp only a single block at a time. While this condition could be expressed in a quantified first-order formula using a predicate on, e.g., ∀b2;¬\small on(b,b2), typically this is modeled with an auxiliary predicate clear with an equivalent meaning.

There are a couple of variations to this domain such as the one which explicitly involves the concept of a robotic arm. In this variation, moving a block is decomposed into two actions, e.g., pick-up and put-down, where pick-up action requires a handempty nullary predicate to be true. The handempty predicate indicates that the arm is currently holding nothing, and can grasp a new block. These predicates could be trivially extended to a multi-armed scenario where pick-up and handempty could take an additional ?arm argument, but we do not add such an extension in our dataset.

When modeled as a pure STRIPS domain where the disjunctive preconditions (or’s in the preconditions) are prohibited, the actions can be further divided into pick-up/put-down actions and unstack/stack action, wherein pick-up/put-down the arm grasps/releases a block from/onto the table, while in stack/unstack the arm grasps a block from/onto another block. An example PDDL representation of such a model is presented in Fig. 2.

The domain has further variations such as those containing the size constraint (a larger block cannot be put on a smaller block) or other non-stackable shapes (spheres or pyramids) [Gupta  NauGupta  Nau1992], but we do not consider them in this dataset.

The problem has been known for exhibiting the subgoal interactions caused by the delete effects, which introduced the well-known Sussman’s anomaly [SussmanSussman1973, SacerdotiSacerdoti1975, WaldingerWaldinger1975, McDermott  CharniakMcDermott  Charniak1985, NorvigNorvig1992]. The anomaly states that achieving some subgoal requires destroying an already achieved subgoal once (and restore it later). This characteristic makes the problem difficult as the agent needs to consider how to construct the subgoals in the correct order (subgoal ordering). Later, the class of problem containing such interaction was shown to make the planning problem PSPACE-complete while the delete-free planning problem was shown to be only NP-complete [Bäckström  NebelBäckström  Nebel1995].

Solving the Blocksworld problem suboptimally, i.e., without requiring to return the fewest number of moves that solves the problem, is tractable. Indeed, we can solve the problem in linear time in the following algorithm: First, put-down all blocks onto the floor, then construct the desired stacks. This procedure finishes in a number of steps linear to the number of blocks. In contrast, the decision problem version of the optimization problem, i.e., “Given an integer L>0, is there any path that achieves the goal state under L steps?” is shown to be NP-hard [Gupta  NauGupta  Nau1992].

More recently, an in-depth analysis on the suboptimal / approximation algorithms and the problem generation method was performed on the domain [Slaney  ThiébauxSlaney  Thiébaux2001], showing that the domain is still able to convey valuable lessons when analyzing the performance of modern planners.

The code base for the dataset generator is a fork of CLEVR dataset generator where the rendering code was reused, with modifications to the logic for placing objects and enumerating the valid transitions. It renders the constructed scenes in Blender 3D rendering engine which can produce a photorealistic image generated by ray-tracing (Fig. 1, right).

In the environment, there are several cylinders or cubes of various colors and sizes and two surface materials (Metal/Rubber) stacked on the floor, just like in the usual STRIPS Blocksworld domain. The original environment used in SHRDLU contains shapes other than cubes such as pyramids, which are not stackable. While we do not use those unstackable shapes in the generators by default, it can be supported with a few modifications to the code.

Unlike the original blocksworld, three actions can be performed in this environment: move a block onto another stack or the floor, and polish/unpolish a block, i.e., change the surface of a block from Metal to Rubber or vice versa. All actions are applicable only when the block is on top of a stack or on the floor. The polish/unpolish

actions allow changes in the non-coordinate features of the object vectors, which adds additional complexity.

The generator produces a 300x200 RGB image and a state description which contains the bounding boxes (bbox) of the objects. Extracting these bboxes is an object recognition task we do not address in this paper, and ideally, should be performed by a system like YOLO [Redmon, Divvala, Girshick,  FarhadiRedmon et al.2016].

The generator comes with a postprocessing program, which extracts and resizes the image patches in the bboxes to 32x32 RGB. It stores the image patches as well as the bbox vector (x1,y1,x2,y2) in a single, compressed Numpy format (.npz) which is easily loaded from a python program environment. The agent that performs a Machine Learning task on this environment is allowed to take the original rendering as well as this segmented dataset.

The generator enumerates all possible states/transitions (480/2592 for 3 blocks and 3 stacks; 80640/518400 for 5 blocks and 3 stacks). Since the rendering could take time, the script provides support for a distributed cluster environment with a batch scheduling system.

To demonstrate the baseline performance of an existing Neural-Symbolic planning system, We modified Latplan [Asai  FukunagaAsai  Fukunaga2018] image-based planner, a system that operates on a discrete symbolic latent space of the real-valued inputs and runs Dijkstra’s/A* search using a state-of-the-art symbolic classical planning solver. We modified Latplan to take the set-of-object-feature-vector input rather than images.

Latplan system learns the binary latent space of an arbitrary raw input (e.g. images) with a Gumbel-Softmax variational autoencoder (State AutoEncoder network, SAE), learns a discrete state space from the transition examples, and runs a symbolic, systematic search algorithm such as Dijkstra or A* search which guarantee the optimality of the solution. Unlike RL-based planning systems, the search agent does not contain the learning aspects. The discrete plan in the latent space is mapped back to the raw image visualization of the plan execution, which requires the reconstruction capability of (V)AE. A similar system replacing Gumbel Softmax VAE with Causal InfoGAN was later proposed

When the network learned the representation, it guarantees that the planner finds a solution because the search algorithm being used (e.g. Dijkstra) is a complete, systematic, symbolic search algorithm, which guarantees to find a solution whenever it is reachable in the state space. If the network cannot learn the representation, the system cannot solve the problem and/or return the human-comprehensive visualization.

We generated a dataset for a 4-blocks, 3-stacks environment, whose search space consists of 5760 states and 34560 transitions. We provided 2500 randomly selected states for training the autoencoder.

We tested the generated representation with AMA1 PDDL generator [Asai  FukunagaAsai  Fukunaga2018] and the Fast Downward [HelmertHelmert2004] classical planner. AMA1 is an oracular method that takes the entire raw state transitions, encode each {prei,suci} pair with the SAE, then instantiate each encoded pair into a grounded action schema. It models the ground truth of the transition rules, thus is useful for verifying the state representation. Planning fails when SAE fails to encode a given init/goal image into a propositional state that exactly matches one of the search nodes. While there are several learning-based AMA methods that approximate AMA1 (e.g. AMA2 [Asai  FukunagaAsai  Fukunaga2018] and Action Learner [Amado, Pereira, Aires, Magnaguagno, Granada,  MeneguzziAmado et al.2018b, Amado, Aires, Pereira, Magnaguagno, Granada,  MeneguzziAmado et al.2018a]), there is information loss between the learned action model and the original search space generated.

We invoked Fast Downward with blind heuristics in order to remove its effect. This is because AMA

1 generates a huge PDDL model containing all transitions which result in an excessive runtime for initializing any sophisticated heuristics. The scalability issue caused by using a blind heuristics is not an issue since the focus of this evaluation is on the feasibility of the representation.

We solved 30 planning instances generated by taking a random initial state and choosing a goal state by the 3, 7, or 14 steps random walks (10 instances each). The result plans are inspected manually and checked for correctness. While Latplan returned plans for all 30 instances, the plans were correct only in 14 instances due to the error in the reconstruction (Details in Table 1). Apparently, the training seems more difficult than the domains tested in [Asai  FukunagaAsai  Fukunaga2018]

due to the wider variety of disturbances in the environment. This could be further improved by analyzing and addressing the various deficiency of the latent representation learned by the network, and by the hyperparameter tuning for the better accuracy.

The crucial difference between this environment and Atari Learning Environment [Bellemare, Naddaf, Veness,  BowlingBellemare et al.2013] is twofold: First, the action label is not readily available, i.e., in ALE, the agent have the total knowledge on the possible combination of the key/lever inputs (up,down,left,right,fire), while in our dataset the state transition pairs are not labeled by the actions. The agent is required to find the set of actions by itself, possibly using an additional learning mechanism such as AMA2 system [Asai  FukunagaAsai  Fukunaga2018].

Second, in ALE, the scoring criteria / reinforcement signal is defined. In contrast, classical planning problems like Blocksworld do not contain such signals except for the path length (also called an intrinsic reward in the RL field). A possible extension of the baseline planning system presented above is to make it learn the goal conditions rather than requiring the single goal state as the input.

We introduced a generator for the Photo-Realistic Blocksworld dataset and specified the environment that is depicted in it. In the future, we aim to increase the variety of classical planning domains that are expressed in the visual format, in a spirit similar to the Atari Learning Environment [Bellemare, Naddaf, Veness,  BowlingBellemare et al.2013], or perhaps borrowing some data from it.