Recent studies have shown that frame-level deep speaker features can be derived from a deep neural network with the training target set to discriminate speakers by a short speech segment. By pooling the frame-level features, utterance-level representations, called d-vectors, can be derived and used in the automatic speaker verification (ASV) task. This simple average pooling, however, is inherently sensitive to the phonetic content of the utterance. An interesting idea borrowed from machine translation is the attention-based mechanism, where the contribution of an input word to the translation at a particular time is weighted by an attention score. This score reflects the relevance of the input word and the present translation. We can use the same idea to align utterances with different phonetic contents. This paper proposes a phonetic-attention scoring approach for d-vector systems. By this approach, an attention score is computed for each frame pair. This score reflects the similarity of the two frames in phonetic content, and is used to weigh the contribution of this frame pair in the utterance-based scoring. This new scoring approach emphasizes the frame pairs with similar phonetic contents, which essentially provides a soft alignment for utterances with any phonetic contents. Experimental results show that compared with the naive average pooling, this phonetic-attention scoring approach can deliver consistent performance improvement in ASV tasks of both text-dependent and text-independent. 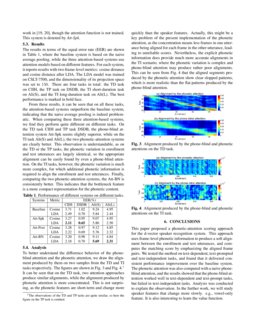 [1], the joint factor analysis model [2] and the i-vector model [3, 4, 5]. As for the neural model approach, Ehsan et al. proposed the first successful implementation [6], where frame-level speaker features were extracted from a deep neural network (DNN), and utterance-level speaker representations (‘d-vectors’) were derived by averaging the frame-level features, i.e., average pooling. This work was followed by a bunch of researchers [7, 8, 9, 10].

The neural-based approach is essentially a feature learning approach, i.e., learning frame-level speaker features from raw speech. In previous work, we found that by this feature learning, speakers can be discriminated by a speech segment as short as 0.3 seconds [10], either a word or a cough [11]. However, with the conventional d-vector pipeline, this brilliant frame-level discriminatory power cannot be fully utilized by the utterance-level ASV, due to the simple average pooling. This shortage was quickly identified by researchers, and hence almost all the studies after Ehsan et al. [6] chose to learn representations of segments rather than frames, the so-called end-to-end approach [8, 12, 13, 14]. However, frame-level feature learning possesses its own advantages in both generalizability and ease of training [15], and meets our long-term desire of deciphering speech signals [16]. An ideal approach, therefore, is to keep the feature learning framework but solve the problem caused by average pooling.

To understand the problem of average pooling, first notice that feature pooling is equivalent to score pooling. To make the presentation clear, we consider the simple inner product score:

where u and u′ are two utterances in test, f denotes frames; →vf and →su are frame-level speaker features and utterance-level d-vectors, respectively. A simple arrangement leads to:

This formula indicates that with average pooling, the utterance-level score →su⋅→su′ is the average of the frame-level scores →vf⋅→vf′. Most importantly, the scores of all the frame pairs (f,f′) are equally weighted, which is obviously suboptimal, as the reliability of scores from different frame pairs may be substantially different. In particular, a pair of frames in the same phonetic context may result in a much more reliable frame-level score compared to a pair in different phonetic context, as demonstrated by the fact that text-dependent ASV generally outperforms text-independent ASV. This indicates that a key problem of the average pooling method is that phonetic variation may cause serious performance degradation. This partly explains why d-vector systems are mostly successful in text-dependent tasks.

The idea of soft-alignment was motivated by the attention mechanism

[17], where the contribution of an input word to the translation at a particular time is weighted by an attention score, and this attention score reflects the relevance of the input word and the present translation. We therefore name our new scoring model by Eq. (1) as phonetic-attention scoring. By paying more attention to frame pairs in similar phonetic contents, this new scoring approach essentially turns a text-independent task to a text-dependent task, hence partly solving the problem caused by phone variation with the naive average pooling .

In the next section, we will briefly describe the attention mechanism. The phonetic-attention scoring approach will be presented in Section 3, and the experiments will be reported in Section 5. The entire paper will be concluded in Section 6.

The attention mechanism was firstly proposed by [17] in the framework of sequence to sequence learning, and was applied to NMT. Recently, this model has been widely used in many sequential learning tasks, e.g., speech recognition [18]. In a nutshell, the attention approach looks up all the input elements (e.g., words in a sentence or frames in an utterance) at each decoding time, and computes an attention weight for each element that reflects the relevance of that element with the present decoding. Based on these attention weights, the information of the input elements is collected and used to guide decoding. As shown in Fig. 1, at decoding time t, the attention weight αt,i is computed for each input element →xi (more precisely, the annotation of →xi, denoted by →hi), formally written as:

where →zt−1 is the decoding status at time t, and g is a value function that can be in any form. σ is a normalization function (usually softmax) that ensures ∑iαt,i=1. The decoding for →yt is then formally written as:

We borrow the architecture shown in Fig. 1

to build our phonetic-attention model in Eq. (

1). Since our purpose is to align two existing sequences rather than sequence to sequence generation, the structure can be largely simplified. For example, the recurrent connection in both the input and output sequence can be omitted. Secondly, in Fig. 1, the value function g is learned from data; for our scoring model, we have a clear goal to align utterances by phonetic content, so we can design the value function by hand (although function learning with prior may help). This leads to the phonetic-attention model shown in Fig. 2.

The architecture and the associated scoring method can be summarized into the following four steps:

where the KL−1(⋅,⋅) denotes the reciprocal of KL distance. This step is represented by the red dashed line in Fig. 2.

(3) Compute the matching score of frame t in the test utterance as follows:

This step is represented by the green solid line in Fig. 2.

The attention mechanism has been studied by several authors in ASV, e.g., [13, 19, 20]. However, most of the proposals used the attention mechanism to produce a better frame pooling, while we use it to produce a better utterance alignment. In essence, these methods learn which frame should contribute to the speaker embedding, while our approach learn which frame-pair should contribute to the matching score. Moreover, most of these studies do not use phonetic knowledge explicitly, except [13].

Another work relevant to ours is the segmental dynamic time warping (SDTW) approach proposed by Mohamed et al. [21]. This work holds the same idea as ours in aligning frame-level speaker features, however their alignment is based on local temporal continuity, while ours is based on global phonetic contents.

The data used to train the d-vector systems is the CSLT-7500 database, which was collected by CSLT@Tsinghua University. It consists of 7,500 speakers and 1,532,766 utterances. The sampling rate is 16 kHz and the precision is 16-bit. Data augmentation is applied to cover more acoustic conditions, for which the MUSAN corpus [22] is used to provide additive noise, and the room impulse responses (RIRS) corpus [23] is used to generate reverberated samples.

(1) CIIH: a dataset contains short commands used in the intelligent home scenario. It contains recordings of 10 short commands from 100 speakers, and each command consists of 2∼5 Chinese characters. For each speaker, every command is recorded 15 times, amounting to 150 utterances per speaker. This dataset is used to evaluate the text-dependent (TD) task.

The phonetic-attention model requires frame-level phonetic features. We built a DNN-HMM hybrid system using Kaldi following the WSJ S5 recipe. The training used 500 hours of Chinese speech data. The model is a TDNN, and each layer contains 512 nodes. The output layer contains 463 units, corresponding to the number of GMM senones. Once the model was trained, 463-dimensional phone posteriors were derived from the output layer and were used as phonetic features. The phonetic-attention system based on the phone posteriors is denoted by Att-Post

. Another type of phonetic features can be derived from the final affine layer. To compress the size of the feature vector, the Singular Value Decomposition (SVD) was applied to decompose the final affine matrix into two low-rank matrices, where the rank was set to

Finally, we built a phone-blind attention system where the attention weight is computed from the speaker feature itself, rather than phonetic features. This approach is similar to the work in [19, 20], though the attention function is not trained. This system is denoted by Att-Spk.

The results in terms of the equal error rate (EER) are shown in Table 1, where the baseline system is based on the naive average pooling, while the three attention-based systems use attention models based on different features. For each system, it reports results with two frame-level metrics: cosine distance and cosine distance after LDA. The LDA model was trained on CSLT-7500, and the dimensionality of its projection space was set to 150. There are four tasks in total: the TD task on CIIH, the TP task on DSDB, the TI short-duration task on Ali(S), and the TI long-duration task on Ali(L). The best performance is marked in bold face.

From these results, it can be seen that on all these tasks, the attention-based systems outperform the baseline system, indicating that the naive average pooling is indeed problematic. When comparing these three attention-based systems, we find they perform quite different on different tasks. On the TD task CIIH and TP task DSDB, the phone-blind attention system Att-Spk seems slightly superior, while on the TI task Ali(S) and Ali(L), the two phonetic-attention systems are clearly better. This observation is understandable, as on the TD or the TP tasks, the phonetic variation in enrollment and test utterances are largely identical, so the appropriate alignment can be easily found by even a phone-blind attention. On the TI tasks, however, the phonetic variation is much more complex, for which additional phonetic information is required to align the enrollment and test utterances. Finally, comparing the two phonetic-attention systems, the Att-BN is consistently better. This indicates that the bottleneck feature is a more compact representation for the phonetic content.

This paper proposed a phonetic-attention scoring approach for the d-vector speaker recognition system. This approach uses frame-level phonetic information to produce a soft alignment between the enrollment and test utterances, and computes the matching score by emphasizing the aligned frame pairs. We tested the method on text-dependent, text-prompted and text-independent tasks, and found that it delivered consistent performance improvement over the baseline system. The phonetic attention was also compared with a naive phone-blind attention, and the results showed that the phone-blind attention worked well in text-dependent and text-prompt tasks, but failed in text-independent tasks. Analysis was conducted to explain the observation. In the further work, we will study speaker features that change more slowly. e.g., vowel-only feature. It is also interesting to learn the value function.