We present PhoBERT with two versions of "base" and "large"–the first public large-scale monolingual language models pre-trained for Vietnamese. We show that PhoBERT improves the state-of-the-art in multiple Vietnamese-specific NLP tasks including Part-of-speech tagging, Named-entity recognition and Natural language inference. We release PhoBERT to facilitate future research and downstream applications for Vietnamese NLP. Our PhoBERT is released at: https://github.com/VinAIResearch/PhoBERT 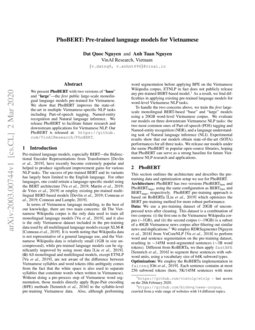 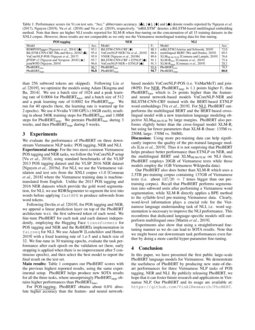 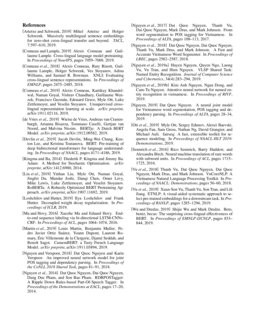 To handle the two concerns above, we train the first

large-scale monolingual BERT-based “base” and “large” models using a 20GB word-level Vietnamese corpus. We evaluate our models on three downstream Vietnamese NLP tasks: the two most common ones of Part-of-speech (POS) tagging and Named-entity recognition (NER), and a language understanding task of Natural language inference (NLI). Experimental results show that our models obtain state-of-the-art (SOTA) performances for all three tasks. We release our models under the name PhoBERT in popular open-source libraries, hoping that PhoBERT can serve as a strong baseline for future Vietnamese NLP research and applications.

This section outlines the architecture and describes the pre-training data and optimization setup we use for PhoBERT.

Data: We use a pre-training dataset of 20GB of uncompressed texts after cleaning. This dataset is a combination of two corpora: (i) the first one is the Vietnamese Wikipedia corpus (∼1GB), and (ii) the second corpus (∼19GB) is a subset of a 40GB Vietnamese news corpus after filtering out similar news and duplications.222https://github.com/binhvq/news-corpus, crawled from a wide range of websites with 14 different topics. We employ RDRSegmenter [Nguyen et al.2018] from VnCoreNLP [Vu et al.2018] to perform word and sentence segmentation on the pre-training dataset, resulting in ∼145M word-segmented sentences (∼3B word tokens). Different from RoBERTa, we then apply fastBPE [Sennrich et al.2016] to segment these sentences with subword units, using a vocabulary size of 64K subword types.

base and 1.08M steps for PhoBERTlarge. We pretrain PhoBERTbase during 3 weeks, and then PhoBERTlarge during 5 weeks.

Experimental setup: For the two most common Vietnamese POS tagging and NER tasks, we follow the VnCoreNLP setup [Vu et al.2018], using standard benchmarks of the VLSP 2013 POS tagging dataset and the VLSP 2016 NER dataset [Nguyen et al.2019a]. For NLI, we use the Vietnamese validation and test sets from the XNLI corpus v1.0 [Conneau et al.2018] where the Vietnamese training data is machine-translated from English. Unlike the 2013 POS tagging and 2016 NER datasets which provide the gold word segmentation, for NLI, we use RDRSegmenter to segment the text into words before applying fastBPE to produce subwords from word tokens.

Following devlin-etal-2019-bert devlin-etal-2019-bert, for POS tagging and NER, we append a linear prediction layer on top of the PhoBERT architecture w.r.t. the first subword token of each word. We fine-tune PhoBERT for each task and each dataset independently, employing the Hugging Face transformers for POS tagging and NER and the RoBERTa implementation in fairseq for NLI. We use AdamW [Loshchilov and Hutter2019] with a fixed learning rate of 1.e-5 and a batch size of 32. We fine-tune in 30 training epochs, evaluate the task performance after each epoch on the validation set (here, early stopping is applied when there is no improvement after 5 continuous epochs), and then select the best model to report the final result on the test set.

NER, PhoBERTlarge is 1.1 points higher F1 than PhoBERTbase which is 2+ points higher than the feature- and neural network-based models VnCoreNLP-NER and BiLSTM-CNN-CRF trained with the BERT-based ETNLP word embeddings [Vu et al.2019]. For NLI, PhoBERT outperforms the multilingual BERT and the BERT-based cross-lingual model with a new translation language modeling objective XLMMLM+TLM by large margins. PhoBERT also performs slightly better than the cross-lingual model XLM-R, but using far fewer parameters than XLM-R (base: 135M vs. 250M; large: 370M vs. 560M).

Discussion: Using more pre-training data can help significantly improve the quality of the pre-trained language models [Liu et al.2019]. Thus it is not surprising that PhoBERT helps produce better performance than ETNLP on NER, and the multilingual BERT and XLMMLM+TLM on NLI (here, PhoBERT employs 20GB of Vietnamese texts while those models employ the 1GB Vietnamese Wikipedia data).

Experiments also show that using a straightforward fine-tuning manner as we do can lead to SOTA results. Note that we might boost our downstream task performances even further by doing a more careful hyper-parameter fine-tuning.

In this paper, we have presented the first public large-scale PhoBERT language models for Vietnamese. We demonstrate the usefulness of PhoBERT by producing new state-of-the-art performances for three Vietnamese NLP tasks of POS tagging, NER and NLI. By publicly releasing PhoBERT, we hope that it can foster future research and applications in Vietnamse NLP. Our PhoBERT and its usage are available at: https://github.com/VinAIResearch/PhoBERT.