Medical image processing tasks such as segmentation often require capturing non-local information. As organs, bones, and tissues share common characteristics such as intensity, shape, and texture, the contextual information plays a critical role in correctly labeling them. Segmentation and labeling is now typically done with convolutional neural networks (CNNs) but the context of the CNN is limited by the receptive field which itself is limited by memory requirements and other properties. In this paper, we propose a new attention module, that we call Permutohedral Attention Module (PAM), to efficiently capture non-local characteristics of the image. The proposed method is both memory and computationally efficient. We provide a GPU implementation of this module suitable for 3D medical imaging problems. We demonstrate the efficiency and scalability of our module with the challenging task of vertebrae segmentation and labeling where context plays a crucial role because of the very similar appearance of different vertebrae. 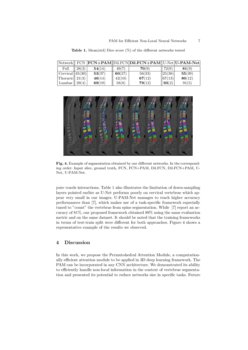 In this paper, we propose a new self-attention module called Permutohedral Attention Module (PAM), which makes use of the efficient algorithm approximation of the Permutohedral Lattice [1]. We adapted the algorithm of [1], originally designed to perform denoising, into a trainable module able to capture and process contextual information. Our module, similarly to the original non-local self-attention mechanism formulation, dynamically adapts the receptive field of each variable in a learned way while being, in contrast to [12], applicable to medical images as it has low memory requirements, computationally scaling as O(N). We evaluate our module on the challenging task of vertebrae segmentation. Vertebrae segmentation aims to label each individual vertebra and is used in practice as an initial step of various pipelines such as modality fusion, spine surgery planning and surgical guidance. As consecutive vertebrae have very similar local appearance, non-local information is compelling to identify them.

In Section 2, we first define self-attention and how it has been used, we then introduce the PAM. In section 3 we first highlight the capability of our module to capture and process contextual information without requiring a deep architecture. Then, we demonstrate its capability to improve state of the art segmentation architectures for vertebrae segmentation.

where ⋅ represents the matrix multiplication operator. This formulation has two principal strengths; it can increase the receptive field of each output variable up to the whole input, and it can modulate the receptive field of each output variable with respect to the input characteristics. To our knowledge, attention modules in deep learning either compute the entire self-attention matrix on a low dimensional input or use a local attention mechanism that can be seen as a strong approximation of the non-local self-attention formulation. Specifically in the medical imaging context, previous works [11, 14, 10] implicitly used a simplification of (2) with a diagonal self-attention matrix. This solution can be applied to large images since it scales linearly with the number of voxels but does not help to capture contextual information.

Different implementations of the non-local self-attention matrix are listed in [12]. These can be unified as follows:

where ϕ=(ϕ1,ϕ2) is a pair of embedding functions (possibly identities) and γ

is typically either identity, exponential or ReLU. Hence, these approaches are impractical to apply to 3D images because the number of interactions to be computed scales as

The proposed PAM relies on a slightly different formulation of the self-attention matrix to align more closely with the formulation of the non-local means filtering algorithm [3] used in the denoising literature. When applied to the set of feature-descriptor pairs (fi,vi)i≤n (where n is the number of variables described), non-local mean gives the set of filtered descriptors:

is the corresponding attention formulation with fϕ a feature extractor network (ϕ its parameter set).

Avoiding a brute-force computation of (4), we adapted the Permutohedral Lattice approximation algorithm [1]

to estimate the self-attention module output

v′ϕ,ψ(x)=Aϕ(x)⋅vψ(x) in O(N) against O(N2) for the original non-local neural network formulations listed in [12]. Learning the parameter sets ϕ and ψ is achieved through back-propagation. Hence, the PAM can be integrated in a deep learning framework to compute self-attention for high dimensional inputs (cf. Section 3.0.3 for concrete architectures examples). The PAM approximates the proposed attention mechanism in 4 steps: embedding of the features into the Permutohedral Lattice higher dimensional space, Splat, Blur and Slice, as illustrated in Fig. 1. Each of these steps scales linearly in N.

The advantage of this approximation algorithm against other possibilities [2, 5]

is that the gradients with respect to the input feature vectors

where E is the embedding operator, S is the Splat operator, B is the Blur operator and Sl is the Slice operator. With the same notations, the backward pass can be expressed as:

where L is the loss and ∀a,bBSE(a,b)=B(S(E(a),b)) (similarly with ~BSE). ~B is the Gaussian blurring operator where the Gaussian blur is applied in the reverse order in terms of direction of the Lattice. E is the position embedding matrix and σi is permutation computed during E.

We evaluate the impact of PAM for non-local neural networks for the task of simultaneous segmentation and labeling of vertebrae. We performed our experiment on the CSI 2014 workshop challenge data111http://spineweb.digitalimaginggroup.ca/, which consists of 20 CT images. We used all 20 CT images in our framework using a 5-fold cross validation for evaluation. We resampled the data to obtain (1mm, 1mm, 3mm) voxels.

We implemented the PAM as well as all our pipelines using Pytorch. We optimized our networks with ADAM on

and a batch size of 1. We used the Dice loss as loss function. Our implementation is publicly available

Figure 2 represents the Dil.FCN+PAM architecture. In this figure, we observe that, once we obtain the features f=(f1,..fN) and descriptors v=(v1,..vN) to compute attention, we split each feature and descriptor vector in two. Hence we obtain two sets of feature-descriptor pairs (f0i,v0i)i≤N and (f1i,v1i)i≤N on which we apply the PAM independently. There are two main advantages to doing so. First, it allows us to further reduce computation time and memory footprint. Second, it generates a per-group-of-channel attention map which makes the model more flexible (as a unique attention matrix for all descriptor channels is a particular case of two attention matrix, one for each group of channel). The reason for not splitting the feature-descriptor pairs set into more subsets is because we want a trade-off between the advantages described above and the preservation of relevant features to compute attention.

Then, we consider a 3D U-Net [4] which is one of the most popular architectures for segmentation [6]. We refer to our 3D U-Net simply as U-Net. We incorporate the PAM into our U-Net as shown in Fig. 3 and demonstrate that the PAM can also improve architectures which have large receptive fields (we call this network U-PAM-Net). As shown in Fig. 3, we incorporate the PAM at the half-resolution level. Hence, we compute attention for (2×2×2) voxel regions which, in our experiments, led to similar results as computing attention at the voxel level while decreasing computation time and making convergence faster.

As the PAM introduces a small number of extra parameters, we compensate with additional channels in the first convolution on the architectures without the PAM so that the corresponding networks have either as many as or more degrees of freedom than networks with the PAM integrated.

We measure the performance of the different architectures with the Dice scores. Table 1 shows that the PAM improves performance for all the architectures it was incorporated into. In addition, we highlight that the shallow network Dil.FCN+PAM performs almost as well as the much deeper network 3D U-Net. Indeed, the dilated convolutions manage to describe the voxels using contextual information while the PAM uses those meaningful features to compute voxels interactions. Table 1 also illustrates the limitation of down-sampling layers pointed earlier as U-Net performs poorly on cervical vertebrae which appear very small in our images. U-PAM-Net manages to reach higher accuracy performances than [7], which makes use of a task-specific framework especially tuned to ”count” the vertebrae from spine segmentation. While  [7]

report an accuracy of 81%, our proposed framework obtained 89% using the same evaluation metric and on the same dataset. It should be noted that the training frameworks in terms of test-train split were different for both approaches. Figure

4 shows a representative example of the results we observed.

In this work, we propose the Permutohedral Attention Module, a computationally efficient attention module to be applied in 3D deep learning framework. The PAM can be incorporated in any CNN architecture. We demonstrated its ability to efficiently handle non-local information in the context of vertebrae segmentation and presented its potential to reduce networks size in specific tasks. Future work will notably include the investigation of asymmetric attention matrix for feature filtering and the integration of the PAM formulation in path training.