Permutation invariant Gaussian matrix models were recently developed for applications in computational linguistics. A 5-parameter family of models was solved. In this paper, we use a representation theoretic approach to solve the general 13-parameter Gaussian model, which can be viewed as a zero-dimensional quantum field theory. We express the two linear and eleven quadratic terms in the action in terms of representation theoretic parameters. These parameters are coefficients of simple quadratic expressions in terms of appropriate linear combinations of the matrix variables transforming in specific irreducible representations of the symmetric group S_D where D is the size of the matrices. They allow the identification of constraints which ensure a convergent Gaussian measure and well-defined expectation values for polynomial functions of the random matrix at all orders. A graph-theoretic interpretation is known to allow the enumeration of permutation invariants of matrices at linear, quadratic and higher orders. We express the expectation values of all the quadratic graph-basis invariants and a selection of cubic and quartic invariants in terms of the representation theoretic parameters of the model. 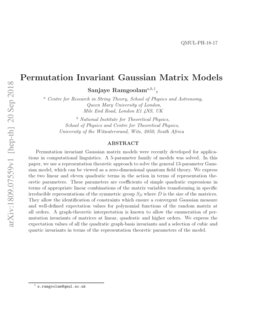 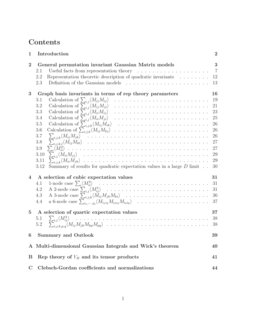 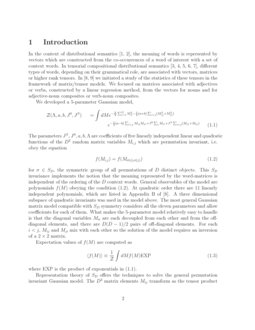 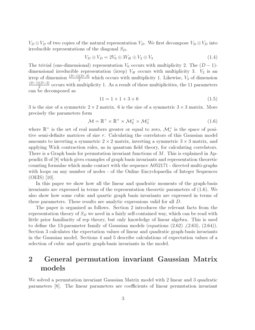 Model selection in the space of Gaussian models invariant by symmetry

The family of Weisfeiler-Leman equivalences on graphs is a widely studie...
Anuj Dawar, et al. ∙

Everybody's Got To Be Somewhere

The key to any nameless representation of syntax is how it indicates the...
Conor McBride, et al. ∙

The class of quasiseparable matrices is defined by a pair of bounds, cal...
Clement Pernet, et al. ∙

In the context of distributional semantics [1, 2]

, the meaning of words is represented by vectors which are constructed from the co-occurrences of a word of interest with a set of context words. In tensorial compositional distributional semantics

, different types of words, depending on their grammatical role, are associated with vectors, matrices or higher rank tensors. In

we initiated a study of the statistics of these tensors in the framework of matrix/tensor models. We focused on matrices associated with adjectives or verbs, constructed by a linear regression method, from the vectors for nouns and for adjective-noun composites or verb-noun composites.

We developed a 5-parameter Gaussian model,

The parameters JS,J0,a,b,Λ are coefficients of five linearly independent linear and quadratic functions of the D2 random matrix variables Mi,j which are permutation invariant, i.e. obey the equation

for σ∈SD, the symmetric group of all permutations of D distinct objects. This SD invariance implements the notion that the meaning represented by the word-matrices is independent of the ordering of the D context words. General observables of the model are polynomials f(M) obeying the condition (1.3). At quadratic order there are 11 linearly independent polynomials, which are listed in Appendix B of [8]. A three dimensional subspace of quadratic invariants was used in the model above. The most general Gaussian matrix model compatible with SD symmetry considers all the eleven parameters and allow coefficients for each of them. What makes the 5-parameter model relatively easy to handle is that the diagonal variables Mii are each decoupled from each other and from the off-diagonal elements, and there are D(D−1)/2 pairs of off-diagonal elements. For each i<j, Mij and Mji mix with each other so the solution of the model requires an inversion of a 2×2 matrix.

Expectation values of f(M) are computed as

where EXP is the product of exponentials in (1.2).

Representation theory of SD offers the techniques to solve the general permutation invariant Gaussian model. The D2 matrix elements Mij transform as the tensor product VD⊗VD of two copies of the natural representation VD. We first decompose VD⊗VD into irreducible representations of the diagonal SD.

where R+ is the set of real numbers greater or equal to zero, M+r is the space of positive semi-definite matrices of size r. Calculating the correlators of this Gaussian model amounts to inverting a symmetric 2×2 matrix, inverting a symmetric 3×3 matrix, and applying Wick contraction rules, as in quantum field theory, for calculating correlators. There is a Graph basis for permutation invariant functions of M. This is explained in Appendix B of [8] which gives examples of graph basis invariants and representation theoretic counting formulae which make contact with the sequence A052171 - directed multi-graphs with loops on any number of nodes - of the Online Encyclopaedia of Integer Sequences (OEIS) [10].

1.7). We also show how some cubic and quartic graph basis invariants are expressed in terms of these parameters. These results are analytic expressions valid for all D.

The paper is organised as follows. Section 2 introduces the relevant facts from the representation theory of SD we need in a fairly self-contained way, which can be read with little prior familiarity of rep theory, but only knowledge of linear algebra. This is used to define the 13-parameter family of Gaussian models (equations (2.115) ,(2.116), (2.118)). Section 3 calculates the expectation values of linear and quadratic graph-basis invariants in the Gaussian model. Sections 4 and 5 describe calculations of expectation values of a selection of cubic and quartic graph-basis invariants in the model.

We solved a permutation invariant Gaussian Matrix model with 2 linear and 3 quadratic parameters [8]. The linear parameters are coefficients of linear permutation invariant functions of M and the quadratic parameters (denoted Λ,a,b) are coefficients of quadratic functions. We explained the existence of a 2+11 parameter family of models, based on the fact that there are 11 linearly independent quadratic permutation invariant functions of a matrix. The general 2+11-parameter family of models can be solved by using techniques from the representation theory of SD. Useful background references on representation theory are [11, 12, 13]. We begin by collecting the relevant facts which will allow a useful parametrisation of the quadratic invariants of a matrix Mij. An important step is to form linear combinations of the Mij labelled by irreducible representations of SD. The results of this step are in (2.68)-(2.77). The quadratic terms in the action of the Gaussian model are close to diagonal in these S-variables.

The matrix elements Mij, where i,j run over {1,2,⋯,D} span a vector space of dimension D2. It is isomorphic to the tensor product VD⊗VD, where VD is a D-dimensional space. Consider VD as a span of D basis vectors {e1,e2,⋯,eD}. This is a representation of SD. For every permutation σ∈SD, there is a linear operator ρVD(σ) defined by

on the basis vectors and extended by linearity. With this definition, ρVD is a homomorphism from Sn to linear operators acting on VD.

We can take the basis vectors to be orthonormal.

We can form the following linear combinations

E0 is invariant under the action of SD

We have some matrices DHab(σ) such that

These matrices are obtained by using the action on the ei and the change of basis coefficients. The vectors EA for 0≤A≤D are orthonormal.

The last equation implies that

As we will see, this function F(i,j) will play an important role in calculations of correlators in the Gaussian model. It is the projector in VD for the subspace VH, obeying

Now we will use these coefficient CA,i to build linear combinations of the matrix elements Mi,j which have well-defined transformation properties under SD×SD. Define

The a,b indices range over 1⋯(D−1). These variables are irreducible under SD×SD, transforming as V0⊗V0,V0⊗VH,VH⊗V0,VH⊗VH. Under the diagonal SD, the first three transform as V0,VH,VH while SHHab form a reducible representation.

Conversely, we can write these M variables in terms of the S variables, using the orthogonality properties of the C0,i,Ca,i.

The next step is to consider quadratic products of these S-variables, and identify the products which are invariant. In order to do this we need to understand the transformation properties of the above S variables in terms of the diagonal action of SD. It is easy to see that S00 is invariant. S0Ha and SH0a both have a single a index running over {1,2,⋯,(D−1)}, and they transform in the same way as VH. The vector space spanned by SHHab form a space of dimension (D−1)2 which is

Permutations act on this as

With the above background of facts from representation theory at hand, we can give a useful description of quadratic invariants. Quadratic invariant functions of Mij form the invariant subspace of Sym2(VD⊗VD) since Mij transform as VD⊗VD.