The scenario of an uplink two-user non-orthogonal multiple access (NOMA) communication system is analytically studied when it operates in the short packet transmission regime. The considered users support mobility and each is equipped with a single antenna, while they directly communicate with a multi-antenna base station. Power-domain NOMA is adopted for the signal transmission as well as the successive interference cancellation approach is performed at the receiver for decoding. The packet error rate (PER) is obtained in simple closed formulae under independent Rayleigh faded channels and for arbitrary user mobility profiles. The practical time variation and correlation of the channels is also considered. Moreover, useful engineering insights are manifested in short transmission time intervals, which define a suitable setup for the forthcoming ultra-reliable and low latency communication systems. Finally, it turns out that the optimal NOMA power allocation can be computed in a straightforward cost-effective basis, capitalizing on the derived PER expressions. 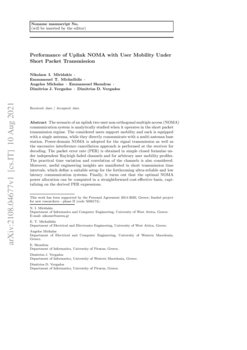 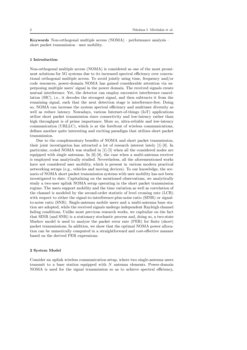 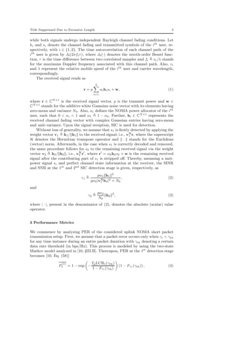 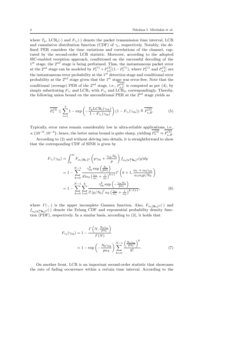 Performance Analysis of NOMA for Ultra-Reliable and Low-Latency Communications

Non-orthogonal multiple access (NOMA) is considered as one of the most prominent solutions for 5G systems due to its increased spectral efficiency over conventional orthogonal multiple access. To avoid jointly using time, frequency and/or code resources, power-domain NOMA has gained considerable attention via superposing multiple users’ signal in the power domain. The received signals create mutual interference. Yet, the detector can employ successive interference cancellation (SIC), i.e., it decodes the strongest signal, and then subtracts it from the remaining signal, such that the next detection stage is interference-free. Doing so, NOMA can increase the system spectral efficiency and multiuser diversity as well as reduce latency. Nowadays, various Internet-of-things (IoT) applications utilize short packet transmission since connectivity and low-latency rather than high throughput is of prime importance. More so, ultra-reliable and low-latency communication (URLLC), which is at the forefront of wireless communications, defines another quite interesting and exciting paradigm that utilizes short packet transmission.

Due to the complementary benefits of NOMA and short packet transmission, their joint investigation has attracted a lot of research interest lately Amjad18 -HuangYang19 . In particular, coded NOMA was studied in Amjad18 -Ghanami21 when all the considered nodes are equipped with single antennas. In Tran21 -HuangYang19

, the case when a multi-antenna receiver is employed was analytically studied. Nevertheless, all the aforementioned works have not considered user mobility, which is present in various modern practical networking setups (e.g., vehicles and moving devices). To our knowledge, the scenario of NOMA short packet transmission systems with user mobility has not been investigated to date. Capitalizing on the mentioned observations, we analytically study a two-user uplink NOMA setup operating in the short packet transmission regime. The users support mobility and the time variation as well as correlation of the channel is modeled by the second-order statistic of level crossing rate (LCR) with respect to either the signal-to-interference-plus-noise ratio (SINR) or signal-to-noise ratio (SNR). Single-antenna mobile users and a multi-antenna base station are adopted, while the received signals undergo independent Rayleigh channel fading conditions. Unlike most previous research works, we capitalize on the fact that SINR (and SNR) is a stationary stochastic process and, doing so, a two-state Markov model is used to analyze the packet error rate (PER) for finite (short) packet transmissions. In addition, we show that the optimal NOMA power allocation can be numerically computed in a straightforward and cost-effective manner based on the derived PER expressions.

Consider an uplink wireless communication setup, where two single-antenna users transmit to a base station equipped with N antenna elements. Power-domain NOMA is used for the signal transmission so as to achieve spectral efficiency, while both signals undergo independent Rayleigh channel fading conditions. Let hi and si denote the channel fading and transmitted symbols of the ith user, respectively, with i∈{1,2}. The time autocorrelation of each channel path of the ith user is given by J0(2πfiτ), where J0(⋅) denotes the zeroth-order Bessel function, τ is the time difference between two correlated samples and fi≜vi/λ stands for the maximum Doppler frequency associated with this channel path. Also, vi and λ represent the relative mobile speed of the ith user and carrier wavelength, correspondingly.

The received signal reads as

is the received signal vector,

p is the transmit power and w∈CN×1

N0. Also, αi defines the NOMA power allocator of the ith user, such that 0<αi<1 and α1≜1−α2. Further, hi∈CN×1 represents the received channel fading vector with complex Gaussian entries having zero-mean and unit-variance. Upon the signal reception, SIC is used for detection.

Without loss of generality, we assume that s1 is firstly detected by applying the weight vector v1≜h1/∥h1∥ to the received signal; i.e., vH1r, where the superscript H denotes the Hermitian transpose operator and ∥⋅∥ stands for the Euclidean (vector) norm. Afterwards, in the case when s1 is correctly decoded and removed, the same procedure follows for s2 to the remaining received signal via the weight vector v2≜h2/∥h2∥, i.e., vH2r′, where r′=α2h2s2+w is the remaining received signal after the contributing part of s1 is stripped off. Thereby, assuming a unit-power signal si and perfect channel state information at the receiver, the SINR and SNR at the 1st and 2nd SIC detection stage is given, respectively, as

where |⋅|, present in the denominator of (2), denotes the absolute (scalar) value operator.

We commence by analyzing PER of the considered uplink NOMA short packet transmission setup. First, we assume that a packet error occurs only when γi<γth for any time instance during an entire packet duration with γth denoting a certain data rate threshold (in bps/Hz). This process is modeled by using the two-state Markov model analyzed in (Fukawa12, , §III.B). Thereupon, PER at the 1st detection stage becomes (Fukawa12, , Eq. (58))

γi, respectively. Notably, the defined PER considers the time variations and correlations of the channel, captured by the second-order LCR statistic. Moreover, according to the adopted SIC-enabled reception approach, conditioned on the successful decoding of the 1st stage, the 2nd stage is being performed. Thus, the instantaneous packet error at the 2nd stage can be modeled by P(1)s+P(2)s,C(1−P(1)s), where P(1)s and P(2)s,C

are the instantaneous error probability at the

1st detection stage and conditional error probability at the 2nd stage given that the 1st stage was error-free. Note that the conditional (average) PER of the 2nd stage, i.e., ¯¯¯¯¯¯¯¯¯¯P(2)s,C is computed as per (4), by simply substituting Fγ1 and LCR1 with Fγ2 and LCR2, correspondingly. Thereby, the following union bound on the unconditional PER at the 2nd stage yields as

According to (2) and without delving into details, it is straightforward to show that the corresponding CDF of SINR is given by

denote the Erlang CDF and exponential probability density function (PDF), respectively. In a similar basis, according to (

On another front, LCR is an important second-order statistic that showcases the rate of fading occurrence within a certain time interval. According to the structure of γ1 in (2), its corresponding LCR is expressed as (AliTorlak17, , Eq. (21))

In the short packet transmission regime, recall that Tp remains quite low. In addition, when ultra-high reliability is required in the considered NOMA setup, it is obvious that a high SNR is a requisite. Capitalizing on the said observations and applying the first-order McLaurin series to the exponential function within (4) (i.e., exp(−z)→1−z as z→0+), we arrive at

Likewise, PER at the 2nd stage approaches

The optimal power allocation, defined by α⋆, defines a key performance indicator for the considered NOMA setup. Specifically, the optimization problem can be designed such that PER at the 2nd stage should be minimized under the constraint of PER at the 1st stage not exceeding a predetermined threshold value ϵ. It can be formulated as

Unfortunately, P1 is a non-convex optimization problem since both the objective and constraint function (regarding PER) are non-convex functions. However, α⋆ can be directly obtained by a numerical search over the real line in the range {0,1} for arbitrary antenna arrays N and user mobility profiles.

The derived analytical results are verified via numerical validation where they are cross-compared with corresponding Monte-Carlo simulations. The Rayleigh faded channels are generated by using the sum-of-sinusoids method Patzold09 , which is a modified Jakes model. In what follows, for ease of presentation and without loss of generality, we assume that f1=f2≜f; namely, the two users have an identical mobility profile (i.e., the same relative speed). The packet duration Tp is set to be 1 millisecond, appropriate for low-latency short packet transmission.

In Fig. 1, the maximum Doppler frequency is set to be f=162 Hz, which corresponds to a vehicular speed of 50 km/hr regarding a cellular system with carrier frequency 3.5 GHz. We model a base station equipped with 2 antenna elements operating in a high SNR region. The PER of the 1st detection stage is depicted as well as the conditional PER at the 2nd stage (given that the 1st stage is correctly decoded), which can be directly computed by setting i=2 in (5). The performance gap between the two stages is evident and gets even more emphatic for an increasing transmit SNR p/N0. Further, it can be seen that PER of the 1st stage dominates the overall system performance for relatively low α1 values in comparison to PER at the 2nd stage; and vice versa for relatively high α1 values. This is a reasonable outcome since lower α1 values typically reduce γ1 in (2) as well as increase γ2 in (3), while quite the opposite result holds as α1 increases.

In Fig. 2, the role of multiple antennas at the receiver is highlighted, by considering a conventional base station with N=8 antennas compared to a massive antenna array of N=128 antennas. The union bound of PER at the 2nd stage is illustrated. It is noteworthy that the massive antenna scenario outperforms the conventional case only when the power allocation factor α1 is carefully selected. Obviously, the PER performance is not affected by an increase of N for a relatively low α1. On the other hand, there is a certain range of α1 values, where the presence of a vast antenna array is greatly beneficial. The optimal α1 (namely, α⋆) is lying in this range, which can be quite easily computed as per P1. Also, as expected, PER is dramatically reduced for a lower rate threshold, γth. Notice that a relatively low data rate requirement is the typical case of various URLLC applications since high data rates are being sacrificed so as to guarantee connectivity and ultra-high reliability.

An uplink two-user NOMA communication system was considered, which operates under independent Rayleigh faded channels. The case when the users and receiver are equipped with a single-antenna and multi-antenna elements, respectively, was studied. Moreover, user mobility was supported reflecting several practical applications, e.g., vehicle-to-vehicle and device-to-device networking setups. Particularly, we focused on the short packet transmission regime, which relates to the rather timely URLLC applications. Closed-form expressions regarding the system PER were derived under arbitrary user mobility profiles and various antenna array ranges. Finally, some new useful engineering insights were obtained, while the optimal NOMA power allocation per user was formulated based on the derived PER results.