Currently, path planning algorithms are used in many daily tasks. They are relevant to find the best route in traffic and make autonomous robots able to navigate. The use of path planning presents some issues in large and dynamic environments. Large environments make these algorithms spend much time finding the shortest path. On the other hand, dynamic environments request a new execution of the algorithm each time a change occurs in the environment, and it increases the execution time. The dimensionality reduction appears as a solution to this problem, which in this context means removing useless paths present in those environments. Most of the algorithms that reduce dimensionality are limited to the linear correlation of the input data. Recently, a Convolutional Neural Network (CNN) Encoder was used to overcome this situation since it can use both linear and non-linear information to data reduction. This paper analyzes in-depth the performance to eliminate the useless paths using this CNN Encoder model. To measure the mentioned model efficiency, we combined it with different path planning algorithms. Next, the final algorithms (combined and not combined) are checked in a database that is composed of five scenarios. Each scenario contains fixed and dynamic obstacles. Their proposed model, the CNN Encoder, associated to other existent path planning algorithms in the literature, was able to obtain a time decrease to find the shortest path in comparison to all path planning algorithms analyzed. the average decreased time was 54.43 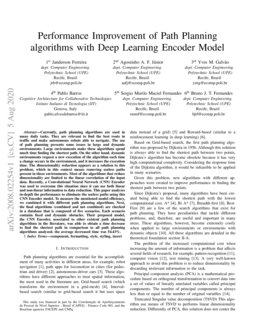 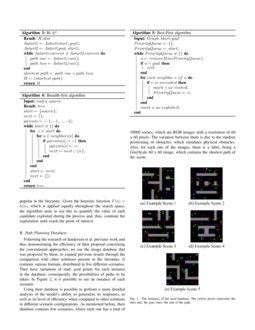 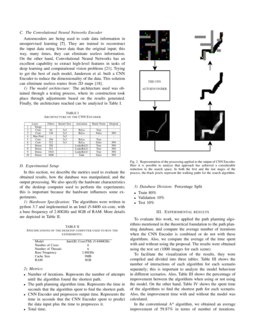 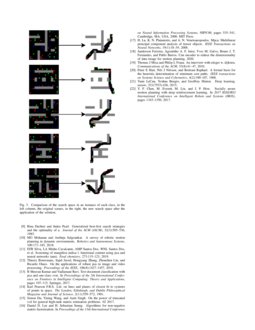 Path planning algorithms are essential for the accomplishment of many activities in different areas, for example, robot navigation [10], path apps for locomotion in cities (for pedestrian and driver) [19], autonomous-driver cars [22]. These algorithms have different approaches to treat spatial information, the most used in the literature are, Grid-based search (which transforms the environment in a grid-mesh) [21], Interval-based search (similar to grid-based search it but uses space data instead of a grid) [7]

and Reward-based (similar to a reinforcement learning in deep learning)

Based on Grid-based search, the first path planning algorithm was proposed by Dijkstra in 1956. Although this solution is always able to find the shortest path between two points, Dijkstra’s algorithm has become obsolete because it has very high computational complexity. Considering the response time of the Dijkstra algorithm, it would be infeasible to be applied in many scenarios.

Given this problem, new algorithms with different approaches were created to improve performance in finding the shortest path between two points.

Since Dijkstra’s proposal, many algorithms have been created being able to find the shortest path with the lowest computational cost. A* [21], Bi A* [13], Breadth-first [12], Best-First [3] are a few of the search algorithms that exist for path planning. They have peculiarities that tackle different problems, and, therefore, are useful and important in many areas. These algorithms, however, become extremely costly when applied to large environments or environments with dynamic objects [18]. All these algorithms are detailed in the theoretical foundation section II-A.

The problem of the increased computational cost when increasing the amount of information is a problem that affects several fields of research, for example, pattern recognition

[1], text mining [11]. A very well-known approach to avoid this problem is to reduce dimensionality by discarding irrelevant information to the task.

, the authors built a deep learning model able to reduce dimensionality using non-linearity correlation, named Convolutional Neuronal Network (CNN) Encoder. Their method removes mostly the useless information of the input data, including in dynamic environments. Eliminate useless information for path planning problem means to remove the paths which do not connect the start point and the goal point.

In this work, we perform an in-depth evaluation of the application of their proposed CNN Encoder to decrease the time spent by different path planning algorithms, showing the efficiency of the proposal to improve various path planning solutions.

The Dijkstra’s algorithm proposed in 1956 by Edsger W. Dijkstra [17] is a path planning algorithm based on graph search. It solves the single-source shortest path problem for a graph with non-negative edge path costs, producing a shortest-path tree, it can be defined as follows:

was proposed to solve the limitations of Dijkstra’s algorithm, and to overcome it in the time spent to find the shortest path. This solution uses heuristics to be faster. It is defined as:

Bidirectional A* search is a graph search algorithm that finds the shortest path from an initial vertex to a goal vertex in a directed graph running two simultaneous searches [13]. It can be described as:

The Breadth-first Search [12] is a classic graph search algorithm, and it works by expanding and systematically exploring a given node and progressively redoing the same procedure for all its neighbors. At each iteration, the last one explored, but not expanded, or visited, is selected. Also, this algorithm discovers all nodes that are a certain distance from the start.

Based on the different strategies for solving search problems, the Best-First [3] algorithm is one of the most popular in the literature. Given the heuristic function F(n)=h(n), which is applied equally throughout the search space, the algorithm aims to use this to quantify the value of each candidate exploited during the process and, thus, continue the exploration until reach the point of interest.

Following the research of Janderson et al. previous work and thus demonstrating the efficiency of their proposal concerning the conventional approaches, we use the image database that was proposed by them, to expand previous results through the comparison with other solutions present in the literature. It contains various formats, distributed in five different scenarios. They have variations of start, goal points for each instance in the database; consequently, the possibilities of paths to be taken. In Figure 2, it is possible to see an instance of each scenario.

Using their database is possible to perform a more detailed analysis of the model’s ability to generalize its responses, as well as its level of efficiency when compared to other solutions in different scenario configurations. As mentioned before, their database contains five scenarios, where each one has a total of 10000 scenes, which are RGB images with a resolution of 60 x 60 pixels. The variation between them is due to the random positioning of obstacles; which simulates physical obstacles. Also, for each one of the images, there is a label, being a GrayScale 60 x 60 image, which contains the shortest path of the scene.

Autoencoders are being used to code data information in unsupervised learning [firstae]. They are trained to reconstruct the input data using fewer data than the original input; this way, many times, they can eliminate useless information. On the other hand, Convolutional Neural Networks has an excellent capability to extract high-level features in tasks of deep learning and computational vision problems[14]. Trying to get the best of each model, Janderson et al. built a CNN Encoder to reduce the dimensionality of the data. This solution can eliminate useless routes from 2D maps [6].

The architecture used was obtained through a testing process, where its construction took place through adjustments based on the results generated. Finally, the architecture reached can be analyzed in Table I.

In this section, we describe the metrics used to evaluate the obtained results, how the database was manipulated, and the output processing. We also specify the hardware characteristics of the desktop computer used to perform the experiments; this is important because the hardware influences some experiments.

The algorithms were written in python 3.7 and implemented in an Intel i5-8400 six-core, with a base frequency of 2.80GHz and 8GB of RAM. More details are depicted in Table II.

To evaluate this work, we applied the path planning algorithms mentioned in the theoretical foundation to the path planning database, and compare the average number of iterations when the CNN Encoder is combined or do not with these algorithms. Also, we compare the average of the time spent with and without using the proposal. The results were obtained using the test set (1000 images for each scene).

To facilitate the visualization of the results, they were compiled and divided into three tables. Table III shows the number of interactions of each algorithm for each scenario separately; this is important to analyze the model behaviour in different scenarios. Also, Table III shows the percentage of improvement between the algorithms when using or not using the model. On the other hand, Table IV shows the spent time of the algorithms to find the shortest path for each scenario. Also, the improvement time with and without the model was calculated.

This work aimed to show that it is possible to improve the performance of path planning algorithms using a CNN Encoder to eliminate useless routes.

From the results obtained, we can assume that it is more advantageous to apply the CNN encoder to the existing path planning techniques. That is, the proposal was able to reduce the time to find the shortest path with all analyzed algorithms. In fact that CNN Encoder can eliminate routes in scenarios with fixed and dynamic obstacles, which may help in research with robotic navigation. As such, our contribution is to validate the architecture’s efficiency with different solutions from the path planning literature.

As future work, we hope to check the proposed model for the creation of a socially aware motion planning algorithm [2]. Also, we intend to combine new Deep Learning features with improving the architecture, which may reduce the response time even further.