In this paper, we analyse the performance of physical layer security over Fluctuating Beckmann (FB) fading channel which is an extended model of both the κ-μ shadowed and the classical Beckmann distributions. Specifically, the average secrecy capacity (ASC), secure outage probability (SOP), the lower bound of SOP (SOP^L), and the probability of strictly positive secrecy capacity (SPSC) are derived in exact closed-form expressions using two different values of the fading parameters, namely, m and μ which represent the multipath and shadowing severity impacts, respectively. Firstly, when the fading parameters are arbitrary values, the performance metrics are derived in exact closed-form in terms of the extended generalised bivariate Fox's H-function (EGBFHF) that has been widely implemented in the open literature. In the second case, to obtain simple mathematically tractable expressions in terms of analytic functions as well as to gain more insight on the behaviour of the physical layer security over Fluctuating Beckmann fading channel models, m and μ are assumed to be integer and even numbers, respectively. The numerical results of this analysis are verified via Monte Carlo simulations. 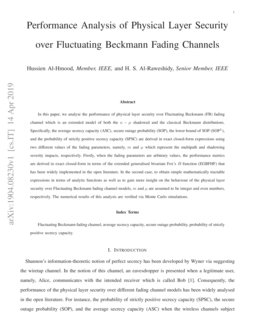 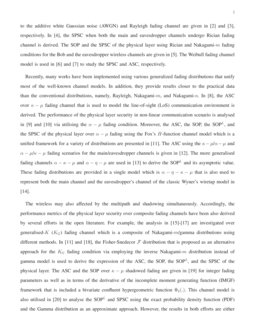 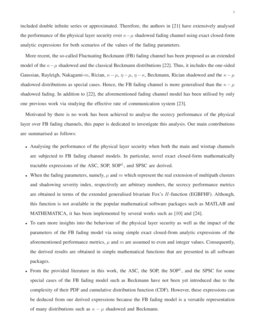 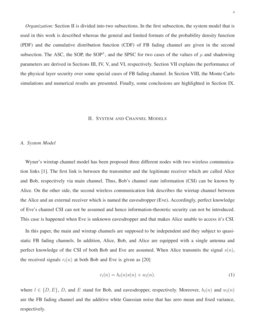 Shannon’s information-theoretic notion of perfect secrecy has been developed by Wyner via suggesting the wiretap channel. In the notion of this channel, an eavesdropper is presented when a legitimate user, namely, Alice, communicates with the intended receiver which is called Bob [1]. Consequently, the performance of the physical layer security over different fading channel models has been widely analysed in the open literature. For instance, the probability of strictly positive secrecy capacity (SPSC), the secure outage probability (SOP), and the average secrecy capacity (ASC) when the wireless channels subject to the additive white Gaussian noise (AWGN) and Rayleigh fading channel are given in [2] and [3], respectively. In [4], the SPSC when both the main and eavesdropper channels undergo Rician fading channel is derived. The SOP and the SPSC of the physical layer using Rician and Nakagami-m fading conditions for the Bob and the eavesdropper wireless channels are given in [5]. The Weibull fading channel model is used in [6] and [7] to study the SPSC and ASC, respectively.

Recently, many works have been implemented using various generalized fading distributions that unify most of the well-known channel models. In addition, they provide results closer to the practical data than the conventional distributions, namely, Rayleigh, Nakagami-m, and Nakagami-n. In [8], the ASC over κ−μ fading channel that is used to model the line-of-sight (LoS) communication environment is derived. The performance of the physical layer security in non-linear communication scenario is analysed in [9] and [10] via utilising the α−μ fading condition. Moreover, the ASC, the SOP, the SOPL, and the SPSC of the physical layer over α−μ fading using the Fox’s H-function channel model which is a unified framework for a variety of distributions are presented in [11]. The ASC using the κ−μ/α−μ and α−μ/κ−μ fading scenarios for the main/eavesdropper channels is given in [12]. The more generalised fading channels α−κ−μ and α−η−μ are used in [13] to derive the SOPL and its asymptotic value. These fading distributions are provided in a single model which is α−η−κ−μ that is also used to represent both the main channel and the eavesdropper’s channel of the classic Wyner’s wiretap model in [14].

The wireless may also affected by the multipath and shadowing simultaneously. Accordingly, the performance metrics of the physical layer security over composite fading channels have been also derived by several efforts in the open literature. For example, the analysis in [15]-[17] are investigated over generalised-K (KG) fading channel which is a composite of Nakagami-m

/gamma distributions using different methods. In [11] and [18], the Fisher-Snedecor

F distribution that is proposed as an alternative approach for the KG fading condition via employing the inverse Nakagami-m distribution instead of gamma model is used to derive the expression of the ASC, the SOP, the SOPL, and the SPSC of the physical layer. The ASC and the SOP over κ−μ

Φ2(.). This channel model is also utilised in [20] to analyse the SOPL

and SPSC using the exact probability density function (PDF) and the Gamma distribution as an approximate approach. However, the results in both efforts are either included double infinite series or approximated. Therefore, the authors in [21] have extensively analysed the performance of the physical layer security over

κ−μ shadowed fading channel using exact closed-form analytic expressions for both scenarios of the values of the fading parameters.

Motivated by there is no work has been achieved to analyse the secrecy performance of the physical layer over FB fading channels, this paper is dedicated to investigate this analysis. Our main contributions are summarised as follows:

Organization: Section II is divided into two subsections. In the first subsection, the system model that is used in this work is described whereas the general and limited formats of the probability density function (PDF) and the cumulative distribution function (CDF) of FB fading channel are given in the second subsection. The ASC, the SOP, the SOPL, and the SPSC for two cases of the values of μ and shadowing parameters are derived in Sections III, IV, V, and VI, respectively. Section VII explains the performance of the physical layer security over some special cases of FB fading channel. In Section VIII, the Monte Carlo simulations and numerical results are presented. Finally, some conclusions are highlighted in Section IX.

Wyner’s wiretap channel model has been proposed three different nodes with two wireless communication links [1]. The first link is between the transmitter and the legitimate receiver which are called Alice and Bob, respectively via main channel. Thus, Bob’s channel state information (CSI) can be known by Alice. On the other side, the second wireless communication link describes the wiretap channel between the Alice and an external receiver which is named the eavesdropper (Eve). Accordingly, perfect knowledge of Eve’s channel CSI can not be assumed and hence information-theoretic security can not be introduced. This case is happened when Eve is unknown eavesdropper and that makes Alice unable to access it’s CSI.

In this paper, the main and wiretap channels are supposed to be independent and they subject to quasi-static FB fading channels. In addition, Alice, Bob, and Alice are equipped with a single antenna and perfect knowledge of the CSI of both Bob and Eve are assumed. When Alice transmits the signal s(n), the received signals rl(n) at both Bob and Eve is given as [20]

where l∈{D,E}, D, and E stand for Bob, and eavesdropper, respectively. Moreover, hl(n) and wl(n)

are the FB fading channel and the additive white Gaussian noise that has zero mean and fixed variance, respectively.

Case_1: The PDF of the instantaneous SNR γl, fγl(γl), for the destination (Bob), D, and the eavesdropper, E, channels using FB fading channel model is given by [22, eq. (5)]

The normalised ASC that is defined as the difference between the capacity of the main and wiretap channels over instantaneous SNR, γ, can be calculated by ¯Cs=I1+I2−I3 [15, eq. (6)] where I1, I2, and I3 are respectively expressed as

For Case 2, I1, I2, and I3 are respectively derived in simple analytic exact closed-form expressions as shown in (13), (14), and (15), at the top this page. Substituting these expressions in ¯Cs=I1+I2−I3 and performing some straightforward manipulations, novel result is obtained as given in (16) at the top of this page.

The SOP is defined as the probability of falling the instantaneous secrecy capacity, Cs, of the system below the target secrecy threshold, Rs, i.e., P(Cs<Rs) where P(.) stands for the probability symbol. Mathematically, the SOP can be evaluated by [20, eq. (20)]

where θ=exp(Rs)≥1 with Rs≥0 denotes the target secrecy threshold.