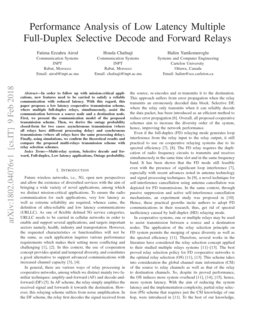 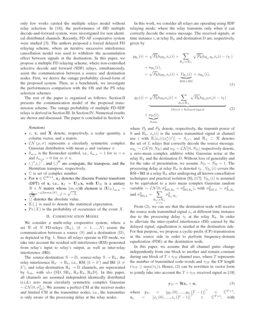 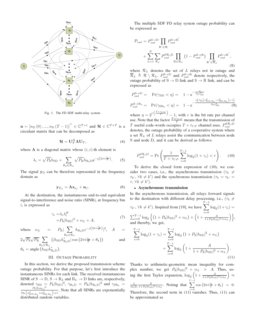 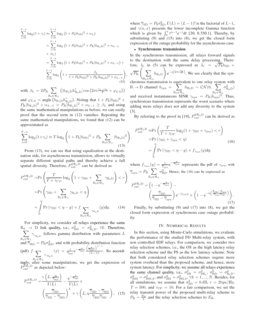 Future wireless networks, i.e., 5G, open new perspectives and allow the existence of diversified services with the aim of bringing a wide variety of novel applications, among which we distinct mission-critical applications. To ensure the radio communication for such applications, very low latency as well as extreme reliability are required, whence came, the definition of ultra-reliable and low latency communications (URLLC). As one of flexible defined 5G service categories, URLLC needs to be carried in cellular networks in order to enable and support several applications, and targets important sectors namely, health, industry and transportation. However, the requested characteristics or functionalities will not be the same, as each application inquires various performance requirements which makes their setting more conflicting and challenging [1, 2]. In this context, the use of cooperation concept provides spatial and temporal diversity, and constitutes a good alternative to support advanced communications with increased channel capacity [3, 4].

In general, there are various ways of relay processing in cooperative networks, among which we distinct mainly two familiar techniques: amplify-and-forward (AF) and decode-and-forward (DF) [5]. In AF scheme, the relay simply amplifies the received signal and forwards it towards the destination. However, this relaying scheme suffers from noise amplification. In the DF scheme, the relay first decodes the signal received from the source, re-encodes and re-transmits it to the destination. This approach suffers from error propagation when the relay transmits an erroneously decoded data block. Selective DF, where the relay only transmits when it can reliably decode the data packet, has been introduced as an efficient method to reduce error propagation [6]. Overall, all proposed cooperative schemes aim to increase the diversity order of the system, hence, improving the network performance.

Even if the full-duplex (FD) relaying mode generates loop interference from the relay input to the relay output, it still practical to use on cooperative relaying systems due to its spectral efficiency [7, 8]. The FD relay requires the duplication of radio frequency circuits to transmits and receives simultaneously in the same time slot and in the same frequency band. It has been shown that the FD mode still feasible even with the presence of significant loop interference [7], especially with recent advances noted in antenna technology and signal processing techniques. In [9], a novel technique for self-interference cancellation using antenna cancellation was depicted for FD transmissions. In the same context, through passive suppression and active self-interference cancellation mechanisms, an experiment study was proposed in [10]. Hence, these practical growths incite authors to adopt FD communications in their research, thus, get rid of spectral inefficiency caused by half-duplex (HD) relaying mode.

In cooperative systems, one or multiple relays may be used to assist transmission between a source and a destination nodes. The application of the relay selection principle on FD system permits the merging of space diversity as well as the spectral efficiency [11]. Therefore, several works in the literature have considered the relay selection concept applied to their studied multiple relays systems [11, 12, 13]. The best proved relay selection policy for FD cooperative networks is the optimal relay selection (OS) [11, 13]. This scheme takes into consideration the global channel state information (CSI) of the source to relay channels as well as that of the relay to destination channels. So, despite its proved performance, the OS induces more system overhead [11, 14, 15], hence, more system latency. With the aim of reducing the system latency and the implementation complexity, partial relay selection (PS) scheme that requires just the CSI knowledge of one hop, were introduced in [11]. To the best of our knowledge, only few works carried the multiple relays model without relay selection. In [16], the performance of HD multiple decode-and-forward system, were investigated for non identical distributed channels. Recently, FD-AF cooperative system were studied [3]. The authors proposed a forced delayed FD relaying scheme, where an iterative successive interference cancellation model was used to withdraw the accumulation effect between signals at the destination. In this paper, we propose a multiple FD relaying scheme, where non-controlled selective decode and forward (SDF) relays, simultaneously, assist the communication between a source and destination nodes. First, we derive the outage probability closed-form of the proposed system. Then, as a benchmark, we investigate the performances comparison with the OS and the PS relay selection schemes.

The rest of the paper is organized as follows: SectionII presents the communication model of the proposed transmission scheme. The outage probability of multiple FD-SDF relays is derived in SectionIII. In SectionIV, Numerical results are shown and discussed. The paper is concluded in SectionV.

We consider a multi-relay cooperative system, where a set R of N FD-relays (Rk), (k=1,...,N) assists the communication between a source (S) and a destination (D), as depicted in Fig. 1. Since all relays operate in FD mode, we take into account the residual self-interference (RSI) generated from relay’s input to relay’s output, as well as inter-relay interference (IRI).

The source-destination S→D, source-relay S→Rk, the relay interference Rk′→Rk, i.e., RSI (k=k′) and IRI (k≠k′), and relay-destination Rk→D channels, are represented by hab, with abϵ{SD,SRk,Rk′Rk,RkD}. In this paper, all channels are assumed independent identically distributed (i.i.d.) zero mean circularly symmetric complex Gaussian ∼CN(0,σ2ab). We assume a perfect CSI at the receiver nodes and limited CSI at the transmitter nodes, i.e., the transmitter is only aware of the processing delay at the relay nodes.

In this work, we consider all relays are operating using SDF relaying mode, where the relay transmits only when it can correctly decode the source message. The received signals, at time instance i, at relay Rk and destination D are, respectively, given by

where PS and PR denote, respectively, the transmit power of S and Rk, xs(i) is the source transmitted signal at channel use i with E[xs(i)x⋆s(i′)]=δi,i′, and RL⊂R denotes the set of L relays that correctly decode the source message. nRk∼CN(0,NR) and nD∼CN(0,ND) respectively denote, a zero-mean complex additive white Gaussian noise at the relay Rk and the destination D. Without loss of generality and for the sake of presentation, we assume ND=NR=1. The processing delay at relay Rk is denoted τk , VRk(i) covers the RSI+IRI at a relay Rk after undergoing all known cancellation techniques and practical isolation [8, 17]. VRk(i)

In this paper, we assume that all channel gains change independently from one block to another and remain constant during one block of T+τCP channel uses, where T represents the number of transmitted code-words and τCP the CP length (). Hence, (2) can be rewritten in vector form to jointly take into account the T+τCP received signal as [18]

where Λ is a diagonal matrix whose (i,i)-th element is

At the destination, the instantaneous end-to-end equivalent signal-to-interference and noise ratio (SINR), at frequency bin i, is expressed as

In this section, we derive the proposed transmission scheme outage probability. For that purpose, let’s first introduce the instantaneous SINRs for each link. The received instantaneous SINR of S→D, S→Rk and Rk→D links are, respectively, denoted γSD=PS|hSD|2, γRkD=PR|hRkD|2 and γSRk=PS|hSRk|2PR(σ2RSI,Rk+σ2IRI,Rk)+1

. Note that all SINRs are exponentially distributed random variables.

where RL denotes the set of L relays not in outage and ¯¯¯¯¯RL≜R∖RL. PS→Dout and PS→Rout denote respectively, the outage probability of S→D link and S→R link, and can be expressed as

where η=2r(T+τCPT)−1, with r is the bit rate per channel use. Note that the factor T+τCPT means that the transmission of T useful code-words occupies T+τCP channel uses. PSRLDout denotes, the outage probability of a cooperative system where a set RL of L relays assist the communication between node S and node D, and it can be derived as follows:

Thanks to arithmetic-geometric mean inequality for complex number, we get

From (13), we can see that using equalization at the destination side, for asynchronous transmission, allows to virtually separate different spatial paths and thereby achieve a full spatial diversity. Therefore, PSRLDout can be derived as

, and with probability distribution function (pdf)

f∑Rk∈RLγγRkD(x)=1¯¯¯γRDe−x¯γRD(x¯γRD)L−1(L−1)!. So accordingly, after some manipulations, we get the expression of PSRLDout as depicted below:

By referring to the proof in [19], PSRLDout can be derived as

Finally, by substituting (9) and (17) into (8), we get the closed form expression of synchronous case outage probability.

Fig. 3 and Fig. 3 illustrate the performances of the investigated system model in sectionII. They represent, respectively, asynchronous and synchronous cases, where the outage probability of the three relaying schemes, cited above, are plotted versus σ2IRI. Moreover, to point out the impact of the number of relays on the system performances, the evaluation is performed for two different number of relays, i.e., N=5 and N=10, for a fixed value of RSI, i.e., σ2RSI=0dB. First, we notice that the simulation results match perfectly with the theoretical analysis, obtained in sectionIII, for both synchronous and asynchronous cases. From Fig. 3, that represents the best scenario where all relays are asynchronous, we can see clearly that the system performances become better as N increases, mainly due to the additional spatial diversity. Furthermore, depending on the inter-relay-interference level at the relays, i.e., σ2IRI, the three considered relaying schemes outperform each other. In term of outage probability, when the system suffers from high IRI, OS scheme offers the best performance gain but at the price of high system overhead. For low IRI, i.e.,σ2IRI<σ2RSI, the proposed multi-relay scheme becomes the best choice in term of both outage probability and latency. Note that, due to the distance between the transmit and receive antennas that reduces naturally the IRI, we should consider σ2IRI<σ2RSI for practical scenarios. Now, we turn to the worst scenario where all relays are synchronous. From Fig. 3, we notice that the curves of synchronous case have a very bad slope and saturate at low σ2IRI. In fact, in the synchronous case adding more relays does not add any spatial diversity to the system. Even for a such bad scenario, we can see, from Fig. 3, that for N=5, the multi-relay transmission scheme outperforms the moderate latency relay selection PS at low σ2IRI.

Now, we focus on the asynchronous scenario and evaluate the outage probability of the studied system versus σ2SR. In Fig. 4, we consider the scenario of a strong Rk→D link, i.e., σ2RD=10dB, and we can see clearly that the proposed multi-relay system and the OS scheme offer the same performances, while outperforming the PS scheme with the increase of σ2SR. In Fig. 5, as the Rk→D link quality decreases, i.e., σ2RD=0dB, we start to notice that the OS scheme, provides better performances than the multi-relay system when σ2SR≥4dB. This is due to the fact that, in OS scheme, the relaying transmit power ER is fully used by the best Rk→D link while, in multi-relay scheme, the relaying transmit power ER is shared equally between L relay links, i.e., PR=ERL. Even though, the proposed scheme still performs better than the PS scheme.

In this paper, we proposed a low latency cooperative transmission scheme, where multiple FD-SDF relays, simultaneously, assist the communication between a source node and a destination node. First, the analytical expression of the outage probability were derived for two cases, i.e., asynchronous and synchronous transmissions. Then, using Monte-carlo simulations, we compared the proposed multi-relays transmission scheme with two different relay selection schemes, i.e., the OS scheme requiring the knowledge of global CSI and the PS scheme requiring the knowledge of partial CSI. Simulation results reveal that the proposed multi-relay transmission scheme and relay selection schemes outperform each other in term of outage probability, depending on IRI, number of relays, and channel links quality. As the proposed multiple FD cooperative relaying scheme does not require any central component, thus, getting rid of relay selection signaling messages and thereby, reducing the system latency while increasing the system diversity, we can say that it can be considered as a good candidate for very low latency applications.