As an extension of self-exciting Hawkes process, the multivariate Hawkes process models counting processes of different types of random events with mutual excitement. In this paper, we present a perfect sampling algorithm that can generate i.i.d. stationary sample paths of multivariate Hawkes process without any transient bias. In addition, we provide an explicit expression of algorithm complexity in model and algorithm parameters and provide numerical schemes to find the optimal parameter set that minimizes the complexity of the perfect sampling algorithm. 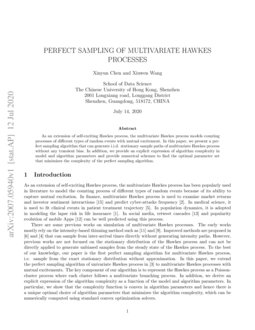 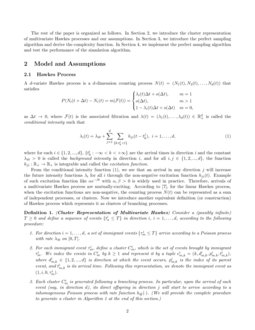 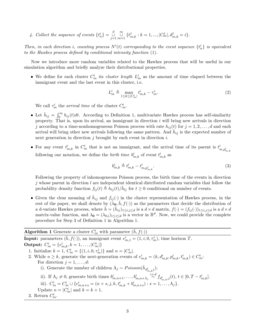 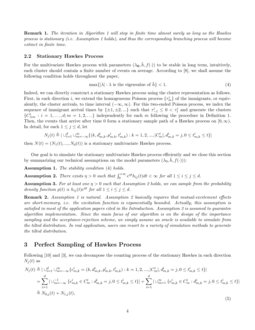 As an extension of self-exciting Hawkes process, the multivariate Hawkes process has been popularly used in literature to model the counting process of different types of random events because of its ability to capture mutual excitation. In finance, multivariate Hawkes process is used to examine market returns and investor sentiment interactions [15] and predict cyber-attacks frequency [2]. In medical science, it is used to fit clinical events in patient treatment trajectory [5]. In population dynamics, it is adopted in modeling the lapse risk in life insurance [1]. In social media, retweet cascades [13] and popularity evolution of mobile Apps [12] can be well predicted using this process.

as Δt→0, where F(t) is the associated filtration and λ(t)=(λ1(t),…,λd(t))∈Rd+ is called the conditional intensity such that

From the conditional intensity function (1), we see that an arrival in any direction j will increase the future intensity functions λi for all i through the non-negative excitation function hji(t). Example of such excitation function like αe−βt with α,β>0 is widely used in practice. Therefore, arrivals of a multivariate Hawkes process are mutually-exciting. According to [7], for the linear Hawkes process, when the excitation functions are non-negative, the counting process N(t) can be represented as a sum of independent processes, or clusters. Now we introduce another equivalent definition (or construction) of Hawkes process which represents it as clusters of branching processes.

(Cluster Representation of Multivariate Hawkes) Consider a (possibly infinite) T≥0 and define a sequence of events {tin≤T} in direction i, i=1,…,d, according to the following procedure:

Then, in each direction i, counting process Ni(t) corresponding to the event sequence {tin} is equivalent to the Hawkes process defined by conditional intensity function (1).

Now we introduce more random variables related to the Hawkes process that will be useful in our simulation algorithm and briefly analyze their distributional properties.

The iteration in Algorithm 1 will stop in finite time almost surely as long as the Hawkes process is stationary (i.e. Assumption 1 holds), and thus the corresponding branching process will become extinct in finite time.

For the multivariate Hawkes process with parameters (λ0,¯h,f(⋅)) to be stable in long term, intuitively, each cluster should contain a finite number of events on average. According to [8], we shall assume the following condition holds throughout the paper,

Indeed, we can directly construct a stationary Hawkes process using the cluster representation as follows. First, in each direction i, we extend the homogeneous Poisson process {τim} of the immigrants, or equivalently, the cluster arrivals, to time interval (−∞,∞). For this two-ended Poisson process, we index the sequence of immigrant arrival times by {±1,±2,...} such that τi−1≤0<τi1 and generate the clusters {Ci±m:i=1,…,d;m=1,2,…} independently for each m following the procedure in Definition 1. Then, the events that arrive after time 0 form a stationary sample path of a Hawkes process on [0,∞). In detail, for each 1≤j≤d, let

Our goal is to simulate the stationary multivariate Hawkes process efficiently and we close this section by summarizing our technical assumptions on the model parameters (λ0,¯h,f(⋅))):

For at least one η>0 such that Assumption 2 holds, we can sample from the probability density function p(t)∝hij(t)eηt for all 1≤i≤j≤d.

Assumption 1 is natural. Assumption 2 basically requires that mutual-excitement effects are short-memory, i.e. the excitation function is exponentially bounded. Actually, this assumption is satisfied in most of the application papers cited in the Introduction. Assumption 3 is assumed to guarantee algorithm implementation. Since the main focus of our algorithm is on the design of the importance sampling and the acceptance-rejection scheme, we simply assume an oracle is available to simulate from the tilted distribution. In real application, users can resort to a variety of simulation methods to generate the tilted distribution.

Following [10] and [3], we can decompose the counting process of the stationary Hawkes in each direction Nj(t) as

where N0,j(⋅) are corresponding to those events that come from clusters that arrived before time 0 and depart after time 0, while N1,j(⋅) are brought by immigrants arrive on [0,T]. Since the immigrants arrive on [0,T] according to homogeneous Poisson processes, {N1,j(⋅):1≤j≤d} can be simulated directly following the procedure described in Definition 1. So the key step in the perfect sampling algorithm is to simulate the clusters that arrive before time 0 and depart after time 0. With slight abusing of notation, we shall denote the set of such clusters by N0 and let N0=∪di=1Ni0 where Ni0 are the set of clusters brought by immigrants in direction i before time 0 and lasting after time 0.

For each 1≤i≤d, let pi(t)=P(Lim>t) be the probability that a cluster brought by an immigrant in direction i last for more than t units of time. Then, by Poisson thinning theorem, the clusters in Ni0 arrive on time horizon (−∞,0] according a in-homogeneous Poisson process with intensity function γi(t)=λ0,ipi(−t), for t≤0. Besides, a cluster in Ni0 should follow the conditional distribution of the branching process Cim described in Definition 1 on the event that {Lim>−τim}.

Following Definition 1, N10,…,Nd0 are independent and can be simulated separately. In our new algorithm, we extend Algorithm 1 proposed in [3] to sample, for each i, from the conditional distribution of Cim given Lim>t without evaluating the function pi(t). Also, we shall improve the efficiency of simulating the conditional distribution of Cim by importance sampling and acceptance-rejection methods. In particular, we define the total birth time as

where bim,k is the birth time of event k in cluster Cim as defined in (3), and bim,1=0 for the immigrant event. We design a change of measure based on exponential tilting of Cim with respect to Bim which is called importance distribution. To do this, let us characterize such importance distribution by analyzing the cumulant generating function (c.g.f.) of Bim.

For all i∈{1,…,d}, consider a cluster Cim in direction i with parameter (¯h,f(⋅)). Let Lim and Bim be its cluster length and total birth time, respectively. Then, the following statements are true:

We prove the three statements of Proposition 1 one by one.

(1). Given i, to see Bim≥Lim, it is intuitive to represent the cluster as a tree ignoring the direction of each event. Let the immigrant event τim be the root node and link each event tim,k to its parent event by an edge of length bim,k. Then Bim is equal to the total length of all edges in the tree while Lim is equal to the length of the longest path(s) from the root node to a leaf node. Therefore, Bim≥Lim.

As a consequence, we can conclude that E[exp(θ∑|Cim|k=2~bk)] is finite in a neighbourhood around the origin and so is E[exp(θBim)]. As this is true for all i, we can find θ0>0 such that the c.g.f.’s of Bim for all i are finite for all 0<θ<θ0.

Now, for fixed θ∈(0,θ0), let’s characterize (ψBi(θ))di=1. For a cluster in direction i, we denote by Kij the number of direct offsprings in direction j brought by the immigrant in direction i. Then, Kij is a Poisson random variable with mean ¯hij. Based on the self-similarity property of the branching process, a direct child event in direction j of the immigrant will bring a sub-cluster following the same distribution as a cluster Cj, and thus the total birth time of this sub-cluster follows the same distribution as Bj. For all 1≤i,j≤d, let bij(k) be i.i.d. copies of birth time following the probability density fij(t) and Bj(k) be i.i.d. copies of total birth time Bj, for k=1,2,...,Kij. Then, we have

with ψfij,η(θ)=ψfij(η+θ)−ψfij(η) be the c.g.f. corresponding to probability density function fij,η(⋅). The above calculation shows that ψB,η(θ) equals exactly to the c.g.f. of the total birth time of a cluster with parameter (¯hijexp(ψfij(η)+ψBj(η)),fij,η(⋅))j=1,…,d. Therefore, to simulate the exponentially tilted distribution of Ci with parameter η is equivalent to generate a cluster such that number of direct child events in direction j of an event in direction i is a Poisson with mean ¯hijexp(ψfij(η)+ψBj(η)), and their birth time following the density function fij,η(t).

Given Proposition 1, we know how to simulate the importance distribution of Cim. Now we provide our perfect sampling algorithm as follows.

Algorithm 2 actually contains two importance-sampling steps. When simulating the immigrants, i.e. the arrivals of clusters, it simulates an in-homogeneous Poisson with a larger intensity function ~γi(t)≥γi(t). Now we show that the output of Algorithm 2 follows exactly the distribution of N0, and provide an explicit expression of algorithm complexity as a function of model and algorithm parameters.

The list of clusters generated by Algorithm 2 exactly follows the distribution of N0. In particular, for each direction i∈{1,…,d},

Besides, the expected total number of random variables generated by Algorithm 2 before termination is a convex function in η∈[0,θ0]d with explicit expression as follows.

Proof of Theorem 1. To prove Statement (1) for each direction i, by Poisson thinning theorem, it suffices to show that, for each m, the acceptance probability of the cluster Cim equals to

Therefore, the probability for cluster Cim to be accepted in Step 3 is

From the above calculation, we can also see that, given m and τim, and any event A∈σ(Cim), the joint probability

Therefore, the accepted sample of Cim indeed follows the conditional distribution of Cim given {Lim>−τim}, and we obtain Statement (2).

, the moment generating function of the clusters under the importance distribution is finite in a neighbourhood around 0 and the corresponding branching processes are all stable. Then the determinant

As a consequence, the expected total number of random variables is