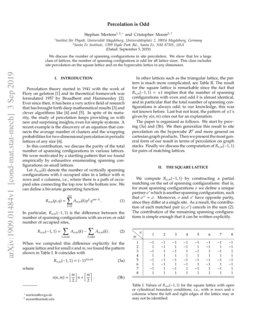 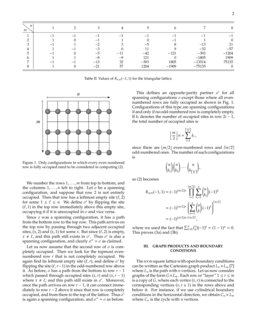 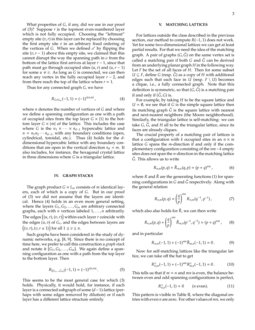 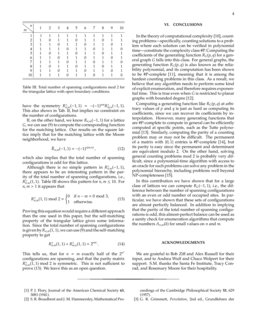 We show that the problem of deciding whether a given Euclidean lattice L...
Christoph Hunkenschröder, et al. ∙

Substitutes for the non-existent square lattice designs for 36 varieties

In this paper we consider the problem of computing an optimal set of mot...
Alexander Botros, et al. ∙

Percolation theory started in 1941 with the work of Flory on gelation Flory (1941) and its theoretical framework was formulated 1957 by Broadbent and Hammersley Broadbent and Hammersley (1957). Ever since then, it has been a very active field of research that has brought forth deep mathematical results Grimmett (1999) and clever algorithms like Hoshen and Kopelman (1976) and Newman and Ziff (2000); *newman:ziff:01

. In spite of its maturity, the study of percolation keeps providing us with new and surprising insights, even for simple systems. A recent example is the discovery of an equation that connects the average number of clusters and the wrapping probabilities for two-dimensional percolation in periodic lattices of any size

Let An,m(k) denote the number of vertically spanning configurations with k occupied sites in a lattice with m rows and n columns, i.e., where there is a path of occupied sites connecting the top row to the bottom row. We can define a bivariate generating function

In particular, Rn,m(−1,1) is the difference between the number of spanning configurations with an even or odd number of occupied sites,

When we computed this difference explicitly for the square lattice and for small n and m, we found the pattern shown in Table 1. It coincides with

In other lattices such as the triangular lattice, the pattern is much more complicated, see Table 2. The result for the square lattice is remarkable since the fact that Rn,m(−1,1)=±1 implies that the number of spanning configurations with even and odd k is almost identical, and in particular that the total number of spanning configurations is always odd; to our knowledge, this was not known before. Last but not least, the pattern of ±1’s given by s(n,m) cries out for an explanation.

The paper is organized as follows. We start by proving (3a) and (3b). We then generalize this result to site percolation on the hypercube Zd and more general on cartesian graph products. Then we present the most general form of our result in terms of percolation on graph stacks. Finally we discuss the computation of Rn,m(−1,1) for pairs of matching lattices.

We number the rows 1,…,m from top to bottom, and the columns 1,…,n left to right. Let σ be a spanning configuration, and suppose that row 2 is not entirely occupied. Then that row has a leftmost empty site (ℓ,2) for some 1≤ℓ≤n. We define σ′ by flipping the site (ℓ,1) in the top row immediately above this empty site, occupying it if it is unoccupied in σ and vice versa.

Let us now assume that the second row of σ is completely occupied. Then we look for the topmost even-numbered row r that is not completely occupied. We again find its leftmost empty site (ℓ,r), and define σ′ by flipping the site (ℓ,r−1) in the odd-numbered row above it. As before, σ has a path from the bottom to row r−1 which passed through occupied sites (x,r) and (x,r−1) where x≠ℓ, and this path still exists in σ′. Moreover, once the path arrives on row r−1, it can connect immediately to row r−2 above it since that row is completely occupied, and from there to the top of the lattice. Thus σ′ is again a spanning configuration, and σ′′=σ as before.

since there are ⌊m/2⌋ even-numbered rows and ⌈m/2⌉ odd-numbered ones. The number of such configurations is

The n×m square lattice with open boundary conditions can be written as the Cartesian graph product Ln×Lm Harary (1969) where Ln is the path with n vertices. Let us now consider graphs of the form G×Lm. Each row or “layer” 1≤r≤m is a copy of G, where each vertex (v,r) is connected to the corresponding vertices (v,r±1) in the rows above and below it. For instance, if we use cylindrical boundary conditions in the horizontal direction, we obtain Cn×Lm where Cn is the cycle with n vertices.

What properties of G, if any, did we use in our proof of (3)? Suppose r is the topmost even-numbered layer which is not fully occupied. Choosing the “leftmost” empty site (v,r) in this layer can be replaced by choosing the first empty site v in an arbitrary fixed ordering of the vertices of G. When we defined σ′ by flipping the site (v,r−1) above this empty site, we claimed that this cannot disrupt the way the spanning path in σ from the bottom of the lattice first arrives at layer r−1, since that path must go through occupied sites (u,r) and (u,r−1) for some u≠v. As long as G is connected, we can then reach any vertex in the fully occupied layer r−2, and from there reach the top of the lattice where r=1.

Thus for any connected graph G, we have

where n denotes the number of vertices of G and where we define a spanning configuration as one with a path of occupied sites from the top layer G×{1} to the bottom layer G×{m} of the lattice. This includes the case where G is the n1×⋯×nd−1 hypercubic lattice and n=n1n2⋯nd−1, with any boundary conditions (open, cylindrical, toroidal, etc.). Thus (4) holds for the d-dimensional hypercubic lattice with any boundary conditions that are open in the vertical direction nd=m. It also includes, for instance, the hexagonal crystal lattice in three dimensions where G is a triangular lattice.

The graph product G×Lm consists of m identical layers, each of which is a copy of G. But in our proof of (3) we did not assume that the layers are identical. Hence (4) holds in an even more general setting, where the layers G1,G2,…,Gm are arbitrary connected graphs, each with n vertices labeled 1,…,n arbitrarily. The edges ((u,r),(v,r)) within each layer r coincide with the edges (u,v) of Gr, and the edges between layers are ((v,r),(v,r±1)) for all 1≤v≤n.

Such graphs have been considered in the study of dynamic networks, e.g. Holme and Saramäki (2012); Ghasemian et al. (2016). Since there is no concept of time here, we prefer to call this construction a graph stack and notate it [G1,G2,…,Gm]. We again define a spanning configuration as one with a path from the top layer to the bottom layer. Then

This seems to be the most general case for which (3) holds. Physically, it would hold, for instance, if each layer is a connected subgraph of some (d−1)-lattice (perhaps with some edges removed by dilution) or if each layer has a different lattice structure entirely.

For lattices outside the class described in the previous section, our method to compute R(−1,1) does not work. Yet for some two-dimensional lattices we can get at least partial results. For that we need the idea of the matching graph. A pair of graphs (G,^G) on the same vertex set is called a matching pair if both G and ^G can be derived from an underlying planar graph H in the following way. Let F be the set of all faces of H. Then for some subset U⊆F, define G (resp. ^G) as a copy of H with additional edges such that each face in U (resp. F∖U) becomes a clique, i.e., a fully connected graph. Note that this definition is symmetric, so that (G,^G) is a matching pair if and only if (^G,G) is.

The crucial property of a matching pair of lattices is that a configuration with k occupied sites in an n×m lattice G spans the m-direction if and only if the complementary configuration consisting of the nm−k empty sites does not span the n-direction in the matching lattice ^G. This allows us to write

where R and ^R are the generating functions (1) for spanning configurations in G and ^G respectively. Along with the general relation

which also also holds for ^R, we can then write

Now for self-matching lattices like the triangular lattice, we can take off the hat to get

This tells us that if m=n and mn is even, the balance between even and odd spanning configurations is perfect,

This pattern is visible in Table 2, where the diagonal entries with even n are zero. For other values of mn, we only have the symmetry R△n,m(−1,1)=−(−1)nmR△m,n(−1,1). This also shows in Tab. 2, but implies no constraint on the number of configurations.

which also implies that the total number of spanning configurations is odd for this lattice.

Although there is no simple pattern in R△n.m(−1,1), there appears to be an interesting pattern in the parity of the total number of spanning configurations, i.e., R△n.m(1,1). Table 3 shows this pattern for n,m≤10. For n,m>1 it appears that

This tells us, that for n=m exactly half of the 2n2 configurations are spanning, and that the parity matrix R△n,m(1,1)mod2 is symmetric. This is not sufficient to prove (13). We leave this as an open question.

In the theory of computational complexity

Moore and Mertens (2011), counting problems—specifically, counting solutions to a problem where each solution can be verified in polynomial time—constitute the complexity class #P. Computing the coefficients of the generating function RG(p,q) for a general graph G falls into this class. For general graphs, the generating function RG(p,q) is also known as the reliability polynomial, and its computation has been shown to be #P-complete Valiant (1979a), meaning that it is among the hardest counting problems in this class. As a result, we believe that any algorithm needs to perform some kind of explicit enumeration, and therefore requires exponential time. This is true even when G is restricted to planar graphs with bounded degree Provan (1986).

Computing a generating function like RG(p,q) at arbitrary values of p and q

is just as hard as computing its coefficients, since we can recover its coefficients by interpolation. However, many generating functions that are #P-complete to compute in general can be efficiently computed at specific points, such as the Tutte polynomial

Jaeger et al. (1990). Similarly, computing the parity of a counting problem may or may not be difficult. The permanent of a matrix with {0,1} entries is #P-complete Valiant (1979b), but its parity is easy since the permanent and determinant are equivalent modulo 2. On the other hand, solving general counting problems mod 2 is probably very difficult, since a polynomial-time algorithm with access to an oracle for such problems can solve any problem in the polynomial hierarchy, including problems well beyond NP-completeness Toda (1991).

In this contribution we have shown that for a large class of lattices we can compute RG(−1,1), i.e., the difference between the number of spanning configurations with an even or odd number of occupied sites. In particular, we have shown that these sets of configurations are almost perfectly balanced. In addition to implying that the parity of the total number of spanning configurations is odd, this almost-perfect balance can be used as a sanity check for enumeration algorithms that compute the numbers An,m(k) for small values on n and m.

We are grateful to Bob Ziff and Alex Russell for their input, and to Andrea Wulf and Chaco Wolpert for their support. S.M. thanks the Santa Fe Institute, Tracy Conrad, and Rosemary Moore for their hospitality.