Image stitching is challenging in consumer-level photography, due to alignment difficulties in unconstrained shooting environment. Recent studies show that seam-cutting approaches can effectively relieve artifacts generated by local misalignment. Normally, seam-cutting is described in terms of energy minimization, however, few of existing methods consider human perception in their energy functions, which sometimes causes that a seam with minimum energy is not most invisible in the overlapping region. In this paper, we propose a novel perception-based energy function in the seam-cutting framework, which considers the nonlinearity and the nonuniformity of human perception in energy minimization. Our perception-based approach adopts a sigmoid metric to characterize the perception of color discrimination, and a saliency weight to simulate that human eyes incline to pay more attention to salient objects. In addition, our seam-cutting composition can be easily implemented into other stitching pipelines. Experiments show that our method outperforms the seam-cutting method of the normal energy function, and a user study demonstrates that our composed results are more consistent with human perception. 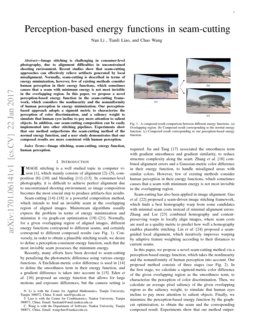 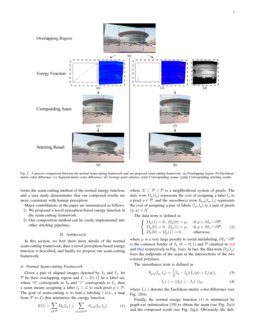 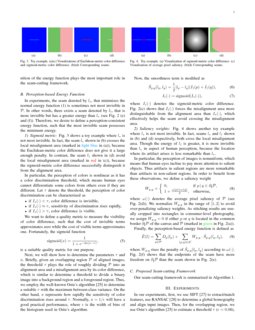 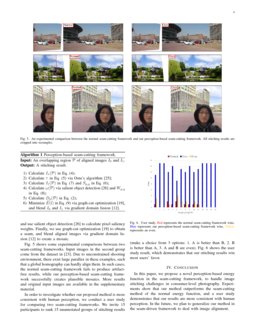 Image stitching is a well studied topic in computer vision

[1], which mainly consists of alignment [2, 3, 4, 5], composition [6, 7, 8, 9, 10] and blending [11, 12, 13]. In consumer-level photography, it is difficult to achieve perfect alignment due to unconstrained shooting environment, so image composition becomes the most crucial step to produce artifacts-free results.

Seam-cutting [14, 15, 16, 17, 18] is a powerful composition method, which intends to find an invisible seam in the overlapping region of aligned images. Mainstream algorithms usually express the problem in terms of energy minimization and minimize it via graph-cut optimization [19, 20, 21]. Normally, for a given overlapping region of aligned images, different energy functions correspond to different seams, and certainly correspond to different composed results (see Fig. 1). Conversely, in order to obtain a plausible stitching result, we desire to define a perception-consistent energy function, such that the most invisible seam possesses the minimum energy.

Seam-cutting has also been applied in image alignment. Gao et al. [22] proposed a seam-driven image stitching framework, which finds a best homography warp from some candidates with minimal seam costs instead of minimal alignment errors. Zhang and Liu [23] combined homography and content-preserving warps to locally align images, where seam costs are used as a quality metric to predict how well a homography enables plausible stitching. Lin et al. [24] proposed a seam-guided local alignment, which iteratively improves warping by adaptive feature weighting according to their distances to current seams.

In this paper, we propose a novel seam-cutting method via a perception-based energy function, which takes the nonlinearity and the nonuniformity of human perception into account. Our proposed method consists of three stages (see Fig. 2). In the first stage, we calculate a sigmoid-metric color difference of the given overlapping region as the smoothness term, to characterize the perception of color discrimination. Then, we calculate an average pixel saliency of the given overlapping region as the saliency weight, to simulate that human eyes incline to pay more attention to salient objects. Finally, we minimize the perception-based energy function by the graph-cut optimization, to obtain the seam and the corresponding composed result. Experiments show that our method outperforms the seam-cutting method of the normal energy function, and a user study demonstrates that our composed results are more consistent with human perception.

Major contributions of the paper are summarized as follows.

Given a pair of aligned images denoted by I0 and I1, let P be their overlapping region and L={0,1} be a label set, where “0” corresponds to I0 and “1” corresponds to I1, then a seam means assigning a label lp∈L to each pixel p∈P. The goal of seam-cutting is to find a labeling l (i.e., a map from P to L) that minimizes the energy function

The data term is defined as

where μ is a very large penalty to avoid mislabeling, ∂Ik∩∂P is the common border of Ik (k=0,1) and P (marked in red and blue respectively in Fig. 1(a)). In fact, the data term Dp(lp) fixes the endpoints of the seam as the intersections of the two colored polylines.

The smoothness term is defined as

where I∗(⋅) denotes the Euclidean-metric color difference (see Fig. 2(b)).

In experiments, the seam denoted by l∗, that minimizes the normal energy function (1) is sometimes not most invisible in P. In other words, there exists a seam denoted by l†, that is more invisible but has a greater energy than l∗ (see Fig. 2 (e) and (f)). Therefore, we desire to define a perception-consistent energy function, such that the most invisible seam possesses the minimum energy.

Fig. 3 shows a toy example where l∗ is not most invisible. In fact, the seam l∗ shown in (b) crosses the local misalignment area (marked in light blue in (a)), because the Euclidean-metric color difference does not give it a large enough penalty. In contrast, the seam l† shown in (d) avoid the local misalignment area (marked in red in (c)), because the sigmoid-metric color difference successfully distinguish it from the alignment area.

is a suitable quality metric for our purpose.

with the maximum between-class variance. On the other hand,

κ represents how rapidly the sensitivity of color discrimination rises around τ. Normally, κ=1/ϵ will have a good practical performance, where ϵ is the width of bins of the histogram used in Ostu’s algorithm.

Now, the smoothness term is modified as

Fig. 4 shows another toy example where l∗ is not most invisible. In fact, seams l∗ and l† shown in (b) and (d) respectively, both cross the local misalignment area. Though the energy of l† is greater, it is more invisible than l∗ in aspect of human perception, because the location where its artifact arises is less remarkable than l∗.

In particular, the perception of images is nonuniform, which means that human eyes incline to pay more attention to salient objects. Thus artifacts in salient regions are more remarkable than artifacts in non-salient regions. In order to benefit from these observations, we define a saliency weight

where ω(⋅) denotes the average pixel saliency of P (see Fig. 2(d)). We normalize Wp,q in the range of [1,2] to avoid over-penalizing saliency weights. As stitching results are usually cropped into rectangles in consumer-level photography, we assign Wp,q=0 if either p or q is located in the common border ∂♯P of the canvas and P (marked in green in Fig. 2(a)).

Finally, the perception-based energy function is defined as

where Wp,q rises the penalty of ~Sp,q(lp,lq) according to ω(⋅). Fig. 2(f) shows that the endpoints of the seam have more freedom on ∂♯P than the seam shown in Fig. 2(e).

Our seam-cutting framework is summarized in Algorithm 1.

In our experiments, first, we use SIFT [27] to extract/match features, use RANSAC [28] to determine a global homography and align input images. Then, for the overlapping region, we use Ostu’s algorithm [25]

to estimate a threshold

τ (ϵ=0.06), and use salient object detection [26] to calculate pixel saliency weights. Finally, we use graph-cut optimization [19] to obtain a seam, and blend aligned images via gradient domain fusion [12] to create a mosaic.

Fig. 5 shows some experimental comparisons between two seam-cutting frameworks. Input images in the second group come from the dataset in [23]. Due to unconstrained shooting environment, there exist large parallax in these examples, such that a global homography can hardly align them. In such cases, the normal seam-cutting framework fails to produce artifact-free results, while our perception-based seam-cutting framework successfully creates plausible mosaics. More results and original input images are available in the supplementary material.

In order to investigate whether our proposed method is more consistent with human perception, we conduct a user study for comparing two seam-cutting frameworks. We invite 15 participants to rank 15 unannotated groups of stitching results (make a choice from 3 options: 1. A is better than B, 2. B is better than A, 3. A and B are even). Fig. 6 shows the user study result, which demonstrates that our stitching results win most users’ favor.

In this paper, we propose a novel perception-based energy function in the seam-cutting framework, to handle image stitching challenges in consumer-level photography. Experiments show that our method outperforms the seam-cutting method of the normal energy function, and a user study demonstrates that our results are more consistent with human perception. In the future, we plan to generalize our method in the seam-driven framework to deal with image alignment.