A graph puzzle Puz(G) of a graph G is defined as follows. A configuration of Puz(G) is a bijection from the set of vertices of a board graph G to the set of vertices of a pebble graph G. A move of pebbles is defined as exchanging two pebbles which are adjacent on both a board graph and a pebble graph. For a pair of configurations f and g, we say that f is equivalent to g if f can be transformed into g by a sequence of finite moves. Let Aut(G) be the automorphism group of G, and let 1_G be the unit element of Aut(G). The pebble exchange group of G, denoted by Peb(G), is defined as the set of all automorphisms f of G such that 1_G and f are equivalent to each other. In this paper, some basic properties of Peb(G) are studied. Among other results, it is shown that for any connected graph G, all automorphisms of G are contained in Peb(G^2), where G^2 is a square graph of G. 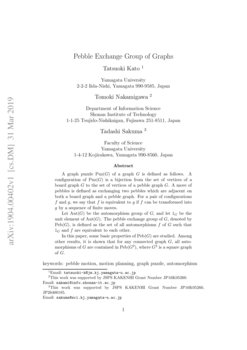 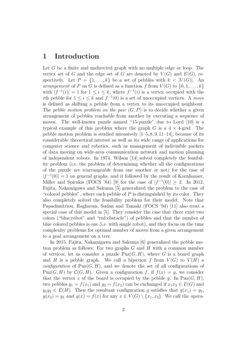 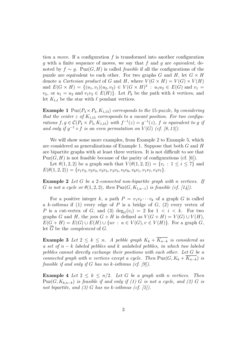 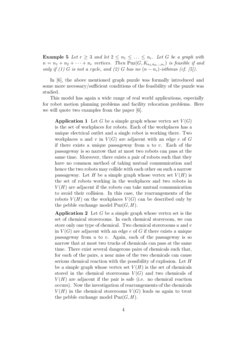 Spectral and Combinatorial Properties of Some Algebraically Defined Graphs

On complexity of mutlidistance graph recognition in R^1

Let A be a set of positive numbers. A graph G is called an A-embeddable ...
Mikhail Tikhomirov, et al. ∙

The Known Menger's theorem states that in a finite graph, the size of a ...
Mouhamad El Joubbeh, et al. ∙

Frames for Graph Signals on the Symmetric Group: A Representation Theoretic Approach

A group law for PKC purposes

On the number of non-G-equivalent minimal abelian codes

Let G be a finite abelian group. We prove that the number of non-G-equiv...
Fatma Altunbulak Aksu, et al. ∙

Let G be a finite and undirected graph with no multiple edge or loop. The vertex set of G and the edge set of G are denoted by V(G) and E(G), respectively. Let P={1,…,k} be a set of pebbles with k<|V(G)|. An arrangement of P on G is defined as a function f from V(G) to {0,1,…,k} with |f−1(i)|=1 for 1≤i≤k, where f−1(i) is a vertex occupied with the ith pebble for 1≤i≤k and f−1(0) is a set of unoccupied vertices. A move is defined as shifting a pebble from a vertex to its unoccupied neighbour. The pebble motion problem on the pair (G,P) is to decide whether a given arrangement of pebbles reachable from another by executing a sequence of moves. The well-known puzzle named “15-puzzle” due to Loyd [10] is a typical example of this problem where the graph G is a 4×4-grid. The pebble motion problem is studied intensively [1, 2, 3, 4, 5, 8, 9, 11, 12, 13, 14], because of its considerable theoretical interest as well as its wide range of applications for computer science and robotics, such as management of indivisible packets of data moving on wide-area communication network and motion planning of independent robots. In 1974, Wilson[14] solved completely the feasibility problem (i.e. the problem of determining whether all the configurations of the puzzle are rearrangeable from one another or not) for the case of |f−1(0)|=1 on general graphs, and it followed by the result of Kornhauser, Miller and Spirakis (FOCS ’84)[9] for the case of |f−1(0)|≥2. In 2012, Fujita, Nakamigawa and Sakuma[5] generalized the problem to the case of “colored pebbles”, where each pebble of P is distinguished by its color. They also completely solved the feasibility problem for their model. Note that Papadimitriou, Raghavan, Sudan and Tamaki (FOCS ’94)[11] also treat a special case of this model in[5]. They consider the case that there exist two colors (“blue:robot” and “red:obstacle”) of pebbles and that the number of blue colored pebbles is one (i.e. with single robot), and they focus on the time complexity problems for optimal number of moves from a given arrangement to a goal arrangement on a tree.

In 2015, Fujita, Nakamigawa and Sakuma [6] generalized the pebble motion problem as follows: For two graphs G and H with a common number of vertices, let us consider a puzzle Puz(G,H), where G is a board graph and H is a pebble graph. We call a bijection f from V(G) to V(H) a configuration of Puz(G,H), and we denote the set of all configurations of Puz(G,H) by C(G,H). Given a configuration f, if f(x)=y, we consider that the vertex x of the board is occupied by the pebble y. In Puz(G,H), two pebbles y1=f(x1) and y2=f(x2) can be exchanged if x1x2∈E(G) and y1y2∈E(H). Then the resultant configuration g satisfies that g(x1)=y2, g(x2)=y1 and g(x)=f(x) for any x∈V(G)∖{x1,x2}. We call the operation a move. If a configuration f is transformed into another configuration g with a finite sequence of moves, we say that f and g are equivalent, denoted by f∼g. Puz(G,H) is called feasible if all the configurations of the puzzle are equivalent to each other. For two graphs G and H, let G×H denote a Cartesian product of G and H, where V(G×H)=V(G)×V(H) and E(G×H)={(u1,v1)(u2,v2)∈V(G×H)2:u1u2∈E(G) and v1=v2, or u1=u2 and v1v2∈E(H)}. Let Pk be the path with k vertices, and let K1,ℓ be the star with ℓ pendant vertices.

We will show some more examples, from Example 2 to Example 5, which are considered as generalizations of Example 1. Suppose that both G and H are bipartite graphs with at least three vertices. It is not difficult to see that Puz(G,H) is not feasible because of the parity of configurations (cf. [6]).

In [6], the above mentioned graph puzzle was formally introduced and some more necessary/sufficient conditions of the feasibility of the puzzle was studied.

This model has again a wide range of real world applications, especially for robot motion planning problems and facility relocation problems. Here we will quote two examples from the paper[6].

In this paper, we will shed light on some algebraic property of the puzzle, which is of not only theoretical interest, but also practical importance, as will be discussed later.

In the following, we only consider the case where a board graph and a pebble graph are the same, and we denote C(G,G) and Puz(G,G) simply by C(G) and Puz(G), respectively.

The automorphism group of a graph G, denoted by Aut(G), is the group which consists of all bijections f from V(G) to V(G) such that f(x1)f(x2)∈E(G) if and only if x1x2∈E(G). Let 1G, or simply 1, denote the identity element of Aut(G). Let us introduce the pebble exchange group of G, denoted by Peb(G), as the group which consists of all automorphisms f of G such that 1G and f are equivalent in Puz(G). If f,g∈Peb(G), there exists a finite sequence of configurations f=f0,f1,…,fs=g, where fi is generated from fi−1 by a move of Puz(G) for all 1≤i≤s. We remark that for 1≤i≤s−1, fi is not necessarily an automorphism of G. It is not difficult to see that Peb(G) turns out a normal subgroup of Aut(G).

For example, please recall Application 2 in the above. From a given stable disposition of chemicals with no more information about the store system, one of the most moderate assumptions would be that two chemical storerooms are adjacent with a passageway only if the pair of corresponding two chemicals is safe. This situation leads us to treat the pebble exchange model Puz(G). Moreover, in such case, any rearrangement from a stable disposition to another stable disposition should be corresponding to an element of Aut(G). Hence if we can show the equation Peb(G)=Aut(G) here, it means that practically all the necessary and sufficient dispositions are rearrangeable from one another.

However, it seems to be highly nontrivial and difficult problem to characterize completely the graphs whose pebble exchange groups are equal to their automorphism groups. Hence, before to attack this problem directly, in this paper we will show that the class of graphs G satisfying Peb(G)=Aut(G) is considerably large. Especially, we prove (Theorem 5) that, for any connected graph G, the pebble exchange group of the square of G contains a subgroup isomorphic to the automorphism group of G. This result is somewhat surprising since the square of a sparse graph G is apt to sparse and the puzzle Puz(G2) is also far from feasible in general. By using this result, for example, we can show that, for any connected graph G, if we 2-subdivide all the edges of G, and if we take its square, the resulting graph H satisfies the equation Peb(H)=Aut(H).

It is known that for any finite group Γ, there exists a graph G such that Aut(G)≃Γ (cf. [7]). By using this fact, we have the following result.

For any finite group Γ, there exists a graph G such that Peb(G)≃Γ.

Second, we note a simple observation about Peb(G), where G contains no small cycle. For a graph G, the girth of G, denoted by girth(G), is the order of the smallest cycle contained in G. If G contains no cycle, girth(G) is defined as ∞. A matching of a graph G is a set of independent edges of G. For a matching M of a graph G, let f(M) be a configuration of Puz(G) such that for all x∈V(M), f(x)=y, where xy∈E(M), and f(x)=x for all x∉V(M). Let M(G)={f(M):M is a matching of G}.

Let G be a connected graph with at least three vertices. If girth(G)≥5, then Peb(G)≃{1G}.

Proof. It is sufficient to show that if f∈C(G) satisfies 1G∼f, then f is not an automorphism of G. Claim. Let f be a configuration of G. Then f∼1G if and only if f∈M(G). First, suppose that f=f(M)∈M(G), where M is a matching of G. Starting from 1G, by exchanging all pairs of pebbles u and v satisfying uv∈M, we have f(M)∼1G.

The next result is about pebble exchange group of a product of graphs.

The proof of Theorem 3 will be given in Section 3.

Let Qn be the n-dimensional hypercubic graph. Since Qn=Pn2 and Peb(P2)≃Z/2Z, we have the following corollary as an immediate consequence of Theorem 3.

As a graph G becomes sparse, the number of possible moves on G decrease. Hence, it is interesting to show the existence of graphs G such that Peb(G) has a rich structure and |E(G)|=O(|V(G)|).

The main result of the paper is the following theorem.

For any connected graph G, Peb(G2)⊃Aut(G).

In order to prove Theorem 5, we first deal with the simplest but the most important case, where G is a path.

The proof of Proposition 6 will be given in Section 4.

The following lemma may arouse an independent interest apart from pebble exchange puzzles.

For a connected graph G, and for any two configurations f, g∈Aut(G), f can be transformed into g by a finite sequence of path flips.

The proof of Lemma 7 will be given in Section 5.

By using this notation, 1n and αn is expressed as

We claim that τ is an automorphism of H, because for 0≤k≤n−1, σ|Hk is an isomorphism from Hk to Hk+1 and σ1−m|Hm−1 is an isomorphism from Hm−1 to H0. Furthermore, by definition, the order of τ is m. Since m<n, by the minimality of n, τ is realizable by path flips. On the other hand, σm|H0 is an automorphism of H0. Since the order of σm|H0=n/m<n, by the minimality of n, σm|H0 is realizable by path flips. Since <span aria-label="\sigma" class="m