Climate models project an uncertainty range of possible warming scenarios from 1.5 to 5 degree Celsius global temperature increase until 2100, according to the CMIP6 model ensemble. Climate risk management and infrastructure adaptation requires the accurate quantification of the uncertainties at the local level. Ensembles of high-resolution climate models could accurately quantify the uncertainties, but most physics-based climate models are computationally too expensive to run as ensemble. Recent works in physics-informed neural networks (PINNs) have combined deep learning and the physical sciences to learn up to 15k faster copies of climate submodels. However, the application of PINNs in climate modeling has so far been mostly limited to deterministic models. We leverage a novel method that combines polynomial chaos expansion (PCE), a classic technique for uncertainty propagation, with PINNs. The PCE-PINNs learn a fast surrogate model that is demonstrated for uncertainty propagation of known parameter uncertainties. We showcase the effectiveness in ocean modeling by using the local advection-diffusion equation. 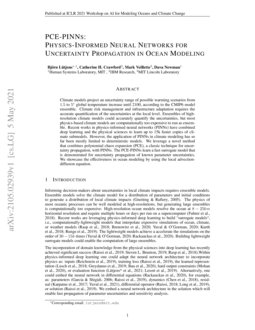 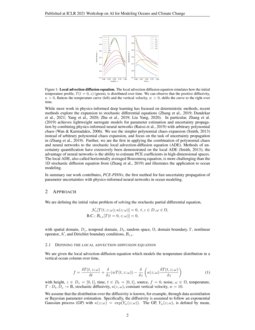 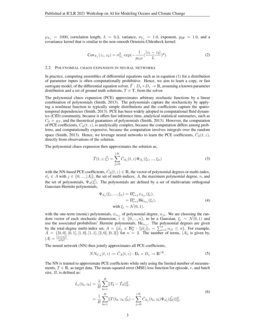 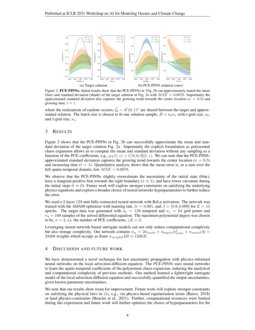 Informing decision-makers about uncertainties in local climate impacts requires ensemble models. Ensemble models solve the climate model for a distribution of parameters and initial conditions to generate a distribution of local climate impacts (Gneiting_2005). The physics of most oceanic processes can be well modeled at high-resolutions, but generating large ensembles is computationally too expensive: High-resolution ocean models resolve the ocean at 8−25km horizontal resolution and require multiple hours or days per run on a supercomputer (Fuhrer_2018)

(Raissi_2019) with arbitrary polynomial chaos (Wan_2006). We use the simpler polynomial chaos expansion (Smith_2013) instead of arbitrary polynomial chaos expansion, and focus on the task of uncertainty propagation in (Zhang_2019). Further, we are the first in applying the combination of polynomial chaos and neural networks to the stochastic local advection-diffusion equation (ADE). Methods of uncertainty quantification have extensively been demonstrated on the local ADE (Smith_2013); the advantage of neural networks is the ability to estimate PCE coefficients in high-dimensional spaces. The local ADE, also called horizontally averaged Boussinesq equation, is more challenging than the 1D stochastic diffusion equation from (Zhang_2019) and illustrates the application to ocean modeling.

In summary our work contributes, PCE-PINNs, the first method for fast uncertainty propagation of parameter uncertainties with physics-informed neural networks in ocean modeling.

We are defining the initial value problem of solving the stochastic partial differential equation,

We are given the local advection-diffusion equation which models the temperature distribution in a vertical ocean column over time,

We assume that the distribution over the diffusivity is known, for example, through data assimilation or Bayesian parameter estimation. Specifically, the diffusivity is assumed to follow an exponential Gaussian process (GP) with κ(z;ω)=exp(Yκ(z;ω)). The GP, Yκ(z;ω), is defined by mean, μYκ=1000, correlation length, L=0.3

σYκ=1.0, exponent, pGP=1.0, and a covariance kernel that is similar to the non-smooth Ornstein-Uhlenbeck kernel:

In practice, computing ensembles of differential equations such as in equation Equation 1 for a distribution of parameter inputs is often computationally prohibitive. Hence, we aim to learn a copy, or fast surrogate model, of the differential equation solver, ^T:Dx×Dz→R, assuming a known parameter distribution and a set of ground truth solutions, T∈T, from the solver.

The polynomial chaos expansion then approximates the solution as,

, the vector of polynomial degrees or multi-index,

The neural network (NN) then jointly approximates all PCE coefficients,

The NN is trained to approximate PCE coefficients while only using the limited number of measurements, T∈R

where the realizations of random vectors, →ξb∼N(0,1)n are shared between the target and approximated solution. The batch size is chosen to fit one solution sample, B=ntnz with t-grid size, nt, and z-grid size, nz.

Figure 2 shows that the PCE-PINNs in Fig. 1(b) can successfully approximate the mean and standard deviation of the target solution Fig. 1(a). Importantly the explicit formulation as polynomial chaos expansion allows us to compute the mean and standard deviation without any sampling as a function of the PCE coefficients, e.g., μT(t,z)=C[0,0,0](t,z). We can note that the PCE-PINN-approximated standard deviation captures the growing trend towards the center location (x=0.5) and increasing time (t=1). Quantitative analysis shows that the mean error is, as a sum over the full spatio-temporal domain, low MSE=0.0078.

We observe that the PCE-PINNs slightly overestimate the uncertainty of the initial state (blue), have a marginal positive bias towards the right boundary (x≈1), and have lower curvature during the initial steps (t≈0

). Future work will explore stronger constraints on satisfying the underlying physics equations and explore a broader choice of neural networks hyperparameters to further reduce the error.

-unit fully-connected neural network with ReLu activation. The network was trained with the ADAM optimizer with learning rate,

We have demonstrated a novel technique for fast uncertainty propagation with physics-informed neural networks on the local advection-diffusion equation. The PCE-PINNs uses neural networks to learn the spatio-temporal coefficients of the polynomial chaos expansion, reducing the analytical and computational complexity of previous methods. Our method learned a lightweight surrogate model of the local advection-diffusion equation and successfully quantified the output uncertainties, given known parameter uncertainties.

We note that our results show room for improvement. Future work will explore stronger constraints on satisfying the physical laws in Equation 1, e.g., via physics-based regularization terms (Raissi_2018) or hard physics-constraints (Beucler_2021)

. Further, computational resources were limited during this experiment and future work will further optimize the choice of hyperparameters for the neural network. Lastly, the proposed approach requires computation of a training dataset of solved differential equation for a set of parameter samples which can quickly become computationally expensive. Future work, will explore self-supervised learning approaches to enable learned surrogate models without the use of expensive training data.