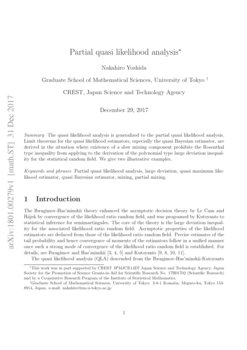 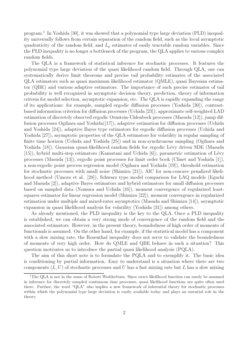 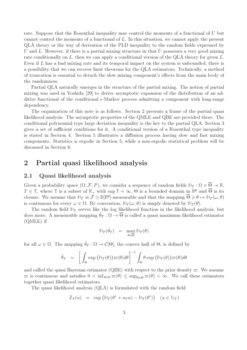 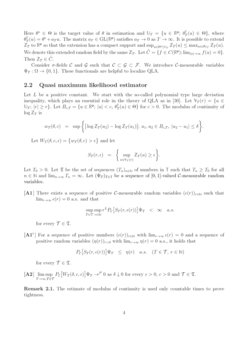 The asymptotic decision theory by Le Cam and Hajek has been given a luci...
Nakahiro Yoshida, et al. ∙

We develop a quasi-likelihood analysis procedure for a general class of ...
Simon Clinet, et al. ∙

The quasi likelihood analysis (QLA) descended from the Ibragimov-Has’minskii-Kutoyants program.333The QLA is not in the sense of Robert Wedderburn. Since exact likelihood function can rarely be assumed in inference for discretely sampled continuous time processes, quasi likelihood functions are quite often used there. Further, the word “QLA” also implies a new framework of inferential theory for stochastic processes within which the polynomial type large deviation is easily available today and plays an essential role in the theory. In Yoshida [30], it was showed that a polynomial type large deviation (PLD) inequality universally follows from certain separation of the random field, such as the local asymptotic quadraticity of the random field, and Lp

estimates of easily tractable random variables. Since the PLD inequality is no longer a bottleneck of the program, the QLA applies to various complex random fields.

[22]), moment convergence in regularized estimation under multiple and mixed-rates asymptotics (Masuda and Shimizu [14]), asymptotic expansion in quasi likelihood analysis for volatility (Yoshida [31]) among others.

As already mentioned, the PLD inequality is the key to the QLA. Once a PLD inequality is established, we can obtain a very strong mode of convergence of the random field and the associated estimators. However, in the present theory, boundedness of high order of moments of functionals is assumed. On the other hand, for example, if the statistical model has a component with a slow mixing rate, the Rosenthal inequality does not serve to validate the boundedness of moments of very high order. How do QMLE and QBE behave in such a situation? This question motivates us to introduce the partial quasi likelihood analysis (PQLA).

The aim of this short note is to formulate the PQLA and to exemplify it. The basic idea is conditioning by partial information. Easy to understand is a situation where there are two components (L,U) of stochastic processes and U has a fast mixing rate but L has a slow mixing rate. Suppose that the Rosenthal inequality may control the moments of a functional of U but cannot control the moments of a functional of L. In this situation, we cannot apply the present QLA theory or the way of derivation of the PLD inequality to the random fields expressed by U and L. However, if there is a partial mixing structure in that U possesses a very good mixing rate conditionally on L, then we can apply a conditional version of the QLA theory for given L. Even if L has a bad mixing rate and its temporal impact on the system is unbounded, there is a possibility that we can recover limit theorems for the QLA estimators. Technically, a method of truncation is essential to detach the slow mixing component’s effects from the main body of the randomness.

Partial QLA naturally emerges in the structure of the partial mixing. The notion of partial mixing was used in Yoshida [29] to derive asymptotic expansion of the distribution of an additive functional of the conditional ϵ-Markov process admitting a component with long-range dependency.

The organization of this note is as follows. Section 2 presents a frame of the partial quasi likelihood analysis. The asymptotic properties of the QMLE and QBE are provided there. The conditional polynomial type large deviation inequality is the key to the partial QLA. Section 3 gives a set of sufficient conditions for it. A conditional version of a Rosenthal type inequality is stated in Section 4. Section 5 illustrates a diffusion process having slow and fast mixing components. Statistics is ergodic in Section 5, while a non-ergodic statistical problem will be discussed in Section 6.

Given a probability space (Ω,F,P), we consider a sequence of random fields HT:Ω×¯¯¯¯Θ→R, T∈T, where T is a subset of R+ with supT=∞, Θ is a bounded domain in Rp and ¯¯¯¯Θ is its closure. We assume that HT is F⊗B[Rp]-measurable and that the mapping ¯¯¯¯Θ∋θ↦HT(ω,θ) is continuous for every ω∈Ω. By convention, HT(ω,θ) is simply denoted by HT(θ).

The random field HT serves like the log likelihood function in the likelihood analysis, but does more. A measurable mapping ^θT:Ω→¯¯¯¯Θ is called a quasi maximum likelihood estimator (QMLE) if

and called the quasi Bayesian estimator (QBE) with respect to the prior density ϖ. We assume ϖ is continuous and satisfies 0<infθ∈Θϖ(θ)≤supθ∈Θϖ(θ)<∞. We call these estimators together quasi likelihood estimators.

The quasi likelihood analysis (QLA) is formulated with the random field

Consider σ-fields C and G such that C⊂G⊂F. We introduce C-measurable variables ΨT:Ω→{0,1}. These functionals are helpful to localize QLA.

Let L be a positive constant. We start with the so-called polynomial type large deviation inequality, which plays an essential role in the theory of QLA as in [30]. Let VT(r)={u∈UT;|r|≥r}. Let Bc,T={u∈Rp;|u|<c,θ†T(u)∈Θ} for c>0. The modulus of continuity of logZT is

] There exists a sequence of positive C-measurable random variables (ϵ(r))r∈N such that limr→∞ϵ(r)=0 a.s. and that

The estimate of modulus of continuity is used only countable times to prove tightness.

] With probability one, there exists a unique element ^u∈Rp that maximizes Z.

Remark: From [A3] (i), we can remove ΨT but keeping it explicitely is helpful in applications. We may assume ^u is ¯¯¯¯¯F-measurable; the given mapping ^u has a measurable version. The following theorems claim C-conditional G-stable convergence of ZT and ^uT=a−1T(^θT−θ∗).

for any F∈Cb(^C) and any bounded G-measurable random variable Y. In particular,

for any f∈Cb(Rp) and any bounded G-measurable random variable Y. In particular,

for all q∈Qp, and hence

for all q∈Qp, since this is obvious when Jω=0. By definition,

Conditional type PLD provides convergence of the conditional moments of ^uT under truncation.