We derive a combinatorial sufficient condition for a partial correlation hypersurface in the parameter space of a directed Gaussian graphical model to be nonsingular, and speculate on whether this condition can be used in algorithms for learning the graph. Since the condition is fulfilled in the case of a complete DAG on any number of vertices, the result implies an affirmative answer to a question raised by Lin-Uhler-Sturmfels-Bühlmann. 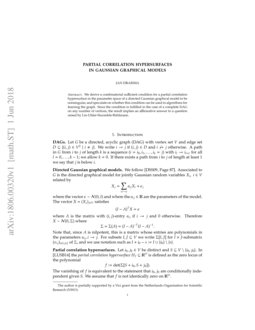 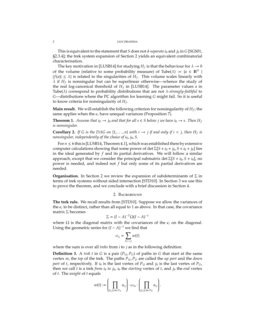 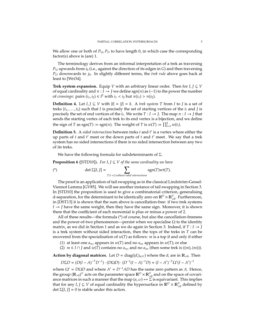 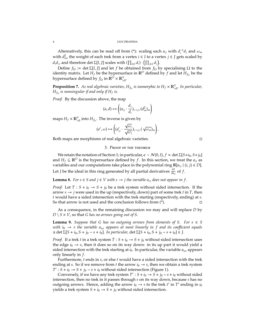 is the directed graphical model for jointly Gaussian random variables

ϵ∼N(0,I) and where the aij∈\RR are the parameters of the model. The vector X=(Xj)j∈V satisfies

where A is the matrix with (i,j)-entry aij if i→j and 0 otherwise. Therefore X∼N(0,Σ) where

Note that, since A is nilpotent, this is a matrix whose entries are polynomials in the parameters aij,i→j. For subsets I,J⊆V we write Σ[I,J] for I×J-submatrix (σij)i∈I,j∈J of Σ, and we use notation such as I+i0−s:=I∪{i0}∖{s}.

Let i0,j0∈V be distinct and S⊆V∖{i0,j0}. In [LUSB14] the partial correlation hypersurface Hf⊆\RRD is defined as the zero locus of the polynomial

of the volume (relative to some probability measure) of

Tube(λ):={a∈\RRD:|corr(i0,j0,S)|≤λ} is related to the singularities of Hf. This volume scales linearly with λ if Hf is nonsingular but can be superlinear otherwise—whence the study of the real log-canonical threshold of Hf in [LUSB14]. The parameter values a in Tube(λ)

correspond to probability distributions that are not

λ-strongly-faithful to G—distributions where the PC algorithm for learning G might fail. So it is useful to know criteria for nonsingularity of Hf.

We will establish the following criterion for nonsingularity of Hf; the same applies when the ϵi

Assume that i0→j0 and that for all s∈S below j0 we have i0→s. Then Hf is nonsingular.

For n≤6 this is [LUSB14, Theorem 4.1], which was established there by extensive computer calculations showing that some power of detΣ[S+i0+j0,S+i0+j0] lies in the ideal generated by f and its partial derivatives. Since Σ[S+i0+j0,S+i0+j0] is positive definite and hence has a nonzero determinant for all (real) values of the parameters, this shows that the (real) common vanishing locus of f and its derivatives is empty.

We will follow a similar approach, except that we consider the principal submatrix detΣ[S+i0,S+i0], no power is needed, and indeed not f but only some of its partial derivatives are needed.

In Section 2 we review the expansion of subdeterminants of Σ in terms of trek systems without sided intersection [STD10]. In Section 3 we use this to prove the theorem, and we conclude with a brief discussion in Section 4.

We recall results from [STD10]. Suppose we allow the variances of the ϵi to be distinct, rather than all equal to 1 as above. In that case, the covariance matrix Σ becomes

where Ω is the diagonal matrix with the covariances of the ϵi on the diagonal. Using the geometric series for (I−A)−1 we find that

where the sum is over all treks from i to j as in the following definition.

We allow one or both of PU,PD to have length 0, in which case the corresponding factor(s) above is (are) 1.

The terminology derives from an informal interpretation of a trek as traversing PU upwards from i0 (i.e., against the direction of its edges in G) and then traversing PD downwards to j0. In slightly different terms, the trek rule above goes back at least to [Wri34].

Let I,J⊆V with |I|=|J|=k. A trek system T from I to J is a set of treks {t1,…,tk} such that I is precisely the set of starting vertices of the tl and J is precisely the set of end vertices of the tl. We write T:I→J. The map π:I→J that sends the starting vertex of each trek to its end vertex is a bijection, and we define the sign of T as sgn(T):=sgn(π). The weight of T is w(T):=∏kl=1w(tl).

We have the following formula for subdeterminants of Σ.

[[STD10]] For I,J⊆V of the same cardinality we have

The proof is an application of tail swapping as in the classical Lindström-Gessel-Viennot Lemma [GV85]. We will see another instance of tail swapping in Section 3. In [STD10] the proposition is used to give a combinatorial criterion, generalising d-separation, for the determinant to be identically zero on \RRD×\RRV>0. Furthermore, in [DST13] it is shown that the sum above is cancellation-free: if two trek systems I→J have the same weight, then they have the same sign. Moreover, it is shown there that the coefficient of each monomial is plus or minus a power of 2.

All of these results—the formula (* ‣ 2) of course, but also the cancellation-freeness and the power-of-two phenomenon—persist when we specialise Ω

to the identity matrix, as we did in Section

1 and as we do again in Section 3. Indeed, if T:I→J is a trek system without sided interaction, then the tops of the treks in T can be recovered from the specialisation of w(T) as follows: m is a top if and only if either

where Ω′=dΩd and where A′=d−1Ad has the same zero pattern as A. Hence, the group (\RR>0)V acts on the parameter space \RRD×\RRV>0 and on the space of covariance matrices in such a manner that the map (a,ω)↦Σ is equivariant. This implies that for any I,J⊆V of equal cardinality the hypersurface in \RRD×\RRV>0 defined by detΣ[I,J]=0 is stable under this action.

Alternatively, this can be read off from (* ‣ 2): scaling each aij with d−1idj and ωm with d2m, the weight of each trek from a vertex i∈I to a vertex j∈J gets scaled by didj, and therefore detΣ[I,J] scales with (∏i∈Idi)⋅(∏j∈Jdj).

As real algebraic varieties, HfΩ is isomorphic to Hf×\RRV>0. In particular, HfΩ is nonsingular if and only if Hf is.

By the discussion above, the map

Both maps are morphisms of real algebraic varieties. ∎

3. Proof of the theorem

We retain the notation of Section 1; in particular, ϵ∼N(0,I), f=detΣ[S+i0,S+j0] and Hf⊆\RRD is the hypersurface defined by f. In this section, we treat the aij as variables and our computations take place in the polynomial ring \RR[aij∣(i,j)∈D]. Let J be the ideal in this ring generated by all partial derivatives \pafg[f]aij of f.

As a consequence, in the remaining discussion we may and will replace D by D∖S×V, so that G has no arrows going out of S.

In particular, the variable ai0s appears only linearly in f. Furthermore, t ends in s, or else t would have a sided intersection with the trek ending at s. So if we remove from t the arrow i0→s, then we obtain a trek system T′:S+i0→S+j0−s+i0 without sided intersection (Figure 1).

Hence the map T↦T′ gives a bijection between the terms in (the trek system expansion of) f divisible by ai0s and the terms in detΣ[S+i0,S+j0+i0−s]. Furthermore, sgn(T) equals ±sgn(T′), where the sign is the sign of the bijection S+j0−s+i0→S+j0 that is the identity on S+j0−s and sends i0 to s; in particular, this sign does not depend on T. ∎

Assume that i0→j0. The variable ai0j0 appears at most linearly in f and its coefficient equals ±(detΣ[S+i0,S+i0]−g) where

is the sum over all trek systems T′′:S+i0→S+i0 without sided intersection of which one trek contains j0 in its down part. In particular, detΣ[S+i0,S+i0]−g∈J.

Furthermore, t ends in j0, or else it would have a sided intersection with the trek ending at j0. So if we remove from t the arrow i0→j0, then we obtain a trek system T′′:S+i0→S+i0 without sided intersection (Figure 2). Also, sgn(T) equals sgn(T′′) times the sign of the bijection S+i0→S+j0 that is the identity on S and maps i0 to j0; this will determines the sign ± in the lemma.

Conversely, given a trek system T′′:S+i0→S+i0 without sided intersection, we may try and add the arrow i0→j0 to the trek ending in i0. The resulting trek system has no sided intersection if and only if no trek of T′′ passes j0 on its way down. The remaining T′′ must be therefore be subtracted as in the lemma. ∎

For s∈S under j0 define

the sum of the weights of all directed paths in G from j0 to s.

So the left-hand side of the equation in the lemma equals ∑T′′:S+i0→S+i0sgn(T′′)w(T′′) where W′′ runs over the trek systems with properties (1) and (2). The right-hand side is the sub-sum over all T′′ without any sided intersection. We construct a sign-changing involution on the remaining T′′, as follows.

Proof of the theorem.

We claim that the zero set of J in \RRD is empty. By Lemma 3 we may delete from G all outgoing arrows from elements of S without changing f. Since i0→j0, by Lemma 3 we have detΣ[S+i0,S+i0]−g∈J. The identity in Lemma 3 expresses g as a linear combination of the determinants in Lemma 3 where s runs over the elements of S below j0. By assumption, for each of these s we have i0→s, so Lemma 3 implies that g∈J. Hence detΣ[S+i0,S+i0]∈J. But for any set of real parameters a∈\RRD the matrix Σ[S+i0,S+i0] is positive definite, hence has a nonzero determinant. This proves the claim. ∎

4. A modest implication for the PC algorithm

In the edge-removal part of the PC algorithm [SGS01] for learning G, in each step we have an undirected graph H whose edge set, if no error has occurred so far, contains that of G. Using the sample covariance matrix, a partial correlation corr(i0,j0|S) is then computed for some triple i0,j0,S such that there is an edge i0−j0 in H and such that S is contained in the H-neighbours of i0 or in the H-neighbours of j0. Before this step all partial correlations with sets S′ of cardinality smaller than that of S have already been checked. If the absolute value of the partial correlation is less than some prescribed λ, then the edge i0−j0 is removed from H.

Our theorem suggests that it might be advantageous to perform this check first for sets S contained in the intersection of the neighbourhoods of i0 and j0 in H. Then, if all the edges between i0,j0,S present in H are also present in the DAG G (with some orientation), one readily checks that the conditions of the theorem are satisfied. Hence the volume of Tube(λ) is proportional to λ, and the region in the parameter space \RRD of G where we would erroneously delete i0−j0 in this step is small.

There are two obvious issues with this. First, in general it will not suffice to check S in the intersection of the neighbourhoods of i0 and j0. And second, the condition that all of those edges are indeed present in G is rather strong. To make better use of our theorem, one might want to develop a version of the PC algorithm where orientation steps are intertwined with the edge-deletion steps.

We conclude this paper with two examples.

To see that singular partial correlation hypersurfaces cannot be avoided in the edge removal step of the PC algorithm, consider the graph G in Figure 4, taken from [LUSB14, Example 4.8]. In the beginning, the PC algorithm finds all nonconditional independencies (so with S=∅), and hence removes the edge 1−2 to arrive at the graph H on the right. If the algorithm next chooses to consider the edge 1−4, then it will delete this edge after finding that 1,4 are independent given 3. However, by symmetry of H it is equally likely that it will first consider the edge 1−3.

In [LUSB14] it is shown that the partial correlation f with i0=1,j0=3 and S={4} has a singular hypersurface Hf⊆\RRD and that the corresponding Tube(λ) of bad parameter values is fatter. ♣

In addition to the study of correlation hypersurfaces, [LUSB14]

discusses mathematical interpretations of existing heuristics in statistics. In particular,

[LUSB14, Problem 6.2] discusses a volume inequality that would confirm the belief that “collider-stratification bias tends to attenuate when it arises from more extended paths”.

In particular, in the situation of Figure 5, their conjecture says that

The paper does not explicitly say with respect to which measure Vol is defined here. If it is supposed to be true for all measures, then the above is equivalent to corr(1,2|5)≤corr(1,2|3,4). This is certainly not true in general: taking