In this paper we define a new product-like binary operation on directed graphs, and we discuss some of its properties. We also briefly discuss its application in constructing the subtyping relation in generic nominally-typed object-oriented programming languages. 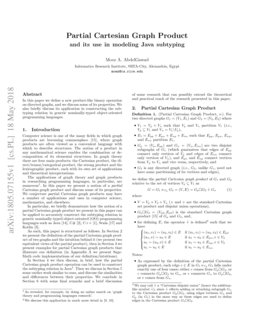 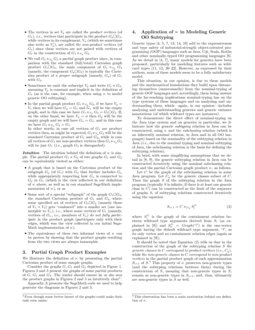 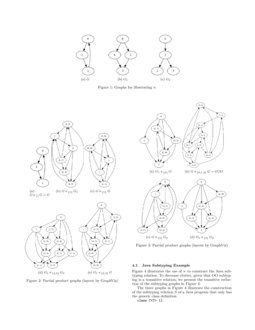 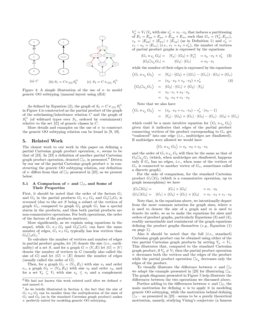 Computer science is one of the many fields in which graph products are becoming commonplace [Hammack2011, ]

, where graph products are often viewed as a convenient language with which to describe structures. The notion of a product in any mathematical science enables the combination or decomposition of its elemental structures. In graph theory there are four main products: the Cartesian product, the direct/tensor/categorical product, the strong product and the lexicographic product, each with its own set of applications and theoretical interpretations.

We conjecture partial Cartesian graph products may have a number of applications and uses in computer science, mathematics, and elsewhere. In particular, we briefly demonstrate how the notion of a partial Cartesian graph product we present in this paper can be applied to accurately construct the subtyping relation in generic nominally-typed object-oriented (OO) programming languages such as Java [JLS14, ], C# [CSharp2015, ], C++ [CPP2011, ], Scala [Odersky14, ] and Kotlin [Kotlin18, ].

The, in Section 5, we discuss some earlier work similar to ours, and discuss the similarities and differences between their properties. In Section 6 we then discuss, in brief, how the partial Cartesian graph product operation can be used to construct the subtyping relation in Java222We discuss this application in much more detail in [AbdelGawad2018b, ; AbdelGawad2018c, ].. We conclude in Section 7 with some final remarks and a brief discussion of some research that can possibly extend the theoretical and practical reach of the research presented in this paper.

The intuition behind the definition of ⋉ is simple. The partial product G1⋉G2 of two graphs G1 and G2 can be equivalently viewed as either:

We illustrate the definition of ⋉ by presenting the partial Cartesian product of some sample graphs.

Appendix A presents the SageMath code we used to help generate the diagrams in Figures 2 and 3.

In this section we discuss some of the fundamental properties of partial Cartesian graph products, particularly the size and order of constructed graphs.

while the number of edges is expressed by the equation

Note that we also have

which could be a more intuitive equation for ⟨G1⋉VpG2⟩ given that it indicates that edges of the partial product connecting vertices of the product corresponding to Gn get “coalesced” into one edge (i.e., multiedges are disallowed).

For the sake of comparison, for the standard Cartesian product G1□G2 (which is a commutative operation, up to graph isomorphism) we have

As we briefly illustrate in Section 6, the fact that the size of G1⋉SG2 can be smaller than the multiplication of the sizes of G1 and G2 (as in the standard Cartesian graph product) makes ⋉ perfectly suited for modeling generic OO subtyping.

Note that, in the equations above, we intentionally depart from the more common notation for graph sizes where n is used to denote the size of a graph and m is used to denote its order, so as to make the equations for sizes and orders of product graphs, particularly Equations (2) and (3), readily memorizable and reminiscent of the graph equations defining the product graphs themselves (e.g., Equation (1)1).

The closest work to our work in this paper seems to be that of [Yero2015, ]. In [Yero2015, ] a definition of another partial Cartesian graph product operation, denoted □S, is presented.777We had not known this work existed until after we defined ⋉ and named it. Driven by our use of the partial Cartesian graph product ⋉ in constructing the generic OO subtyping relation, our definition of ⋉ differs from that of □S presented in [Yero2015, ], as we present below.

First, it should be noted that the order of the factors G1 and G2 in the partial products G1⋉SG2 and G2□SG1 is reversed (due to the set S being a subset of the vertices of graph G1, compared to graph G2 graph G1 has a special status in the products, and thus both partial products are non-commutative operations. For both operations, the order of the factors of the products matters).

More significantly, as we explain using equations in the sequel, while G1⋉SG2 and G2□SG1 can have the same number of edges, G1⋉SG2 typically has less vertices than G2□SG1.

Using the same notation as that of Section 4, the number of vertices of a partial product graph G2□VpG1 is expressed by the equation

while the number of its edges is expressed by the equation

Note also that if multiedges were allowed for ⋉ we would have

and the order of G1⋉VpG2 will then be the same as that of G2□VpG1 (which, when multiedges are disallowed, happens only if Gn has no edges, i.e., when none of the vertices of Gn is connected to another vertex of Gn, sometimes called a discrete graph).

Further adding to the differences between ⋉ and □S, the main motivation for defining ⋉ is to apply it in modeling generic OO subtyping, while the motivation behind defining □S— as presented in [Yero2015, ]—seems to be a purely theoretical motivation, namely, studying Vizing’s conjecture (a famous conjecture in graph theory, relating the domination number of a product graph to the domination number of its factors).

This situation, in our opinion, is due to these models and the mathematical foundations they build upon distancing themselves (unnecessarily) from the nominal-typing of generic OOP languages and, accordingly, them being unware of the far-reaching implications nominal-typing has on the type systems of these languages and on analyzing and understanding them, which—again, in our opinion—includes analyzing and understanding generics and generic variance annotations (of which wildcard types are instances).

In brief, with some simplifying assumptions that we detail in [AbdelGawad2017a, ; AbdelGawad2018b, ], the generic subtyping relation in Java can be constructed iteratively using the nominal subclassing relation and the partial Cartesian graph product ⋉, as follows.

Figure 5 illustrates the use of ⋉ to construct the Java subtyping relation. To decrease clutter, given that OO subtyping is a transitive relation, we present the transitive reduction of the subtyping graphs in Figure 5.

As defined by Equation (4), the graph of S2=C⋉{C}S△1 in Figure 5 is constructed as the partial product of the graph of the subclassing/inheritance relation C and the graph of S△1 (of wildcard types over S1, ordered by containment) relative to the set {C} of generic classes in C.

More details and examples on the use of ⋉ to construct the generic OO subtyping relation can be found in [AbdelGawad2018b, ; AbdelGawad2018c, ].

In this paper we defined a new binary operation ⋉ on graphs that constructs a partial product of its two input graphs, we presented few examples that illustrate the definition of ⋉, and we discussed some of the basic properties of the operation. We also compared the ⋉ operation to the closest similar work. Finally, we also discussed how the partial graph product operation ⋉ may be used in understanding the subtyping relation in generic nominally-typed OO programming languages.

As of the time of this writing, we do not know of any other application of the new graph operation we present. Nevertheless, in this paper we presented the partial product operation over graphs in abstract mathematical terms, in the hope that the operation may prove to be useful in other mathematical contexts and domains.

Although we have not done so here, we believe the notion of partial Cartesian graph products, as presented here, can be easily adapted to apply to other mathematical notions such as sets, partial orders, groups (or even categories, more generally). To model infinite self-similar graphs (or groups or categories) we also believe partial products, over graphs, groups, or categories, can in some way be modeled by operads, which are category-theoretic tools that have proved to be useful in modeling self-similar phenomena [spivak2014category, ; AbdelGawad2017a, ].

Finally, studying in more depth properties of partial Cartesian graph products such as the size, order (as we hinted at in Section 5) and rank of elements of the products and of infinite applications of them, is work that can build on work we presented in this paper, and which can be of both theoretical and practical significance, particularly in computer science graph theoretic applications. Also, we believe a notion of ‘degree of partialness’ of a partial product graph999For example, the degree of partialness can be a value (a real number) between 0 and 1, defined possibly as the size of the set of product vertices, |Vp|, divided by size of the set of all vertices of the first factor graph, |V1| (i.e., the degree of partialness of a partial product will be |Vp|/|V1|. In this case a degree of partialness with value 1 means the standard Cartesian product, while a value of 0 means no product.) can be a useful notion, even though we do not immediately see an application of this notion.

To generate the graph examples presented in this paper we implemented the definition of ⋉ (as presented in Section 2) in SageMath 8.1 [Stein2017, ]. For those interested, we present in this appendix our SageMath implementation code. The code presented here is not optimized for speed of execution but rather for clarity and simplicity of implementation.

For convenience, our initial shorter (but equivalent) implementation code for ⋉ (where GSP stands for ‘Generic Subtyping Product’) is as follows. The code corresponds to the second informal view of the partial Cartesian graph product we presented in Section 2.

For any two graphs g1, g2 and any list pv (listing the product vertices subset of the vertices of g1) we have