Parametric unfolding of a true distribution distorted due to finite resolution and limited efficiency for the registration of individual events is discussed. Details of the computational algorithm of the unfolding procedure are presented. 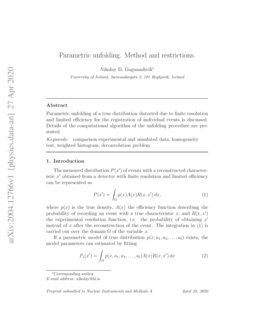 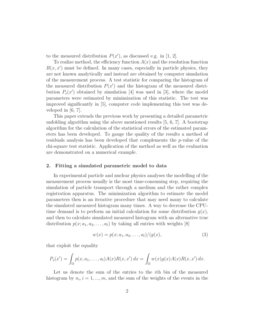 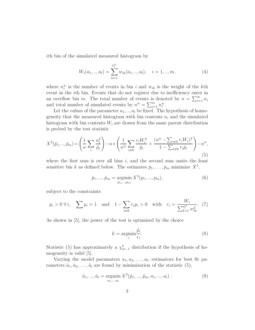 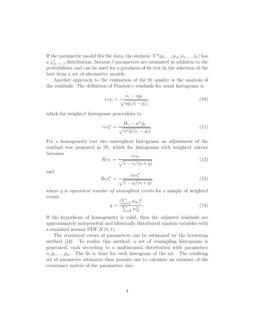 On wavelets to select the parametric form of a regression model

x, and R(x,x′) the experimental resolution function, i.e. the probability of obtaining x′ instead of x after the reconstruction of the event. The integration in (1) is carried out over the domain Ω of the variable x.

If a parametric model of true distribution

exists, the model parameters can estimated by fitting

to the measured distribution P(x′), as discussed e.g. in zhigunov ; zechebook .

To realize method, the efficiency function A(x) and the resolution function R(x,x′)

must be defined. In many cases, especially in particle physics, they are not known analytically and instead are obtained by computer simulation of the measurement process. A test statistic for comparing the histogram of the measured distribution

P(x′) and the histogram of the measured distribution Ps(x′) obtained by simulation gagu_comp was used in gagu_f , where the model parameters were estimated by minimization of this statistic. The test was improved significantly in chicom , computer code implementing this test was developed in prev ; prev2 .

This paper extends the previous work by presenting a detailed parametric unfolding algorithm using the above mentioned results chicom ; prev ; prev2 . A bootstrap algorithm for the calculation of the statistical errors of the estimated parameters has been developed. To gauge the quality of the results a method of residuals analysis has been developed that complements the p-value of the chi-square test statistic. Application of the method as well as the evaluation are demonstrated on a numerical example.

In experimental particle and nuclear physics analyses the modelling of the measurement process usually is the most time-consuming step, requiring the simulation of particle transport through a medium and the rather complex registration apparatus. The minimization algorithm to estimate the model parameters then is an iterative procedure that may need many to calculate the simulated measured histogram many times. A way to decrease the CPU-time demand is to perform an initial calculation for some distribution g(x), and then to calculate simulated measured histogram with an alternative true distribution p(x;a1,a2,…,al) by taking all entries with weights sobol

that exploit the equality

where the first sum is over all bins i, and the second sum omits the least sensitive bin k as defined below. The estimates ^p1,…,^pm minimize X2,

As shown in chicom , the power of the test is optimized by the choice

Statistic (5) has approximately a χ2m−1 distribution if the hypothesis of homogeneity is valid chicom .

Varying the model paramaters a1,a2,…,al, estimators for best fit parameters ^a1,^a2,…,^al are found by minimization of the statistic (5),

If the parametric model fits the data, the statistic X2(^p1,...,^pm,^a1,...,^al) has a χ2m−1−l distribution, because l parameters are estimated in addition to the probabilities and can be used for a goodness-of-fit test in the selection of the best from a set of alternative models.

Another approach to the evaluation of the fit quality is the analysis of the residuals. The definition of Pearson’s residuals for usual histograms is

which for weighted histograms generalizes to

For a homogeneity test two unweighted histograms an adjustment of the residual was proposed in haberman , which for histograms with weighted entries becomes

If the hypothesis of homogeneity is valid, then the adjusted residuals are approximately independent and identically distributed random variables with a standard normal PDF

The statistical errors of parameters can be estimated by the bootstrap method efron . To realize this method, a set of resampling histograms is generated, each according to a multinomial distribution with parameters n,^p1,...,^pm. The fit is done for each histogram of the set. The resulting set of parameter estimates then permits one to calculate an estimate of the covariance matrix of the parameters also.

Starting from a true PDF to be of the form

and a gaussian resolution function

A simulation of 10 000 events generated according to P(x′) was done (see algorithm in jinst ) and is presented as a histogram with 77 bins in Figure 1.

The result Ps(x′) from simulating 1 000 000 events according to the algorithm described in jinst is shown in Figure 2 together with the initial distribution g(x).

As a fit-model for the true distribution the following function with five free parameters was chosen,

In the fit event weights w(x)=p(x,a1,a2,b1,b2,p0)/g(x) were used according to the formula (3). The test statistic for X2(^p1,..,^p78) for a fixed set of parameters a1,a2,b1,b2,p0 was calculated with methods and codes published in chicom ; prev ; prev2 . The parameter variations were driven by the SIMPLEX algorithm of the package MINUIT minuit in order to determine the best fit parameters by minimizing X2(^p1,...,^p78,^a1,^a2,^b1,^b2,^p0). Figure 3 shows unfolded distribution compared to the true PDF. Figure 4 shows the weighted histogram with the optimal values of parameters in comparison with the histogram representing the measured events.

The bootstrap method, with the resample size equal to 1000, was used for estimating error intervals and correlation matrix of the fit parameters. To resample the measured histogram, bins contents were generated as multinomial random numbers cern with parameter n=10000 and probabilities ^p1,...,^p78. Assignment of central value and estimate of the statistical errors of particular parameter, for example a1, is done based on the ordered list of bootstrap estimates

where the number in parentheses shows the location when sorting in ascending order.

Starting from the smallast size 68% confidence interval for

^a1, with lower and upper limit estimated by

A graphical analysis of residuals was done to evaluate the result of then fitting procedure. Figure 5 shows the distribution of the residuals, where a Kolmogorov-Smirnov test of normality gives p-value of p=0.498

. Figure 5 shows quantile-quantile plot of residuals with the 95% confidence band

qq . Figures 3,4,5,6 illustrate the potential of the parametric unfolding method, with very satisfactory p-values for the test statistis considered.

4 Evaluation of the method

Finally, the simulation study was done for different values of the resolution parameter σ. Results are presented in Table 4, showing how the accuracy of the parameter estimates diminishes with the worsening of the detector resolution. The fits were done without constraints for the values of the parameters. The study indicates that for larger resolution parameters eventually constraints will be needed to obtain stable results.

Parametric unfolding of data measured by a detector with finite resolution and limited efficiency is presented. The method is developed as an application of an improved test for comparing weighted histograms and incorporates new computational algorithms and codes. The bootstrap method is employed to estimation the errors of the fit parameters. Residual analysis generalized for weighted histograms has been developed to gauge the quality of the unfolding result. A numerical example is given to illustrate the method, and an extensive simulation study was done to confirm that the proposed method as a whole is valid.

The author is grateful to Michael Schmeling (Max Plank institute for Nuclear Physics) for critical reading of the manuscript and comments and to Hjörleifur Sveinbjörnsson and Helmut Neukirchen (University of Iceland) for their help and support of this work. This research was funded by the University of Iceland Research Fund (HI17080029).