Multivariate count data are defined as the number of items of different categories issued from sampling within a population, which individuals are grouped into categories. The analysis of multivariate count data is a recurrent and crucial issue in numerous modelling problems, particularly in the fields of biology and ecology (where the data can represent, for example, children counts associated with multitype branching processes), sociology and econometrics. We focus on I) Identifying categories that appear simultaneously, or on the contrary that are mutually exclusive. This is achieved by identifying conditional independence relationships between the variables; II)Building parsimonious parametric models consistent with these relationships; III) Characterising and testing the effects of covariates on the joint distribution of the counts. To achieve these goals, we propose an approach based on graphical probabilistic models, and more specifically partially directed acyclic graphs. 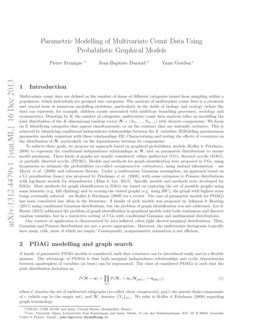 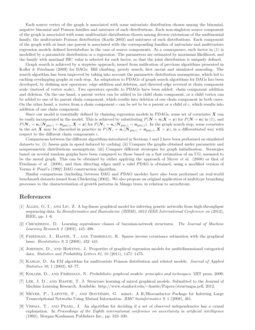 Graphical modelling has a long history in statistics as a tool for the a...
Marco Scutari, et al. ∙

N=(N0,…,NK−1) with discrete components. We focus on I) Identifying categories that appear simultaneously, or on the contrary that are mutually exclusive. This is achieved by identifying conditional independence relationships between the K variables; II)Building parsimonious parametric models consistent with these relationships; III) Characterising and testing the effects of covariates on the distribution of N, particularly on the dependencies between its components.

To achieve these goals, we propose an approach based on graphical probabilistic models (Koller & Friedman, 2009) to represent the conditional independence relationships in N

, and on parametric distributions to ensure model parsimony. Three kinds of graphs are usually considered: either undirected (UG), directed acyclic (DAG), or partially directed acyclic (PDAG). Models and methods for graph identification were proposed in UGs, using frequencies to estimate the probabilities (so-called

(2008), with some extension to Poisson distributions with log-linear models for dependencies (Allen & Liu, 2012). Specific models and methods were developed for DAGs. Most methods for graph identification in DAGs are based on exploring the set of possible graphs using some heuristic (e.g. hill climbing) and by scoring the visited graphs (e.g. using BIC), the graph with highest score being eventually selected – see Koller & Friedman (2009) for a review. The case of parametric models for PDAGs has been considered less often in the literature. A family of such models was proposed by Johnson & Hoeting (2011) using conditional Gaussian distributions, but the problem of graph identification was not addressed. Lee & Hastie (2012) addressed the problem of graph identification in graphical models with both continuous and discrete random variables, but in a restrictive setting of UGs with conditional Gaussian and multinomial distributions.

Our context of application is characterised by zero-inflated, often right skewed marginal distributions. Thus, Gaussian and Poisson distributions are not

a priori appropriate. Moreover, the multivariate histograms typically have many cells, most of which are empty. Consequently, nonparametric estimation is not efficient.

A family of parametric PDAG models is considered, such that covariates can be introduced easily and in a flexible manner. The advantage of PDAGs is that both marginal independence relationships and cyclic dependencies between quadruplets of variables (at least) can be represented. The class of considered PDAGs is such that the joint distribution factorises as

where C denotes the set of undirected subgraphs (so-called chain components), pa(c) the parent chain components of c (which can be the empty set), and Nc denotes {Nj}j∈c. We refer to Koller & Friedman (2009) regarding graph terminology.

Graph search is achieved by a stepwise approach, issued from unification of previous algorithms presented in Koller & Friedman (2009) for DAGs: Hill climbing, greedy search, first ascent and simulated annealing. The search algorithm has been improved by taking into account the parametric distribution assumptions, which led to caching overlapping graphs at each step. An adaptation to PDAGs of graph search algorithms for DAGs has been developed, by defining new operators: edge addition and deletion, and directed edge reversal at chain component scale (instead of vertex scale). Two operators specific to PDAGs have been added: chain component addition and deletion. On the one hand, a parent vertex can be added to its child chain component, or a child vertex can be added to one of its parent chain component, which results into deletion of one chain component in both cases. On the other hand, a vertex from a chain component c can be set to be a parent or a child of c, which results into addition of one chain component.

Comparisons between the different algorithms introduced in Sections 1 and 2 have been performed on simulated datasets to: (i) Assess gain in speed induced by caching; (ii) Compare the graphs obtained under parametric and nonparametric distributions assumptions; (iii) Compare different strategies for graph initialisation. Strategies based on several random graphs have been compared to those based on a fast estimation of an UG, assumed to be the moral graph. This can be obtained by either applying the approach of Meyer et al. (2008) or that of Friedman et al. (2008), and then directing edges until a valid PDAG is obtained, using a modified version of Verma & Pearl’s (1992) DAG construction algorithm.

Similar comparisons (including between DAG and PDAG models) have also been performed on real-world benchmark datasets issued from Chickering (2002). We also propose an original application of multitype branching processes to the characterisation of growth patterns in Mango trees, in relation to asynchrony.