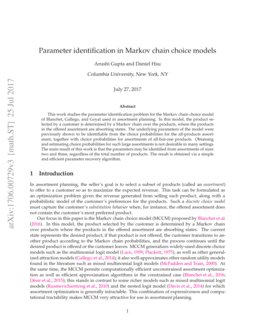 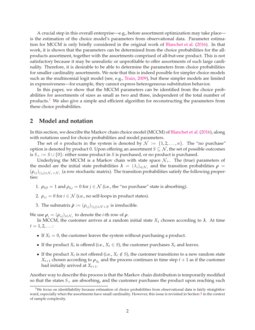 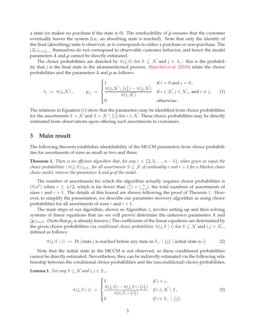 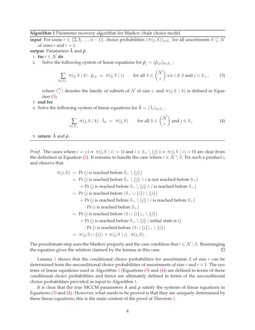 In assortment planning, the seller’s goal is to select a subset of products (called an assortment) to offer to a customer so as to maximize the expected revenue. This task can be formulated as an optimization problem given the revenue generated from selling each product, along with a probabilistic model of the customer’s preferences for the products. Such a discrete choice model must capture the customer’s substitution behavior when, for instance, the offered assortment does not contain the customer’s most preferred product.

Our focus in this paper is the Markov chain choice model (MCCM) proposed by Blanchet et al. (2016)

. In this model, the product selected by the customer is determined by a Markov chain over products where the products in the offered assortment are absorbing states. The current state represents the desired product; if that product is not offered, the customer transitions to another product according to the Markov chain probabilities, and the process continues until the desired product is offered or the customer leaves. MCCM generalizes widely-used discrete choice models such as the multinomial logit model

(Luce, 1959; Plackett, 1975), as well as other generalized attraction models (Gallego et al., 2014); it also well-approximates other random utility models found in the literature such as mixed multinomial logit models (McFadden and Train, 2000). At the same time, the MCCM permits computationally efficient unconstrained assortment optimization as well as efficient approximation algorithms in the constrained case (Blanchet et al., 2016; Désir et al., 2015); this stands in contrast to some richer models such as mixed multinomial logit models (Rusmevichientong et al., 2010) and the nested logit model (Davis et al., 2014) for which assortment optimization is generally intractable. This combination of expressiveness and computational tractability makes MCCM very attractive for use in assortment planning.

A crucial step in this overall enterprise—e.g., before assortment optimization may take place—is the estimation of the choice model’s parameters from observational data. Parameter estimation for MCCM is only briefly considered in the original work of Blanchet et al. (2016). In that work, it is shown that the parameters can be determined from the choice probabilities for the all-products assortment, together with the assortments comprised of all-but-one product. This is not satisfactory because it may be unrealistic or unprofitable to offer assortments of such large cardinality. Therefore, it is desirable to be able to determine the parameters from choice probabilities for smaller cardinality assortments. We note that this is indeed possible for simpler choice models such as the multinomial logit model (see, e.g., Train, 2009), but these simpler models are limited in expressiveness—for example, they cannot express heterogeneous substitution behavior.

In this section, we describe the Markov chain choice model (MCCM) of Blanchet et al. (2016), along with notations used for choice probabilities and model parameters.

The set of n products in the system is denoted by N:={1,2,…,n}. The “no purchase” option is denoted by product 0. Upon offering an assortment S⊆N, the set of possible outcomes is S+:=S∪{0}: either some product in S is purchased, or no product is purchased.

Underlying the MCCM is a Markov chain with state space N+. The (true) parameters of the model are the initial state probabilities λ=(λi)i∈N+ and the transition probabilities ρ=(ρi,j)(i,j)∈N+×N+

In MCCM, the customer arrives at a random initial state X1 chosen according to λ. At time t=1,2,…:

Another way to describe this process is that the Markov chain distribution is temporarily modified so that the states S+ are absorbing, and the customer purchases the product upon reaching such a state (or makes no purchase if the state is 0). The irreducibility of ~ρ ensures that the customer eventually leaves the system (i.e., an absorbing state is reached). Note that only the identity of the final (absorbing) state is observed, as it corresponds to either a purchase or non-purchase. The (Xt)t=1,2,…, themselves do not correspond to observable customer behavior, and hence the model parameters λ and ρ cannot be directly estimated.

The following theorem establishes identifiability of the MCCM parameters from choice probabilities for assortments of sizes as small as two and three.

There is an efficient algorithm that, for any r∈{2,3,…,n−1}, when given as input the choice probabilities (π(j,S))j∈S+ for all assortments S⊆N of cardinality r and r+1 for a Markov chain choice model, returns the parameters λ and ρ of the model.

The main steps of our algorithm, shown as Algorithm 1, involve setting up and then solving systems of linear equations that (as we will prove) determine the unknown parameters λ and (ρi)i∈N. (Note that ρ0 is already known.) The coefficients of the linear equations are determined by the given choice probabilities via conditional choice probabilities π(j,S∣i) for S⊆N and i,j∈N+, defined as follows:

The penultimate step uses the Markov property and the case condition that i∈N∖S. Rearranging the equation gives the relation claimed by the lemma in this case. ∎

It is clear that the true MCCM parameters λ and ρ satisfy the systems of linear equations in Equations (3) and (4). However, what needs to be proved is that they are uniquely determined by these linear equations; this is the main content of the proof of Theorem 1.

In this section, we give the proof of Theorem 1.

4.1 The case without the “no purchase” option

For sake of clarity, we first give the proof in the case where the “no purchase” option is absent. This can be regarded as the special case where λ0=0 and ρi,0=0 for all i∈N. So here we just regard λ=(λj)j∈N and each ρi=(ρi,j)j∈N

as probability distributions on

N. The general case will easily follow from the same arguments with minor modification.

We make use of the following result about M-matrices, i.e., the class of matrices A that can be expressed as A=sI−B for some s>0 and non-negative matrix B with spectral radius at most s. (Here, I

denotes the identity matrix of appropriate dimensions.) In particular, the matrix

If A∈Rp×p is an irreducible M-matrix (possibly singular), then every principal submatrix222Recall that a principal submatrix of a p×p matrix A is a submatrix obtained by removing from A the rows and columns indexed by some set I⊆[p]. of A, other than A itself, is non-singular. If A is also singular, then it has rank p−1.

4.1.2 Rank of linear equations from a single assortment

We begin by characterizing the space spanned by {hj,S:j∈S} for a fixed S∈(Nr). We claim, by Lemma 1, that the vectors in {hj,S:j∈S} are linearly independent. Indeed, if this collection of vectors is arranged in a matrix [hj,S:j∈S], then the submatrix obtained by selecting rows corresponding to j∈S is the S×S identity matrix. Thus we have proved

Note that in the case r=n−1, we are done. But when r<n−1, the linear equations given by the {hj,S:j∈S} may not uniquely determine the ρi for i∈N∖S. To overcome this, we need to be able to combine linear equations derived from multiple assortments. However, for a sum of subspaces V and W,

For each i∈N, let ai denote the i-th row of the matrix A:=I−ρ (which is an M-matrix). That is, ai:=ei−ρi, where ei is the i-th coordinate basis vector. Recall that if i∈N∖S, then ρi satisfies Equation (3). This fact can be written in our new notation as

Now consider two assortments S and S′, and the intersection of their respective subspaces. It follows from Lemma 4 that

This orthogonality is the key to lower-bounding the dimension of the sum of these subspaces, which we capture in the following general lemma.

To determine dim(W), observe that W is the span of rows of certain rows of the M-matrix A. By Lemma 2, the principal submatrix of A corresponding to N∖(S0∩S′) is either non-singular (when S0∩S′≠∅) or is A itself; in either case, it has rank n−max{1,|S0∩S′|}. Hence,

as well. Combining the dimension formula with the last two equation displays gives

We now choose a collection of assortments and argue, via Lemma 3 and Lemma 5, that they define linear equations of sufficiently high rank. Specifically, for each i∈N, we need a collection S⊂(Nr) such that each S∈S does not contain i, and

These assortments do not contain i, they have the common intersection S∩, with |S∩|=r−1, and there are n−r assortments in total. So by Lemma 6, the collection S satisfies the dimension bound in Equation (6).

As was already argued in the proof strategy, this suffices to establish the uniqueness of the ρi and λ as solutions to the respective systems of linear equations in Equation (3) and Equation (4).

This concludes the proof of Theorem 1 without the “no purchase” option. ∎

4.2 The general case with the “no purchase” option

Because the indexing starts at 0, we still define ai to be the i-th row of A=I−ρ, so ai=ei−ρi. (In particular, a0 is the all-zeros vector.)

With these definitions, we have the following analogue of Lemma 3 and Lemma 4:

Here, the key difference is that the dimension is r+1, rather than just r.

We now establish an analogue of Lemma 5 (which is typographically nearly identical).

We now use the fact that I−~ρ, which is a submatrix of A, is an irreducible M-matrix. By Lemma 2, the principal submatrix of A corresponding to N∖(S0∩S′) is either non-singular (when S0∩S′≠∅) or is I−~ρ; in either case, it has rank n−max{1,|S0∩S′|}. So we have

Finishing the proof as in Lemma 5, we have

where the second inequality uses Lemma 7 (instead of Lemma 3). ∎

The choice of assortments demonstrating the subspace of required dimension is the same as before, except now we show that the dimension is at least n. Again, fix some i∈N, and choose the collection of n−r assortments S⊆(Nr) as before (described in and directly before Equation (7)). Following the inductive argument in the proof of Lemma 6, but now using Lemma 7 and Lemma 8 (instead of Lemma 3 and Lemma 5), we have

This concludes the proof of Theorem 1. ∎

We now show that the number of assortments for which we need the choice probabilities is O(n2) for r≤n/2. Indeed, the construction given above based on Lemma 6 can be used to avoid using all assortments of size r (and r+1) in Algorithm 1.

Our main result establishes the identifiability of MCCM parameters from choice probabilities for assortments of sizes different from n−1 and n. This is important because real systems often have cardinality constraints on the assortment sizes. While such constraints are typically considered in the context of assortment optimization (see, e.g., Désir et al., 2015), it is also important in the context of parameter estimation.

One complication of using small size assortments to estimate the MCCM parameters is that the number of different assortments required may be as large as O(n2). In contrast, only n+1 assortments are needed when the sizes are n−1 and n. On the other hand, the statistical difficulty of estimating choice probabilities for large assortments may be higher than the same task for smaller assortments. So the possible trade-offs in sample complexity is not straightforward from this analysis. This is an interesting question that we leave to future work.

We are grateful to Shipra Agrawal and Vineet Goyal for helpful discussions, and to Vineet for originally suggesting this problem. This work was supported in part by NSF awards DMR-1534910 and IIS-1563785, a Bloomberg Data Science Research Grant, a Sloan Research Fellowship, and the Research Opportunities and Approaches to Data Science (ROADS) grant from the Data Science Institute at Columbia University.