Convolutional Neural Networks (CNNs) can be shifted across 2D images or 3D videos to segment them. They have a fixed input size and typically perceive only small local contexts of the pixels to be classified as foreground or background. In contrast, Multi-Dimensional Recurrent NNs (MD-RNNs) can perceive the entire spatio-temporal context of each pixel in a few sweeps through all pixels, especially when the RNN is a Long Short-Term Memory (LSTM). Despite these theoretical advantages, however, unlike CNNs, previous MD-LSTM variants were hard to parallelize on GPUs. Here we re-arrange the traditional cuboid order of computations in MD-LSTM in pyramidal fashion. The resulting PyraMiD-LSTM is easy to parallelize, especially for 3D data such as stacks of brain slice images. PyraMiD-LSTM achieved best known pixel-wise brain image segmentation results on MRBrainS13 (and competitive results on EM-ISBI12). 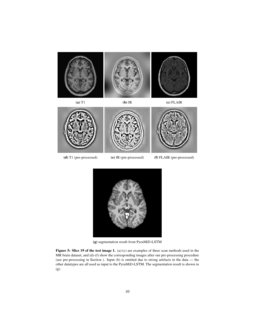 Multi-Dimensional LSTM networks (MD-LSTM [DBLP:conf/icann/GravesFS07]) connect hidden LSTM units in grid-like fashion111For example, in two dimensions this yields 4 directions; up, down, left and right.. Two dimensional MD-LSTM is applicable to image segmentation [DBLP:conf/icann/GravesFS07, graves:2009nips, byeon15] where each pixel is assigned to a class such as background or foreground. Each LSTM unit sees a pixel and receives input from neighboring LSTM units, thus recursively gathering information about all other pixels in the image.

[Wang15] and Convolutional Neural Networks [ciresan2012nips]. 3D-LSTM, however, can process the full context of each pixel in such a volume through 8 sweeps over all pixels by 8 different LSTMs, each sweep in the general direction of one of the 8 directed volume diagonals.

Due to the sequential nature of RNNs, however, MD-LSTM parallelization was difficult, especially for volumetric data. The novel Pyramidal Multi-Dimensional LSTM (PyraMiD-LSTM) networks introduced in this paper use a rather different topology and update strategy. They are easier to parallelize, need fewer computations overall, and scale well on GPU architectures.

We will first describe standard one-dimensional LSTM [Gers:99c] and MD-LSTM. Then we introduce topology changes to construct the PyraMiD-LSTM, which is formally described and discussed.

The original LSTM unit consists of an input gate (i), forget gate222Although the forget gate output is inverted and actually ‘remembers’ when it is on, and forgets when it is off, the traditional nomenclature is kept. (f), output gate (o), and memory cell (c

) which control what should be remembered or forgotten over potentially long periods of time. All gates and activations are real-valued vectors:

x,i,f,~c,c,o,h∈RT, where T is the length of the input. The gates and activations at discrete time t (t=1,2,…) are computed as follows:

where (⋅) is a matrix multiplication, (⊙) an element-wise multiplication, and θ denotes the weights. ~c is the input to the ’cell’ c, which is gated by the input gate, and h is the output. The non-linear functions σ and tanh are applied element-wise, where σ(x)=11+e−x. Equations (1, 2) determine gate activations, Equation (3) cell inputs, Equation (4) the new cell states (here ‘memories’ are stored or forgotten), Equation (5) output gate activations which appear in Equation (6), the final output.

If the connections are rotated by 45∘, all inputs to all units come from either left, right, up, or down (left in case of Figure 1–b). This greatly facilitates parallelization, since all the elements of a whole grid row can be computed independently, which does not work for MD-LSTM simplexes, whose sizes vary. However, this introduces context gaps as in Figure 1–b. By adding an extra input, these gaps are filled as in Figure 1–c.

A similar connection strategy has been previously used to speed up non-euclidian distance computations on surfaces [weber2008parallel]. There are however important differences:

Each C-LSTM performs computations in a plane moving in the defined direction. The symbol (⋅) in a dimension signifies that the plane is parallel to this axis, and a 1 or −1 implies that the computation is moving along the positive or negative direction of that axis, respectively. The input is x∈RW×H×D×C, where W is the width, H the height, D the depth, and C the number of channels of the input, or hidden units in the case of second- and higher layers. Similarly, we define the volumes fd,id,od,~cd,cd,hd,h∈RW×H×D×O, where d∈D is a direction and O is the number of hidden units (per pixel). Since each direction needs a separate volume, we denote volumes with (⋅)d.

To keep the equations readable, we omit the time index below: ht becomes h and ht−1 becomes h\scalebox0.75[1.0]−1. The time index t is bound to the axis along which computations are performed. For instance, for direction d=(⋅,⋅,1), vd refers to the plane orthogonal to axis z; i.e. vx,y,z,c for x=1..X,y=1..Y,c=1..C, and z=t. For a negative direction d=(⋅,⋅,−1), the plane is the same but moves in the opposite direction: z=Z−t. Furthermore, vd\scalebox0.75[1.0]−1 refers to the previous plane, in this case vx,y,z,c for x=1..X,y=1..Y,c=1..C,z=t−1. A special case is the first plane in each direction, which does not have a previous plane, hence we omit the corresponding computation. The following functions are defined for all planes and all directions:

where (∗) is a RNN-tailored convolution333

In 3D volumes, convolutions are performed in 2D; in general an n-D volume requires n-1-D convolutions. All convolutions have stride 1, and their filter sizes should at least be

3×3 in each dimension to create the full context., and h is the output of the layer. Note that in C-LSTMs the convolution operations propagate information ‘sideways’ over the axis of the data. This is very different from CNNs where the convolution operations propagate information upwards to the next layer. All biases are the same for all LSTM units (i.e., no positional biases are used). The outputs hd for all directions are added, combining all C-LSTMs into one PyraMiD-LSTM:

[isbi12]. Two stacks consist of 30 slices of 512×512 pixels obtained from a 2×2× 1.5μm3 microcube with a resolution of 4×4×50 nm3/pixel and binary labels. One stack is used for training, the other for testing. Target data consists of binary labels (membrane and non-membrane).

The full dataset requires more than the 12 GB of memory provided by our GPU, hence we train and test on sub-volumes. We randomly pick a position in the full data and extract a smaller cube (see the details in Bootstrapping). This cube is possibly rotated at a random angle over some axis and can be flipped over any axis. For EM images, we rotate over the z-axis and flipped sub-volumes with 50% chance along x, y, and z axes. For MR brain images, rotation is disabled; only flipping along the x direction is considered, since brains are (mostly) symmetric in this direction.

During test-time, rotations and flipping are disabled and the results of all sub-volumes are stitched together using a Gaussian kernel, providing the final result.

We normalize each input slice towards a mean of zero and variance of one, since the imaging methods sometimes yield large variability in contrast and brightness. We do not apply the complex pre-processing common in biomedical image segmentation

We apply simple pre-processing on the three datatypes of the MR Brain dataset, since they contain large brightness changes under the same label (even within one slice; see Figure 5). From all slices we subtract the Gaussian smoothed images (filter size: 31×31, σ=5.0), then a Contrast-Limited Adaptive Histogram Equalization (CLAHE) [Pizer87] is applied to enhance the local contrast (tile size: 16×16, contrast limit: 2.0). An example of the images after pre-processing is shown in Figure 5. The original and pre-processed images are all used, except the original IR images (Figure 4(b)), which have high variability.

. The following equations hold for every epoch:

where y∗ is the target, y is the output from the networks, E is the squared loss, MSE a running average of the variance of the gradient, ∇2 is the element-wise squared gradient, G the normalized gradient, M the smoothed gradient, and θ the weights. This results in normalized gradients of similar size for all weights, such that even weights with small gradients get updated. This also helps to deal with vanishing gradients [Hochreiter:91].

All experiments are performed on a desktop computer with an NVIDIA GTX TITAN X 12GB GPU. For GPU implementation, the NVIDIA CUDA Deep Neural Network library (cuDNN) [cudnn14] is used. On the MR brain dataset, training took around three days, and testing per volume took around 2 minutes.

. The total number of weights is 10,751,549, and all weights are initialized according to a uniform distribution:

Membrane segmentation is evaluated through an online system provided by the ISBI 2012 organizers. Comparisons to other methods are reported in Table 1. The teams IDSIA and DIVE provide membrane probability maps for each pixel, like our method. These maps are adapted by the post-processing technique of the teams SCI [Liu14], which directly optimizes the rand error (DIVE-SCI (top-1) and IDSIA-SCI (top-2)); this is most important in this particular segmentation task. Without post-processing, PyraMiD-LSTM networks outperform other methods in rand error, and are competitive in wrapping and pixel errors. Of course, performance could be further improved by applying post-processing techniques. Figure 4 shows an example segmentation result.

The results are compared based on the following three measures:

MR brain image segmentation results are evaluated by the ISBI NEATBrain15 organizers [MICCAI15] who provided the extensive comparison to other approaches on http://mrbrains13.isi.uu.nl/results.php. Table 2

compares our results to those of the top five teams. The organizers compute nine measures in total and rank all teams for each of them separately. These ranks are then summed per team, determining the final ranking (ties are broken using the standard deviation). PyraMiD-LSTM leads the final ranking with a new state-of-the-art result and outperforms other methods for CFS in all metrics.

We also tried regularization through dropout [srivastava14]. Following earlier work [dropout14], the dropout operator is applied only to non-recurrent connections (50% dropout on fully connected layers and/or 20% on input layer). However, this did not improve performance, but made the system slower.

[ciresan:2011ijcnn, Krizhevsky:2012, zeiler2013] and segmentation contests ciresan2012nips. MD-LSTM, however, may pose a serious challenge to such CNNs, at least for segmentation tasks. Unlike CNNs, MD-LSTM has an elegant recursive way of taking each pixel’s entire spatio-temporal context into account, in both images and videos. Previous MD-LSTM implementations, however, could not exploit the parallelism of modern GPU hardware. This has changed through our work presented here. Although our novel highly parallel PyraMiD-LSTM has already achieved state-of-the-art segmentation results in challenging benchmarks, we feel we have only scratched the surface of what will become possible with such PyraMiD-LSTM and other MD-RNNs.

We would like to thank Klaus Greff and Alessandro Giusti for their valuable discussions, and Jan Koutnik and Dan Ciresan for their useful feedback. We also thank the ISBI NEATBrain15 organizers [MICCAI15] and the ISBI 2012 organisers, in particular Adriënne Mendrik and Ignacio Arganda-Carreras. Lastly we thank NVIDIA for generously providing us with hardware to perform our research. This research was funded by the NASCENCE EU project (EU/FP7-ICT-317662).