This paper presents an efficient numerical algorithm for the simulation of pulse-width modulated power converters via parallelization in time domain. The method applies the multirate partial differential equation approach on the coarse grid of the (two-grid) parallel-in-time algorithm Parareal. Performance of the proposed approach is illustrated via its application to a DC-DC converter. 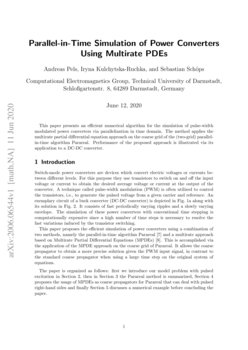 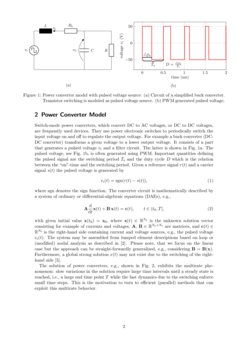 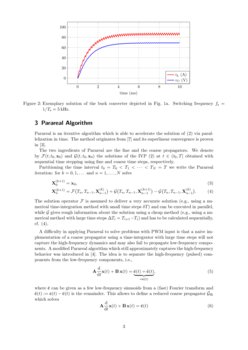 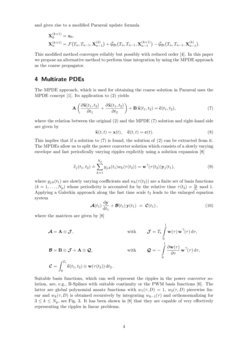 Switch-mode power converters are devices which convert electric voltages or currents between different levels. For this purpose they use transistors to switch on and off the input voltage or current to obtain the desired average voltage or current at the output of the converter. A technique called pulse-width modulation (PWM) is often utilized to control the transistors, i.e., to generate the pulsed voltage from a given carrier and reference. An exemplary circuit of a buck converter (DC-DC converter) is depicted in Fig. 0(a) along with its solution in Fig. 2. It consists of fast periodically varying ripples and a slowly varying envelope. The simulation of these power converters with conventional time stepping is computationally expensive since a high number of time steps is necessary to resolve the fast variations induced by the transistor switching.

This paper proposes the efficient simulation of power converters using a combination of two methods, namely the parallel-in-time algorithm Parareal [7] and a multirate approach based on Multirate Partial Differential Equations (MPDEs) [8]. This is accomplished via the application of the MPDE approach on the coarse grid of Parareal. It allows the coarse propagator to obtain a more precise solution given the PWM input signal, in contrast to the standard coarse propagator when using a large time step on the original system of equations.

The paper is organized as follows: first we introduce our model problem with pulsed excitation in Section 2, then in Section 3 the Parareal method is summarized, Section 4 proposes the usage of MPDEs as coarse propagators for Parareal that can deal with pulsed right-hand sides and finally Section 5 discusses a numerical example before concluding the paper.

Switch-mode power converters, which convert DC to AC voltages, or DC to DC voltages, are frequently used devices. They use power electronic switches to periodically switch the input voltage on and off to regulate the output voltage. For example a buck converter (DC-DC converter) transforms a given voltage to a lower output voltage. It consists of a part that generates a pulsed voltage vi and a filter circuit. The latter is shown in Fig. 0(a). The pulsed voltage, see Fig. 0(b), is often generated using PWM. Important quantities defining the pulsed signal are the switching period Ts and the duty cycle D which is the relation between the “on”-time and the switching period. Given a reference signal r(t) and a carrier signal s(t) the pulsed voltage is generated by

where sgn denotes the sign function. The converter circuit is mathematically described by a system of ordinary or differential-algebraic equations (DAEs), e.g.,

is the unknown solution vector consisting for example of currents and voltages,

A, B∈RNs×Ns are matrices, and c(t)∈RNs is the right-hand side containing current and voltage sources, e.g., the pulsed voltage vi(t). The system may be assembled from lumped element descriptions based on loop or (modified) nodal analysis as described in [2]. Please note, that we focus on the linear case but the approach can be straight-forwardly generalized, e.g., considering B=B(x). Furthermore, a global strong solution x(t) may not exist due to the switching of the right-hand side [5].

The solution of power converters, e.g., shown in Fig. 2, exhibits the multirate phenomenon: slow variations in the solution require large time intervals until a steady state is reached, i.e., a large end time point T while the fast dynamics due to the switching enforce small time steps. This is the motivation to turn to efficient (parallel) methods that can exploit this multirate behavior.

Parareal is an iterative algorithm which is able to accelerate the solution of (2) via parallelization in time. The method originates from [7] and its superlinear convergence is proven in [3].

The two ingredients of Parareal are the fine and the coarse propagators. We denote by F(t,t0,x0) and G(t,t0,x0) the solutions of the IVP (2) at t∈(t0,T] obtained with sequential time stepping using fine and coarse time steps, respectively.

~c(t):=c(t)−¯c(t) is the remainder. This allows to define a reduced coarse propagator ¯Gfft which solves

and gives rise to a modified Parareal update formula

This modified method converges reliably but possibly with reduced order [4]. In this paper we propose an alternative method to perform time integration by using the MPDE approach as the coarse propagator.

The MPDE approach, which is used for obtaining the coarse solution in Parareal uses the MPDE concept [1]. Its application to (2) yields

This implies that if a solution to (7) is found, the solution of (2) can be extracted from it. The MPDEs allow us to split the power converter solution which consists of a slowly varying envelope and fast periodically varying ripples explicitly using a solution expansion [8]

where yj,k(t1) are slowly varying coefficients and wk(τ(t2)) are a finite set of basis functions (k=1,…,Np) whose periodicity is accounted for by the relative time τ(t2)=t2Ts mod 1. Applying a Galerkin approach along the fast time scale t2 leads to the enlarged equation system

where the matrices are given by [8]

Suitable basis functions, which can well represent the ripples in the power converter solution, are, e.g., B-Splines with suitable continuity or the PWM basis functions [6]. The latter are global polynomial ansatz functions with w1(τ,D)=1, w2(τ,D) piecewise linear and wk(τ,D) is obtained recursively by integrating wk−1(τ) and orthonormalizing for 3≤k≤Np, see Fig. 3. It has been shown in [8] that they are capable of very effectively representing the ripples in linear problems.

Finally, equation (10) can be time-stepped along t1 by using much larger time steps than are needed to solve (2) since the fast variations are taken into account by the basis functions. The accuracy of the solution (reconstructed using (9)) increases with Np. However increasing Np also makes each time step of an implicit method more costly since an enlarged linear equation system has to be inverted. Nevertheless, even with very few basis functions the reconstructed solution can be expected to capture the main features of the exact solution. This motivates the introduction of another coarse propagator ¯Gmpde in Parareal which solves (10) and extracts afterwards the single-time solution according to (9). The resulting algorithm reads

The proposed approach is applied to the example of the buck converter (see Fig. 0(a)). Its circuit is described by the IVP (2) given by

First, the classical Pararel method (3)-(4) is applied to the original system (2) with the PWM input, where the implicit Euler time integration is used as the coarse propagator G. The method is then compared to two variants where G is changed to: 1.) ¯Gfft which solves system (6) containing only the DC component instead of the PWM signal on the right-hand side (modified Parareal [4]); 2.) ¯Gmpde which solves (2) using the MPDE approach with Np=1 and Np=3. The maximum relative error over the synchronization points Tn for n=1,…,N−1 obtained by the considered approaches is depicted in Fig. 4. The classical Parareal converged up to the relative tolerance of 10−6 in 9 iterations. This corresponds to 2700 and 360 sequential solutions of linear algebraic systems of size Ns=2 on the fine and the coarse levels, respectively, or 3060 linear systems in total. By the number of sequential solves we mean the number of solver calls which cannot be carried out in parallel (communication costs are neglected). The solution using the DC component and the MPDE approach with Np=1 both required 8 iterations (2400 fine and 320 coarse solves, or in total 2720 solutions of linear systems in 2 variables). Finally, the MPDE approach with Np=3 basis functions on the coarse level converged after 7 iterations, thereby solving 2100 linear systems of size Ns=2 on the fine level and 280 linear systems of size Ns×Np=6 on the coarse level.

Let us now assume that we have an optimal solver with linear complexity and that solving one linear system of size Ns=2 requires one unit of time. Then the classical Parareal requires 2700+1×360=3060, MPDE with Np=1 (as well as the DC-extraction) 2400+1×320=2720 and MPDE with Np=3 2100+3×280=2940 units of time. We see that, even in this optimal setting, the increased accuracy of the coarse solver, i.e, application of MPDE with Np=3, does not compensate for the increased effort due to the enlarged equations system.

Furthermore, from Fig. 4 we see that Parareal with coarse propagator ¯Gmpde using a constant basis function, i.e., Np=1 and the modified Parareal with ¯Gfft using only the DC excitation perform very similarly (if not identically). This resemblance is not surprising since the MPDE approach with Np=1 computes only the envelope of the solution, which is conceptually similar to the modified Parareal with a smooth (in this case constant) coarse input. Finally, we observe that exploitation of more basis functions (Np≥3) does not significantly improve the convergence of Parareal, they are similar to the case Np=3.

In this paper we introduced a novel parallel-in-time algorithm, able to treat systems excited by pulse-width modulated signals efficiently. The method extends the two-grid Parareal algorithm by exploiting the MPDE solution approach on the coarse grid. It was applied to the time-domain simulation of a buck converter supplied by a PWM voltage source. Comparison of the proposed algorithm to the standard Parareal method and to the Parareal with reduced coarse dynamics illustrated its faster convergence. Future research will further investigate the similarity of Parareal with the MPDE coarse solver and the modified Parareal as well as higher order MPDE approaches as coarse propagators.

The authors thank Ruth Vazquez Sabariego from KU Leuven for many fruitful discussions on the MPDE approach.

This research was supported by the Excellence Initiative of the German Federal and State Governments and the Graduate School of Computational Engineering at Technische Universität Darmstadt, as well as by DFG grant SCHO1562/1-2 and BMBF grant 05M2018RDA (PASIROM).