In 1999 Lyngsø and Pedersen proposed a conjecture stating that every binary circular word of length n with equal number of zeros and ones has an antipalindromic linear subsequence of length at least 2/3n. No progress over a trivial 1/2n bound has been achieved since then. We suggest a palindromic counterpart to this conjecture and provide a non-trivial infinite series of circular words which prove the upper bound of 2/3n for both conjectures at the same time. The construction also works for words over an alphabet of size k and gives rise to a generalization of the conjecture by Lyngsø and Pedersen. Moreover, we discuss some possible strengthenings and weakenings of the named conjectures. We also propose two similar conjectures for linear words and provide some evidences for them. 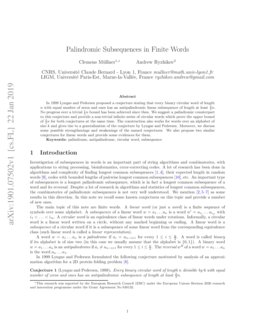 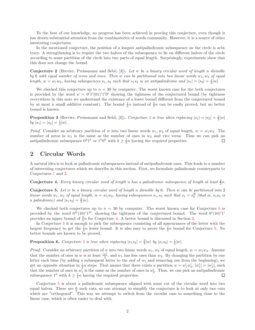 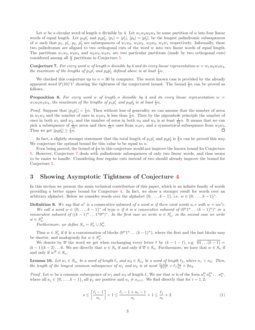 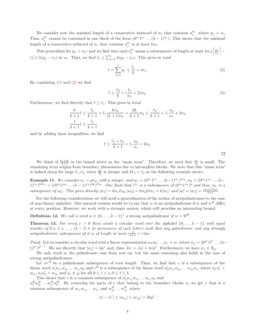 We construct an infinite word w over the 5-letter alphabet such that for...
Golnaz Badkobeh, et al. ∙

The prefix palindromic length PPL_u(n) of an infinite word u is the mini...
Anna E. Frid, et al. ∙

It is well-known that the circular flow number of a bridgeless cubic gra...
Jan Goedgebeur, et al. ∙

Genetic algorithms and the Andrews-Curtis conjecture

In 1999 Lyngsø and Pedersen formulated the following conjecture motivated by analysis of an approximation algorithm for a 2D protein folding problem [8].

Every binary circular word of length n divisible by 6 with equal number of zeros and ones has an antipalindromic subsequence of length at least 23n.

To the best of our knowledge, no progress has been achieved in proving this conjecture, even though it has drawn substantial attention from the combinatorics of words community. However, it is a source of other interesting conjectures.

Let w be a binary circular word of length n divisible by 6 with equal number of zeros and ones. Then w can be partitioned into two linear words w1,w2 of equal length, w=w1w2, having subsequences s1,s2 such that s1s2 is an antipalindrome and |s1|=|s2|=13|w|.

We checked this conjecture up to n=30 by computer. The worst known case for the both conjectures is provided by the word w=0i1i(01)i1i0i showing the tightness of the conjectured bound (by tightness everywhere in this note we understand the existence of a lower bound different from the conjectured bound by at most a small additive constant). The bound 12n instead of 23n can be easily proved, but no better bound is known.

Consider an arbitrary partition of w into two linear words w1,w2 of equal length, w=w1w2. The number of zeros in w1 is the same as the number of ones in w2 and vice versa. Thus we can pick an antipalindromic subsequence 0k1k or 1k0k with k≥14n having the required properties. ∎

A natural idea is to look at palindromic subsequences instead of antipalindromic ones. This leads to a number of interesting conjectures which we describe in this section. First, we formulate palindromic counterparts to Conjectures 1 and 2.

Every binary circular word of length n has a palindromic subsequence of length at least 23n.

We checked both conjectures up to n=30 by computer. The worst known case for Conjecture 5 is provided by the word 02i(10)i12i, showing the tightness of the conjectured bound. The word 0i(10)i1i provides an upper bound of 34n for Conjecture 4. A better bound is discussed in Section 3.

In Conjecture 4 it is enough to pick the subsequence consisting of all appearances of the letter with the largest frequency to get the 12n lower bound. It is also easy to prove the 12n bound for Conjecture 5. No better bounds are known to be proved.

Conjecture 5 is about a palindromic subsequence aligned with some cut of the circular word into two equal halves. There are n2 such cuts, so one attempt to simplify the conjecture is to look at only two cuts which are “orthogonal”. This way we attempt to switch from the circular case to something close to the linear case, which is often easier to deal with.

Let w be a circular word of length n divisible by 4. Let w1w2w3w4 be some partition of w into four linear words of equal length. Let p1p′1 and p2p′2, |p1|=|p′1|, |p2|=|p′2|, be the longest palindromic subsequences of w such that p1, p′1, p2, p′2 are subsequences of w1w2, w3w4, w2w3, w4w1 respectively. Informally, these two palindromes are aligned to two orthogonal cuts of the word w into two linear words of equal length. The partitions w1w2,w3w4 and w2w3,w4w1 are two particular partitions (made by two orthogonal cuts) considered among all n2 partitions in Conjecture 5.

For every word w of length n divisible by 4 and its every linear representation w=w1w2w3w4, the maximum of the lengths of p1p′1 and p2p′2 defined above is at least 12n.

We checked this conjecture up to n=30 by computer. The worst known case is provided by the already appeared word 0i(10)i1i showing the tightness of the conjectured bound. The bound 13n can be proved as follows.

For every word w of length n divisible by 4 and its every linear representation w=w1w2w3w4, the maximum of the lengths of p1p′1 and p2p′2 is at least 13n.

In fact, a slightly stronger statement that the total length of p1p′1 and p2p′2 is 23n can be proved this way. We conjecture the optimal bound for this value to be equal to n.

In this section we present the main technical contribution of this paper, which is an infinite family of words providing a better upper bound for Conjecture 4. In fact, we show a stronger result for words over an arbitrary alphabet. Below we consider words over the alphabet {0,…,k−1}, i.e. w∈{0,…,k−1}∗.

We say that w′ is a consecutive subword of a word w if there exist words u,v with w=uw′v.

Thus w∈S′n if it is a concatenation of blocks (0n1n…(k−1)n), where the first and the last blocks may be shorter, and analogously for w∈S′′n.

This generalizes for pj>nir and we find that each apjj spans a subsequence of length at least kni(⌈pjni⌉−1)≥k(pj−ni) in wi. Thus, we find ℓi≥∑sj=1k(pj−ni). This gives in total

Furthermore, we find directly that ℓ≤ℓ1. This gives in total

and by adding these inequalities, we find

We think of ℓ1+ℓ2k+1 in the bound above as the “main term”. Therefore, we need that n2n1 is small. The remaining term origins from boundary phenomena due to incomplete blocks. We note that this “main term” is indeed sharp for large ℓ1,ℓ2, when n1n2 is integer and kℓ1=ℓ2 as the following example shows.

For the following considerations we will need a generalization of the notion of antipalindromes to the case of non-binary alphabet. One natural version would be to say that w is an antipalindrome if w and wR differ at every position. However, we work with a stronger notion, which still provides an interesting bound.

For every ε>0 there exists a circular word over the alphabet {0,…,k−1} with equal number of 0’s, 1’s, …, (k−1)’s (n occurences of each letter) such that any palindromic and any strongly antipalindromic subsequence of it is of length at most (2k+1+ε)kn.

Let us consider a circular word with a linear representation w1w2…wr=w, where wj=(0pj1pj…(k−1)pj)pr−j. We see directly that |wj|=kpr and, thus, kn:=|w|=krpr. Furthermore, we have wj∈Spj.

We only work in the palindromic case from now on, but the same reasoning also holds in the case of strong antipalindromes.

By using Lemma 10 we find that

This gives in total (together with the bound on |v|−|v′|)

Finally, for any ε>0, we find that the bound 2nk+1+ε holds almost surely for large n in the case when we choose every letter independently and uniformly in {0,…,k−1}.

To see this, we fix a subsequence of length nk+1+ε and call it w0. Then we try to find w0,¯¯¯¯¯¯w0,wR0 or ¯¯¯¯¯¯w0R as a subsequence of the remaining word w1. However, any letter in w1 is chosen independently and uniformly. Therefore, it takes on average k

letters until one finds one specific letter. By the law of large numbers, the number of letters we have to read in a string of independent and uniformly chosen letters to find a specific subsequence of length

is asymptotically normal distributed with mean

αℓ for some α>0. By the Chebyshev inequality, we find that w0 (or any of the mentioned forms above) appears in w1 almost surely for large n as |w1|=(k+ε)|w0|.

The minimum length of the longest palindromic/antipalindromic subsequence in the class of all linear binary words with n letters can be easily computed. However, for some restricted classes of words their behavior is more complicated. One of the simplest restrictions is to forbid some number of consecutive equal letters. The following proposition is then not hard to prove. It suggests some progress for Conjectures 1 and 4 for binary words without three consecutive equal letters.

Let w be a binary word without three consecutive equal letters. Consider the representation w=w1w2…wm such that each wi is composed of only zeros or only ones, and two consecutive words wi and wi+1 consist of different letters. Then the length of each wi is at most 2. Assume that m is even (otherwise remove wm). Then one can pick at least one letter from each pair wi, wm−i+1 (or two letters if both wi, wm−i+1 are of the same length) and all the letters from wm+12 in such a way that the resulting subsequence is a palindrome. This way we get a palindromic subsequence of length at least 23(n−2). The same proof can be done for antipalindromic subsequences. ∎

For the antipalindromic part, one can take the word (001)i to see tightness (we conjecture the bound 23n to be tight for words with equal number of zeros and ones, but we could not find an example providing tightness). For palindromic subsequences we conjecture a stronger bound.

Every binary word of length n without three consecutive equal letters has a palindromic subsequence of length at least 34(n−2).

We checked this conjecture up to n=30. The worst known cases are provided by the word (001)i(011)i, showing the tightness of the conjectured bound.

Note that every binary word without two consecutive equal letters is a sequence of alternating zeros and ones, and thus has a palindromic subsequence of length n−1, where n is the length of the word. For a three-letter alphabet it is not hard to prove the following.

Let w be a word of length n over a three-letter alphabet. If w has no two consecutive equal letters, then it has a palindromic subsequence of length at least 12(n−1).

Assume that the number of letters in w is even (otherwise, remove the last letter). Let w=w1w2…wm where wi is a word of length 2. Each such word contains two different letters. Then for each pair wi, wm−i+1 there exists a letter present in both words. By taking such a letter from every pair, we get a palindrome of length m=12(n−1). ∎

Based on these observations and computer experiments, we formulate the following conjecture.

Let w be a word of length n over an alphabet of size k, k≥2. If w has no two consecutive equal letters, then it has a palindromic subsequence of length at least 1k−1(n−1).

We checked this conjecture up to n=21 for k=4 and n=18 for k=5 by computer. A critical example for this conjecture is provided by a word which is a concatenation of the word (a1a2)i and words (aℓ+1aℓ)i−1aℓ+1 for 1<ℓ<k−1. This word shows that the conjectured bound is tight.

There are some questions besides the conjectures above that are worth mentioning. First, there is no known reduction between the palindromic and antipalindromic conjectures. Thus, it is interesting to know whether a bound for one of them implies some bound for the other one. Second, no non-trivial relation is known for the bounds for the same conjecture but different size of alphabets.

We thank anonymous reviewers for their comments on the presentation of the paper. The second author is also grateful to András Sebő, Michel Rigo and Dominique Perrin for many useful discussions during the course of the work.