Palindromic Length and Reduction of Powers

Given a nonempty finite word v, let PL(v) be the palindromic length of v; it means the minimal number of palindromes whose concatenation is equal to v. Let v^R denote the reversal of v. Given a finite or infinite word y, let Fac(y) denote the set of all finite factors of y and let maxPL(y)=max{PL(t)| t∈ Fac(y)}. Let x be an infinite non-ultimately periodic word with maxPL(x)=k<∞ and let u∈ Fac(x) be a primitive nonempty factor such that u^5 is recurrent in x. Let Ψ(x,u)={t∈ Fac(x)| u,u^R∉Fac(t)} We construct an infinite non-ultimately periodic word x such that u^5, (u^R)^5∉Fac(x), Ψ(x,u)⊆ Fac(x), and maxPL(x)≤ 3k^3. Less formally said, we show how to reduce the powers of u and u^R in x in such a way that the palindromic length remains bounded. 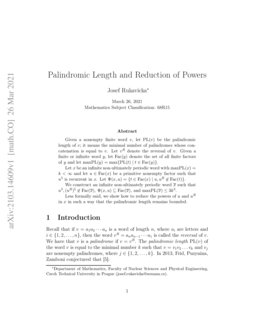 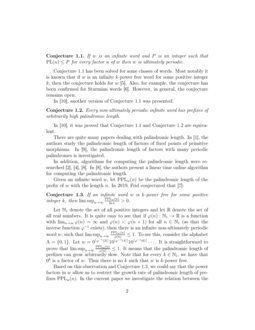 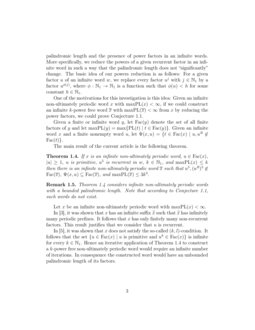 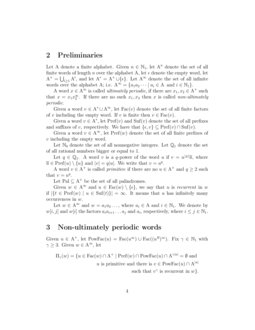 Recall that if v=a1a2⋯an is a word of length n, where ai are letters and i∈{1,2,…,n}, then the word vR=anan−1⋯a1 is called the reversal of v. We have that v is a palindrome if v=vR. The palindromic length PL(v) of the word v is equal to the minimal number k such that v=v1v2…vk and vj are nonempty palindromes, where j∈{1,2,…,k}. In 2013, Frid, Puzynina, Zamboni conjectured that [FrPuZa]:

If w is an infinite word and P is an integer such that PL(u)≤P for every factor u of w then w is ultimately periodic.

Conjecture 1.1 has been solved for some classes of words. Most notably it is known that if w is an infinite k-power free word for some positive integer k, then the conjecture holds for w [FrPuZa]. Also, for example, the conjecture has been confirmed for Sturmian words [FRID2018202]. However, in general, the conjecture remains open.

If an infinite word w is k-power free for some positive integer k, then limsupn→∞PPLw(n)lnn>0.

Let N1 denote the set of all positive integers and let R denote the set of all real numbers. It is quite easy to see that if φ(n):N1→R is a function with limn→∞φ(n)=∞ and φ(n)<φ(n+1) for all n∈N1 (so that the inverse function φ−1 exists), then there is an infinite non-ultimately periodic word w, such that limsupn→∞PPLw(n)φ(n)≤1. To see this, consider the alphabet A={0,1}. Let w=0⌈φ−1(2)⌉10⌈φ−1(4)⌉10⌈φ−1(6)⌉⋯. It is straightforward to prove that limsupn→∞PPLw(n)φ(n)≤1. It means that the palindromic length of prefixes can grow arbitrarily slow. Note that for every k∈N1, we have that 0k is a factor of w. Thus there is no k such that w is k-power free.

Based on this observation and Conjecture 1.3, we could say that the power factors in w allow us to restrict the growth rate of palindromic length of prefixes PPLw(n). In the current paper we investigate the relation between the palindromic length and the presence of power factors in an infinite words. More specifically, we reduce the powers of a given recurrent factor in an infinite word in such a way that the palindromic length does not “significantly” change. The basic idea of our powers reduction is as follows: For a given factor u of an infinite word w, we replace every factor uj with j∈N1 by a factor uϕ(j), where ϕ:N1→N1 is a function such that ϕ(u)<h for some constant h∈N1.

One of the motivations for this investigation is this idea: Given an infinite non-ultimately periodic word x with maxPL(x)<∞, if we could construct an infinite k-power free word ¯¯¯x with maxPL(¯¯¯x)<∞ from x by reducing the power factors, we could prove Conjecture 1.1.

Given a finite or infinite word y, let Fac(y) denote the set of all finite factors of y and let maxPL(y)=max{PL(t)∣t∈Fac(y)}. Given an infinite word x and a finite nonempty word u, let Ψ(x,u)={t∈Fac(x)∣u,uR∉Fac(t)}.

The main result of the current article is the following theorem.

Theorem 1.4 considers infinite non-ultimately periodic words with a bounded palindromic length. Note that according to Conjecture 1.1, such words do not exist.

Let x be an infinite non-ultimately periodic word with maxPL(x)<∞.

In [BucMichGreedy2018], it was shown that x has an infinite suffix ˜x such that ˜x has infinitely many periodic prefixes. It follows that x has only finitely many non-recurrent factors. This result justifies that we consider that u is recurrent.

In [FrPuZa], it was shown that x does not satisfy the so-called (k,l)-condition. It follows that the set {u∈Fac(x)∣u is primitive and uk∈Fac(x)} is infinite for every k∈N1. Hence an iterative application of Theorem 1.4 to construct a k-power free non-ultimately periodic word would require an infinite number of iterations. In consequence the constructed word would have an unbounded palindromic length of its factors.

Given a word v∈A∗∪A∞, let Fac(v) denote the set of all finite factors of v including the empty word. If v is finite then v∈Fac(v).

Given a word v∈A∗, let Pref(v) and Suf(v) denote the set of all prefixes and suffixes of v, respectively. We have that {ϵ,v}⊆Pref(v)∩Suf(v).

Given a word v∈A∞, let Pref(w) denote the set of all finite prefixes of v including the empty word.

Let Pal⊆A+ be the set of all palindromes.

The condition Pref(w)∩PowFac(u)∩Aγ|u|=∅ guarantees the power vγ is not a prefix of w. This is just for our conveniance, when definining the factorization of w in next sections. Since w non-ultimately periodic, there are infinitely many suffixes of w without the prefix vγ. We apply this obervation in the proof of Theorem 1.4.

We call an element (i,j)∈Rw,u a u-run or simply a run. The term “run” has been used also in [FrPuZa]. Our definition of a run is slightly different. Our definition guarantees that runs do not overlap with each other, as shown in the next lemma. In addition, note that if (i,j)∈Rw,u is a u-run, it does not imply that u=w[i,i+|u|−1].

The case i1>i2 is analogous. Also it is straightforward to see that i1=i2 if and only if j1=j2. This completes the proof. ∎

From (1) it follows that

4 Factorization and the reduced word

Let minRunw,u:N1→Rw,u be defined as follows:

and for every k∈N1 we define that

We define a special factorization of the word w, that will allow us to construct an infinite power free word based on w with “reduced” powers of u.

It is clear that factrz(w,u) exists and is uniquely determined. Obviously we have that w=w1zd11w2zd22….

We define a set of functions, that we will use to “reduce” the exponents dk of factors zk. Fix h∈N1 with h≥γ. Let

The next lemma, less formally said, shows that the reduction by ϕ∈Φh preserves the reverse relation.

For our convenience when working with the reduced word rdcw,u,ϕ we introduce some more functions. Given j∈N1 and ϕ∈Φh, let

We will need the following simple lemma.

This ends the proof. ∎

Lemma 3.2 implies that there is j∈N1 such that

It follows that R¯¯¯w,u=Ω. This completes the proof. ∎

From the proof of Proposition 4.7 it follows also that rpow,u,ϕ is a bijection between positions of w and ¯¯¯¯w that are not covered by u-runs.

For our main result we need that rdcw,u,ϕ is non-ultimately periodic. We show we can select ϕ in such a way that this requirement is satisfied.

Let us fix ϕ∈Φh such that rdcw,u,ϕ is non-ultimately periodic. Theorem 4.9 asserts that such ϕ exists.

We will need the following elementary Lemma concerning the palindromic length. We omit the proof.