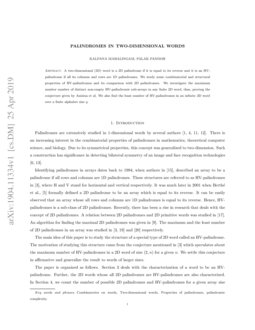 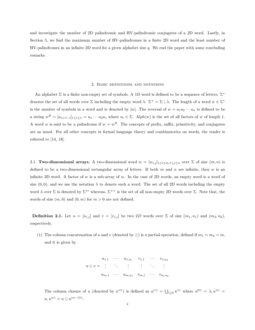 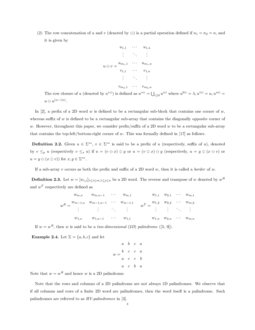 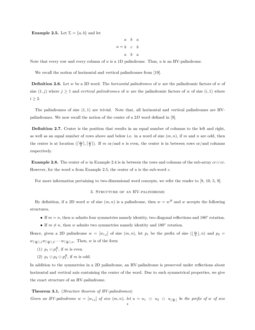 Palindromes are extensively studied in 1-dimensional words by several authors [1, 4, 11, 12]

. There is an increasing interest in the combinatorial properties of palindromes in mathematics, theoretical computer science, and biology. Due to its symmetrical properties, this concept was generalized to two-dimension. Such a construction has significance in detecting bilateral symmetry of an image and face recognition technologies

The main idea of this paper is to study the structure of a special type of 2D word called an HV-palindrome. The motivation of studying this structure came from the conjecture mentioned in [3] which speculates about the maximum number of HV-palindromes in a 2D word of size (2,n) for a given n. We settle this conjecture in affirmative and generalize the result to words of larger sizes.

An alphabet Σ is a finite non-empty set of symbols. A 1D word is defined to be a sequence of letters. Σ∗ denotes the set of all words over Σ including the empty word λ. Σ+=Σ∖λ. The length of a word w∈Σ∗ is the number of symbols in a word and is denoted by |w|. The reversal of w=a1a2⋯an is defined to be a string wR=[an+1−i]1≤i≤n=an⋯a2a1 where ai∈Σ. Alph(w) is the set of all factors of w of length 1. A word w is said to be a palindrome if w=wR. The concepts of prefix, suffix, primitivity, and conjugates are as usual. For all other concepts in formal language theory and combinatorics on words, the reader is referred to [14, 18].

A two-dimensional word w=[wi,j]1≤i≤m,1≤j≤n over Σ of size (m,n) is defined to be a two-dimensional rectangular array of letters. If both m and n are infinite, then w is an infinite 2D word. A factor of w is a sub-array of w. In the case of 2D words, an empty word is a word of size (0,0), and we use the notation λ to denote such a word. The set of all 2D words including the empty word λ over Σ is denoted by Σ∗∗ whereas, Σ++ is the set of all non-empty 2D words over Σ. Note that, the words of size (m,0) and (0,m) for m>0 are not defined.

If a sub-array v occurs as both the prefix and suffix of a 2D word w, then it is called a border of w.

Let w=[wi,j]1≤i≤m,1≤j≤n be a 2D word. The reverse and transpose of w denoted by wR and wT respectively are defined as

Note that w=wR and hence w is a 2D palindrome.

Note that the rows and columns of a 2D palindrome are not always 1D palindromes. We observe that if all columns and rows of a finite 2D word are palindromes, then the word itself is a palindrome. Such palindromes are referred to as HV-palindromes in [3].

Note that every row and every column of u is a 1D palindrome. Thus, u is an HV-palindrome.

We recall the notion of horizontal and vertical palindromes from [19].

The palindromes of size (1,1) are trivial. Note that, all horizontal and vertical palindromes are HV-palindromes. We now recall the notion of the center of a 2D word defined in [9].

are odd, then the center is at location

(⌈m2⌉,⌈n2⌉). If m or/and n is even, the center is in between rows or/and columns respectively.

The center of w in Example 2.4 is in between the rows and columns of the sub-array cc⊖cc. However, for the word u from Example 2.5, the center of u is the sub-word c.

For more information pertaining to two-dimensional word concepts, we refer the reader to [8, 10, 5, 9].

By definition, if a 2D word w of size (m,n) is a palindrome, then w=wR and w accepts the following structures.

In addition to the symmetries in a 2D palindrome, an HV-palindrome is preserved under reflections about horizontal and vertical axis containing the center of the word. Due to such symmetrical properties, we give the exact structure of an HV-palindrome.

One can easily observe that the above result does not hold true in the case of 2D palindromes that are not HV-palindromes. For example, the word w given in Example 2.4 does not satisfy the conditions given in Proposition 3.3.

where x,y∈Σ are distinct, u and vT are 1D words and p is a 2D palindrome is itself a non-HV-palindrome which is a contradiction. ∎

We now count the number of borders in an HV-palindrome. We first observe a general result for 2D palindromes.

Every border of an HV-palindrome is a 2D palindrome.

Let Σ be a finite alphabet such that |Σ|=k. Then,

We illustrate with the following example.

Consider the binary alphabet Σ={a,b}. The set of all 2D-palindromes of size (2,2) is given by:

which has exactly 4 2D palindromes and 2 HV-palindromes of size (2,2).

4.1. Palindromes in a conjugacy class

Let u1,u2,⋯um and v1,v2,⋯vn be respectively the m rows and the n columns of a word w of size (m,n). The cyclic rotation of k columns, for 1≤k≤n denoted by ↺Colk is defined as the word

Similarly, the cyclic rotation of k rows, for 1≤k≤m denoted by ↺Rowk is defined as the word

Then, the conjugacy class of u denoted by Conj(u) is defined as

Note that, given any 2D word w of size (m,n), the number of elements in its conjugacy class can be at most mn. We illustrate with the following example.

Consider the 2D word w=abc⊖cbb⊖bbc⊖cba of size (4,3). Then, the conjugacy class of w is given by:

We give another example of a 2D word v=abba⊖aaaa⊖aaaa⊖abba of size (4,4) where |HVPALConj(v)|=|PALConj(v)|=4.

We first recall the following result for 1D words from [12].

A conjugacy class of a 1D word contains at most two palindromes and it has exactly two if and only if it contains a word of the form (uuR)i, where uuR is a primitive word and i≥1.

We have the following result.

Theorem 4.7 also holds in case of HV-palindromes. We have the following result.

5. Bounds on the number of palindromes

In this section, we find the maximum and the least number of HV-palindromes in any 2D finite and infinite word respectively. We also compare these results with the existing results on 2D palindromes.

5.1. On the maximum number of HV-palindromes