A traditional artificial neural network (ANN) is normally trained slowly by a gradient descent algorithm, such as the backpropagation algorithm, since a large number of hyperparameters of the ANN need to be fine-tuned with many training epochs. Since a large number of hyperparameters of a deep neural network, such as a convolutional neural network, occupy much memory, a memory-inefficient deep learning model is not ideal for real-time Internet of Things (IoT) applications on various devices, such as mobile phones. Thus, it is necessary to develop fast and memory-efficient Artificial Intelligence of Things (AIoT) systems for real-time on-device applications. We created a novel wide and shallow 4-layer ANN called "Pairwise Neural Network" ("PairNet") with high-speed non-gradient-descent hyperparameter optimization. The PairNet is trained quickly with only one epoch since its hyperparameters are directly optimized one-time via simply solving a system of linear equations by using the multivariate least squares fitting method. In addition, an n-input space is partitioned into many n-input data subspaces, and a local PairNet is built in a local n-input subspace. This divide-and-conquer approach can train the local PairNet using specific local features to improve model performance. Simulation results indicate that the three PairNets with incremental learning have smaller average prediction mean squared errors, and achieve much higher speeds than traditional ANNs. An important future work is to develop better and faster non-gradient-descent hyperparameter optimization algorithms to generate effective, fast, and memory-efficient PairNets with incremental learning on optimal subspaces for real-time AIoT on-device applications. 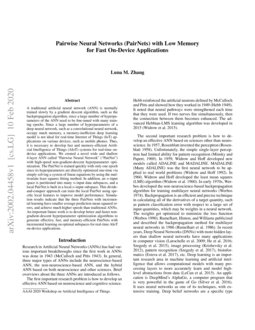 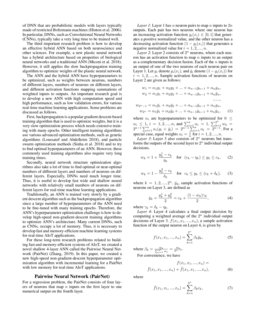 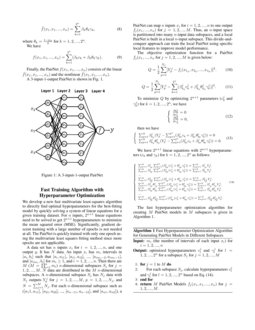 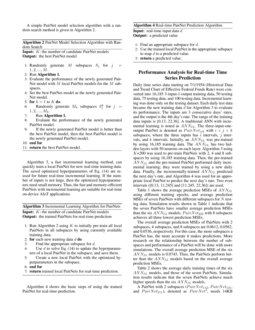 We propose a genetic algorithm (GA) for hyperparameter optimization of a...
Aaron Vose, et al. ∙

The fully connected (FC) layer, one of the most fundamental modules in a...
Kanya Mo, et al. ∙

The manipulator workspace mapping is an important problem in robotics an...
Peiyuan Liao, et al. ∙

Research in Artificial Neural Networks (ANNs) has had various important breakthroughs since the first work in ANNs was done in 1943 (McCulloch and Pitts 1943). In general, three major types of ANNs include the neuroscience-based ANN, the non-neuroscience-based ANN, and the hybrid ANN based on both neuroscience and other sciences. Brief overviews about the three ANNs are introduced as follows.

The first important research problem is how to develop an effective ANN based on neuroscience and cognitive science. Hebb reinforced the artificial neurons defined by McCulloch and Pitts and showed how they worked in 1949 (Hebb 1949). It noted that neural pathways were strengthened each time that they were used. If two nerves fire simultaneously, then the connection between them becomes enhanced. The advanced Hebbian-LMS learning algorithm was developed in 2015 (Widrow et al. 2015).

The second important research problem is how to develop an effective ANN based on sciences other than neuroscience. In 1957, Rosenblatt invented the perceptron (Rosenblatt 1958). Unfortunately, the simple single-layer perceptron had limited ability for pattern recognition (Minsky and Papert, 1969). In 1959, Widrow and Hoff developed new models called ADALINE and MADALINE. MADALINE (Many ADALINE) was the first neural network to be applied to real world problems (Widrow and Hoff 1992). In 1960, Widrow and Hoff developed the least mean squares (LMS) algorithm (Widrow et al. 1960). In early 1970s, Werbos developed the non-neuroscience-based backpropagation algorithm for training multilayer neural networks (Werbos 1974). Backpropagation is an efficient and precise technique in calculating all of the derivatives of a target quantity, such as pattern classification error with respect to a large set of input quantities, which may be weights in a neural network. The weights get optimized to minimize the loss function (Werbos 1990). Rumelhart, Hinton, and Williams publicized and described the backpropagation method for multilayer neural networks in 1986 (Rumelhart et al. 1986). In recent years, Deep Neural Networks (DNNs) with more hidden layers than shallow neural networks have many applications in computer vision (Larochelle et al. 2009; He et al. 2016; Szegedy et al. 2015), image processing (Krizhevsky et al. 2012), pattern recognition (Szegedy et al. 2017), bioinformatics (Esteva et al. 2017), etc. Deep learning is an important research area in machine learning and artificial intelligence that allows computational models with many processing layers to more accurately learn and model high-level abstractions from data (LeCun et al. 2015). An application is DeepMind’s AlphaGo, a computer program that is very powerful in the game of Go (Silver et al. 2016). It uses neural networks as one of its techniques, with extensive training. Deep belief networks are a specific type of DNN that are probabilistic models with layers typically made of restricted Boltzmann machines (Hinton et al. 2006). In particular, DNNs, such as Convolutional Neural Networks (CNNs), typically take a very long time to be trained well.

The third important research problem is how to develop an effective hybrid ANN based on both neuroscience and other sciences. For example, a new plastic neural network has a hybrid architecture based on properties of biological neural networks and a traditional ANN (Miconi et al. 2018). However, it still applies the slow backpropagation training algorithm to optimize weights of the plastic neural network.

The ANN and the hybrid ANN have hyperparameters to be optimized, such as weights between neurons, numbers of different layers, numbers of neurons on different layers, and different activation functions mapping summations of weighted inputs to outputs. An important research goal is to develop a new ANN with high computation speed and high performance, such as low validation errors, for various real-time machine learning applications. Some problems are discussed as follows.

Traditionally, an ANN is trained very slowly by a gradient descent algorithm such as the backpropagation algorithm since a large number of hyperparameters of the ANN need to be fine-tuned with many training epochs. Therefore, the ANN’s hyperparameter optimization challenge is how to develop high-speed non-gradient-descent training algorithms to optimize ANN’s architecture. Many current DNNs, such as CNNs, occupy a lot of memory. Thus, it is necessary to develop fast and memory-efficient machine learning systems for real-time AIoT applications.

For these long-term research problems related to building fast and memory-efficient systems of AIoT, we created a novel shallow 4-layer ANN called the Pairwise Neural Network (PairNet) (Zhang, 2019). In this paper, we created a new high-speed non-gradient-descent hyperparameter optimization algorithm with incremental learning for a PairNet with low memory for real-time AIoT applications.

For a regression problem, the PairNet consists of four layers of neurons that map n inputs on the first layer to one numerical output on the fourth layer.

Layer 1: Layer 1 has n neuron pairs to map n inputs to 2n outputs. Each pair has two neurons where one neuron has an increasing activation function gi(xi)∈[0,1] that generates a positive normalized value, and the other neuron has a decreasing activation function (1−gi(xi)) that generates a negative normalized value for i=1,2,...,n.

Layer 2: Layer 2 consists of 2n neurons, where each neuron has an activation function to map n inputs to an output as a complementary decision fusion. Each of the n inputs is an output of one of the two neurons of each neuron pair on Layer 1. Let gi denote gi(xi), and ¯gi denote (1−gi(xi)) for i=1,2,...,n. Sample activation functions of neurons on Layer 2 are given as follows:

Layer 3: Layer 3 also consists of 2n neurons but transforms the outputs of the second layer to 2n individual output decisions.

Layer 4: Layer 4 calculates a final output decision by computing a weighted average of the 2n individual output decisions of Layer 3. f(x1,x1,...,xn), a sample activation function of the output neuron on Layer 4, is given by

For convenience, we have

We develop a new fast multivariate least-squares algorithm to directly find optimal hyperparameters for the best-fitting model by quickly solving a system of linear equations for a given training dataset. For n inputs, 2n+1 linear equations need to be solved to get 2n+1 hyperparameters to minimize the mean squared error (MSE). Significantly, gradient descent training with a large number of epochs is not needed at all. The PairNet is quickly trained with only one epoch using the multivariate least squares fitting method since more epochs are not applicable.

The fast hyperparameter optimization algorithm for creating M PairNet models in M subspaces is given in Algorithm 1.

A simple PairNet model selection algorithm with a random search method is given in Algorithm 2.

Algorithm 4 shows the basic steps of using the trained PairNet for real-time prediction.

Daily time series data starting on 7/1/1954 (Historical Data and Trend Chart of Effective Federal Funds Rate) were converted into 16,185 3-input-1-output training data, 50 testing data, 75 testing data, and 100 testing data. Incremental learning was done only on the testing dataset. Each daily test data became the new training data d for Algorithm 3 to evaluate its performance. The inputs are 3 consecutive days’ rates, and the output is the 4th day’s rate. The range of the training data inputs is [0.13, 22.36]. A traditional ANN with incremental learning is noted as ANNIL. The three-input-one-output PairNet is denoted as PairNetijk with i×j×k subspaces, where the three inputs has i intervals, j intervals, and k intervals. Initially, an ANNIL was pre-trained by using 16,185 training data. The ANNIL has two hidden layers with 50 neurons on each layer. Algorithm 3 using K=200 was used to pre-train PairNets with 2, 4 and 8 subspaces by using 16,185 training data. Then, the pre-trained ANNIL and the pre-trained PairNet performed daily incremental learning; they were trained by using a new daily data. Finally, the incrementally-trained ANNIL predicted the next day’s rate, and Algorithm 4 was used for an appropriate local PairNet to predict the next day’s rate. Two even intervals ([0.13, 11.245] and [11.245, 22.36]) are used.

Different from slow gradient descent training algorithms and other tedious training algorithms, such as genetic algorithms, the new high-speed non-gradient-descent training algorithm with direct hyperparameter computation can quickly train the new wide and shallow 4-layer PairNet with only one epoch since its hyperparameters are directly optimized one-time via simply solving a system of linear equations by using the multivariate least squares fitting method. For AIoT applications, partitioning big data space into many small data subspaces is useful and easy to build local PairNets because having nonlinear functions on small data subspaces are simpler than having a global function on the whole big data space.

Simulation results indicate that the PairNets have smaller average prediction MSEs, and achieve much higher speeds than the ANNs for the real-time time series prediction application. Thus, it is feasible and necessary to continue to improve the effectiveness and efficiency of the new shallow PairNet by developing more intelligent non-gradient-descent training algorithms for real-time AIoT applications.

The PairNet’s performance will be compared with that of other existing techniques, such as LSTM-based recurrent neural network, and more datasets will be used. Although the PairNet is a shallow neural network since it has only four layers of neurons, it is actually a wide neural network because both the second layer and the third layer have

2n neurons with the first layer having n

neurons. Thus, the PairNet has the curse of dimensionality. We will develop advanced divide-and-conquer methods to solve the problem.

The preliminary simulations applied an even data partitioning method to divide a whole 3-input space into subspaces. In the future, more intelligent space partition methods will be created to build more effective local PairNets on optimized n-input data subspaces. Also, for classification problems, the new PairNet with a new activation function, such as Softmax, of the neuron on Layer 4 will be created.

The author would like to thank the reviewers very much for their valuable comments that help improve the quality of this paper.

Krizhevsky, A.; Sutskever, I.; and Hinton, G.E. 2012. Imagenet classification with deep convolutional neural networks. In

McCulloch, W. and Pitts, W. 1943. A logical calculus of the ideas immanent in nervous activity. Bulletin of Mathematical Biophysics 5:115–133.

Rosenblatt, F. 1958. The Perceptron: A Probabilistic Model for Information Storage and Organization in the Brain. Psychological Review 65(6): 386–408.

Sinha, T.; Haidar, A.; and Verma, B. 2018. Particle Swarm Optimization Based Approach for Finding Optimal Values of Convolutional Neural Network Parameters. In

Szegedy, C.; Ioffe, S.; Vanhoucke, V.; and Alemi, A. 2017. Inception-v4, Inception-ResNet and the Impact of Residual Connections on Learning. In

Proceedings of the Thirty-First AAAI Conference on Artificial Intelligence (AAAI-17), 4278–4284.