Enabling ultra-reliable low latency communications (uRLLC) over 5G wireless networks creates challenging design requirements, particularly on the air-interface. The stringent latency and reliability targets require enhancements at different layers of the protocol stack. On the other hand, the parallel redundancy protocol (PRP), wherein each data packet is duplicated and transmitted concurrently over two independent networks, provides a simple solution for improving reliability and reducing latency in wireless networks. PRP can be realized in cellular networks through the dual connectivity (DC) solution. Recently, 3GPP has introduced packet duplication functionality in 5G wireless networks. To this end, this paper provides an overview of the packet duplication functionality in 5G, in light of recent developments within 3GPP, and also highlights the related technical challenges. 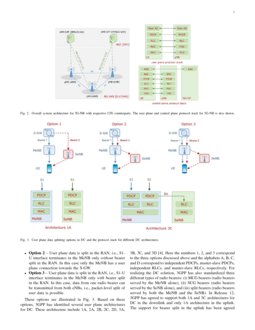 This paper puts forth a multi-stream networking paradigm, referred to as...
Lihao Zhang, et al. ∙

Beyond the Trees: Resilient Multipath for Last-mile WISP Networks

Expanding the reach of the Internet is a topic of widespread interest to...
Bilal Saleem, et al. ∙

Future wireless networks are expected to evolve towards an intelligent a...
Chongwen Huang, et al. ∙

5G wireless networks are expected to enable a range of use cases across different vertical industries. According to the International Telecommunication Union (ITU) [1]

[2]. Among the three service categories, the most challenging design requirements arise for uRLLC, which encompasses critical applications like the Tactile Internet [3]. This is primarily due to the stringent latency and reliability targets which become particularly difficult to achieve considering the inherent trade-off between latency and reliability. Current 5G standardization activities reveal that the legacy long term evolution (LTE) networks will be a crucial component of the 5G ecosystem. The overall 5G radio access solution will consist of evolved LTE (5G-LTE) radio access, complemented with backward-compatible technological enhancements, co-existing with New Radio (NR) access technology operating in new spectrum bands.

On the other hand, dual connectivity (DC), introduced in Release 12 of 3GPP specifications [4], allows a user to be simultaneously served by two different base stations, operating on different carrier frequencies, and connected via a non-ideal backhaul. Multi-connectivity extends the DC principle in the form of simultaneous connectivity to different radio access technologies (RATs). DC primarily aims at improving per-user throughput and mobility robustness; however, it can potentially be exploited to improve the resilience of wireless transmissions. DC would be crucial in supporting tight interworking between LTE and NR access technologies.

The design of air-interface is unarguably the most challenging aspect of enabling uRLLC over 5G wireless networks. In order to fulfil the stringent latency and reliability requirements, optimizations and enhancements are required at different layers of the air-interface protocol stack. To support uRLLC, a number of air-interface design characteristics, such as scaling of orthogonal frequency division multiplexing (OFDM) numerology, shortening of transmission time interval (TTI), optimization of user plane and control plane protocols, will come into play. The parallel redundancy protocol (PRP), as specified in IEC 62439-3 [5], is particularly attractive for uRLLC. In PRP, every data packet is duplicated and transmitted concurrently over two independent networks. Such packet duplication provides seamless redundancy that not only improves reliability but also reduces latency in communication. With DC, it becomes possible to realize packet duplication through PRP in 5G wireless networks. Recently, 3GPP has introduced packet duplication functionality, as part of Release 15, for 5G radio access [6].

The concept of packet duplication was first introduced in IEC 62439-3 specifications, in the form of PRP, to provide a certain degree of fault tolerance in industrial Ethernet networks. In case of PRP, every node is connected to two distinct networks. A source node employing PRP duplicates and transmits every data packet over two independent networks. The first copy that arrives at a destination node is retained whereas the second copy is discarded. PRP guarantees high availability for industrial Ethernet networks and provides seamless switchover and recovery in case of network failure. This concept of PRP illustrated in Fig. 1. Note that a redundancy box takes care of duplicating packets at the transmitter side and removing duplicates at the receiver side.

PRP is particularly attractive for wireless environments as it provides a simple and robust solution to compensate for the effects of interference and small-scale disruptions due to which wireless networks are generally deemed unreliable. PRP provides seamless redundancy that improves reliability (and reduces latency) as packets are lost (or retransmitted) only when they are dropped on both networks. The concept of PRP can be applied to a range of wireless technologies. Recently, Cena et al. [7] proposed Wi-Red which is essentially seamless redundancy, as defined by PRP, applied to Wi-Fi networks. Similarly, Papadopoulos et al. [8] developed Leapfrog Collaboration which applies the PRP principle in the form of parallel transmissions over two paths in case of 6TiSCH wireless networks. While PRP is under active investigation for different industrial wireless applications, its use in mobile/cellular networks is still at a nascent stage.

The LTE radio access network (RAN), known as evolved universal terrestrial RAN (E-UTRAN), consists of the user equipment (UE), the evolved Node B (eNB), and the air-interface (also known as E-UTRA). The eNBs are interconnected with each other by means of the X2 interface. The eNBs are connected by means of the S1 interface to the evolved packet core (EPC), more specifically to the serving gateway (S-GW) over the S1-U interface and to the mobility management entity over the S1-MME interface.

The user plane protocol stack for NR consists of the physical (PHY), medium access control (MAC), radio link control (RLC), and the packet data convergence protocol (PDCP) layers. In addition, a new access stratum (AS) layer has been introduced above PDCP. The key functionalities of different layers are described as follows.

In the control plane, PHY, MAC, and RLC layers perform the same functions as for the user plane. The PDCP layer performs ciphering and integrity protection. The control plane further consists of radio resource control (RRC) and non-access stratum (NAS) layers as described below.

For the sake of describing the DC solution, we consider an LTE scenario and adopt the LTE terminology. With DC, a UE is simultaneously connected to two different base stations: a master eNB (MeNB) and a secondary eNB (SeNB). The MeNB and the SeNB are connected via a non-ideal backhaul and operate on different carrier frequencies. The group of serving cells associated with the MeNB and the SeNB is termed as master cell group (MCG) and secondary cell group (SCG), respectively. DC is only applicable to UEs in RRC connected mode. A DC-enabled UE has two identities: one C-RNTI in the MCG and another C-RNTI in the SCG. In case of DC, three different options can be distinguished for splitting of user plane data.

These options are illustrated in Fig. 3. Based on these options, 3GPP has identified several user plane architectures for DC. These architecture include 1A, 2A, 2B, 2C, 2D, 3A, 3B, 3C, and 3D [4]. Here the numbers 1, 2, and 3 correspond to the three options discussed above and the alphabets A, B, C, and D correspond to independent PDCPs, master-slave PDCPs, independent RLCs, and master-slave RLCs, respectively. For realizing the DC solution, 3GPP has also standardized three different types of radio bearers: (i) MCG bearers (radio bearers served by the MeNB alone), (ii) SCG bearers (radio bearers served by the SeNB alone), and (iii) split bearers (radio bearers served by both the MeNB and the SeNB). In Release 12, 3GPP has agreed to support both 1A and 3C architectures for DC in the downlink and only 1A architecture in the uplink. The support for bearer split in the uplink has been agreed in Release 13. From a control plane perspective, the MeNB is responsible for maintaining the RRC connection of a UE. The control plane connection towards the MME is always terminated in the MeNB. For a detailed description of DC, interested readers are referred to [10, 4]. Note that, DC can be realized in LTE-LTE, NR-NR, and LTE-NR scenarios.

It is important to mention here that the PDCP layer in LTE already supports duplicate detection functionality based on the sequence number. Therefore, if the transmitter sends duplicate PDCP PDUs (via different legs), only the earlier received PDCP PDU can be processed at the receiver. The PDCP PDU arriving later is simply discarded without requiring any changes in the specification. Hence, packet duplication can also be extended to the LTE-NR DC scenario. Proposals for introducing packet duplication functionality in LTE PDCP are under consideration within 3GPP.

The efficiency of packet duplication is dependent on a number of factors which are described as follows.

Therefore, packet duplication must be dynamically controlled and used only if the gain of duplication is expected.

Packet duplication in DC-enabled 5G wireless networks provides a number of benefits which are described as follows.

While packet duplication provides a number of benefits, it also creates various challenges which are described as follows.

When packet duplication is activated, the same PDCP PDU is transmitted via the MgNB leg (leg 1) and the SgNB leg (leg 2). Since the PDCP PDU in each leg is scheduled and transmitted independently, it might be successful in one leg and unsuccessful in the other leg. Consider that the transmission of the UE is successful via leg 1 whereas it failed in leg 2. We assume that the RLC entities in both the legs are operating in acknowledged mode. Since the RLC entity of leg 2 is unaware of the successful transmission via the leg 1, it will request the UE to retransmit the lost RLC PDU, which results in an unnecessary retransmission in leg 1. This redundant retransmission results in wastage of air-interface resources. Besides, it blocks subsequent RLC PDU transmissions as retransmissions have higher priority over new PDUs.

To resolve this issue, the RLC entity in the failed leg needs to be aware of the successful transmission in the other leg. This means cancelling a transmission on one leg when a duplicate packet is successfully transmitted on the other leg. However, such interaction between the RLC entities requires intra-node and inter-node signaling. One solution [14] is that the transmitting RLC entity in the successful leg informs the transmitting RLC entity in the failed leg, e.g., through an RLC sequence number. However, the RLC sequence number in both legs needs to be aligned. If the transmitter is the gNB then some signaling mechanism is required over the Xn interface. In case the transmitter is a UE such information exchange becomes an implementation-specific issue.

The split bearer is configured with a split threshold and a path restriction which determines the path to be used when the PDCP data volume is less than the split threshold. The split threshold and the path restriction are ignored when packet duplication is activated; however, these must be taken into account upon deactivation. Such conditional application of the split threshold may lead to significant complexity from a UE implementation perspective [15]. The complexity can potentially be reduced by defining a new type of radio bearer, e.g., duplicate bearer which is currently under discussion within 3GPP. The current proposal is to configure the duplicate bearer with packet duplication, the RLC entities pertaining to both legs, and the default leg. With duplicate bearer, both RLC entities are maintained once packet duplication is deactivated; however, the PDCP entity only transmits data to the default leg.