Local meshless methods obtain higher convergence rates when RBF approximations are augmented with monomials up to a given order. If the order of the approximation method is spatially variable, the numerical solution is said to be p-refined. In this work, we employ RBF-FD approximation method with polyharmonic splines augmented with monomials and study the numerical properties of p-refined solutions, such as convergence orders and execution time. To fully exploit the refinement advantages, the numerical performance is studied on a Poisson problem with a strong source within the domain. 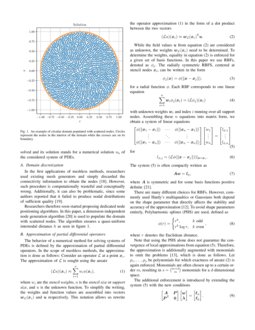 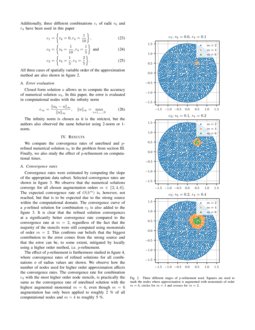 We develop a convergence theory of space-time discretizations for the li...
Pratyuksh Bansal, et al. ∙

In this paper, we study the numerical approximation of a general second ...
Aurelien Junior Noupelah, et al. ∙

In solution verification, the primary goal is finding an accurate and re...
Sharp Chim Yui Lo, et al. ∙

In this paper, we characterize the wavelet compressibility of compound P...
Shayan Aziznejad, et al. ∙

Meshless methods are becoming a strong alternative to mesh based methods, when numerical treatment of partial differential equations is required. A strong advantage of meshless methods is that they can operate on scattered nodes, contrary to mesh-based methods, that need a computationally expensive mesh to operate. Many different meshless methods have been proposed so far, e.g. meshless Element Free Galerkin

and others. In this paper we use a method that generalizes the traditional Finite Difference Method, called radial-basis-function-generated finite differences (RBF-FD). From a historical point of view, RBF-FD was first mentioned by Tolstykh

The RBF-FD use RBFs to approximate the linear differential operators [5]. Most of the RBFs, like Hardy’s multiquadrics or Gaussians, include shape parameter [21] that directly affects the stability of the approximation and accuracy of the solution [15]. To avoid shape parameter problems altogether, Polyharmonic splines (PHS) have been proposed [4], however, PHS alone do not guarantee convergent behavior. Therefore, RBFs are augmented with monomials up to given order [4]. The RBF part of the approximation takes care of the potential ill-conditioning [10], while the polynomial part not only ensures convergent behavior but also allows direct control over the convergence rate.

It has already been proven that having the control over the convergence rate is beneficial, when a compromise between the accuracy of the solution and computational time is needed [11]. However, in this paper, we exploit the ability to control the order of the approximation method to employ spatial variability of the approximating method order. Such solution procedure refinement is also known as p-refinement [3] and is a well known refinement procedure in the scope of finite element methods [2], where it also forms the basis of the highly successful hp-adaptive methods. In this paper, convergence rates and computational times of p-refined solutions are studied. It is shown that spatially variable order of the approximation method can notably reduce the computational time and improve the convergence rate at the same time.

The solution procedure can be roughly divided into three steps. Using a dedicated node positioning algorithm the domain is first discretized. Afterwards, the differential operators are approximated in each node, resulting in stencil weights. Finally, the system of PDEs is discretized and, therefore, transformed to a system of linear equations. The system is solved and its solution stands for a numerical solution uh of the considered system of PDEs.

In the first applications of meshless methods, researchers used existing mesh generators and simply discarded the connectivity information to obtain the nodes [13]. However, such procedure is computationally wasteful and conceptually wrong. Additionally, it can also be problematic, since some authors reported that it failed to produce nodal distributions of sufficient quality [16].

is the unknown function. To simplify the writing, the weights and function values are assembled into vectors

wL(xc) and u respectively. This notation allows us rewrite the operator approximation (1) in the form of a dot product between the two vectors

While the field values u from equation (2) are considered as unknown, the weights wL(xc) need to be determined. To determine the weights, equality in equation (2) is enforced for a given set of basis functions. In this paper we use RBFs, denoted as ϕj. The radially symmetric RBFS, centered at stencil nodes xi, can be written in the form

for a radial function ϕ. Each RBF corresponds to one linear equation

with unknown weights wi and index i running over all support nodes. Assembling these n equations into matrix form, we obtain a system of linear equations

The system (5) is often compactly written as

where A is symmetric and for some basis functions positive definite [7].

There are many different choices for RBFs. However, commonly used Hardy’s multiquadrics or Gaussians both depend on the shape parameter that directly affects the stability and accuracy of the approximation [15]. To avoid shape parameters entirely, Polyharmonic splines (PHS) are used, defined as

where r denotes the Euclidean distance.

Note that using the PHS alone does not guarantee the convergence of local approximations from equation (5). Therefore, the approximation is additionally augmented with monomials to omit the problems [4], which is done as follows. Let p1,…,ps be polynomials for which exactness of ansatz (2) is again enforced. Monomials are often chosen up to a certain order m, resulting in s=(m+dm) monomials for a d-dimensional space.

is the vector of values assembled by applying the considered operator L to the polynomials at xc. Weights obtained by solving (9) are taken as approximations of L at xc while additional unknowns λ, the Lagrange multipliers, are discarded.

The augmentation with monomials not only helps with convergence but also provides direct control over the convergence rate, since the local approximation of the linear operator has the same order as the basis used [4], while the RBF part handles the potential ill-conditioning in purely polynomial approximations [10].

The domain Ω is discretized with N scattered nodes xi with quasi-uniform internodal spacing h. Out of N nodes, Ni are in the interior and Nd on the boundary ∂Ω.

The stencils N(xi) for each node xi are then selected. Commonly a single stencil constitutes of n closest points, including the node itself. Choosing the right stencil size n is far for trivial, however it has been recommended by Bayona [4] to take at least n=2(m+dd) nodes.

In the next step, linear operator L is approximated at nodes xi, using the procedure described in section II-B. For each interior node xi, the equation (Lu)(xi)=f(xi) is approximated by a linear equation

where vectors f and u represent values of function f and unknowns u in stencil nodes of xi. Similarly, for each Dirichlet boundary node xi, we obtain the equation

The behavior of the described solution procedure and its implementation is studied on a Poisson problem with Dirichlet boundary condition. We aim to demonstrate and analyze the p-refined solution procedure, where the order of the approximation method varies throughout the computational nodes in the domain.

where the domain Ω is a d=2 dimensional circle

To fully exploit the advantages of p-refinement, the right hand side f(x) was chosen to have a relatively strong source within the domain at xs=12, i.e.

The Laplacian from f can also be computed as

The domain was filled with N scattered nodes ranging from N=1093 to N=978013. The problem was solved using RBF-FD with PHS augmented with monomials of order m∈{2,4,6}. Stencils for each node were selected by taking n closest nodes where n was determined as recommended by Bayona [4]

Additionally, three different combinations ci of radii r6 and r4 have been used in this paper

All three cases of spatially variable order of the approximation method are also shown in figure 2.

Closed form solution u allows us to compute the accuracy of numerical solution uh. In this paper, the error is evaluated in computational nodes with the infinity norm

The infinity norm is chosen as it is the strictest, but the authors also observed the same behavior using 2-norm or 1-norm.

We compare the convergence rates of unrefined and p-refined numerical solution uh to the problem from section III. Finally, we also study the effect of p-refinement on computational times.

3. We observe that the numerical solutions converge for all chosen augmentation orders m∈{2,4,6}. The expected convergence rate of O(hm) is, however, not reached, but that is to be expected due to the strong source within the computational domain. The convergence curve of a p-refined solution for combination c2 is also added to the figure 3. It is clear that the refined solution convergences at a significantly better convergence rate compared to the convergence rate at m=2, regardless of the fact that the majority of the stencils were still computed using monomials of order m=2. This confirms our beliefs that the biggest contribution to the error comes from the strong source and that the error can be, to some extent, mitigated by locally using a higher order method, i.e. p-refinement.

In this section an overview of the total computational times is provided. All computations were performed on a single core of a computer with AMD EPYC 7702 64-Core processor and 512GB of DDR4 memory. Code was compiled using g++ (GCC) 9.3.0 for Linux with -O3 -DNDEBUG flags. The sparse system is solved using the Pardiso solver on a single thread.

A p-refinement procedure the RBF-FD meshless method is presented, where the order of the local approximation is spatially variable. We employed RBF-FD using PHS augmented with monomials of different degrees to solve a Poisson problem with a strong source within the computational domain. It is shown that p-refinement can improve the convergence rates at a very small cost to execution time, and much faster, that using a method with a higher global order of convergence.

However, observations show that the p-refinement has its limitations. In some cases, specially with local strong sources, the local description of the considered field is just not sufficient to provide good local approximations of linear differential operators. Therefore a plan is to combine the benefits of p-refinement with spatially variable nodal distributions, to provide better approximations around critical areas within the domain. This is also known as hp-refinement, and presents a major step towards hp-adaptivity.