In this letter, we consider a dual-hop cooperative network assisted by multiple reconfigurable intelligent surfaces (RISs). Assuming that the RIS with the highest instantaneous end-to-end signal-to-noise ratio (SNR) is selected to aid the communication, the outage probability (OP) and average sum-rate are investigated. Specifically, an exact analysis for the OP is developed. In addition, relying on the extreme value theory, closed-form expressions for the asymptotic OP and asymptotic sum-rate are derived, based on which the capacity scaling law is established. Our results are corroborated through simulations and insightful discussions are provided. In particular, our analysis shows that the number of RISs as well as the number of reflecting elements play a crucial role in the capacity scaling law of multiple RIS-aided cooperative networks. Also, comparisons with relay-aided systems are carried out to demonstrate that the proposed system setup outperforms relaying schemes both in terms of the OP and average sum-rate. 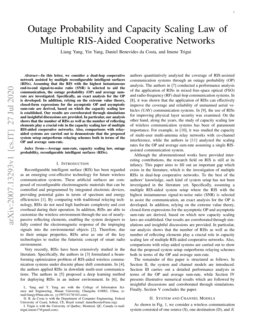 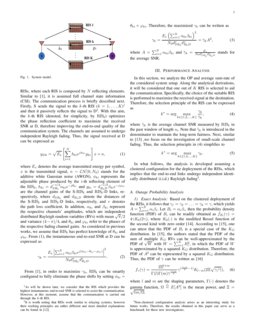 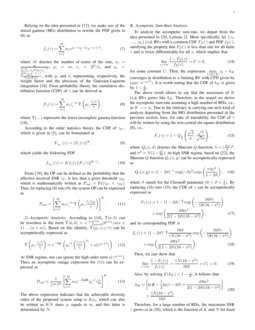 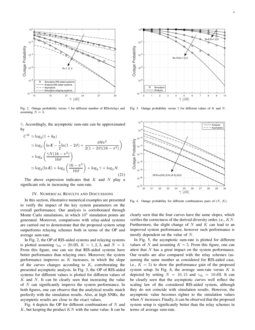 Reconfigurable intelligent surface (RIS) has been regarded as an emerging cost-effective technology for future wireless communication systems. These artificial surfaces are composed of reconfigurable electromagnetic materials that can be controlled and programmed by integrated electronic devices, providing potential gains in terms of spectrum and energy efficiencies [1]. By comparing with traditional relaying technology, RISs do not need high hardware complexity and cost overhead during their operation. In addition, RISs are able to customize the wireless environment through the use of nearly-passive reflecting elements, enabling the system designers to fully control the electromagnetic response of the impinging signals into the environmental objects [2]. Therefore, due to their unique properties, RISs arise as one of the key technologies to realize the futuristic concept of smart radio environment.

Although the aforementioned works have provided interesting contributions, the research field on RIS is still at its infancy. This paper aims to fill out an important gap which exists in the literature, which is the investigation of multiple RISs in dual-hop cooperative networks. To the best of the authors’ knowledge, such kind of system setup has not been investigated in the literature yet. Specifically, assuming a multiple RIS-aided system setup where the RIS with the highest instantaneous signal-to-noise ratio (SNR) is selected to assist the communication, an exact analysis for the OP is developed. In addition, relying on the extreme value theory, closed-form expressions for the asymptotic OP and asymptotic sum-rate are derived, based on which new capacity scaling laws are established. Our results are corroborated through simulations and insightful discussions are provided. In particular, our analysis shows that the number of RISs as well as the number of reflecting elements play a crucial role in capacity scaling law of multiple RIS-aided cooperative networks. Also, comparisons with relay-aided systems are carried out to show that the proposed system setup outperforms relaying schemes both in terms of the OP and average sum-rate.

The remainder of this paper is structured as follows. In Section II, the system and channel models are introduced. Section III carries out a detailed performance analysis in terms of the OP and average sum-rate, while Section IV presents illustrative numerical results which are followed by insightful discussions and corroborated through simulations. Finally, Section V concludes the paper.

As shown in Fig. 1, we consider a wireless communication system consisted of one source (S), one destination (D), and K RISs, where each RIS is composed by N reflecting elements. Similar to [1], it is assumed full channel state information (CSI). The communication process is briefly described next. Firstly, S sends the signal to the k-th RIS (k=1,…,K)111

k-th RIS. and then it passively reflects the signal to D222It is worth noting that RISs work similar to relaying systems, however their working principles are rather different and more detailed explanations can be found in [12].. With this aim, the k-th RIS (denoted, for simplicity, by RIS\emphk) optimizes the phase reflection coefficient to maximize the received SNR at D, therefore improving the end-to-end quality of the communication system. The channels are assumed to undergo independent Rayleigh fading. Thus, the signal received at D can be expressed as

where Es denotes the average transmitted energy per symbol, x is the transmitted signal, n∼CN(0,N0) stands for the additive white Gaussian noise (AWGN), ϕki represents the adjustable phase produced by the i-th reflecting element of the RIS\emphk, hki=d−v/2SRkαkie−jθki and gki=d−v/2RkDβkie−jφki are the channel gains of the S-RIS\emphk and RIS\emphk-D links, respectively, where dSRk and dRkD denote the distances of the S-RIS\emphk and RIS\emphk-D links, respectively, and v denotes the path loss coefficient. In addition, αki and βki

(4−π)/4, and θki and φki refer to the phases of the respective fading channel gains. As considered in previous works, we assume that RIS\emphk has perfect knowledge of θki and φki. From (1), the instantaneous end-to-end SNR at D can be expressed as

From [1], in order to maximize γk, RIS\emphk can be smartly configured to fully eliminate the phase shifts by setting ϕki=θki+φki. Therefore, the maximized γk can be written as

In this section, we analyze the OP and average sum-rate of the considered system setup. Along the analytical derivations, it will be considered that one out of K RIS is selected to aid the communication. Specifically, the choice of the suitable RIS is performed to maximize the received signal at the destination. Therefore, the selection principle of the RIS can be expressed as

where ~γk is the average channel SNR measured by RIS\emphk in the past window of length st. Note that ~γk is introduced in the denominator to maintain the long-term fairness. Next, similar to [13] ,we focus on the investigation of small-scale channel fading. Thus, the selection principle in (4) simplifies to

In what follows, the analysis is developed assuming a clustered configuration for the deployment of the RISs, which implies that the end-to-end links undergo independent identically distributed (i.i.d.) Rayleigh fading333Non-clustered configuration analysis arises as an interesting study for future works. Therefore, the results obtained in this paper can serve as a benchmark for these new investigations..

Based on the clustered deployment of the RISs, it follows that γ1=γ2=…=γk=γ, which yields A=∑Ni=1αiβi. Let Bi=αiβi

, then the probability density function (PDF) of

where l and m are the shaping parameters, Γ(⋅) denotes the gamma function, Ω△=E[A2] is the mean power, and Ξ=√lm/Ω.

Relying on the idea presented in [17], we make use of the mixed gamma (MG) distribution to rewrite the PDF given in (6) as

representing, respectively, the weight factor and the abscissas of the Gaussian-Laguerre integration [18]. From probability theory, the cumulative distribution function (CDF) of

γ can be derived as

According to the order statistics theory, the CDF of γk∗, which is given in (5), can be formulated as

which yields the following PDF

From [19], the OP can be defined as the probability that the effective received SNR γk∗ is less than a given threshold γth, which is mathematically written as Pout=Pr(γk∗<γth). Thus, by replacing (8) into (9), the system OP can be expressed as

At SNR regime, one can ignore the high order term o(γρi+1). Thus, an asymptotic outage expression for (11) can be expressed as

The above expression indicates that the achievable diversity order of the proposed system setup is Kρi, which can also be written as KN since ρi equals to m, and this latter is determined by N.

To analyze the asymptotic sum-rate, we depart from the idea presented in [20, Lemma 2]. More specifically, let {z1, …, zK} i.i.d. RVs with a common CDF FZ(⋅) and PDF fZ(⋅), satisfying the property that FZ(⋅) is less than one for all finite z and is twice differentiable for all z, which implies that

for some constant C. Then, the expression max1≤k≤Kzk−hK converges in distribution to a limiting RV with CFD given by exp(−e−\emphx/C). It is worth noting that the CDF of hK is given by 1−1K.

The above result allows to say that the maximum of K i.i.d. RVs grows like hK. Therefore, in the sequel we derive the asymptotic sum-rate assuming a high number of RISs, i.e., as K⟶∞. Due to the intricacy in carrying out such kind of analysis departing from the MG distribution presented in the previous section, here, for sake of tractability, the CDF of γ

will be written by using the non-central chi-square distribution [6], i.e.,

where ϑ stands for the Chernoff parameter (0<ϑ<12). By replacing (16) into (15), the CDF of γ can be asymptotically expressed as

and its corresponding PDF is

Then, we can show that

Therefore, for a large number of RISs, the maximum SNR γ grows as in (20), which is the function of K and N for fixed ¯γ. Accordingly, the asymptotic sum-rate can be approximated by

The above expression indicates that K and N play a significant role in increasing the sum-rate.

In this section, illustrative numerical examples are presented to verify the impact of the key system parameters on the overall performance. Our analysis is corroborated through Monte Carlo simulations, in which 105 simulation points are generated. Moreover, comparisons with relay-aided systems are carried out to demonstrate that the proposed system setup outperforms relaying schemes both in terms of the OP and average sum-rate.

In Fig. 2, the OP of RIS-aided systems and relaying systems is plotted assuming γth=20dB, K=1,2,3, and N=3. From this figure, one can see that RIS-aided systems have better performance than relaying ones. Moreover, the system performance improves as K increases, in which the slope of the curves changes according to K

K and N. It can be clearly seen that increasing the value of N can significantly improve the system performance. In both figures, one can observe that the analytical results match perfectly with the simulation results. Also, at high SNRs, the asymptotic results are close to the exact values.

Fig. 4 depicts the OP for different combinations of N and K, but keeping the product KN with the same value. It can be clearly seen that the four curves have the same slopes, which verifies the correctness of the derived diversity order, i.e., KN. Furthermore, the slight change of N and K can lead to an improved system performance, however such performance is mostly dependent on the value of N.

In Fig. 5, the asymptotic sum-rate is plotted for different values of N and assuming K=5. From this figure, one can attest that N has a great impact on the system performance. Our results are also compared with the relay schemes (assuming the same number as considered for RIS-aided case, i.e., K=5) to show the performance gain of the proposed system setup. In Fig. 6, the average sum-rate versus K is depicted by setting N=10,15 and γth=10dB. It can be clearly seen that the asymptotic curves well reflect the scaling law of the considered RIS-aided system, although they do not coincide with simulation results. However, the asymptotic value becomes tighter to the simulation values when N increases. Finally, it can be observed that the proposed system setup is significantly better than the relay schemes in terms of average sum-rate.

In this work, we investigated dual-hop cooperative network assisted by multiple RISs. Assuming that one of out K RISs (which one having N elements) is selected to add the communication process, an exact analysis for the OP was presented and closed-form expressions for the asymptotic OP and asymptotic sum-rate were derived, based on which the capacity scaling law was determined. Our results showed that the achievable diversity order of the considered system equals to KN. In addition, we have compared the proposed scheme with a DF relay scenario and it is shown that the former one outperforms considerably the latter one both in terms of OP and average sum-rate. Our results are not only novel but can be used as a benchmark for future studies. Potential new works include non-clustered configuration for the RISs’ deployment as well as the proposal of other techniques of RIS selection.