This paper addresses the problem of outage characterization of an ambient backscatter communication system with a pair of passive tag and reader. In particular, an exact expression for the effective channel distribution is derived. Then, the outage probability at the reader is analyzed rigorously. Since the expression contains an infinite sum, a tight truncation error bound has been derived to facilitate precise numerical evaluations. Furthermore, an asymptotic expression is provided for high signal-to-noise ratio (SNR) regime. 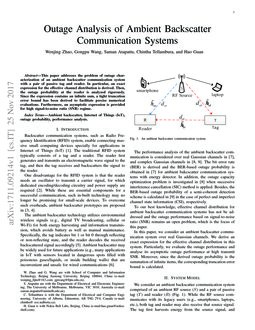 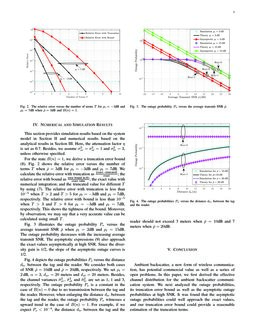 Backscatter communication systems, such as Radio Frequency Identification (RFID) system, enable connecting massive small computing devices specially for applications in Internet of Things (IoT) [1]. The traditional RFID system typically consists of a tag and a reader. The reader first generates and transmits an electromagnetic wave signal to the tag, and then the tag receives and backscatters the signal to the reader.

One disadvantage for the RFID system is that the reader needs an oscillator to transmit a carrier signal, for which dedicated encoding/decoding circuitry and power supply are required [2]. While these are essential components for a successful communication, such in-built technology may no longer be promising for small-scale devices. To overcome such overheads, ambient backscatter prototypes are proposed in [3, 4].

The ambient backscatter technology utilizes environmental wireless signals (e.g., digital TV broadcasting, cellular or Wi-Fi) for both energy harvesting and information transmission, which avoids battery as well as manual maintenance. Specifically, the tag indicates bit 1 or bit 0 through reflecting or non-reflecting state, and the reader decodes the received backscattered signal accordingly [5]. Ambient backscatter may be widely used for future applications (e.g., many applications in IoT with sensors located in dangerous spots filled with poisonous gases/liquids, or inside building walls) that are inconvenient and unsafe for wired communications [6].

The performance analysis of the ambient backscatter communication is considered over real Gaussian channels in [7], and complex Gaussian channels in [8, 9]. The bit error rate (BER) is derived and the BER-based outage probability is obtained in [7] for ambient bakcscatter communication systems with energy detector. In addition, the outage capacity optimization problem is investigated in [8] when successive interference cancellation (SIC) method is applied. Besides, the BER-based outage probability of a semi-coherent detection scheme is calculated in [9] in the case of perfect and imperfect channel state information (CSI), respectively.

To our best knowledge, effective channel distribution for ambient backscatter communication systems has not be addressed and the outage performance based on signal-to-noise ratio (SNR) remains an open problem, which is the focus of this paper.

In this paper, we consider an ambient backscatter communication system over real Gaussian channels. We derive an exact expression for the effective channel distribution in this system. Particularly, we evaluate the outage performance and analyse its asymptotic outage performance at high transmit SNR. Moreover, since the derived outage probability is the summation of infinite items, the corresponding truncation error bound is calculated.

We consider an ambient backscatter communication system comprised of an ambient RF source (S) and a pair of passive tag (T) and reader (R) (Fig. 1). While the RF source communicates with its legacy users (e.g., smartphones, laptops, etc.), both tag and reader may also receive that source signal. The tag first harvests energy from the source signal, and then communicates with the reader via ambient backscatter. Particularly, the tag can backscatter or consume the energy of the received signal to represent two states “1” or “0” for the reader, respectively [5].

The fading channels of S−R, S−T, and T−R links are denoted as ~hsr, ~hst and ~htr

, respectively, which are real Gaussian random variables (RVs) distributed as

are channel variances. Further, the corresponding distances are

dsr, dst and dtr, respectively. Without loss of generality, we consider time instance n. The signal received at the tag can be given as

where s(n) is the source signal with the average power P, and α is the path-loss exponent. The signal backscattered by the tag can be written as

where w(n) is the additive white Gaussian noise (AWGN) at the reader with zero mean and σ2w variance, and h is the effective channel gain which can be given for two states as

We first derive the probability density function (PDF) of the effective channel,

fh(x), which can be given as

The receive SNR at the reader is ρ=Ph2σ2w=¯ρh2 where ¯ρ=Pσ2w may be the average transmit SNR. With a variable transformation for (5), we can derive the PDF of ρ, fρ(x), as

where the second equality follows as the PDF fh(x) is an even function, i.e., fh(x)=fh(−x).

The outage probability is the probability that the SNR at the reader falls below a certain predetermined threshold ρt. Thus, it can be derived as

Since the outage probability expression for B(n)=1 case in (7) is with an infinite sum, it is a challenge for numerical calculation. We therefore truncate it into a finite number of terms T in order to ensure a given numerical accuracy requirement. Then, we bound the truncation error as

To further investigate the ambient backscatter system, we approximate outage of the reader for large SNR as

The proof is in Appendix -C.

Interestingly, when transmit SNR tends to infinity, we get that the diversity gain is −limSNR→∞logPoutlogSNR=12 for both cases B(n)=0 and B(n)=1. Accordingly, when power is big enough, the outage probability of the reader is inversely proportional to square root of the power.

The distribution of any real Gaussian channel hab∈{hsr,hst,hrt} is

where Kα(⋅) is the modified Bessel function of the second kind [10].

Since the two random variables hsr and ξ are independent, the distribution fh(x) is the convolution of fhsr(x) and fξ(x). Therefore, we can obtain

On the basis of (7), the truncation error ϵ(T) with the number of terms T can be bounded as

We then consider the lowest exponent for 1/¯ρ, i.e., the indies k=0 and j=0. Thereby, when average transmit SNR tends to infinity, namely, ¯ρ→∞, the asymptotic outage probability can be simplified as (9).