Software Defined Networking (SDN) offers flexibility to program a network based on a set of network requirements. Programming the networks using SDN is not completely straightforward because a programmer must deal with low level details. To solve the problem, researchers proposed a set of network programming languages that provide a set of high level abstractions to hide low level hardware details. Most of the proposed languages provide abstractions related to packet processing and flows, and still require a programmer to specify low-level match-action fields to configure and monitor a network. Recently, in an attempt to raise the level at which programmers work, researchers have begun to investigate Intent-based, descriptive northbound interfaces. The work is still in early stages, and further investigation is required before intent-based systems will be adopted by enterprise networks. To help achieve the goal of moving to an intent-based design, we propose an SDN-based network programming framework, the Open Software Defined Framework (OSDF). OSDF provides a high level Application Programming Interface (API) that can be used by managers and network administrators to express network requirements for applications and policies for multiple domains. OSDF also provides a set of high level network operation services that handle common network configuration, monitoring, and Quality of Service (QoS) provisioning. OSDF is equipped with a policy conflict management module to help a network administrator detect and resolve policy conflicts. The paper shows how OSDF can be used and explains application-based policies. Finally, the paper reports the results of both testbed measurements and simulations that are used to evaluate the framework from multiple perspectives, including functionality and performance. 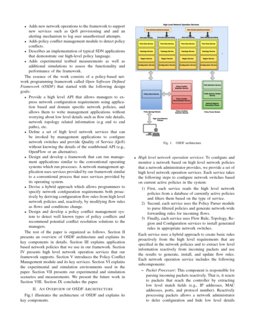 In recent years, Software Defined Networking (SDN) has received attention from both academia and industry for the design of network management systems. SDN provides the ability to program networks directly by breaking the vertical integration of control and data planes[1]. The separation of control and data planes allows network switches to become simple forwarding devices and gives us flexibility to control and program them by implementing the control logic in a centralized SDN controller using software called a Network Operating System (NOS)[2]. In the current SDN paradigm, SDN controllers compromises three key layers including data plane, control plane, and application layers. Most of the SDN controllers employ two Application Programming Interfaces (APIs) called the Northbound and Southbound APIs. Network applications use northbound APIs to communicate with the controller, express network behaviors, define configuration requirements, and program forwarding devices. Southbound APIs define the communication protocols between the controller and network devices. The OpenFlow protocol [3] defines a well-known and especially prominent southbound API, used by a SDN controller to update and insert flow rules that specify associated actions to be performed for each of the flows that pass through a given network device. Most of the SDN controllers provide a simplified northbound API, such as a RESTful API, that can be used to program network devices by specifying the details of flow rules using JSON or XML formats. With such an interface, a programmer must parse JSON or XML formats to retrieve required information (e.g., network topology, statistics, and parameters) which can then be used to program network devices. Although some SDN controllers provide high level services to make the network programming easier, a programmer still needs to deal with low level flow rule details.

Although, there is no standard Northbound Interface (NBI) for SDN controllers [4, 5], adopting an intent-based interfaces for SDN seems promising. An Intent NBI is independent of a specific network technology, and uses application related vocabulary and information. An Intent NBI provides abstractions that hide low level details of the network objects and services, and can be used by users to express their intents in a descriptive manner instead of a prescriptive manner. In addition, an Intent NBI can be used to express expectations regarding the service controller will deliver. Work has begun on intent based NBIs, including the ONOS intent framework [6] and NEMO [7]. However, further investigation of intent-based NBIs is warranted. In this paper, we attempt to answer some of the questions surrounding the intent-based approach, including:

This paper is an extension an earlier work-in-progress paper [8]. The previous paper introduced the main modules of the framework and reported preliminary simulation results. Our main contributions in this paper are:

The essence of the work consists of a policy-based network programming framework called Open Software Defined Framework (OSDF) that started with the following design goals:

The rest of the paper is organized as follows. Section II presents an overview of OSDF architecture and explains its key components in details. Section III explains application based network policies that we use in our framework. Section IV presents high level network operation services that our framework supports. Section V introduces the Policy Conflict Management module and its key services. Section VI explains the experimental and simulation environments used in the paper. Section VII presents our experimental and simulation scenarios and measurements. We present the future work in Section VIII. Section IX concludes the paper.

Ii An Overview of OSDF Architecture

Fig.1 illustrates the architecture of OSDF and explains its key components.

We illustrate the packet processing and flow rule installation steps in Fig.2.

An application-based network policy specifies high level network requirements for a given application (type of packet). The policies are used to configure and monitor network devices. We divide all policies into two major categories: intra-domain policies (inside a region or a site) and inter-domain policies (among multiple regions or sites). An application policy includes the following key items:

The syntax of OSDF policy language is defined in Fig.3.

In the initial prototype version of the framework we define a minimum set of high level network operations to support typical network configurations:

I , we categorize some of well known network policy conflicts based on application based network policies and explain them as follows:

This service implements a policy conflict recommendation algorithm to provide high level advice about how an administrator can resolve the conflicts between current policies in the system. Each type of conflict is resolved as follows:

The asymptotic time complexity of the policy conflict recommendation algorithm is O(n2) where n is the number of polices being considered. Most practice, n is small because a single policy covers a broad range of network configurations.

An early version of OSDF is implemented in Open Network Operating System (ONOS) [11], an open source SDN controller which like other SDN controllers, provides services and APIs that programmers use to write applications and modules inside ONOS. We use ONOS APIs, such as the topology and flow rule APIs, to implement each network operation. Other modules, such as the policy parser, policy store, and policy conflict detection modules, have been implemented from scratch. To evaluate OSDF from multiple perspectives such as functionality and performance, we use both experimental measurement and simulation. For experimental results, we deployed an SDN testbed which we explain its details as follows:

Our SDN testbed consists of 10 Ethernet switches that logically define 5 sites (departments of an organization) that are connected together as Fig.4 illustrates. To make our testbed emulate an enterprise network, each physical switch is logically divided into 10 independent smaller switches using virtualized mode. Each site is a Fat-tree network topology. The connections between virtual switches are 1GB links and we aggregate 1GB links to connect sites, thereby emulating high capacity links. Overall, our network consists of 50 virtual switches and more than 130 links.

In addition to an SDN testbed, we used the Mininet [12] network emulator to evaluate our framework at a larger scale. We ran Mininet on a Linux host with a Intel Core i7 processor and 8GB RAM.

To generate various traffic patterns, we used iperf [13], a tool for measuring throughput on IP networks.

To test our framework from functional and performance points of view, and to examine the effects of scale, we ran simulation scenarios.

Our project is in the first phases of the development and we plan to complete it by introducing new high level network operation services and new features. Some of our main goals are:

This paper presents an SDN-based network programming framework which is called OSDF. OSDF provides a set of high level network service operations that can be invoked by management applications for network configuration and monitoring. OSDF uses a high-level approach that allows a network administrator to enter high level network policies into the system without specifying any details about low level match-action fields. When a packet arrives, OSDF reactively examines policies, derives the required low-level flow rules, and installs flow entries in network switches along the path the packet will take. One of our key contributions is that we provide a higher level of abstractions than previous network programming languages. Our system allows a manager to specify application requirements without giving layer 2 and 3 packet header fields. OSDF is equipped with a policy conflict management module that examines a set of policies, detects conflicts, and uses a conflict resolution algorithm to provide high level suggestions to the network administrator about ways to resolve the conflicts. We used OSDF to implement typical SDN applications such as an Inbound Traffic Engineering system, Inter-domain rate limiting, and Traffic Isolation. OSDF also can be used to implement other SDN applications such as firewall, application specific peering, intra-domain rate limiting. In addition, we optimized flow rule installation by installing all of the required flow rules for a path when the first packet for the path arrives at a controller. Our simulation results show that the optimization reduces the negative impact of reactive part on the response time.