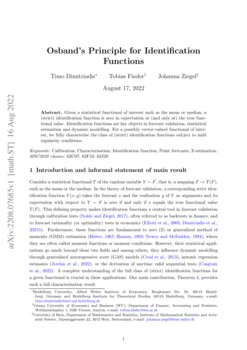 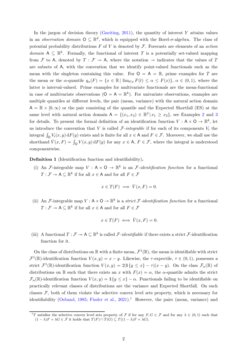 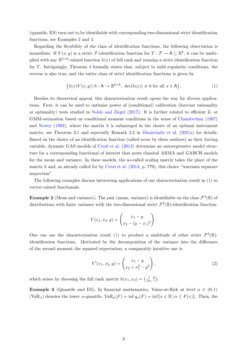 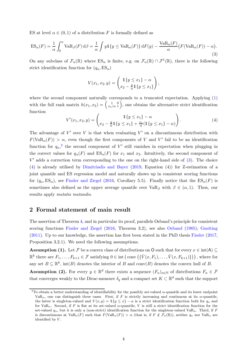 Order-Sensitivity and Equivariance of Scoring Functions

A functional is elicitable (identifiable) if it is the unique minimiser ...
Tobias Fissler, et al. ∙

Parameter estimation via M- and Z-estimation is broadly considered to be...
Timo Dimitriadis, et al. ∙

This paper is concerned with a two-fold objective. Firstly, we establish...
Tobias Fissler, et al. ∙

We introduce a new notion of regularity of an estimator called median re...
Arun Kumar Kuchibhotla, et al. ∙

of the random variable

Y∼F, that is, a mapping F↦T(F), such as the mean or the median. In the theory of forecast validation, a corresponding strict identification function V(x,y) takes the forecast x and the realisation y of Y as arguments and its expectation with respect to Y∼F is zero if and only if x equals the true functional value T(F). This defining property makes identification functions a central tool in forecast validation through calibration tests (NoldeZiegel2017), often referred to as backtests in finance, and to forecast rationality (or optimality) tests in economics (EKT2005; DimiPattonSchmidt2019)

. Furthermore, these functions are fundamental to zero (Z) or generalised method of moments (GMM) estimation

(Huber1967; Hansen1982; NeweyMcFadden1994), where they are often called moment functions or moment conditions. However, their statistical applications go much beyond these two fields and among others, they influence dynamic modelling through generalised autoregressive score (GAS) models (Creal2013), isotonic regression estimates (JordanMuehlemannZiegel2019), or the derivation of anytime valid sequential tests (casgrain2022anytime). A complete understanding of the full class of (strict) identification functions for a given functional is crucial in these applications. Our main contribution, Theorem 4, provides such a full characterisation result.

In the jargon of decision theory (Gneiting2011), the quantity of interest Y attains values in an observation domain O⊆Rd, which is equipped with the Borel-σ

F of Y is denoted by F. Forecasts are elements of an action domain A⊆Rk. Formally, the functional of interest T is a potentially set-valued mapping from F to A, denoted by T:F↠A, where the notation ↠ indicates that the values of T are subsets of A, with the convention that we identify point-valued functionals such as the mean with the singleton containing this value. For O=A=R, prime examples for T are the mean or the α

qα(F)={x∈R|limt↑xF(t)≤α≤F(x)}, α∈(0,1), where the latter is interval-valued. Prime examples for multivariate functionals are the mean-functional in case of multivariate observations (O=A=Rk

). For univariate observations, examples are multiple quantiles at different levels, the pair (mean, variance) with the natural action domain

A=R×[0,∞) or the pair consisting of the quantile and the Expected Shortfall (ES) at the same level with natural action domain A={(x1,x2)∈R2|x1≥x2}, see Examples 2 and 3 for details. To present the formal definition of an identification function V:A×O→Rk, let us introduce the convention that V is called F-integrable if for each of its components Vi the integral ∫OVi(x,y)dF(y) exists and is finite for all x∈A and F∈F. Moreover, we shall use the shorthand ¯V(x,F)=∫OV(x,y)dF(y) for any x∈A, F∈F, where the integral is understood componentwise.

On the class of distributions on R with a finite mean, F1(R), the mean is identifiable with strict F1(R)-identification function V(x,y)=x−y. Likewise, the τ-expectile, τ∈(0,1), possesses a strict F1(R)-identification function V(x,y)=2|1{y≤x}−τ|(x−y). On the class Fα(R) of distributions on R such that there exists an x with F(x)=α, the α-quantile admits the strict Fα(R)-identification function V(x,y)=1{y≤x}−α. Functionals failing to be identifiable on practically relevant classes of distributions are the variance and Expected Shortfall. On such classes F, both of them violate the selective convex level sets property, which is necessary for identifiability (Osband1985; FisslerHlavinovaRudloff2019Theory).111T satisfies the selective convex level sets property of F if for any F,G∈F and for any λ∈(0,1) such that (1−λ)F+λG∈F it holds that T(F)∩T(G)⊆T((1−λ)F+λG). However, the pairs (mean, variance) and (quantile, ES) turn out to be identifiable with corresponding two-dimensional strict identification functions, see Examples 2 and 3.

Besides its theoretical appeal, this characterisation result opens the way for diverse applications. First, it can be used to optimise power of (conditional) calibration (forecast rationality or optimality) tests studied in NoldeZiegel2017. It is further related to efficient Z- or GMM-estimation based on conditional moment conditions in the sense of Chamberlain1987 and Newey1993, where the matrix h is submerged in the choice of an optimal instrument matrix; see Theorem 3.1 and especially Remark 3.2 in DFZ2020 for details. Based on the choice of an identification function (called score by these authors) as their forcing variable, dynamic GAS models of Creal2013

determine an autoregressive model structure for a corresponding functional of interest that nests classical ARMA and GARCH models for the mean and variance. In these models, the so-called scaling matrix takes the place of the matrix

h and, as already called for by Creal2013, this choice “warrants separate inspection”.

The following examples discuss interesting applications of our characterisation result in (1) to vector-valued functionals.

The pair (mean, variance) is identifiable on the class F2(R) of distributions with finite variance with the two-dimensional strict F2(R)-identification function

One can use the characterisation result (1) to produce a multitude of other strict F2(R)-identification functions. Motivated by the decomposition of the variance into the difference of the second moment the squared expectation, a comparably intuitive one is

In financial mathematics, Value-at-Risk at level α∈(0,1) (VaRα) denotes the lower α-quantile, VaRα(F)=infqα(F)=inf{x∈R|α≤F(x)}. Then, the ES at level α∈(0,1) of a distribution F is formally defined as

On any subclass of Fα(R) where ESα is finite, e.g. on Fα(R)∩F1(R), there is the following strict identification function for (qα,ESα)

where the second component naturally corresponds to a truncated expectation. Applying (1) with the full rank matrix h(x1,x2)=(10x1/α1), one obtains the alternative strict identification function

The advantage of V′ over V is that when evaluating V′ on a discontinuous distribution with F(VaRα(F))>α, even though the first components of V and V′ fail to be an identification function for qα,222 To obtain a better understanding of identifiability for the possibly set-valued α-quantile and its lower endpoint VaRα, one can distinguish three cases. First, if F is strictly increasing and continuous at its α-quantile, the latter is singleton-valued and V(x,y)=1{y≤x}−α is a strict identification function both for qα and for VaRα. Second, if F is flat at its set-valued α-quantile, V is still a strict identification function for the set-valued qα, but it is only a (non-strict) identification function for the singleton-valued VaRα. Third, if F is discontinuous at VaRα(F) such that F(VaRα(F))>α (that is, if F∉Fα(R)), neither qα nor VaRα are identified by V. the second component of V′ still vanishes in expectation when plugging in the correct values for qα(F) and ESα(F) for x1 and x2. Intuitively, the second component of V′ adds a correction term corresponding to the one on the right-hand side of (3). The choice (4) is already utilised by DimiBayer2019 for Z-estimation of a joint quantile and ES regression model and naturally shows up in consistent scoring functions for (qα,ESα), see FisslerZiegel2016. Finally notice that the ESα(F) is sometimes also defined as the upper average quantile over VaRβ with β∈(α,1). Then, our results apply mutatis mutandis.

The assertion of Theorem 4, and in particular its proof, parallels Osband’s principle for consistent scoring functions FisslerZiegel2016, see also Osband1985; Gneiting2011. Up to our knowledge, the assertion has first been stated in the PhD thesis Fissler2017. We need the following assumptions.

For every y∈Rd there exists a sequence (Fn)n∈N of distributions Fn∈F that converges weakly to the Dirac-measure δy and a compact set K⊂Rd such that the support of Fn is contained in K for all n.

Suppose that for Lebesgue almost all x∈int(A) the maps V(x,⋅) and V′(x,⋅) are locally bounded. Moreover, suppose that the complement of the set

Assumptions (1), (2), and (3) basically correspond to Assumptions (V1), (F1), and (VS1) in FisslerZiegel2016, respectively. Assumption (1) ensures that the class F is sufficiently rich, implying in particular the surjectivity of T onto int(A) and the fact that there are no redundancies in V in the sense that all its components are needed; see Remark 5 for some further comments. Assumptions (2) and (3) ensure that V(x,y) can be approximated by a sequence of integrals ¯V(x,Fn).

Let T:F↠A⊆Rk be a functional with a strict F-identification function V:A×O→Rk. Then the following two assertions hold:

Part (i) is a direct consequence of the linearity of the expectation. For (ii), the proof of the existence of h follows along the lines of Theorem 3.2 in FisslerZiegel2016. One just needs to replace ∇¯S(x,F) with ¯V′(x,F). If V′ satisfies Assumption (1) as well, one directly obtains that h must have full rank on int(A) by exchanging the roles of V and V′. If the expected identification functions are both continuous, the continuity of h follows again exactly like in the proof of Theorem 3.2 in FisslerZiegel2016. For the pointwise assertion (5), consider (x,y)∈int(A)×O such that both V(x,⋅) and V′(x,⋅) are continuous at y. (Due to Assumption (3), this holds for Lebesgue almost all (x,y).) Let (Fn)n∈N⊆F be a sequence as specified in Assumption (2). That is, (Fn)n∈N converges weakly to δy and the supports of all Fn are contained in some compact set K⊂Rd. We claim that ¯V(x,Fn) and ¯V′(x,Fn) converge to V(x,y) and V′(x,y), respectively, providing the arguments for the former convergence only. By Skorohod’s theorem, there is a sequence of random variables (ξn)n∈N

on some probability space with distributions

On the other hand, also the richness, in particular, the convexity of F are needed. Just recall that on the class of symmetric distributions with strictly increasing distribution function, the mean and the median coincide. Hence, both V(x,y)=x−y and V′(x,y)=1{y≤x}−1/2 are strict identification functions, but do not fulfil (5). The reason is that the class of symmetric distributions fails to be convex, unless all distributions have the same mean, in which case the interior of the action domain would be empty under surjectivity.

The latter statement can be exemplified by considering the systemic risk measure CoVaRα|β, which, given a two-dimensional observation (Y1,Y2), it is defined as the VaRα of the conditional distribution of Y2, given that Y1 exceeds its VaRβ. Then, the pair (VaRβ,CoVaRα|β) is identifiable on the class of absolutely continuous distributions with positive density on R2 with a corresponding strict identification function

see FisslerHoga2021. Due to the argument above, the one-dimensional identification function

suggested in Banulescu-RaduETAL2021 cannot be a strict identification function for (VaRβ,CoVaRα|β) on the class of absolutely continuous distributions with positive density, see FisslerHoga2021.

T. Dimitriadis gratefully acknowledges support of the German Research Foundation (DFG) through grant number 502572912 and of the Heidelberg Academy of Sciences and Humanities. J. Ziegel gratefully acknowledges support of the Swiss National Science Foundation. We are very grateful to Jana Hlavinová for a careful proofreading and valuable feedback on an earlier version of this paper.