Identity transformations, used as skip-connections in residual networks, directly connect convolutional layers close to the input and those close to the output in deep neural networks, improving information flow and thus easing the training. In this paper, we introduce two alternative linear transforms, orthogonal transformation and idempotent transformation. According to the definition and property of orthogonal and idempotent matrices, the product of multiple orthogonal (same idempotent) matrices, used to form linear transformations, is equal to a single orthogonal (idempotent) matrix, resulting in that information flow is improved and the training is eased. One interesting point is that the success essentially stems from feature reuse and gradient reuse in forward and backward propagation for maintaining the information during flow and eliminating the gradient vanishing problem because of the express way through skip-connections. We empirically demonstrate the effectiveness of the proposed two transformations: similar performance in single-branch networks and even superior in multi-branch networks in comparison to identity transformations. 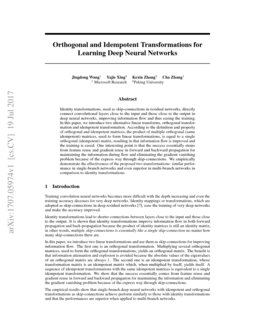 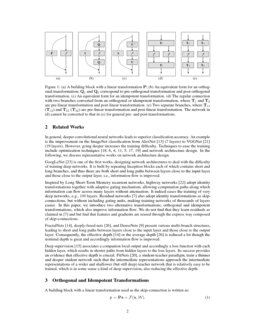 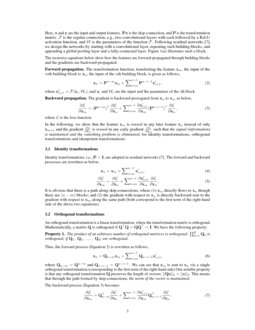 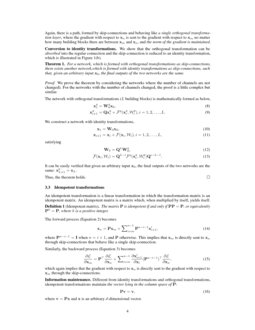 Training convolution neural networks becomes more difficult with the depth increasing and even the training accuracy deceases for very deep networks. Identity mappings or transformations, which are adopted as skip-connections in deep residual networks

HeZRS16 , ease the training of very deep networks and make the accuracy improved.

The empirical results show that single-branch deep neural networks with idempotent and orthogonal transformations as skip-connections achieve perform similarly to those with identity transformations and that the performances are superior when applied to multi-branch networks.

In general, deeper convolutional neural networks leads to superior classification accuracy. An example is the improvement on the ImageNet classification from AlexNet

GoogLeNet SzegedyLJSRAEVR15 is one of the first works, designing network architectures to deal with the difficulty of training deep networks. It is built by repeating Inception blocks each of which contains short and long branches, and thus there are both short and long paths between layers close to the input layer and those close to the output layer, i.e., information flow is improved.

srivastava2015training adopt identity transformations together with adaptive gating mechanism, allowing computation paths along which information can flow across many layers without attenuation. It indeed eases the training of very deep networks, e.g., 100 layers. Residual networks HeZRS16 also adopt identity transformations as skip-connections, but without including gating units, making training networks of thousands of layers easier. In this paper, we introduce two alternative transformations, orthogonal and idempotent transformations, which also improve information flow. We do not find that they learn residuals as claimed in HeZRS16 and but find that features and gradients are reused through the express way composed of skip-connections.

FractalNets LarssonMS16a , deeply-fused nets WangWZZ16 , and DenseNets HuangLW16a present various multi-branch structures, leading to short and long paths between layers close to the input layer and those close to the output layer. Consequently, the effective depth LarssonMS16a or the average depth WangWZZ16 is reduced a lot though the nominal depth is great and accordingly information flow is improved.

associates a companion local output and accordingly a loss function with each hidden layer, which results in shorter paths from hidden layers to the loss layers. Its success provides an evidence that effective depth is crucial. FitNets

RomeroBKCGB14 , a student-teacher paradigm, train a thinner and deeper student network such that the intermediate representations approach the intermediate representations of a wider and shallower (but still deep) teacher network that is relatively easy to be trained, which is in some sense a kind of deep supervision, also reducing the effective depth.

A building block with a linear transformation used as the skip-connection is written as:

Here, x and y are the input and output features. Px is the skip-connection, and P is the transformation matrix. F

is the regular connection, e.g., two convolutional layers with each followed by a ReLU activation function, and

W is the parameters of the function F. Following residual networks HeZRS16 , we design the networks by starting with a convolutional layer, repeating such building blocks, and appending a global pooling layer and a fully-connected layer. Figure 1 illustrates such a block.

The recursive equations below show how the features are forward-propagated through building blocks and the gradients are backward-propagated.

where x′i+1=F(xi,Wi), and xi and Wi are the input and the parameters of the ith block.

Backward propagation. The gradient is backward-prorogated from xn to xm as below,

where L is the loss function.

Identity transformations, i.e., P=I, are adopted in residual networks HeZRS16 . The forward and backward processes are rewritten as below,

Thus, the forward process (Equation 2) is rewritten as follows,

preserves the length of vectors:

∥Qx∥2=∥x∥2. This means that through the path formed by skip-connections, the norm of the vector is maintained.

The network with orthogonal transformations (L building blocks) is mathematically formed as below,

We construct a network with identity transformations,

It can be easily verified that given an arbitrary input x0, the final outputs of the two networks are the same: xpL+1=xL.

The matrix P is idempotent if and only if PP=P, or equivalently Pk=P, where k is a positive integer.

where Pn−i−1=I when n=i+1, and P otherwise. This implies that xm is directly sent to xn through skip-connections that behave like a single skip-connection.

where v=Px and x is an arbitrary d-dimensional vector.

Apparently, when a vector ¯v lies in the null space of the column space, i.e., P¯v=0, it looks that the skip connections do not help to improve information flow. Considering another term in the right-hand side of Equation 14,

we can find W, if F is formed by convolutional layers and ReLU layers, such that

which means that there is a path along which the information does not vanish. Vanishing is still possible though rare, e.g., in the case Px+F(x,W) lies in the null space of P. There is similar analysis for gradient maintenance.

Diagonalization. It is known that an idempotent matrix is diagonalizable: P=U−1ΛU, where Λ is a diagonal matrix whose diagonal entries are 0 or 1 and U is invertible. We illustrate it in Figure 1. A network containing L blocks formed with idempotent transformations written as follows,

can be transferred to a network with skip connections formed by linear transformations whose transformation matrix is a diagonal matrix Λ composed of 0 and 1:

Feature reuse. We have generalized identity transformations to orthogonal transformations and idempotent transformations, to eliminate information vanishing and explosion. One point we want to make clearer is that Equations 4, 6 and 14 (for forward propagation) hold for any xm, m=1,2,…,n−1. In other words, xn reuses all the previous features: x1,x2,…,xn−1 rather than only xn−1. We have similar observation on gradient reuse.

The multi-branch networks have been studied in many recent works AbdiN16 ; TargAL16 ; XieGDTH16 ; ZhaoWLTZ16 . We study the application of the two linear transformations to multi-branch structures.

: We first zero-pad the images with

4 pixels on each side, and then randomly crop them to produce 32×32

images, followed by horizontally mirroring half of the images. We normalize the images by using the channel means and standard deviations.

Networks. The network starts with a 3×3 convolutional layer, 3 stages, where each stage contains K building blocks and there are two downsampling layers, and a global pooling layer followed by a fully-connected layer outputting the classification result.

In our experiments, we consider 3 kinds of regular connections forming building blocks: (a) single branch, (b) 4

which is a block matrix containing B×B blocks with B being the number of branches, and each block is an identity matrix. The second one is obtained by subtracting PMR from the identity matrix:

which is named as Idempotent-CMR (c=complement). The ranks of the two matrices are RB and R−RB, where R is the size of the matrix or the total number of channels.

. Our implementation is based on Keras and TensorFlow

Single-branch. We compare four skip-connections: Identity transformation, Idempotent-CMR, Orthogonal-TP and Orthogonal-Random. To form the idempotent matrix for Idempotent-CMR, we set B to be the number of the channels, i.e., PMR is a matrix with all entries being 1B. We do not evaluate Idempotent-MR because in this case its rank is only 1, whose performance is expected to be low. In general, idempotent transformations with lower ranks perform worse than those with higher ranks. This is empirically verified in Figure 2.

Depth-wise. We evaluate the performance over extreme multi-branch networks: depth-wise networks, where each branch only contains a single channel. Table 3 shows the results. One can see that the comparison is consistent to the 4-branch case.

We introduce two linear transformations, orthogonal and idempotent transformations, which, we show theoretically and empirically, behave like identity transformations, improving information flow and easing the training. One interesting point is that the success stems from feature and gradient reuse through the express way composed of skip-connections, for maintaining the information during flow and eliminating the gradient vanishing problem.