We derive oracle results for discrete image denoising with a total variation penalty. We consider the least squares estimator with a penalty on the ℓ^1-norm of the total discrete derivative of the image. This estimator falls into the class of analysis estimators. A bound on the effective sparsity by means of an interpolating matrix allows us to obtain oracle inequalities with fast rates. The bound is an extension of the bound by Ortelli and van de Geer [2019c] to the two-dimensional case. We also present an oracle inequality with slow rates, which matches, up to a log-term, the rate obtained for the same estimator by Mammen and van de Geer [1997]. The key ingredient for our results are the projection arguments to bound the empirical process due to Dalalyan et al. [2017]. 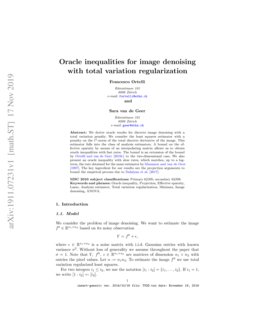 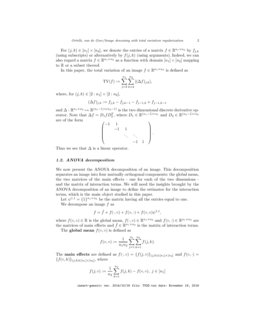 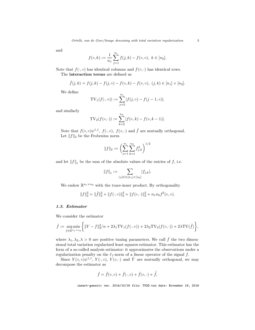 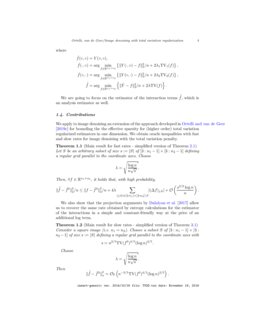 We study the analysis estimator directly, without any step through a syn...
Francesco Ortelli, et al. ∙

We consider the problem of image denoising. We want to estimate the image f0∈Rn1×n2 based on its noisy observation

is a noise matrix with i.i.d. Gaussian entries with known variance

σ2. Without loss of generality we assume throughout the paper that σ=1. Note that Y, f0, ϵ∈Rn1×n2 are matrices of dimension n1×n2 with entries the pixel values. Let n:=n1n2. To estimate the image f0 we use total variation regularized least squares.

In this paper, the total variation of an image f∈Rn1×n2 is defined as

Thus we see that Δ is a linear operator.

We decompose an image f as

The global mean f(∘,∘) is defined as

Let ∥f∥2 be the Frobenius norm

and let ∥f∥1 be the sum of the absolute values of the entries of f, i.e.

We consider the estimator

where λ1,λ2,λ>0 are positive tuning parameters. We call ^f the two dimensional total variation regularized least squares estimator. This estimator has the form of a so-called analysis estimator: it approximates the observations under a regularization penalty on the ℓ1-norm of a linear operator of the signal f.

We are going to focus on the estimator of the interaction terms ^~f, which is an analysis estimator as well.

, it holds that, with high probability,

We also show that the projection arguments by Dalalyan et al. (2017) allow us to recover the same rate obtained by entropy calculations for the estimator of the interactions in a simple and constant-friendly way at the price of an additional log term.

A criterion to divide the previous theoretical contributions in the field of image denoising with total variation regularization is the way in which total variation in two dimensions is defined.

In this paper we are going to consider the discrete case, where an image is a matrix of pixels f∈Rn1×n2. For the discrete case, by replacing derivatives by discrete differences, we find the following counterparts to the definitions of total variation provided above for the continuous case.

For the first approach, much work has been done. Sadhanala et al. (2016) derive minimax rates, which, for large n:=n1n2 and under the canonical scaling TVG≍n1/2, are of order √log(n)/n . Hütter and Rigollet (2016) derive sharp oracle inequalities, that result in the rate logn/√n\vrule height 6.999893pt depth -5.599915pt width 1px. The work by Wang et al. (2016) renders a rate of order n−4/5TV4/5G (neglecting log terms), which under the canonical scaling TVG≍n1/2 (s. Sadhanala et al. (2016)), would result in an upper bound of order n−2/5. Lastly, the very recent work by Chatterjee and Goswami (2019) focuses on the constrained optimization problem and a tuning-free version thereof. For a certain f0 they obtain a rate faster than the minimax rate. Their approach, as the one of the work for higher order total variation regularization (Guntuboyina et al. (2017)), is based on bounding Gaussian widths of tangent cones.

In our latest work (Ortelli and van de Geer (2019c)), we derived oracle inequalities with fast rates by bounding the weighted weak compatibility constant introduced by Dalalyan et al. (2017). We want to apply the same approach here to obtain an oracle inequality with fast rates for the two dimensional total variation regularized estimator as defined by Mammen and van de Geer (1997).

Using oracle inequalities with slow rates, we also match (up to log terms) the rate obtained in Mammen and van de Geer (1997) by entropy calculations, which is n−3/5TV(f0)4/5. This is the last missing piece in our attempt to derive nonasymptotic counterparts of the theoretical guarantees on the mean squared error of the total variation regularized estimators handled in Mammen and van de Geer (1997).

We will assume throughout the paper that we have i.i.d. Gaussian errors with unit variance. For the case of unknown variance, Ortelli and van de Geer (2019b) show how to simultaneously estimate the signal and the variance of the noise by extending the idea of the square root lasso (Belloni et al. (2011)) to analysis estimators.

The synthesis formulation of the two dimensional total variation regularized estimator expresses a matrix f as linear combination of dictionary matrices, such that the penalty is the ℓ1-norm of (a subset of) the coefficients of the dictionary matrices. Here the notation with arguments instead of subscripts comes in handy. Consider some f∈Rn1×n2. We may write for j∈[n1] and k∈[n2],

We thus note that

The next lemma, which is based on Lemma 1.3, gives us a synthesis form of the estimator for the interaction terms ~^f.

One may think of S as being the active set of the interactions of some “oracle" approximation of f0. We refer to the elements of S as (interaction) jump locations. The cardinality of S is denoted by s:=|S| and the coordinates of a jump location tm are denoted by (t1,m,t2,m), m=1,…,s. Note that we require that 2<t1,m<n1 and 2<t2,m<n2. This assumption ensures that we have no boundary effects when doing partial integration, see Corollary 2.7.

Given S, we can partition [2:n1]×[2:n2] into s subsets, subset m consisting of the points closest to tm, m=1,…,s. This corresponds to a Voronoi tessellation. The natural metric here would be the city block metric. However, a Voronoi tessellation typically has subsets of relatively irregular shape. We will require that the partition consists of rectangles. Indeed, a partition consisting of rectangles will ease the construction of an interpolating matrix, which is our tool to bound the effective sparsity (Theorem 2.1) and to obtain an oracle inequality with fast rates. The concepts interpolating matrix and effective sparsity are presented in Section 2.2.

In this section we present the main result: an oracle inequality for the estimator ^~f of the interactions ~f0.

For all t>0 we define

Theorem 2.1 is an application of Theorem 4.4 in Ortelli and van de Geer (2019c). The work goes mainly into establishing a bound for quantity Γ2(S,v−S,qS), the so-called “effective sparsity" which we define in Section 2.2. It depends on S, on the weights v−S and on a sign pattern qS. The weights are given in (2).

and we may take

The definition for effective sparsity is as in Ortelli and van de Geer (2019c), but formulated in matrix (instead of vector) form.

For completeness, we give the matrix version of Lemma 4.2 in Ortelli and van de Geer (2019c).

where the minimum is over all interpolating matrices w(qS) for the sign configuration qS.

Let f∈Rn1×n2 be arbitrary and let qS be a sign configuration. Then