In this paper, we study the problem of delay minimization in NFV-based networks. In such systems, the ultimate goal of any request is to compute a sequence of functions in the network, where each function can be computed at only a specific subset of network nodes. In conventional approaches, for each function, we choose one node from the corresponding subset of the nodes to compute that function. In contrast, in this work, we allow each function to be computed in more than one node, redundantly in parallel, to respond to a given request. We argue that such redundancy in computation not only improves the reliability of the network, but would also, perhaps surprisingly, reduce the overall transmission delay. In particular, we establish that by judiciously choosing the subset of nodes which compute each function, in conjunction with a linear network coding scheme to deliver the result of each computation, we can characterize and achieve the optimal end-to-end transmission delay. In addition, we show that using such technique, we can significantly reduce the transmission delay as compared to the conventional approach. In some scenarios, such reduction can even scale with the size of the network. More precisely, by increasing the number of nodes that can compute the given function in parallel by a multiplicative factor, the end-to-end delay will also decrease by the same factor. Moreover, we show that while finding the subset of nodes for each computation, in general, is a complex integer program, approximation algorithms can be proposed to reduce the computational complexity. In fact, for the case where the number of computing nodes for a given function is upper-bounded by a constant, a dynamic programming scheme can be proposed to find the optimum subsets in polynomial times. Our numerical simulations confirm the achieved gain in performance in comparison with conventional approaches. 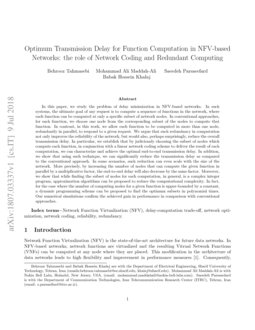 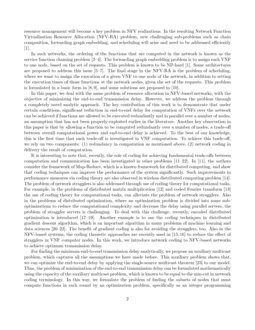 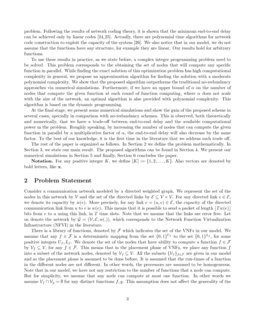 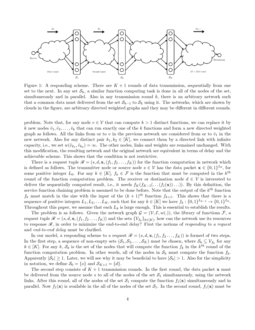 Optimization of ARQ Distribution for HARQ Strategies in Delay-Bounded Networks

We explore the role of interaction for the problem of reliable computati...
Seiyun Shin, et al. ∙

How to Distribute Computation in Networks