Over-the-air computation (AirComp) is an efficient solution to enable federated learning on wireless channels. AirComp assumes that the wireless channels from different devices can be controlled, e.g., via transmitter-side phase compensation, in order to ensure coherent on-air combining. Intelligent reflecting surfaces (IRSs) can provide an alternative, or additional, means of controlling channel propagation conditions. This work studies the advantages of deploying IRSs for AirComp systems in a large-scale cloud radio access network (C-RAN). In this system, worker devices upload locally updated models to a parameter server (PS) through distributed access points (APs) that communicate with the PS on finite-capacity fronthaul links. The problem of jointly optimizing the IRSs' reflecting phases and a linear detector at the PS is tackled with the goal of minimizing the mean squared error (MSE) of a parameter estimated at the PS. Numerical results validate the advantages of deploying IRSs with optimized phases for AirComp in C-RAN systems. 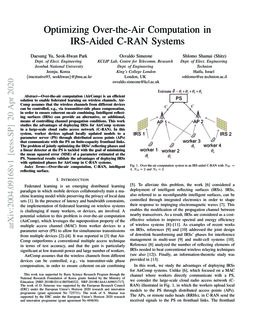 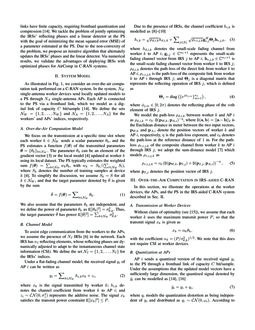 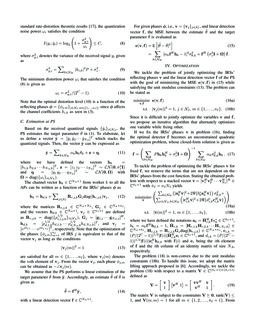 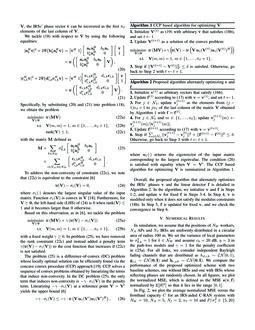 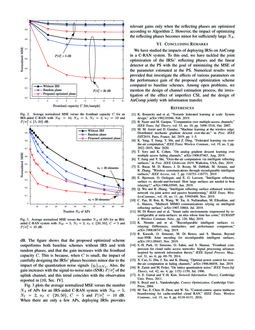 Intelligent Reflecting Surface vs. Decode-and-Forward: How Large Surfaces Are Needed to Beat Relaying?

The rate and energy efficiency of wireless channels can be improved by d...
Emil Björnson, et al. ∙

[1]. In the presence of latency and bandwidth constraints, the implementation of federated learning on wireless systems is challenging if many workers, or devices, are involved. A potential solution to this problem is over-the-air computation (AirComp), which leverages the superposition property of the multiple access channel (MAC) from worker devices to a parameter server (PS) to allow for simultaneous transmissions from multiple devices [2, 3, 4]. It was reported in [3] that AirComp outperforms a conventional multiple access technique in terms of test accuracy, and that the gain is particularly significant at low transmit power and large number of workers.

AirComp assumes that the wireless channels from different devices can be controlled, e.g., via transmitter-side phase compensation, in order to ensure coherent on-air combining [5]. To alleviate this problem, the work [6] considered a deployment of intelligent reflecting surfaces (IRSs). IRSs, also referred to as reconfigurable intelligent surfaces, can be controlled through integrated electronics in order to shape their response to impinging electromagnetic waves [7]. This enables the modification of the propagation channel between nearby transceivers. As a result, IRSs are considered as a cost-effective solution to improve spectral and energy efficiency of wireless systems [8, 9, 10, 11]. As examples of recent works on IRSs, references [9] and [10] addressed the joint design of downlink beamforming and IRSs’ phases for interference management in multi-user [9] and multi-cell systems [10]. Reference [8] analyzed the number of reflecting elements of IRSs needed to beat conventional wireless relaying techniques (see also [12]). Finally, an information-theoretic study was provided in [13].

In this work, we study the advantages of deploying IRSs for AirComp systems. Unlike [6], which focused on a MAC channel where workers directly communicate with a PS, we consider the large-scale cloud radio access network (C-RAN) illustrated in Fig. 1, in which the workers upload local models to the PS through distributed access points (APs). The APs, or remote radio heads (RRHs), in C-RAN send the received signals to the PS on fronthaul links. The fronthaul links have finite capacity, requiring fronthaul quantization and compression [14]. We tackle the problem of jointly optimizing the IRSs’ reflecting phases and a linear detector at the PS with the goal of minimizing the mean squared error (MSE) of a parameter estimated at the PS. Due to the non-convexity of the problem, we propose an iterative algorithm that alternately updates the IRSs’ phases and the linear detector. Via numerical results, we validate the advantages of deploying IRSs with optimized phases for AirComp in C-RAN systems.

As illustrated in Fig. 1, we consider an over-the-air computation task performed on a C-RAN system. In the system, NW single-antenna worker devices send locally updated models to a PS through NA single-antenna APs. Each AP is connected to the PS via a fronthaul link, which we model as a digital link of capacity C bit/sample [14]. We define the sets NW={1,2,…,NW} and NA={1,2,…,NA} for the workers’ and APs’ indices, respectively.

We focus on the transmission at a specific time slot where each worker k∈NW sends a scalar parameter θk, and the PS estimates a function f(θ) of the transmitted parameters θ={θk}k∈NW. The parameter θk

can be an element of the gradient vector

[3] or the local model [4] updated at worker k using its local dataset. The PS typically estimates the weighted sum f(θ)=∑k∈NWwkθk, with wk=Sk/(∑l∈NWSl), where Sk denotes the number of training samples at device k [4]. To simplify the discussion, we assume Sk=S for all k∈NW, and that the target parameter denoted by ¯θ is given by the sum

We also assume that the parameters θk are independent, and we define the power of parameter θk as E[|θk|2]=σ2θ,k. Thus, the target parameter ¯θ has power E[|¯θ|2]=∑k∈NWσ2θ,k.

To assist edge communication from the workers to the APs, we assume the presence of NI IRSs [6] in the network. Each IRS has nI reflecting elements, whose reflecting phases are dynamically adjusted to adapt to the instantaneous channel state information (CSI). We define the set NI={1,2,…,NI} for the IRSs’ indices.

Under a flat-fading channel model, the received signal yi of AP i can be written as

where xk is the signal transmitted by worker k; hi,k denotes the channel coefficient from worker k to AP i; and zi∼CN(0,σ2z) represents the additive noise. The signal xk satisfies the transmit power constraint E[|xk|2]≤P.

where ϕj,m∈[0,2π) denotes the reflecting phase of the mth element of IRS j.

where pI,j denotes the position vector of IRS j.

In this section, we illustrate the operations at the worker devices, the APs, and the PS in the IRS-aided C-RAN system described in Sec. II.

Without claim of optimality (see [15]), we assume that each worker k uses the maximum transmit power P, so that the transmit signal xk is given as

with the coefficient αk=(P/σ2θ,k)1/2. We note that this does not require CSI at worker devices.

AP i sends a quantized version of the received signal yi to the PS through a fronthaul link of capacity C bit/sample. Under the assumptions that the updated model vectors have a sufficiently large dimension, the quantized signal denoted by ^yi can be modelled as [14, 16]

denotes the variance of the received signal

Note that the optimal distortion level (10) is a function of the reflecting phases ϕ={ϕj,m}j∈NI,m∈{1,…,nI}, since ϕ affects the channel coefficients hi,k as seen in (3).

Based on the received quantized signals {^yi}i∈NA, the PS estimates the target parameter ¯θ in (1). To elaborate, let us define a vector ^y=[^y1^y2⋯^yNA]T which stacks the quantized signals. Then, the vector ^y can be expressed as

are satisfied for all m∈{1,…,nI}, where vj(m) denotes the mth element of vj. From the vector vj, each phase ϕj,m can be obtained as −∠vj(m).

We assume that the PS performs a linear estimation of the target parameter ¯θ from ^y. Accordingly, an estimate ^¯θ of ¯θ is given as

with a linear detection vector f∈CNA×1.

For given phases ϕ, i.e., v={vj}j∈NI, and linear detection vector f, the MSE between the estimate ^¯θ and the target parameter ¯θ is evaluated as

We tackle the problem of jointly optimizing the IRSs’ reflecting phases v and the linear detection vector f of the PS with the goal of minimizing the MSE e(v,f) in (15) while satisfying the unit modulus constraints (13). The problem can be stated as

Since it is difficult to jointly optimize the variables v and f, we propose an iterative algorithm that alternately optimizes one variable while fixing other.

If we fix the IRSs’ phases v in problem (16), finding the optimal detector f becomes an unconstrained quadratic optimization problem, whose closed-form solution is given as

To tackle the problem of optimizing the IRSs’ phases v for fixed f, we remove the terms that are not dependent on the IRSs’ phases from the cost function. Stating the obtained problem with respect to a stacked vector ¯v=[vH1vH2⋯vHNI]H∈C¯nI×1 with ¯nI=nINI yields

th column of an identity matrix of size

The problem (18) is non-convex due to the unit modulus constraints (18b). To handle this issue, we adopt the matrix lifting approach proposed in [6]. Accordingly, we tackle the problem (18) with respect to a matrix V∈C(¯nI+1)×(¯nI+1) defined as

We tackle (18) with respect to V by using the following equalities:

with the matrix M defined as

To address the non-convexity of constraint (22c), we note that (22c) is equivalent to the constraint [6]

denotes the largest singular value of the input matrix. Function

Based on this observation, as in [6], we tackle the problem

with a fixed weight γ≥0. In problem (25), we have removed the rank constraint (22c) and instead added a penalty term γ(tr(V)−σ1(V)) to the cost function that increases if (22c) is not satisfied.

The problem (25) is a difference-of-convex (DC) problem whose locally optimal solution can be efficiently found via the concave convex procedure (CCP) approach [19]. CCP solves a sequence of convex problems obtained by linearizing the terms that induce non-convexity. In the DC problem (25), the only term that induces non-convexity is −γ⋅σ1(V) in the penalty term. Linearizing −γ⋅σ1(V) at a reference point V=V′ yields the upper bound [6]

returns the eigenvector of the input matrix corresponding to the largest eigenvalue. The condition (

26) is satisfied with equality when V=V′. The CCP based algorithm for optimizing V is summarized in Algorithm 1.

Overall, the proposed algorithm that alternately optimizes the IRSs’ phases v and the linear detector f is detailed in Algorithm 2. In the algorithm, we initialize v and f in Steps 1-2, and update v for fixed f in Steps 3-4. In Step 4, v is modified only when it does not satisfy the modulus constraints (18b). In Step 5, f is updated for fixed v, and we check the convergence in Step 6.

In simulation, we assume that the positions of NW workers, NA APs and NI

IRSs are uniformly distributed in a circular area of radius 100 m. We set the variance of local parameters to

σ2θ,k=1 for k∈NW and assume c0=20 dB, η=3 in the path-loss models and γ=1 for the penalty coefficient in (25a). For all links, we consider independent Rayleigh fading channels that are distributed as hd,i,k∼CN(0,1), gi,j∼CN(0,I) and hr,j,k∼CN(0,I). We compare the performance of the proposed optimized scheme with two baseline schemes, one without IRSs and one with IRSs whose reflecting phases are randomly chosen. In all figures, we plot the normalized MSE, which is defined as the MSE e(v,f) normalized by E[|¯θ|2] so that it lies in the range [0,1].

In Fig. 2, we plot the average normalized MSE versus the fronthaul capacity C for an IRS-aided C-RAN system with NW=10, NA=5, NI=2, nI=10 and P/σ2z∈{5,20} dB. The figure shows that the proposed optimized scheme outperforms both baseline schemes without IRS and with random phases, and that the gain increases with the fronthaul capacity C. This is because, when C is small, the impact of carefully designing the IRSs’ phases becomes minor due to the impact of the quantization noise signals {qi}i∈NA

. Also, the gain increases with the signal-to-noise ratio (SNR)

P/σ2z of the uplink channel, and this trend coincides with the observation reported in [10, Sec. IV].

Fig. 3 plots the average normalized MSE versus the number NA of APs for an IRS-aided C-RAN system with NW=5, NI=2, nI∈{20,50}, C=5 and P/σ2z=10 dB. When there are only a few APs, deploying IRSs provides relevant gains only when the reflecting phases are optimized according to Algorithm 2. However, the impact of optimizing the reflecting phases becomes minor for sufficiently large NA.

We have studied the impacts of deploying IRSs on AirComp in a C-RAN system. To this end, we have tackled the joint optimization of the IRSs’ reflecting phases and the linear detector at the PS with the goal of minimizing the MSE of the parameter estimated at the PS. Numerical results were provided that investigate the effects of various parameters on the performance gain of the proposed optimization scheme compared to baseline schemes. Among open problems, we mention the design of channel estimation process, the investigation of the effect of imperfect CSI, and the design of AirComp jointly with information transfer.