Non-orthogonal multiple access (NOMA) has been considered as a promising solution for improving the spectrum efficiency of next-generation wireless networks. In this paper, the performance of a p-persistent slotted ALOHA system in support of NOMA transmissions is investigated. Specifically, wireless users can choose to use high or low power for data transmissions with certain probabilities. To achieve the maximum network throughput, an analytical framework is developed to analyze the successful transmission probability of NOMA and long term average throughput of users involved in the non-orthogonal transmissions. The feasible region of the maximum number of concurrent users using high and low power to ensure successful NOMA transmissions are quantified. Based on the analysis, an algorithm is proposed to find the optimal transmission probabilities for users to choose high and low power to achieve the maximum system throughput. In addition, the impact of power settings on the network performance is further investigated. Simulations are conducted to validate the analysis. 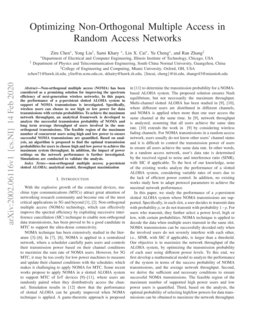 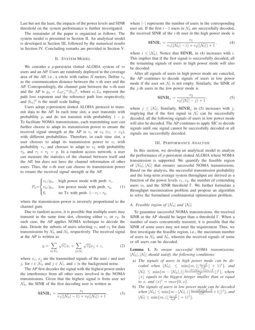 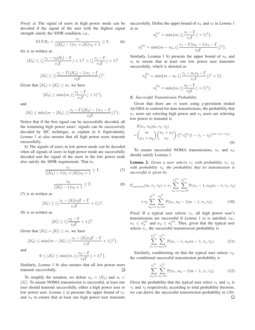 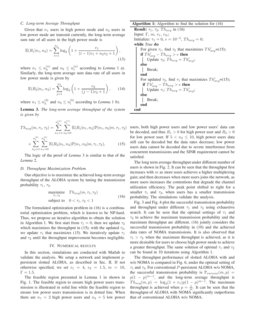 We consider a multiple-access channel where the users are powered from b...
Rajshekhar Vishweshwar Bhat, et al. ∙

We consider a multiple-access channel where the users are powered from b...
Rajshekhar Vishweshwar Bhat, et al. ∙

On the Fairness Performance of NOMA-based Wireless Powered Communication Networks

With the explosive growth of the connected devices, machine type communications (MTCs) attract great attention of networking research community and become one of the most critical applications in 5G and beyond [5, 2]. Non-orthogonal multiple access (NOMA) technology, which can effectively improve the spectral efficiency by exploiting successive interference cancellation (SIC) technique to enable non-orthogonal data transmissions, has been proved to be a good candidate in MTC to support the ultra-dense connectivity.

NOMA technique has been extensively studied in the literature [8, 7, 10, 11]. In [6, 1], NOMA is applied in a centralized network, where a scheduler carefully pairs users and controls their transmission power based on their channel conditions to maximize the sum rate of NOMA users. However, for 5G MTC, it may be too costly for low power machines to measure and update their channel conditions with the scheduler, which makes it challenging to apply NOMA for MTC. Some recent works propose to apply NOMA in a slotted ALOHA system to support MTC of IoT devices [3, 12, 4], where users are randomly paired when they distributively access the channel. Simulation results in [9] show that the performance of slotted ALOHA can be greatly improved when NOMA technique is applied. A game-theoretic approach is proposed in [4] to determine the transmission probability for a NOMA-based ALOHA system. The proposed solution ensures Nash equilibrium, but not necessarily the maximum throughput. Multi-channel slotted ALOHA has been studied in [12, 3], where different users are distributed in different channels, and NOMA is applied when more than one user access the same channel at the same time. In [3], network throughput is analyzed, assuming that all users achieve the same data rate. [12] extends the work in  [3] by considering wireless fading channels. For NOMA transmissions in a random access network, users usually do not know other users’ channel status and it is difficult to control the transmission power of users to ensure all users achieve the same data rate. In other words, in a random access network, user’s data rate is determined by the received signal to noise and interference ratio (SINR), with SIC if applicable. To the best of our knowledge, none of the existing works analyze the performance of a slotted ALOHA system, considering variable rates of users due to the lack of efficient power control. In addition, no existing works study how to adapt protocol parameters to achieve the maximal network performance.

In this paper, we study the performance of a p-persistent slotted ALOHA system where NOMA transmissions are supported. Specifically, in each slot, a user decides to transmit data with probability p, or do not transmit with probability 1−p. For users who transmit, they further select a power level, high or low, with certain probabilities. NOMA technique is applied to decode the data when multiple users transmit in the same slot. NOMA transmissions can be successfully decoded only when the involved users do not severely interfere with each other, i.e., SINR, with SIC if applicable, is larger than a threshold. Our objective is to maximize the network throughput of the ALOHA system, by optimizing the transmission probability of each user using different power levels. To this end, we first develop a mathematical model to analyze the performance of the system in terms of the success probability of NOMA transmissions, and the average network throughput. Second, we derive the sufficient and necessary conditions to ensure successful NOMA transmissions. The feasible region of the maximum number of supported high power users and low power users is quantified. Third, based on the analysis, the optimal probability of selecting high/low powers for data transmissions can be obtained to maximize the network throughput. Last but not the least, the impacts of the power levels and SINR threshold on the system performance is further investigated.

We consider a p-persistent slotted ALOHA system of m users and an AP. Users are randomly deployed in the coverage area of the AP, i.e., a circle with radius R meters. Define rn as the communication distance between the n-th user and the AP. Correspondingly, the channel gain between the n-th user and the AP is gn=L0r−αn|hn|2, where α,L0 represent the path loss exponent and the reference path loss respectively, and |hn|2 is the small scale fading.

where the transmission power is inversely proportional to the channel gain.

Due to random access, it is possible that multiple users may transmit in the same time slot, choosing either v1 or v2. In such case, the AP applies NOMA technique to decode the data. Denote the subsets of users selecting v1 and v2 for data transmissions by Nh and Nl, respectively. The received signal at the AP is written as

where xi, xj are the transmitted signals of the user i and user j, for i∈Nh and j∈Nl, and z is the background noise.

The AP first decodes the signal with the highest power under the interference from all other users involved in the NOMA transmissions. Given that the highest signal is from user set Nh, the SINR of the first decoding user is written as

where |⋅| represents the number of users in the corresponding user set. If the first i−1 users in Nh are successfully decoded, the received SINR of the i-th user in the high power mode is

where i≤|Nh|. Notice that SINRi in (4) increases with i. This implies that if the first signal is successfully decoded, all the remaining signals of users in high power mode will also be decoded.

In this section, we develop an analytical model to analyze the performance of p-persistent slotted ALOHA where NOMA transmission is supported. We quantify the feasible region of |Nh|,|Nl| that ensures successful NOMA transmissions. Based on the analysis, the successful transmission probability and the long-term average system throughput are derived as a function of the power levels v1,v2, the number of contending users m, and the SINR threshold Γ

To guarantee successful NOMA transmissions, the received SINR at the AP should be larger than a threshold Γ. When a number of users concurrently transmit, it is possible that the SINR of some users may not meet the requirement. Thus, we first investigate the feasible region, i.e., the maximum number of users in Nh and Nl, wherein the received signals of some or all users can be decoded.

a) The signal of users in high power mode can be decoded if the signal of the user with the highest signal strength satisfy the SINR condition, i.e.,

Similarly, Lemma 1 b) presents the upper bound of nh and nl to ensure that at least one low power user transmits successfully, which is denoted as

Similarly, conditioning on that the typical user selects v2, the conditional successful transmission probability is

Given the probability that the typical user select v1 and v2 is τ1 and τ2 respectively, according to total probability theorem, we can derive the successful transmission probability in (2).

where n1≤n(a)h and n2≤n(a)l according to Lemma 1 a). Similarly, the long-term average sum data rate of all users in low power mode is given by

The long-term average throughput of the system is given by

The logic of the proof of Lemma 3 is similar to that of the Lemma 2.

Our objective is to maximize the achieved long-term average throughput of the ALOHA system by tuning the transmission probability τ1, τ2.

The formulated optimization problem in (16) is a combinatorial optimization problem, which is known to be NP-hard. Thus, we propose an iterative algorithm to obtain the solution in Algorithm 1. We first start from τ1=0, then we update τ2 which maximizes the throughput in (3); with the updated τ2, we update τ1 that maximizes (3). We iteratively update τ1 and τ2 until the throughput improvement becomes negligible.

In this section, simulations are conducted with Matlab to validate the analysis. We setup a network and implement p-persistent slotted ALOHA, as described in Sec. II. If not otherwise specified, we set v1=4, v2=1.5, m=10, Γ=1.5.

The long term average throughput under different number of users is shown in Fig. 3. It can be seen that the throughput first increases with m as more users achieves a higher multiplexing gain; and then decreases when more users joins the network, as more users increases the contentions that degrade the channel utilization efficiency. The peak point shifted to right for a smaller τ1 and τ2, when users has a smaller transmission probability. The simulations validate the analysis.

In this paper, we have analyzed the performance of NOMA in a random access network using p-persistent slotted ALOHA. To ensure successful NOMA transmissions, the feasible region of the maximum number of users using high and low power has been derived. To achieve the maximal long-term average throughput, an algorithm is further proposed to find the optimal probabilities using high and low power for data transmissions. The impacts of the transmission powers on long-term average system throughput has been studied as well.

In this work, we optimize the transmission parameters to maximize the system performance, given that the wireless network environment is known by each individual user. In our future work, we will apply learning techniques to allow users to distributively learn the unknown wireless environment to make the optimal decision to maximize the throughput.