Systems based on artificial neural networks (ANNs) have achieved state-of-the-art results in many natural language processing tasks. Although ANNs do not require manually engineered features, ANNs have many hyperparameters to be optimized. The choice of hyperparameters significantly impacts models' performances. However, the ANN hyperparameters are typically chosen by manual, grid, or random search, which either requires expert experiences or is computationally expensive. Recent approaches based on Bayesian optimization using Gaussian processes (GPs) is a more systematic way to automatically pinpoint optimal or near-optimal machine learning hyperparameters. Using a previously published ANN model yielding state-of-the-art results for dialog act classification, we demonstrate that optimizing hyperparameters using GP further improves the results, and reduces the computational time by a factor of 4 compared to a random search. Therefore it is a useful technique for tuning ANN models to yield the best performances for natural language processing tasks. 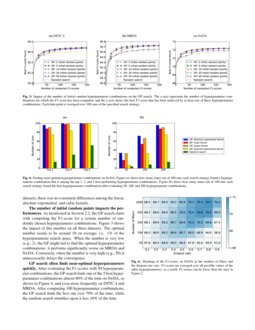 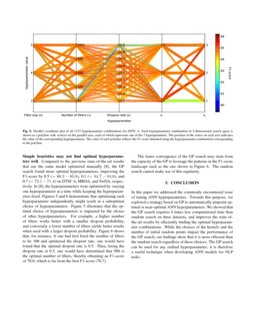 However, ANNs have hyperparameters that need to be tuned in order to achieve the best results. The hyperparameters of ANNs may define either its learning process (e.g., learning rate or mini-batch size) or its architecture (e.g., number of hidden units or layers). ANNs commonly contain over ten hyperparameters [13]

, which makes it challenging to optimize. Therefore, most published ANN-based work on NLP tasks, rely on basic heuristics such as manual or random search, and sometimes do not even optimize hyperparameters.

Although most of them report state-of-the-art results without optimizing hyperparameters extensively, we argue that the results can be further improved by properly optimizing the hyperparameters. Despite this, one of the main reasons why most previous NLP works do not thoroughly optimize hyperparameters is that it may represent a significant time investment. However, if we optimize them “efficiently”, we can find hyperparameters that perform well within a reasonable amount of time as shown in this paper.

Recently, a more systematic approach based on Bayesian optimization with Gaussian process (GP) [16]

has been shown to be effective in automatically tuning the hyperparameters of machine learning algorithms, such as latent dirichlet allocation, SVMs, convolutional neural networks

The ANN model for dialog act classification is introduced in [8] and is briefly described in Section 2.1. The GP used to optimize the hyperparameters of the ANN model is presented in Section 2.2. The colon notation vi:j represents the sequence of vectors vi,vi+1,…,vj.

An utterance of length ℓ is represented as the sequence of word vectors w1:ℓ∈Rm. Given the word vectors, the CNN model produces the utterance representation u∈Rn.

Let h be the size of a filter, and the sequence of vectors v1:h∈Rm be the corresponding filter matrix. A convolution operation on h consecutive word vectors starting from the tth word outputs the scalar feature ct=tanh(∑hi=1vTiwt+i−1+bf), where bf∈R is a bias term.

We perform convolution operations with n different filters, and denote the resulting features as ct∈Rn, each of whose dimensions comes from a distinct filter. Repeating the convolution operations for each window of h consecutive words in the utterance, we obtain c1:ℓ−h+1. The utterance representation u∈Rn is computed in the max pooling layer, as the element-wise maximum of c1:ℓ−h+1.

During training, dropout with probability

p is applied on this utterance representation u.

The filter size h, the number of filters n, and a dropout probability p are the hyperparameters of this section that we optimize using the GP (Section 2.2).

Let ui∈Rn be the utterance representation given by the CNN architecture for the ith utterance in the sequence of length r. The sequence u1:r is input to a two-layer feedforward neural network that classifies each utterance. The hyperparameters d1,d2, the history sizes used in the first and second layers respectively, are optimized using the GP (Section 2.2).

represents the probability distribution over the set of

2.2.1 Comparison with other methods

A grid search is brute-forcefully evaluating f(x) for each x∈X defined on a grid and then selecting the best one. In a random search, one randomly selects an x∈X and evaluates the performance f(x); this process is repeated until an x with a satisfactory f(x) is found. In a manual search, an expert tries out some hyperparameter combinations based on prior experience until settling on a good one.

In contrast with the other methods mentioned above, a GP search chooses the hyperparameter combination to evaluate next by exploiting all previous evaluations. To achieve this, we assume the prior distribution on the function f to be a Gaussian process, which allows us to construct a probabilistic model for f using all previous evaluations, by calculating the posterior distribution in a tractable manner. Once the model for f is computed, it is used to choose an optimal hyperparameter combination to evaluate next.

In a GP search, we use a GP to describe a distribution over functions. A GP is defined as a collection of random variables, any finite number of which have a joint Gaussian distribution. A GP

In our case f(x) is the F1-score on the test set evaluated for the ANN model using the given hyperparameter combination x∈X, which is a 5-dimensional vector consisting of filter size h, number of filters n, dropout rate p, and history sizes d1,d2.

Let X=(x1,…,xq),f=(f(x1)…,f(xq)) and X∗=(xq+1,…,xs),f∗=(f(xq+1)…,f(xs)) be the training inputs and outputs, and test inputs and outputs, respectively. X∪X∗=X, and X∩X∗=∅. Note that f is known, and f∗ is unknown. The goal is to find the distribution of f∗ given X∗,X and f, in order to select among X∗ the hyperparameter combination that is the most likely to yield the highest F1-score.

The joint distribution of

f and f∗ according to the prior is

Conditioning the joint Gaussian prior on the observations yields f∗|X∗,X,f∼N(μ,Σ) where

The choice of the kernel k(x,x′) impacts predictions. We investigate 4 different kernels:

To initialize the GP search, one needs to compute the F1-score for a certain number of randomly chosen hyperparameter combinations r: we investigate what the optimal number is. We then iterate over the following two steps until a specified maximum number of iterations t is reached. First, we find the hyperparameter combination in the test set with the highest F1-score predicted by the GP. Second, we compute the actual F1-score, and move it to the training set. This process is outlined in Algorithm 1.

We evaluate the random and GP searches on the dialog act classification task using the Dialog State Tracking Challenge 4 (DSTC 4) [21, 22], ICSI Meeting Recorder Dialog Act (MRDA) [23, 24], and Switchboard Dialog Act (SwDA) [25] datasets. DSTC 4, MRDA, and SwDA respectively contain 32k, 109k, and 221k utterances, which are labeled with 89, 5, and 43 different dialog acts (we used the 5 coarse-grained dialog acts introduced in [26] for MRDA). The train/test splits are provided along with the datasets, and the validation set was chosen randomly except for MRDA, which specifies a validation set.111See https://github.com/Franck-Dernoncourt/slt2016 for the train, validation, and test splits.

For a given hyperparameter combination, the ANN is trained to minimize the negative log-likelihood of assigning the correct dialog acts to the utterances in the training set, using stochastic gradient descent with the Adadelta update rule

. At each gradient descent step, weight matrices, bias vectors, and word vectors are updated. For regularization, dropout is applied after the pooling layer, and early stopping is used on the validation set with a patience of 10 epochs. We initialize the word vectors with the 300-dimensional word vectors pretrained with word2vec on Google News

Even though the GP search with any kernel choice is faster than the random search, some kernels result in better performance than others. The best kernel choice depends on the choice of the dataset, but the squared exponential kernel (a.k.a. radial basis function kernel) consistently converges more slowly, as illustrated by Figure

5. Across the datasets, there was no consistent differences among the linear, absolute exponential, and cubic kernels.

The number of initial random points impacts the performances. As mentioned in Section 2.2, the GP search starts with computing the F1-score for a certain number of randomly chosen hyperparameter combinations. Figure 9 shows the impact of this number on all three datasets. The optimal number seems to be around 10 on average, i.e. 1% of the hyperparameter search space. When the number is very low (e.g., 2), the GP might fail to find the optimal hyperparameter combinations: it performs significantly worse on MRDA and SwDA. Conversely, when the number is very high (e.g., 50) it unnecessarily delays the convergence.

The faster convergence of the GP search may stem from the capacity of the GP to leverage the patterns in the F1-score landscape such as the one shown in Figure 15. The random search cannot make use of this regularity.

In this paper we addressed the commonly encountered issue of tuning ANN hyperparameters. Towards this purpose, we explored a strategy based on GP to automatically pinpoint optimal or near-optimal ANN hyperparameters. We showed that the GP search requires 4 times less computational time than random search on three datasets, and improves the state-of-the-art results by efficiently finding the optimal hyperparameter combinations. While the choices of the kernels and the number of initial random points impact the performance of the GP search, our findings show that it is more efficient than the random search regardless of these choices. The GP search can be used for any ordinal hyperparameter; it is therefore a useful technique when developing ANN models for NLP tasks.