We provide a simple method for improving the performance of the recently introduced learned Bloom filters, by showing that they perform better when the learned function is sandwiched between two Bloom filters. 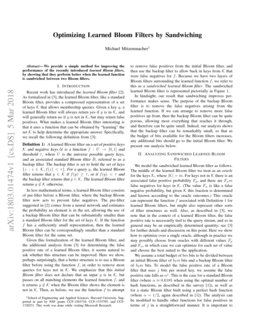 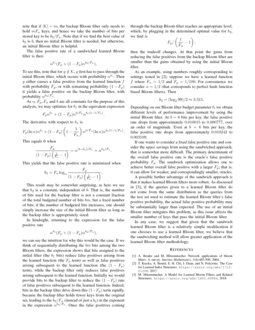 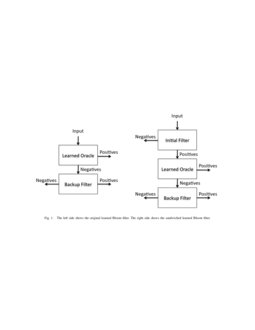 comes from a neural network and estimates the probability an element is in the set, allowing the use of a backup Bloom filter that can be substantially smaller than a standard Bloom filter for the set of keys

K. If the function f has a sufficiently small representation, then the learned Bloom filter can be correspondingly smaller than a standard Bloom filter for the same set.

In hindsight, our result that sandwiching improves performance makes sense. The purpose of the backup Bloom filter is to remove the false negatives arising from the learned function. If we can arrange to remove more false positives up front, then the backup Bloom filter can be quite porous, allowing most everything that reaches it through, and therefore can be quite small. Indeed, our analysis shows that the backup filter can be remarkably small, so that as the budget of bits available for the Bloom filters increases, any additional bits should go to the initial Bloom filter. We present our analysis below.

We model the sandwiched learned Bloom filter as follows. The middle of the learned Bloom filter we treat as an oracle for the keys K, where |K|=m. For keys not in K there is an associated false positive probability Fp, and there are Fnm false negatives for keys in K. (The value Fn is like a false negative probability, but given K this fraction is determined and known according to the oracle outcomes.) This oracle can represent the function f associated with Definition 1 for learned Bloom filters, but might also represent other sorts of filter structures as well. Also, as described in [3], we note that in the context of a learned Bloom filter, the false positive rate is necessarily tied to the query stream, and so in general may be an empirically determined quantity; see [3] for further details and discussion on this point. Here we show how to optimize over a single oracle, although in practice we may possibly choose from oracles with different values Fp and Fn, in which case we can optimize for each set of value and choose the best suited to the application.

As α,Fp,Fn and b are all constants for the purpose of this analysis, we may optimize for b1 in the equivalent expression

The derivative with respect to b1 is

This yields that the false positive rate is minimized when

In hindsight, returning to the expression for the false positive rate

then the tradeoff changes. At that point the gains from reducing the false positives from the backup Bloom filter are smaller than the gains obtained by using the initial Bloom filter.

As an example, using numbers roughly corresponding to settings tested in [2], suppose we have a learned function f where Fn=1/2 and Fp=1/100. For convenience we consider α=1/2 (that corresponds to perfect hash function based Bloom filters). Then