The SpeakerBeam-FE (SBF) method is proposed for speaker extraction. It attempts to overcome the problem of unknown number of speakers in an audio recording during source separation. The mask approximation loss of SBF is sub-optimal, which doesn't calculate direct signal reconstruction error and consider the speech context. To address these problems, this paper proposes a magnitude and temporal spectrum approximation loss to estimate a phase sensitive mask for the target speaker with the speaker characteristics. Moreover, this paper explores a concatenation framework instead of the context adaptive deep neural network in the SBF method to encode a speaker embedding into the mask estimation network. Experimental results under open evaluation condition show that the proposed method achieves 70.4 improvement over the SBF baseline on signal-to-distortion ratio (SDR) and perceptual evaluation of speech quality (PESQ), respectively. A further analysis demonstrates 69.1 proposed method for different and same gender mixtures. 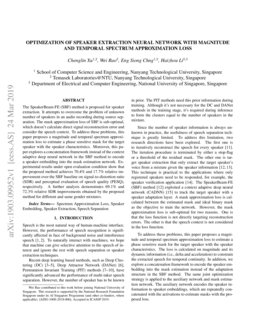 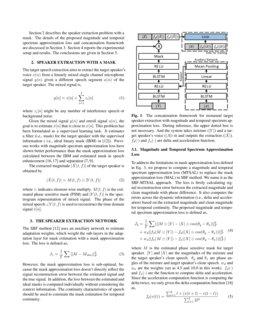 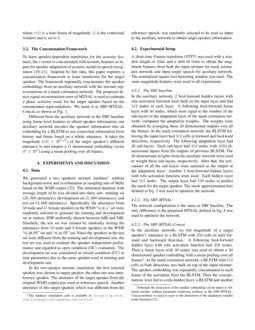 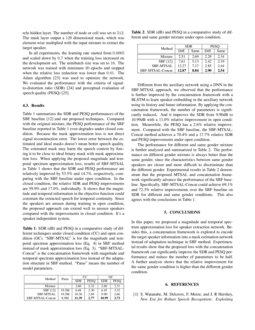 Speech is the most natural way of human-machine interface. However, the performance of speech recognition is significantly affected in face of background noise and interference speech [1, 2]. To naturally interact with machines, we hope that machine can give selective attention to the speech of interest and ignore the rest with speech separation or speaker extraction techniques.

Recent deep learning based methods, such as Deep Clustering (DC)

[3, 4, 5], Deep Attractor Network (DANet) [6], Permutation Invariant Training (PIT) methods [7, 8, 9, 10], have significantly advanced the performance of multi-taker speech separation. However, the number of speaker has to be known in prior. The PIT methods need this prior information during training. Although it’s not necessary for the DC and DANet methods in the training stage, it’s required during inference to form the clusters equal to the number of speakers in the mixture.

Since the number of speaker information is always unknown in practice, the usefulness of speech separation technique is greatly limited. To address this limitation, two research directions have been explored. The first one is to iteratively reconstruct the speech for every speaker [11]. The iteration procedure is terminated by either a stop-flag or a threshold of the residual mask. The other one is target speaker extraction that only extract the target speaker’s voice from a mixture given the speaker information [12, 13]. This technique is practical to the applications where only registered speakers need to be responded, for example, the speaker verification application [14]. The SpeakerBeam-FE (SBF) method [12] exploited a context adaptive deep neural network (CADNN) [15]

to track the target speaker with a speaker adaptation layer. A mask approximation loss is calculated between the estimated mask and ideal binary mask as the objective to train the network. However, the mask approximation loss is sub-optimal for two reasons. One is that the loss function is not directly targeting reconstruction errors. The other is that the speech context is not considered in the loss function.

To address these problems, this paper proposes a magnitude and temporal spectrum approximation loss to estimate a phase sensitive mask for the target speaker with the speaker characteristics. The loss is calculated on magnitude and its dynamic information (i.e., delta and acceleration) to constrain the extracted speech for temporal continuity. In addition, we explore a concatenation framework to encode the speaker embedding into the mask estimation instead of the adaptation structure in the SBF method. The same joint optimization strategy is applied to the auxiliary network and mask estimation network. The auxiliary network encodes the speaker information to speaker embeddings, which are repeatedly concatenated with the activations to estimate masks with the proposed loss.

Section 2 describes the speaker extraction problem with a mask. The details of the proposed magnitude and temporal spectrum approximation loss and concatenation framework are discussed in Section 3. Section 4 reports the experimental setup and results. The conclusions are given in Section 5.

2 Speaker Extraction with A Mask

where zi[n] might be any number of interference speech or background noise.

Given the mixed signal y(n) and enroll signal a(n), the goal is to estimate ^x[n] that is close to x[n]

. This problem has been formulated as a supervised learning task. It estimates a filter (i.e., mask) for the target speaker with the supervised information ( i.e., ideal binary mask (IBM) in

The extracted magnitude |^X(t,f)| of the target speaker is obtained by

where ⊙ indicates element-wise multiply. M(t,f) is the estimated phase sensitive mask (PSM) and |Y(t,f)| is the spectrogram representation of mixed signal. The phase of the mixed speech ∠Y(t,f) is used to reconstruct the time domain signal ^x[n].

The SBF method [12] uses an auxiliary network to estimate adaptation weights, which weight the sub-layers in the adaptation layer for mask estimation with a mask approximation loss. The loss is defined as,

However, the mask approximation loss is sub-optimal, because the mask approximation loss doesn’t directly reflect the signal reconstruction error between the estimated signal and the true signal. In addition, the loss between the estimated and ideal masks is computed individually without considering the context information. The continuity characteristics of speech should be used to constrain the mask estimation for temporal continuity.

where M is the estimated phase sensitive mask for target speaker. |Y| and |X| are the magnitudes of the mixture and the target speaker’s clean speech. θy and θx are phase angles of the mixture and target speaker’s clean speech. wd and wa are the weights (set as 4.5 and 10.0 in this work). fd(⋅) and fa(⋅) are the function to compute delta and acceleration. Since the acceleration computation function is computing the delta twice, we only given the delta computation function [18] as,

where v(t) is a time frame of magnitude. L is the contextual window and is set to 2.

[19, 20, 21]. Inspired by this idea, this paper explores a concatenation framework to learn transforms for the target speaker. The framework repeatedly concatenates the speaker embeddings from an auxiliary network with the mixture representations in a mask estimation network. The proposed direct signal reconstruction error of MTSAL is used to estimate a phase sensitive mask for the target speaker based on the concatenated representations. We name it as SBF-MTSAL-Concat, as shown in Fig. 1.

Different from the auxiliary network in the SBF baseline using frame level features to obtain speaker information, our auxiliary network encodes the speaker information into an embedding by a BLSTM to use contextual information from history and future based on a whole utterance. It takes the magnitude (|A|∈RT×F) of the target speaker’s different utterance in and outputs a D dimensional embedding vector (V∈RD) using a mean pooling over all frames.

32ms and a shift of 16ms to obtain the magnitude features from both the input mixture for mask estimation network and input target speech for auxiliary network. The normalized square root hamming window was used. The same magnitude features were used in all experiments.

In the auxiliary network, 2

512 nodes in each layer. A following feed-forward linear layer with 30 nodes, which were equal to the number of the sub-layers in the adaptation layer of the mask estimation network, computed the adaptation weights. The weights were obtained by averaging these 30 dimensional outputs over all the frames. In the mask estimation network, the BLSTM following the input layer had 512 cells in forward and backward directions, respectively. The following adaptation layer had 30 sub-layers. Each sub-layer had 512 nodes with 1024 dimensional inputs from the outputs of previous BLSTM. The 30 dimensional weights from the auxiliary network were used to weight these sub-layers, respectively. After that, the activations of all the sub-layers were summed as the output of the adaptation layer. Another 2 feed-forward hidden layers with relu activation function were used. Each hidden layer had 512 nodes. The output layer had 129 nodes to predict the mask for the target speaker. The mask approximation loss defined in Eq. 3 was used to optimize the network.

The network configuration is the same as SBF baseline. The only difference is the proposed MTSAL defined in Eq. 4 was used to optimize the network.

In the auxiliary network, we fed magnitude of a target speaker’s utterance to a BLSTM with 256 cells in each forward and backward direction. A following feed-forward hidden layer with relu activation function had 256 nodes. Then a linear layer with 30 nodes was used to obtain a 30 dimensional speaker embedding with a mean pooling over all frames222Although the dimension of the speaker embedding can be tuned to different number without parameter explosion problem in the SBF-MTSAL-Concat method, we keep it same as the dimension of the adaptation weights in the baseline [12].. In the mask estimation network, a BLSTM with 512 cells in both directions was built on top of the input mixture. The speaker embedding was repeatedly concatenated to each frame of the activation from the BLSTM. Then the concatenations were fed to a relu hidden layer, a BLSTM and another relu hidden layer. The number of node or cell was set to 512. The mask layer output a 129 dimensional mask, which was element-wise multiplied with the input mixture to extract the target speaker.

In all experiments, the learning rate started from 0.0005 and scaled down by 0.7 when the training loss increased on the development set. The minibatch size was set to 16. The network was trained with minimum 30epochs and stopped when the relative loss reduction was lower than 0.01. The Adam algorithm [23] was used to optimize the network. We evaluated the performance with the criteria of signal-to-distortion ratio (SDR) [24] and perceptual evaluation of speech quality (PESQ) [25].

Table 1 summarizes the SDR and PESQ performances of the SBF baseline [12] and our proposed techniques. Compared with the original mixture, the PESQ performance of the SBF baseline reported in Table 1 even degrades under closed condition. Because the mask approximation loss is not direct signal reconstruction error. The lower error between the estimated and ideal masks doesn’t mean better speech quality. The estimated mask may harm the speech context by forcing it to be close to ideal binary mask with mask approximation loss. When applying the proposed magnitude and temporal spectrum approximation loss, results of SBF-MTSAL in Table 1 shows that the SDR and PESQ performance are relatively improved by 53.5% and 14.7%, respectively, comparing with the SBF baseline under open condition. In the closed condition, the relative SDR and PESQ improvements are 59.9% and 17.0%, individually. It shows that the magnitude and temporal information in the objective function could constrain the extracted speech for temporal continuity. Since the speakers are unseen during training in open condition, the proposed approach can extend well to unseen speakers compared with the improvements in closed condition. It’s a speaker independent system.

Different from the auxiliary network using a DNN in the SBF-MTSAL approach, we observed that the performance is further improved by the concatenation framework with a BLSTM to learn speaker embedding in the auxiliary network using its history and future information. By applying the concatenation framework, the number of parameters is significantly reduced. And it improves the SDR from 9.90dB to 10.99dB with a 11.0% relative improvement in open condition. Meanwhile, the PESQ has a 2.6% relative improvement. Compared with the SBF baseline, the SBF-MTSAL-Concat method achieves a 70.4% and a 17.7% relative SDR and PESQ improvements under open condition.

The performance for different and same gender mixture is further analyzed and summarized in Table 2. The performance on different gender mixture is always better than the same gender, since the characteristics between same gender speakers are closer and more difficult to discriminate than the different gender. Experimental results in Table 2 demonstrate that the proposed MTSAL and concatenation framework significantly advance the performance of the SBF baseline. Specifically, SBF-MTSAL-Concat could achieve 69.1% and 72.3% relative improvements over the SBF baseline on SDR for different and same gender conditions. This also agrees with the conclusions in Table 1.

In this paper, we proposed a magnitude and temporal spectrum approximation loss for speaker extraction network. Besides this, a concatenation framework is explored to encode the target speaker information into a mask estimation network instead of adaptation technique in SBF method. Experimental results show that the proposed loss with the concatenation framework can significantly improve the SDR and PESQ performance and reduce the number of parameters to be half. A further analysis shows that the relative improvement for the same gender condition is higher than the different gender condition.